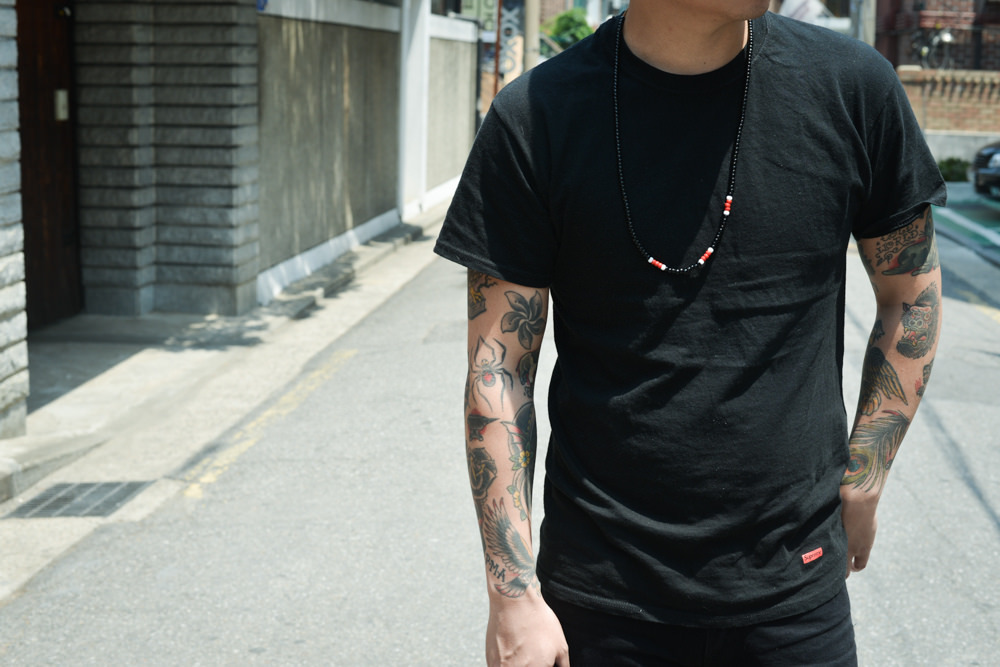 Plain white tshirts are unassailable. A perfect symbol of the 20th century’s march toward the casual and elevation of what had been hidden from sight forever–literal underwear. For years, we’ve sold Alternative Apparel’s white (and heather gray) tshirts to Put This On readers at discount to make sure everyone has their need for this most basic of basics met.

Another basic truth I’ve come around to over the years: I don’t look great in a plain white tshirt. Only the beefiest–like Camber beefy–works for me, everything else I’ve tried is just too sheer. I don’t even buy white graphic tshirts or band tshirts anymore. But I wear plain tshirts all the time: in the summer with other, louder items, or in cooler seasons with denim or leather jackets. So I’m always on the hunt for good, blank shirts, and I have a giant pile of knit cotton to prove it. I’ve had cotton and blend tees from Alternative and American Apparel. I like J. Crew’s pocket tshirts in assorted colors (although fit varies from season to season), I like Uniqlo’s oversized pocket tees (unfortunately not currently available), among others. Last year, I even tried out Supreme’s Hanes black tshirts, well aware that they were just basic department store undershirts with a small printed box logo–the mark of the (hype)beast. To my genuine surprise, I really liked them. They’re neither heavy nor thin, the crewneck band holds up in the wash (i.e., doesn’t warp or stretch), and they look great with an olive drab jacket and jeans.

Now, as far as I can tell, other than the tiny logo at the hem, there is nothing special about Supreme’s Hanes tshirts, vs Hanes’s normal ComfortSoft tagless shirts, the ones you can find at Target or KMart. The fit seems the same–fitted but not tight, with a shoulder seams slightly dropped, and tubular (no side seam) construction. The fabric seems the same. You don’t need to line up in the cold or code a bot to buy the Supreme version; it’s not expensive and rarely sells out. At $24 for three, that’s $8 a shirt. A decent deal!

But you can do better. Hanes’s black ComfortSoft tshirts are currently $9 for a 4-pack. That’s $2.25/shirt. That’s 9 quarters. That’s gotta be the cheapest thing I’ve ever recommended on Put This On. Merry Christmas.

Filed Under: Everyday Style, Hanes, T-Shirts, Things We Love, What You Can Really Afford