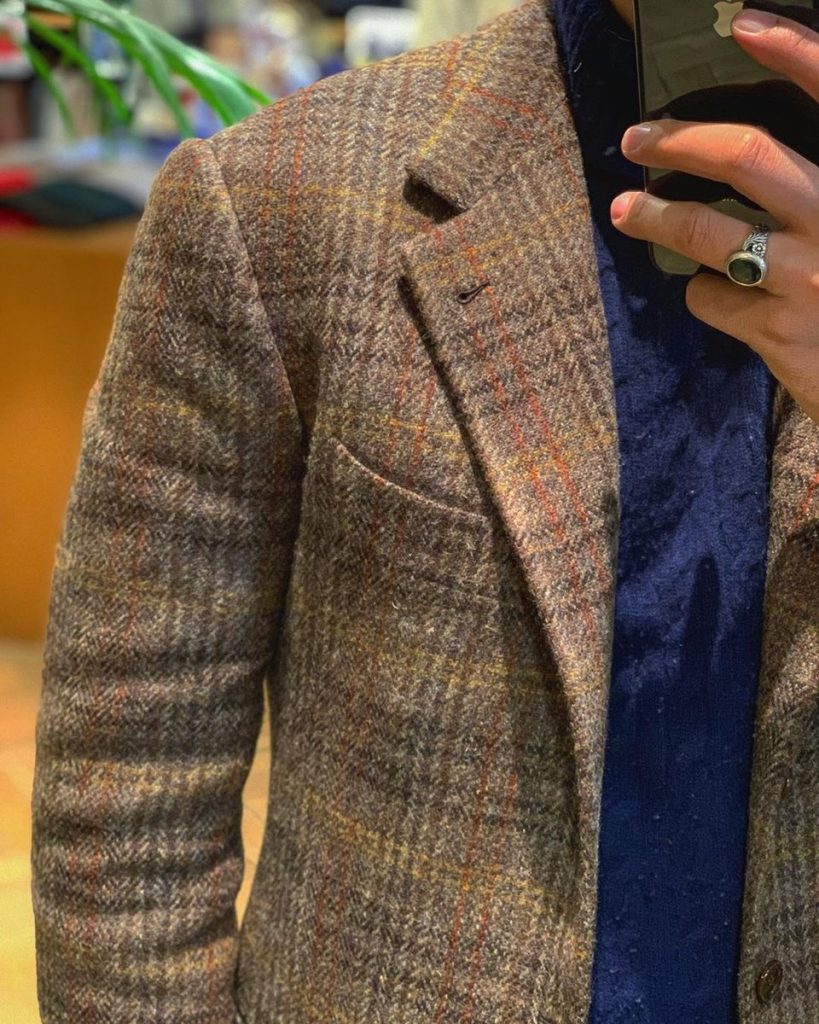 I was talking with a friend yesterday about the merits of extended shoulders. My friend, a dyed-in-the-wool trad who grew up on Brooks Brothers and penny loafers, believes that tailoring should always look natural. Extended shoulders, for him, are an artifice — bad, ugly, against nature, and a fakery that reveals itself whenever the wearer moves.

I, on the other hand, not only think extended shoulders are good, but that everyone should wear them. You should, your mother should, and generations from now, your descendants should. Extended shoulders are one of the easiest ways to give yourself more flattering proportions, slimming the waist by making the chest and shoulder line look broader by comparison.

Before I go on, I should lay out some terms. Nearly every tailored jacket is made from multiple layers of material. If you were to pick apart the shoulder seam, you’d find two things underneath — a shoulder pad that stretches across the length of the shoulder, and a bit of wadding at the end that cusps the wearer’s shoulder bone. These two things are present in almost every suit jacket or sport coat, but they’re especially crucial to those with extended shoulders. Without any structure underneath, the excess cloth at the end would just collapse (much like my friend’s argument when pushed).

Strictly speaking, a narrow shoulder is one where the shoulder seam falls right on the end of your shoulder bone, whereas an extended shoulder stretches past it. How much is a matter of degree and taste, but I think almost everyone could benefit from a bit of extension. 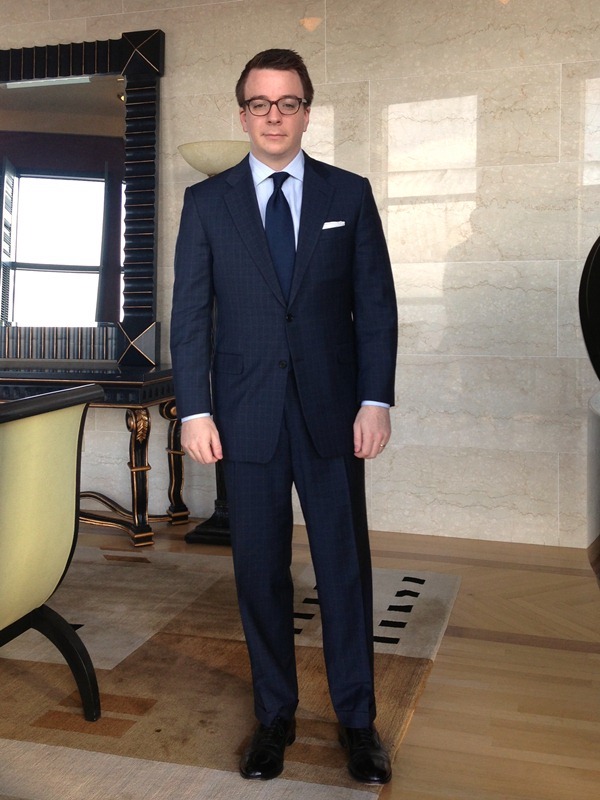 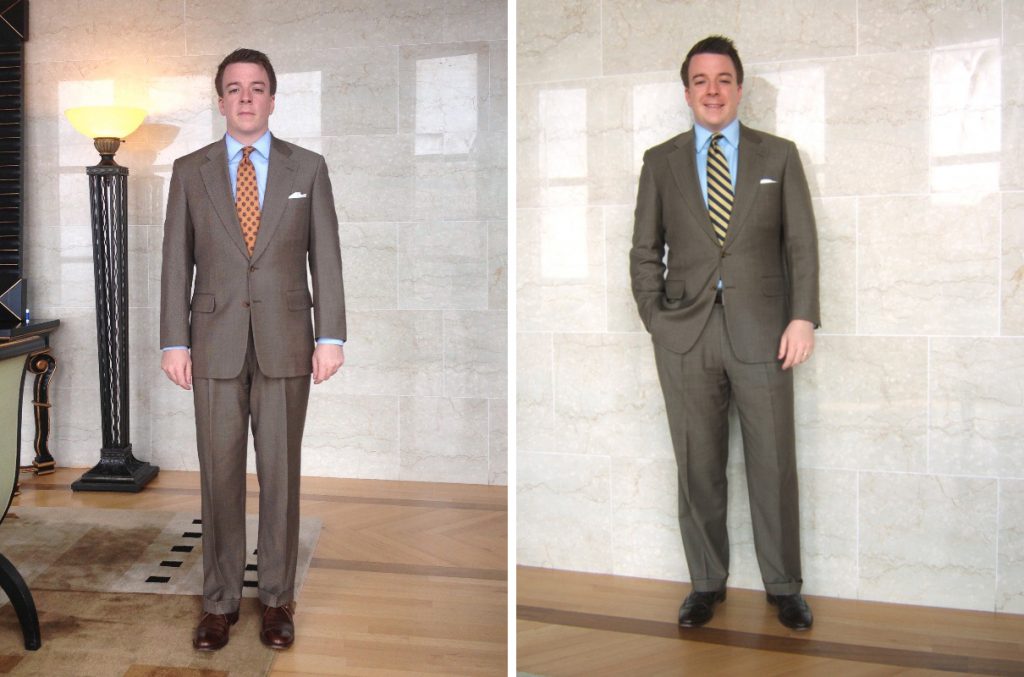 Let’s start with a baseline. Jeff, who used to write the blog The Thrifty Gent, is an Ivy Style enthusiast who favors Brooks Brothers’ natural shoulder line. This shoulder is neither narrow or extended — it’s middle-of-the-road, sensible, and unimpeachable. Jeff’s suits are professional, but also not overly stiff and padded. Classic is an overused term in menswear writing, but Jeff’s outfits show that some things do really age well (he’s been posting these same outfits for about ten years, maybe longer). To be clear, there’s nothing wrong with this silhouette. It’s great. 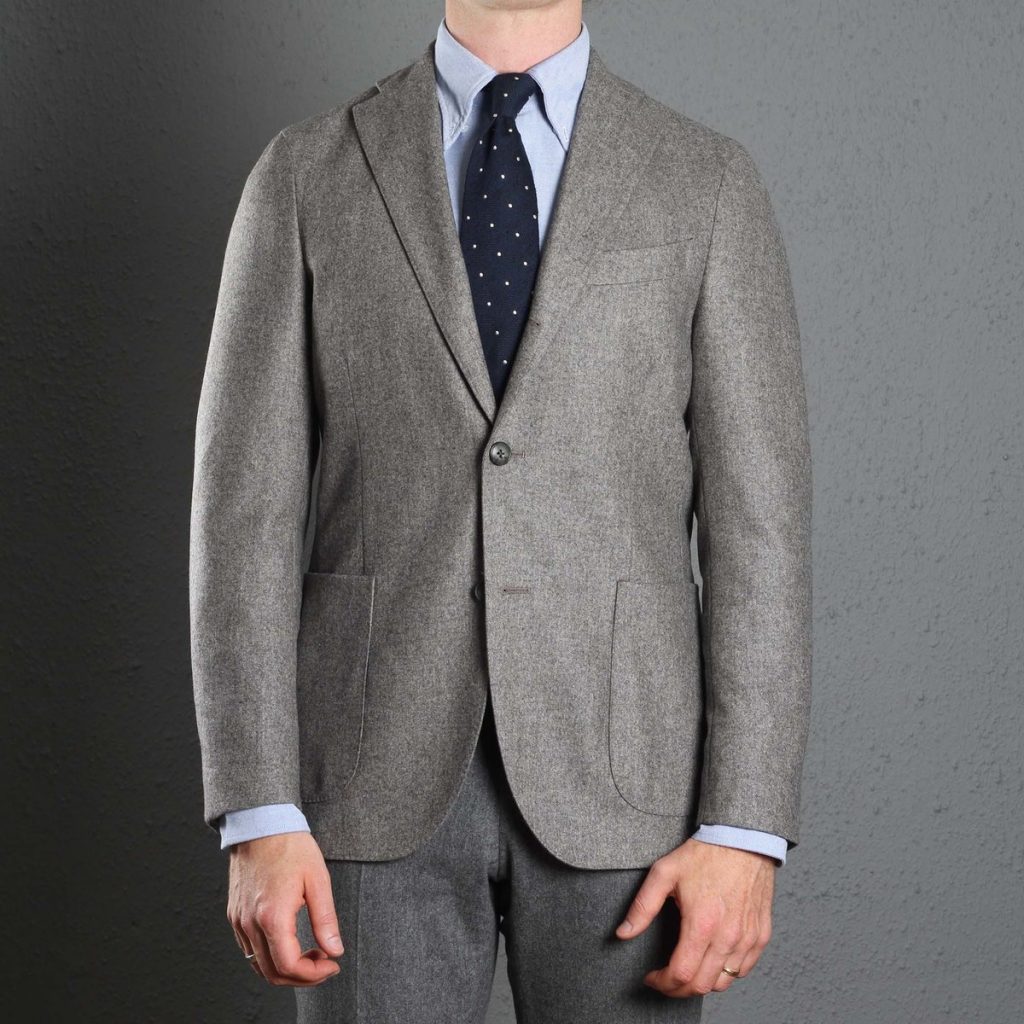 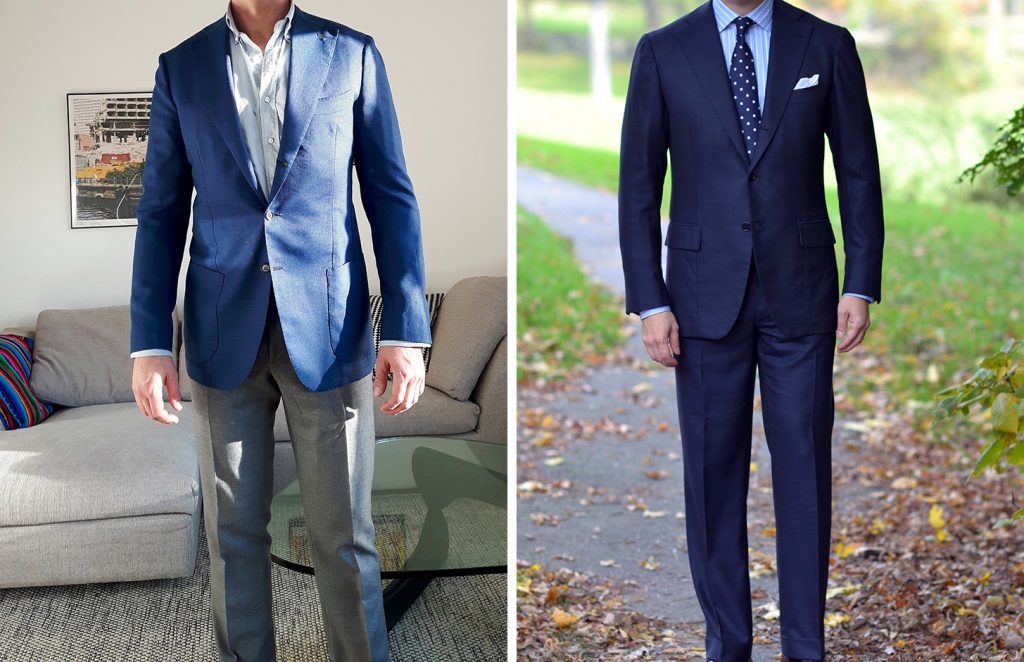 Most natural shouldered folk, however, aren’t wearing Brooks Brothers. Instead, many are wearing Italian clothes influenced by the hashtag menswear movement, or possibly neo-prep. These jackets are often even softer and more deconstructed. And since the shoulder line has minimal padding and wadding, the shoulder seam has to end right at the shoulder bone.

You can see an extreme version of this on the grey jacket above. Ignore the overly short sleeves, truncated coat, and high buttoning-point. Instead, pay attention to the shape of the upper chest. The soft, sloping shoulders terminate right at the end of the shoulder bone, making it look like a shirt’s shoulder line.

The two photos below that are a bit more classic and flattering to the wearers (both the blue sport coat and blue suit were made by the same Italian tailoring company). But even in these cases, you can see the importance of body type. The man on the right has an athletic build (you’ll have to trust me on this). With a naturally broad chest and shoulder line, this type of tailoring can look great because your body already gives you a V-shaped figure. The man on the left, on the other hand, has less of an athletic build, although he’s still slim and in-shape. With less traditionally “idealized” body types, this type of soft tailoring may look less flattering — your body is what will give the garments their shape, for better or worse. 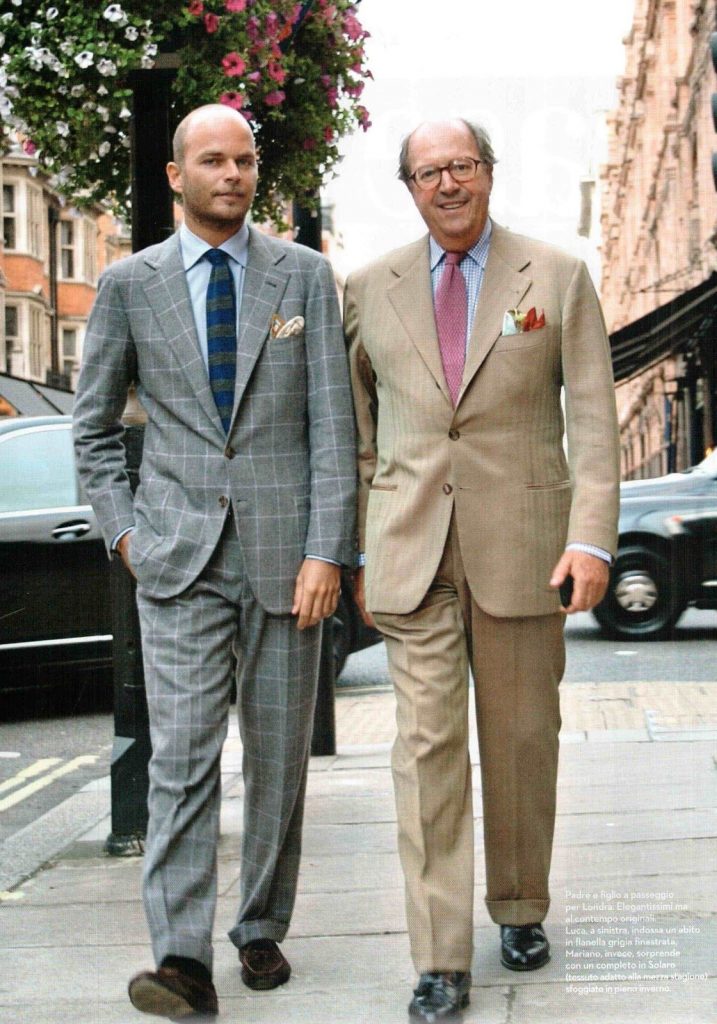 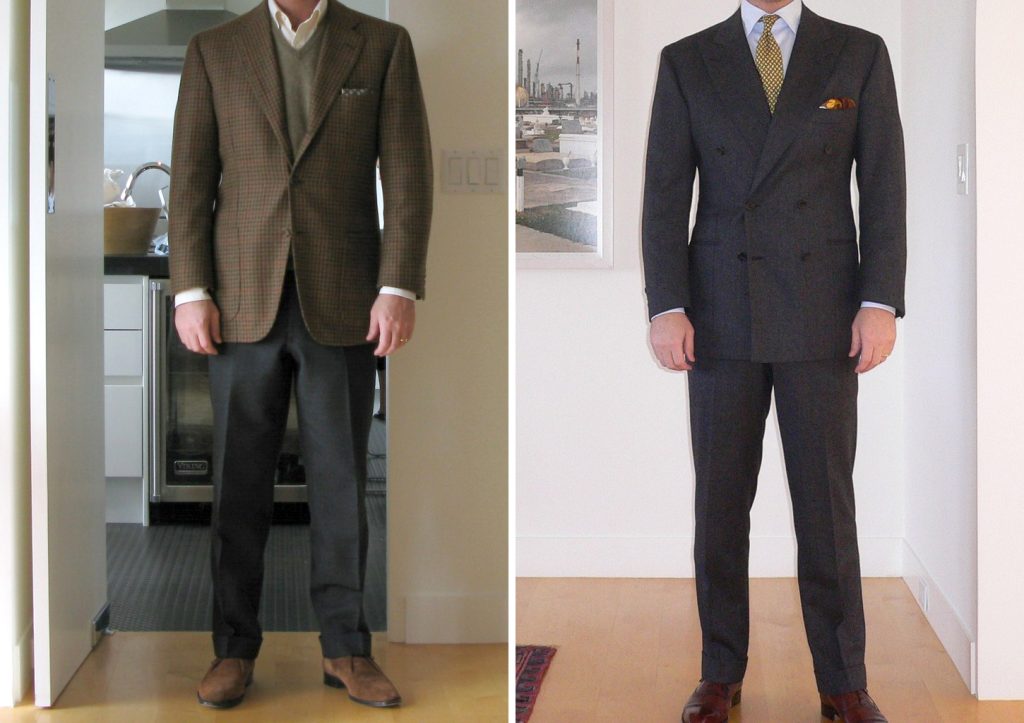 See the magical transformation that happens when you add a little breadth to the shoulder line. The very stylish Mariano Rubinacci, who runs the Rubinacci tailoring house in Naples, often wears an extended shoulder. At his age, we can assume he doesn’t have a naturally athletic figure, but the extension gives his tan summer suit some shape. Without it, the drop between his shoulder line and waist presumably wouldn’t be as dramatic.

He does the same for some of his customers. In the two other photos, you can see StyleForum poster Iammatt, who’s wearing a brown sport coat and grey double-breasted suit from Rubinacci. Both garments have a bit of shoulder extension (again, I realize it’s hard to judge this online, but you’ll have to trust me). By extending the shoulder, you get a much more flattering V-shaped figure. This isn’t to say that that classic male silhouette is the only way to look good, but in traditional men’s tailoring, it’s still the template.

For men who don’t have a lean, athletic build — where your shoulder line is broader than your waistline — an extended shoulder can be a Godsend (I say this without judgment because, my non-athletic friends, I stand with you). It helps broaden out the chest and makes the waist look slimmer by comparison. It’s a strong, traditionally masculine look. It helps give your suits and sport coat some shape, especially if you find you can’t take the waist in any further. Most of all, it helps avoid the dreaded pear-shaped figure. 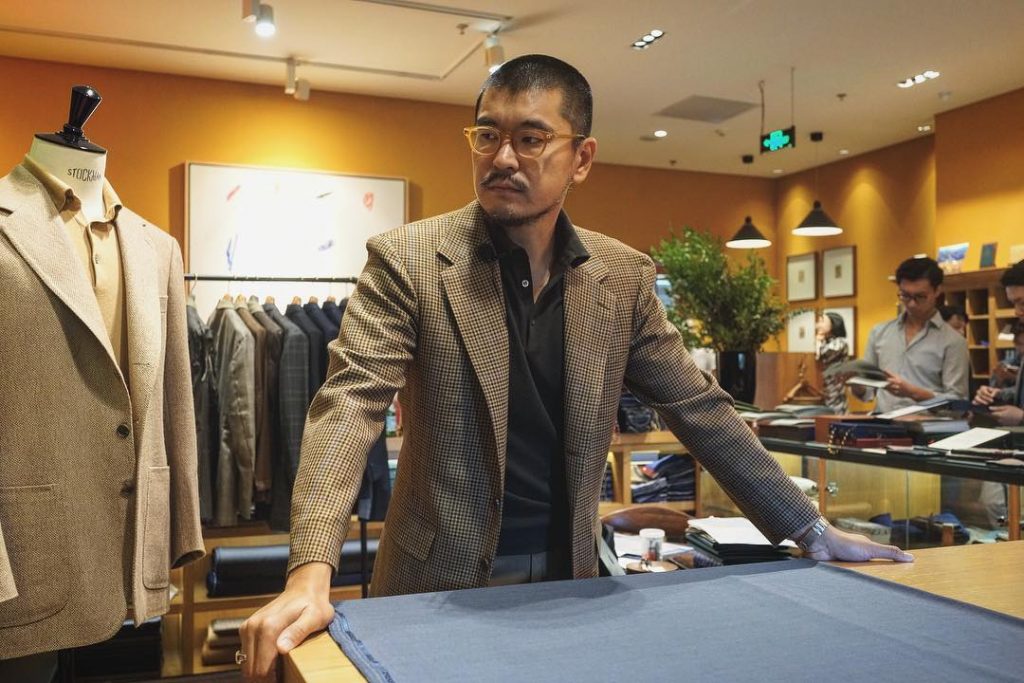 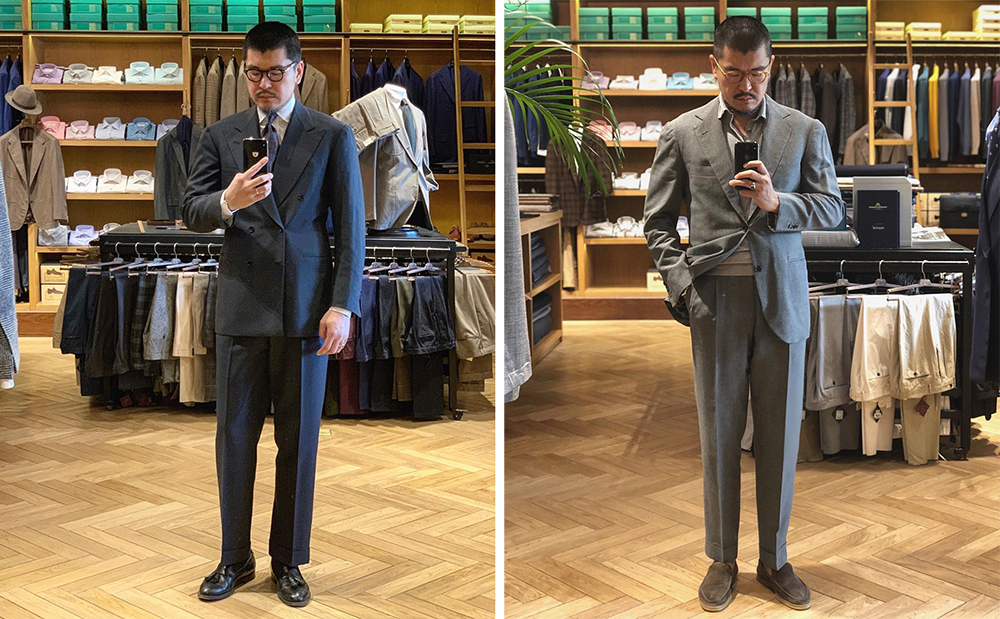 Extended shoulders can even look good on men with naturally broad shoulders. George Wang, who runs the Beijing-based menswear shop BRIO, gets almost all his clothes custom-made. And despite having an already athletic build, he almost always asks for an extended shoulder line because he likes that kind of silhouette. To be sure, when you broaden already broad shoulders, the effect can look very striking. It may not work for very conservative business environments, but it’s hard to argue with the style. George’s outfits have verve. 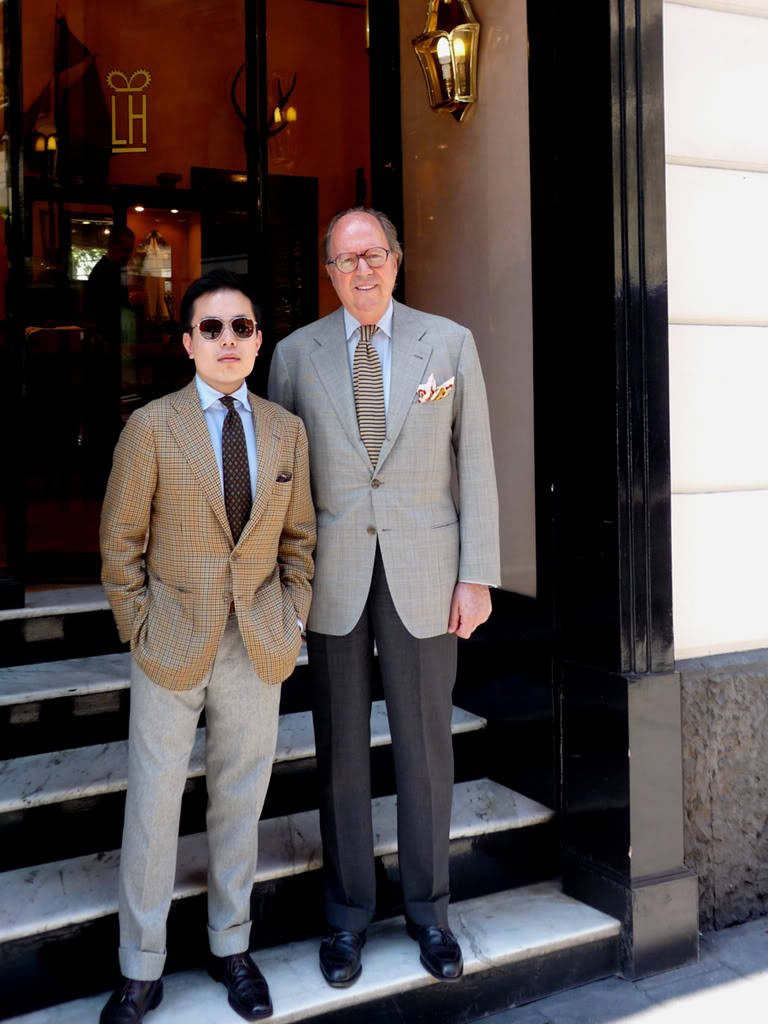 I’ve only ever heard two good arguments against extended shoulders. The first is that, in certain positions, the extension can reveal itself. If you’re sitting with your shoulders hunched forward, for example, the shoulder line won’t curve as easily with you. Sometimes, you get a bit of dimpling around the sleevehead, which reveals the extra room. No big deal, I say.

The other argument has to do with time. With enough time and wear, the ends of the shoulder can collapse as the wadding loses its shape. This is especially true of softer coats, where the wadding starts off less stiff. You can see this on Mariano’s grey sport coat above, which look a little lumpy towards the ends. But this process takes decades and if the effect really bothers you in thirty years, you can purchase new clothes. Again, no big deal, I say.

The important thing to realize about the extended shoulder is that it’s about trade-offs. While it may look fake in certain positions, the overall effect is flattering. In the video above, you can see The Armoury explain their Ring Jacket collection. The Japanese suit maker is most known for its 184 model, which is a trim, minimally padded jacket with a narrow shoulder line. You can see Jan wearing the model above as a navy sport coat.

On the right, he’s wearing The Armoury’s Model 3 as a grey suit. It has a bit more room in the chest and a slightly extended shoulder that goes past the shoulder bone. To my eye, it’s much more flattering. The navy sport coat wears more like a cardigan, while the grey suit looks like an actual jacket. Who needs to exercise when a jacket can be so transformative? 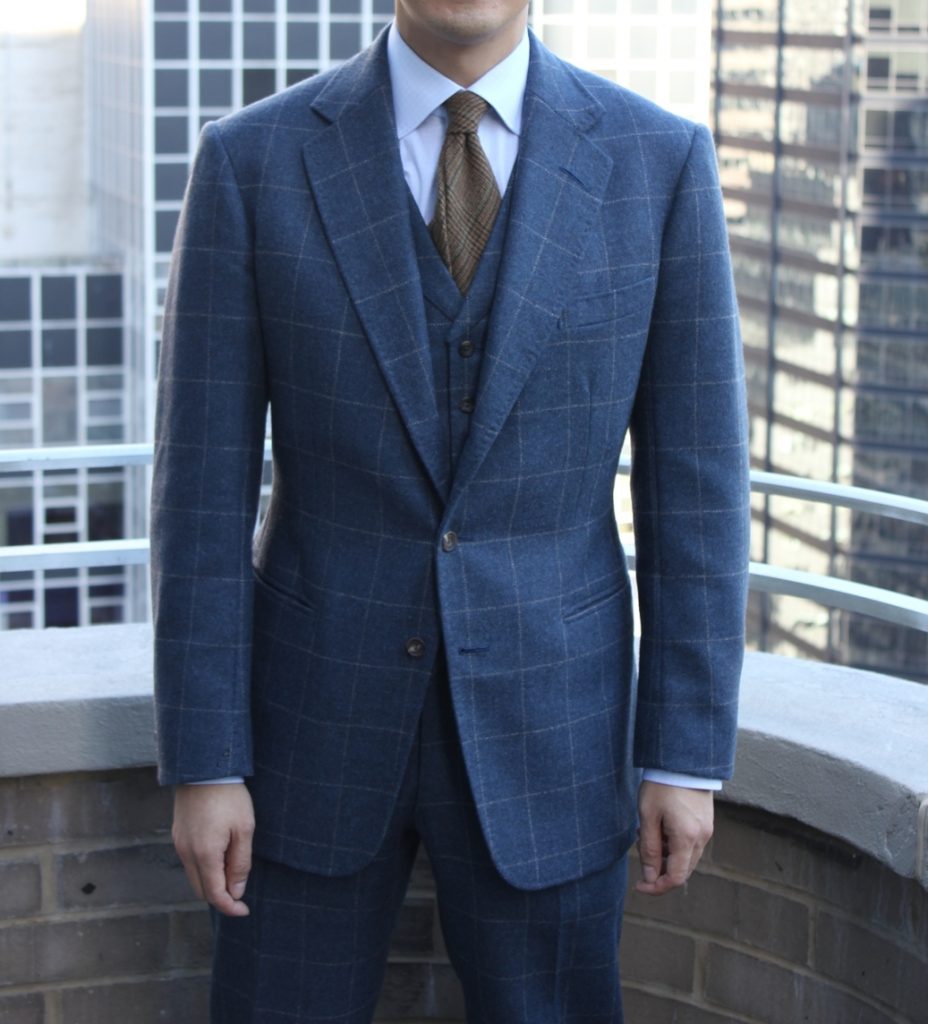 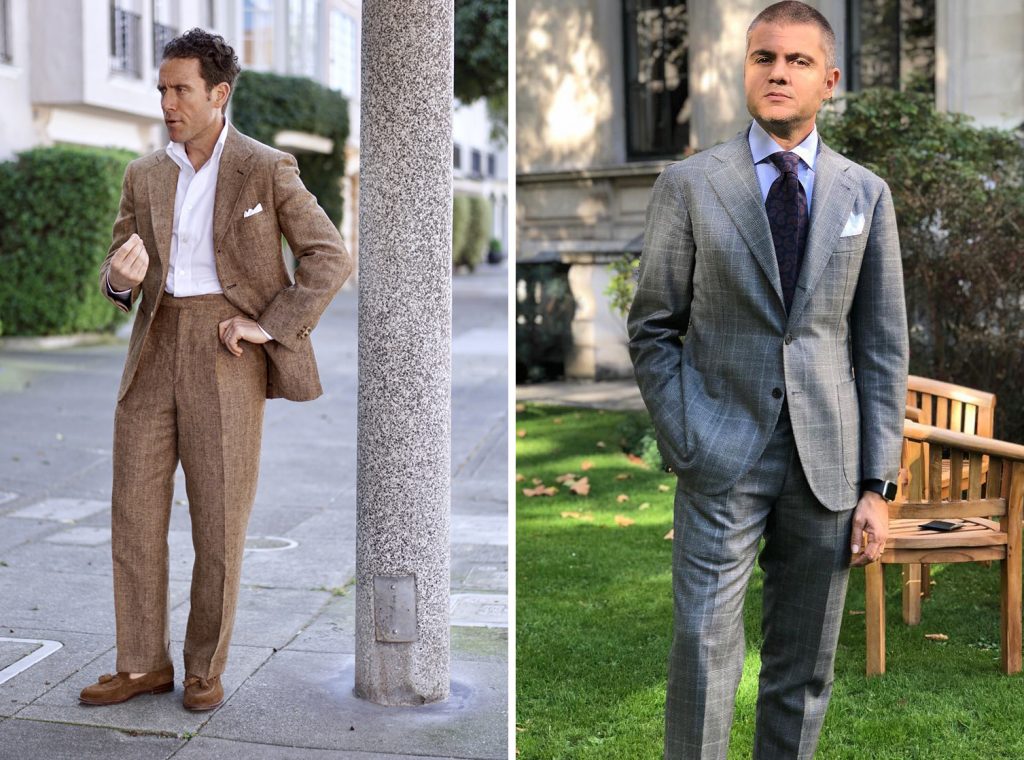 Here’s my ultimate point: whether you wear an extended shoulder or not, I encourage you to think about clothes more in terms of shape and silhouette, rather than strict notions of fit. To be sure, fit is essential — a jacket’s collar should hug your neck, the sleeve should reveal a bit of shirt cuff, and a jacket should be a certain length. But that’s just the baseline.

Style, in the end, is more about the overall effect of an outfit. You want your clothes to flatter your body, not recreate it’s shape. It’s OK to have a shoulder seam that sits off the shoulder bone if, in the end, it creates a more stylish effect. For more on silhouettes, we have two posts on how to think about the concept in tailoring and casualwear. We also have a review of various silhouette styles across regions, and a post on different house styles from six world-class tailors. The whole point of tailoring is that we can wear things to give ourselves a more flattering figure. Extended shoulders are just the most obvious example. 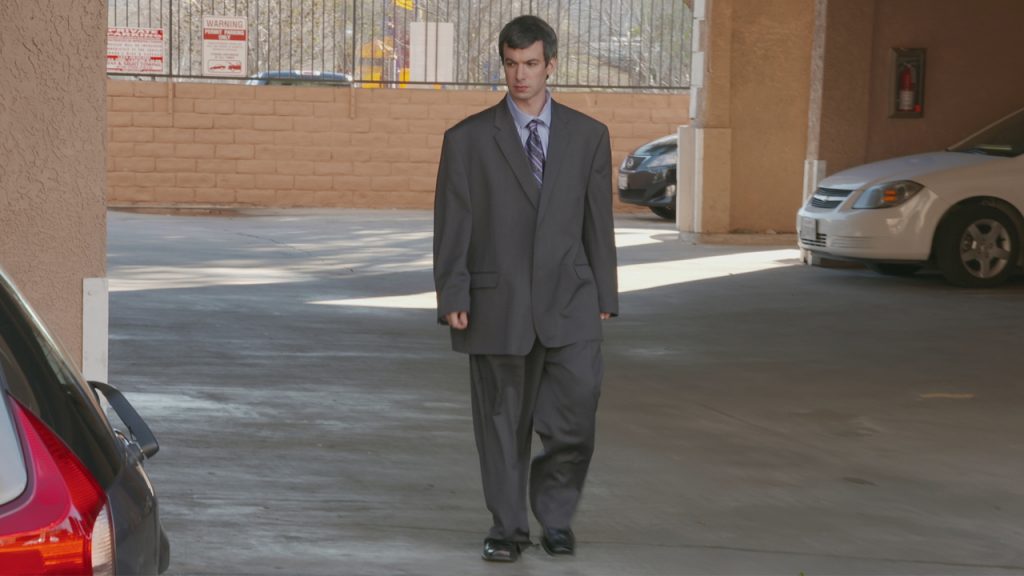