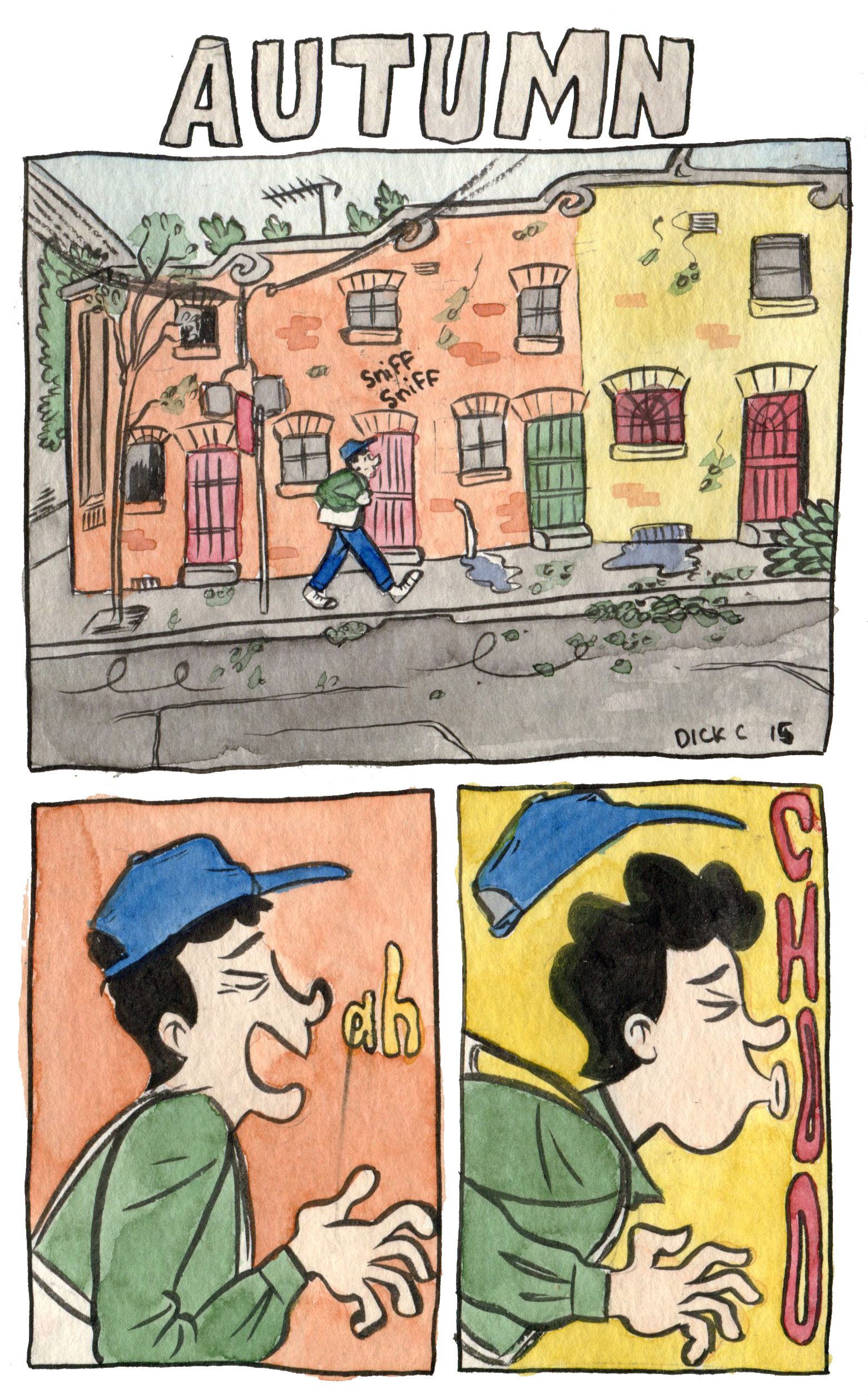 I love the thoughtful everydayness of Put This On’s Style and Fashion Drawings series, currently written and illustrated by artists Ryan Cecil and Dick Carroll. Moreso than our guides, how-tos, profiles, or inspiration, the weekly comics offer vignettes on style in real life, as well as reportage and illustrations of Ryan’s and Dick’s (excellent) personal tastes. It helps that the comics look rad — both guys are skilled, trained artists with distinct styles. I’m frankly fortunate to be associated with their work in any way!

Dick is in the process of publishing three books of his personal comics work under the title Yeah, Nah, and is funding the project via Kickstarter. He’s been drawing comics his whole life, and his work is grounded in the world of independent comics — in the tradition of post-golden-age comic books, where artists took the form established by superhero comics for kids to instead tell more personal stories about more quotidian, grown-up topics, and satire. The Yeah, Nah comics are not necessarily style-focused, like his work for Put This On, but the look and tone will be familiar to fans of his PTO pieces. 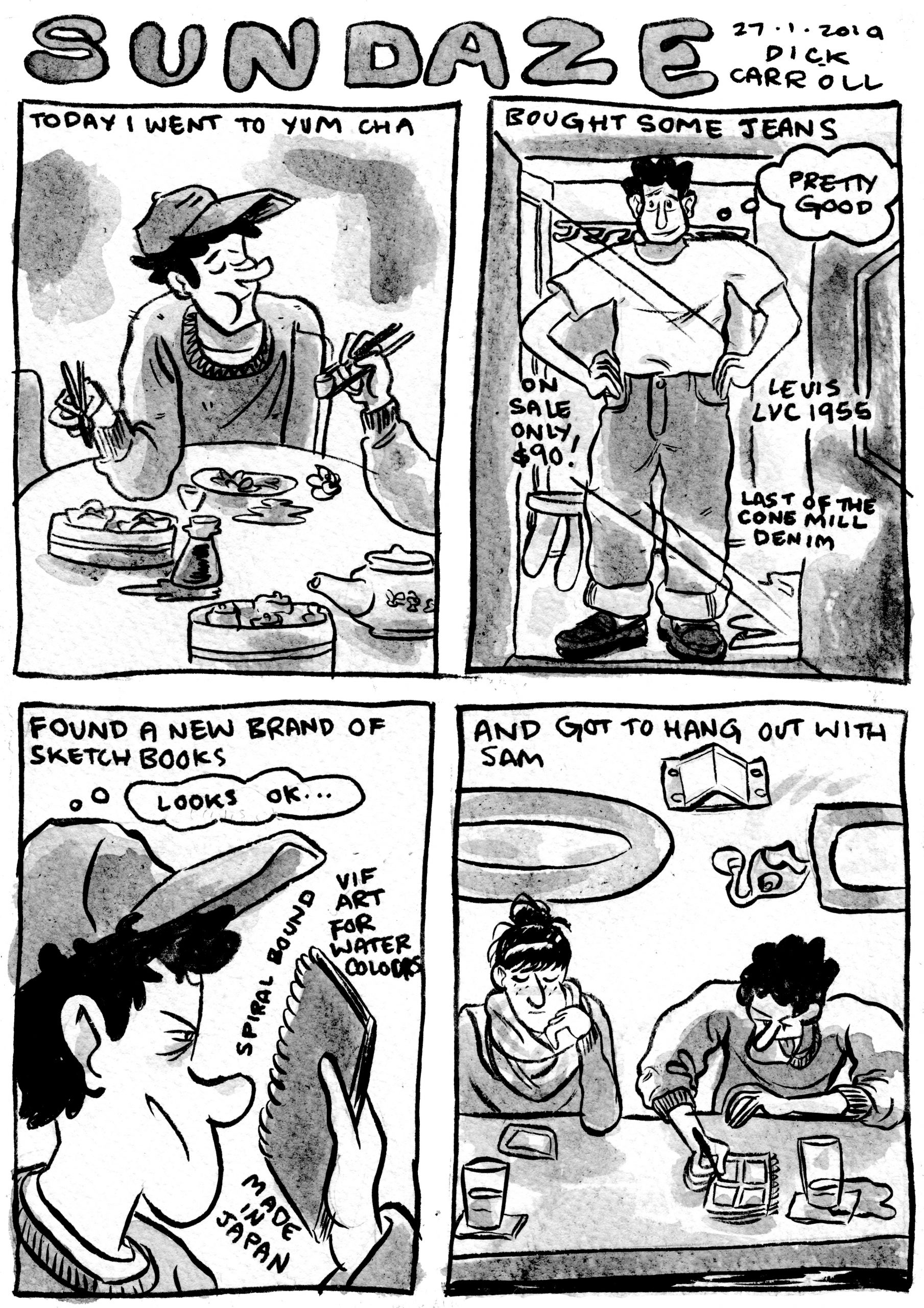 Dick talked to me a bit about his work here and Yeah, Nah. “I see it sort of as a continuation of the sort of column you’d see in old menswear magazines. They’re not really about anything. If you read one or two you’d say ‘what the fuck is this?’ but once you’ve read quite a few you get quite a nice view of the person. They’re really the best part of those old magazines.”

In pre-pandemic times, Dick (who works at the Armoury in TriBeCa) spent a lot of time at cafes, bars, and on the street in New York, observing and drawing in sketchbooks. The topics of his day-to-day work vary from diary-like slices of life — the comics cover the period during which Dick graduated from art school in Sydney and moved to NY — to overheard conversations at the bar. The Kickstarter comics (Yeah, Nah issues, 2, 3, and 4 — issue 1 was published years back) “are all the comics for the past four years.” Each book is about 40 pages each. 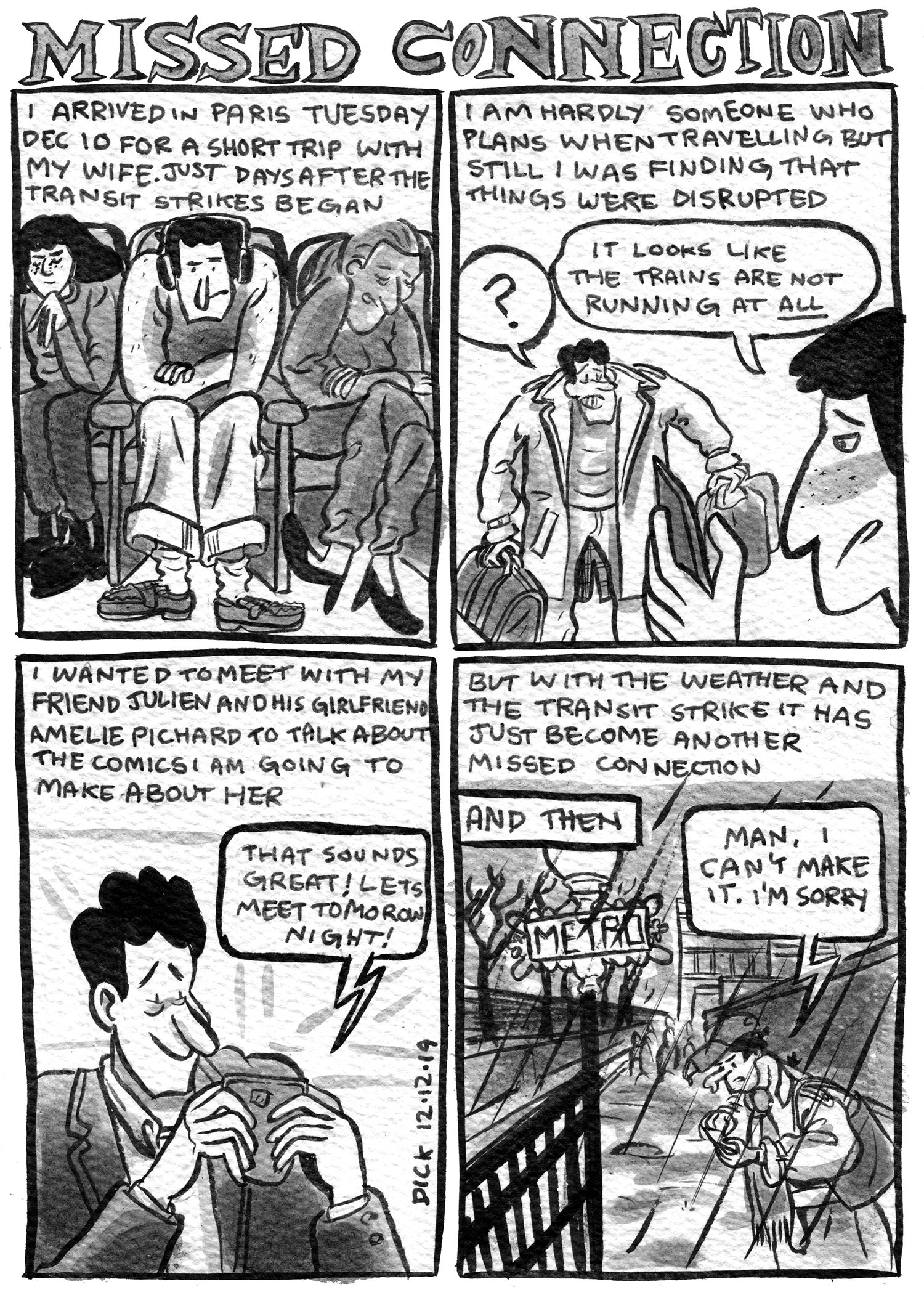 The tone is self-deprecating, and the humor character-driven and dry. The art, which reminds a bit of me of newspaper comics and caricature, varies a little from issue to issue — issue 2 is full color and reminds me a bit of midcentury graphics — bright colors and lettering especially. The other issues are black and white — Dick mostly sketches while he’s out and adds ink later. The sizes vary a bit, too, but are all around 6×9, relatively faithful to the sketchbooks they came from, rather than drawn large and printed smaller. “Normally in classic old-school comics you’d draw ‘twice up’ or 2.5 times up, but I was really inspired by an exhibit on Art Spiegelman, who wrote Maus. The pages were just so small, and I was really inspired by that. I like to reproduce at pretty close to the original size, so you can see all the mistakes. Shrinking it down makes it feel a bit too clean.”

Dick also has a Patreon where you can support him in exchange for access to the comics pages as he makes them, vs. waiting for a print run like the one he’s planning right now. “I’ve had issue 2 ready to go for a while, but in the pandemic, there was a full 3-month period when I just didn’t leave the house. I went through and finished the drawings at that time. A lot of these comics would have been just pencils in my books.” While pandemic safety has limited his cafe-sitting, Dick has continued to draw. “I can still go for walks now. And there are more kooks than ever outside.” 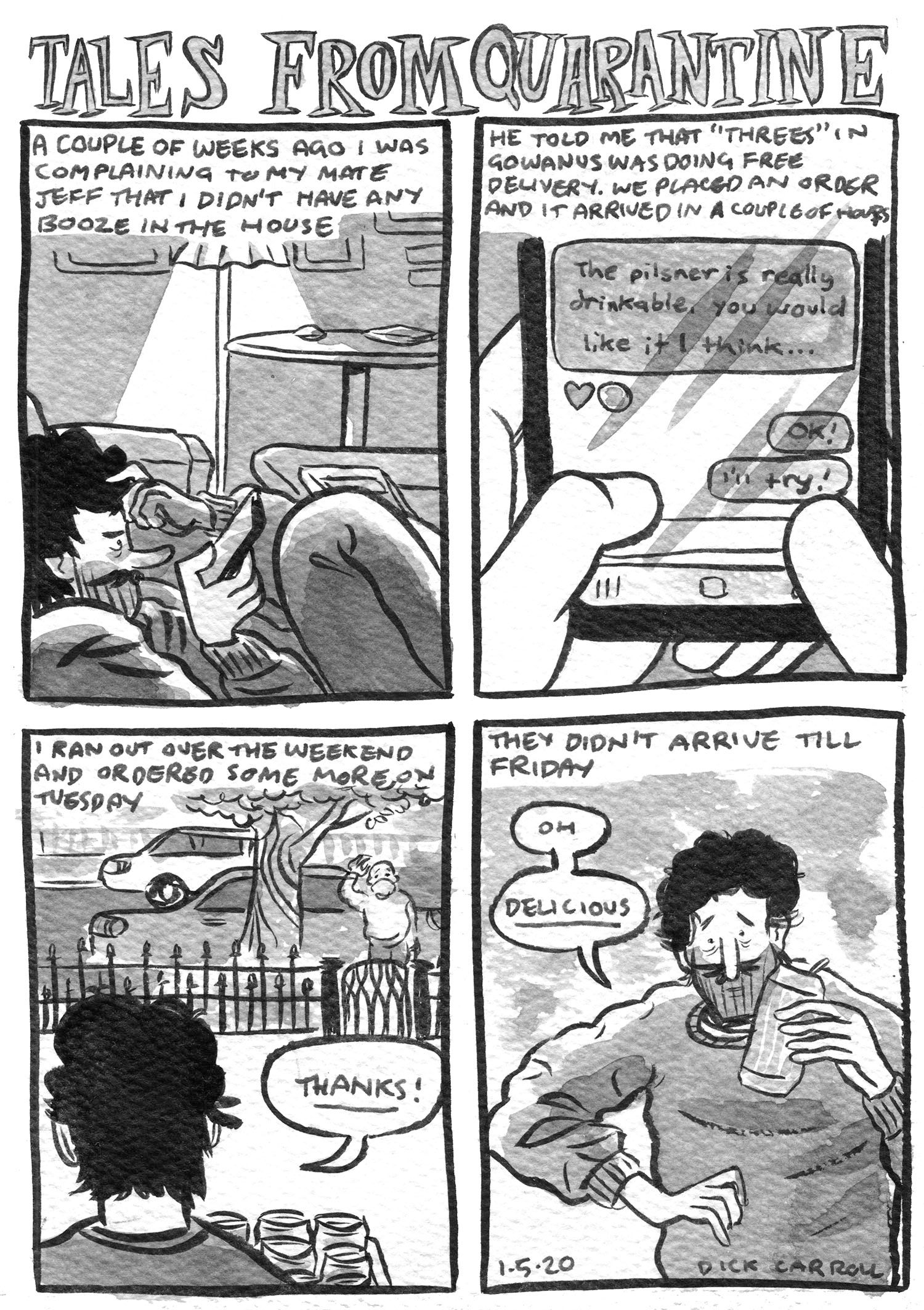 Dick has several levels of support on the Yeah, Nah Kickstarter. Backers can opt to just support the project, get individual issues, stickers, and/or a pin,  and even sketches, prints, or an original drawing. 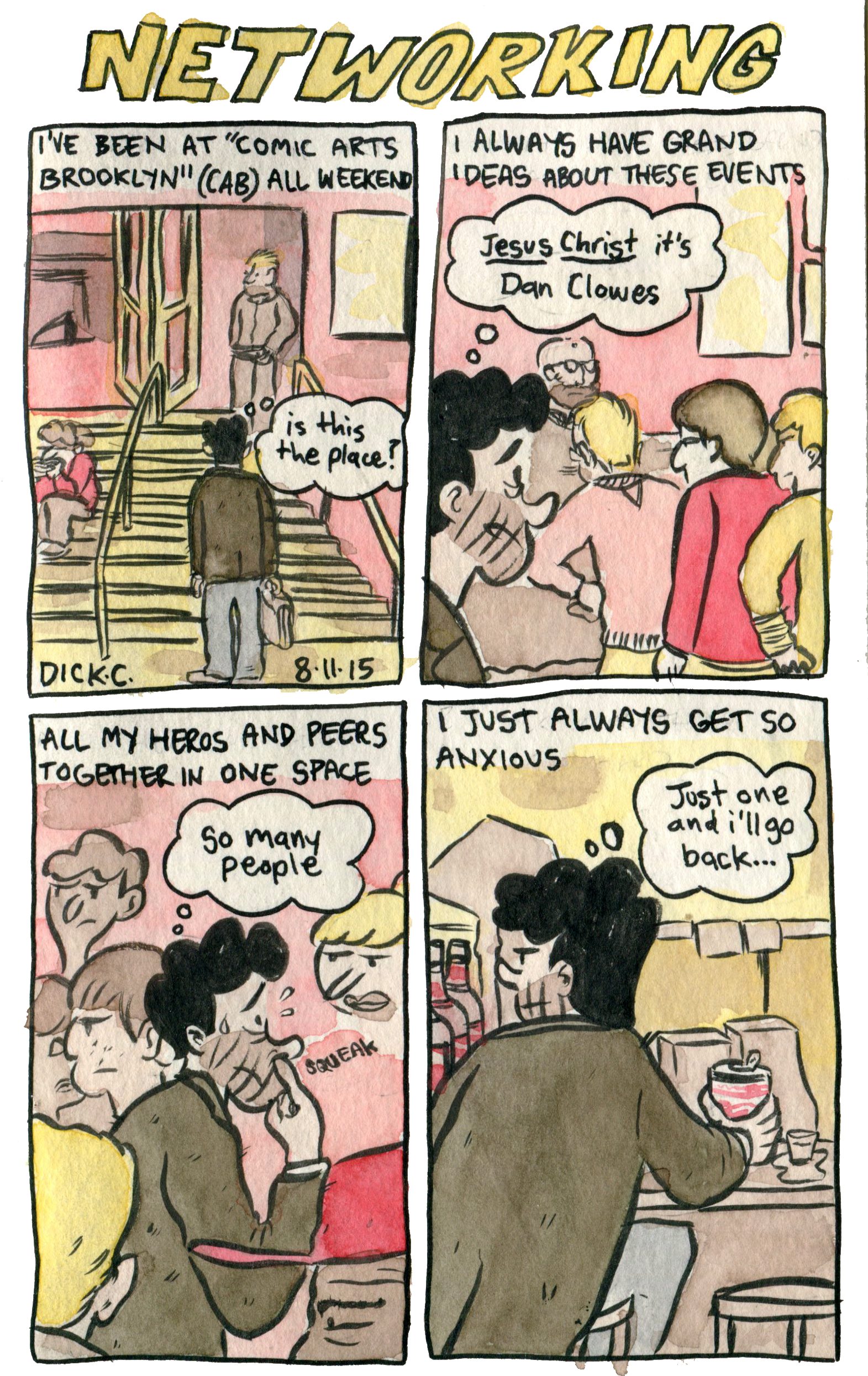