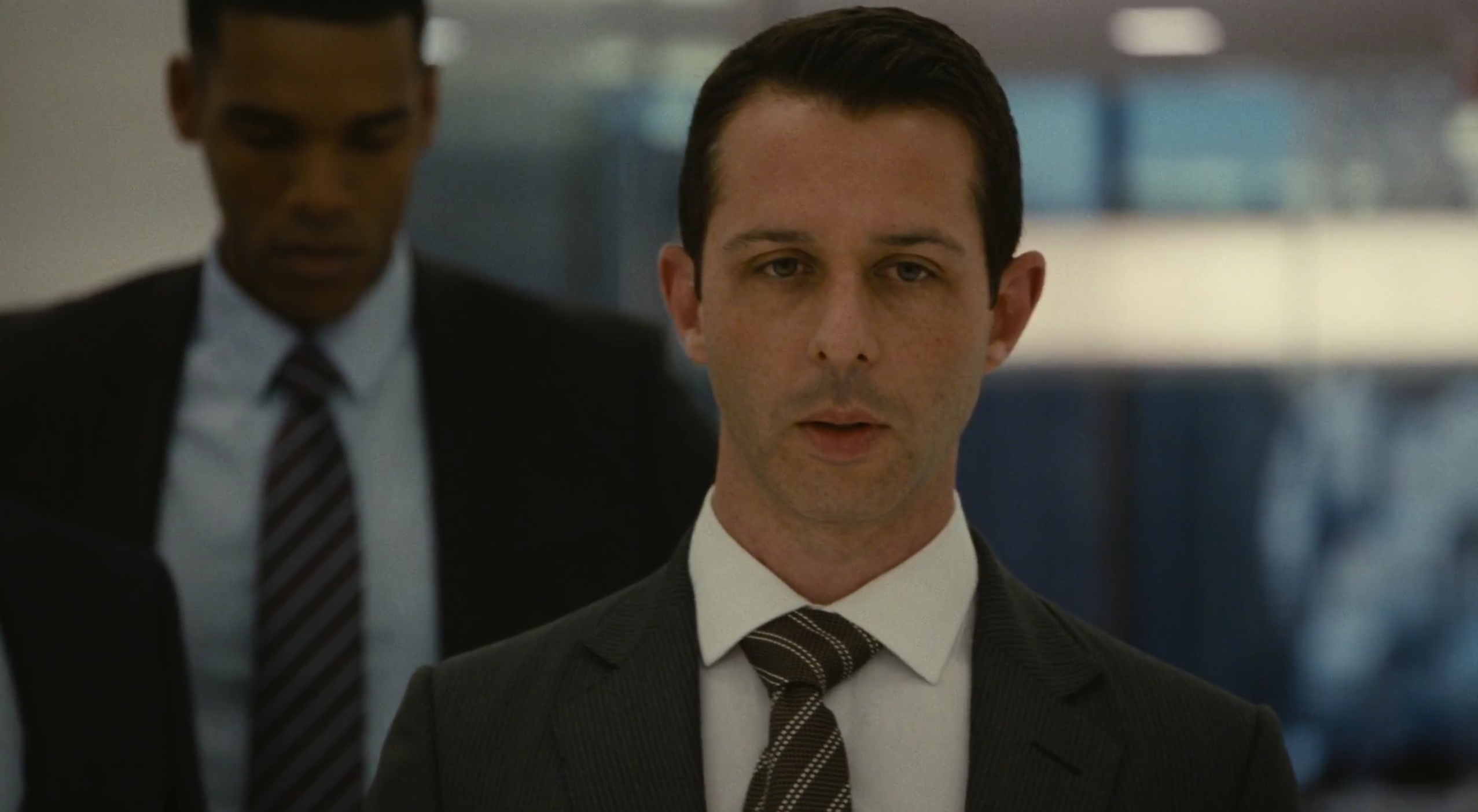 There’s a scene in Succession’s second season, in episode 2, where born-to-money Shiv (played by Sarah Snook) and her brother Roman (Kieran Culkin) gang up on Shiv’s husband, Tom (Matthew Macfadyen), at dinner. Their target? His suits.

“Where do you buy your suits, by the way, Tom?” asks Roman, innocently enough — although at this point in Succession, you know Roman’s a bully, and when a bully asks an innocent question, beware. “Maybe that’s why I’m not moving as fast as you. I just don’t have that boxy, corporate look.”

“We’ve laughed about it before,” says Shiv with a conspiratorial smile, before Tom can respond. “He’s thrifty and he has the worst taste in suits.” They’re being playful but mean.

“Hey,” I thought, “Stop roasting Tom’s suits. His suits look FINE.” Through a season and some, of all the characters on the show, I dug Tom’s suits the most. They seemed well-tailored. He wore them with shirts with proportionate collars and solid knit ties knotted with a four in hand. The suits were neither skinny nor particularly, in my opinion, boxy. They sat nicely on his shoulders and didn’t gap at the neck or spread at the waist. Separately, this character vocally endorsed Crockett & Jones cap-toes as business shoes! On national television. Damnit, Tom’s suits are just fine. 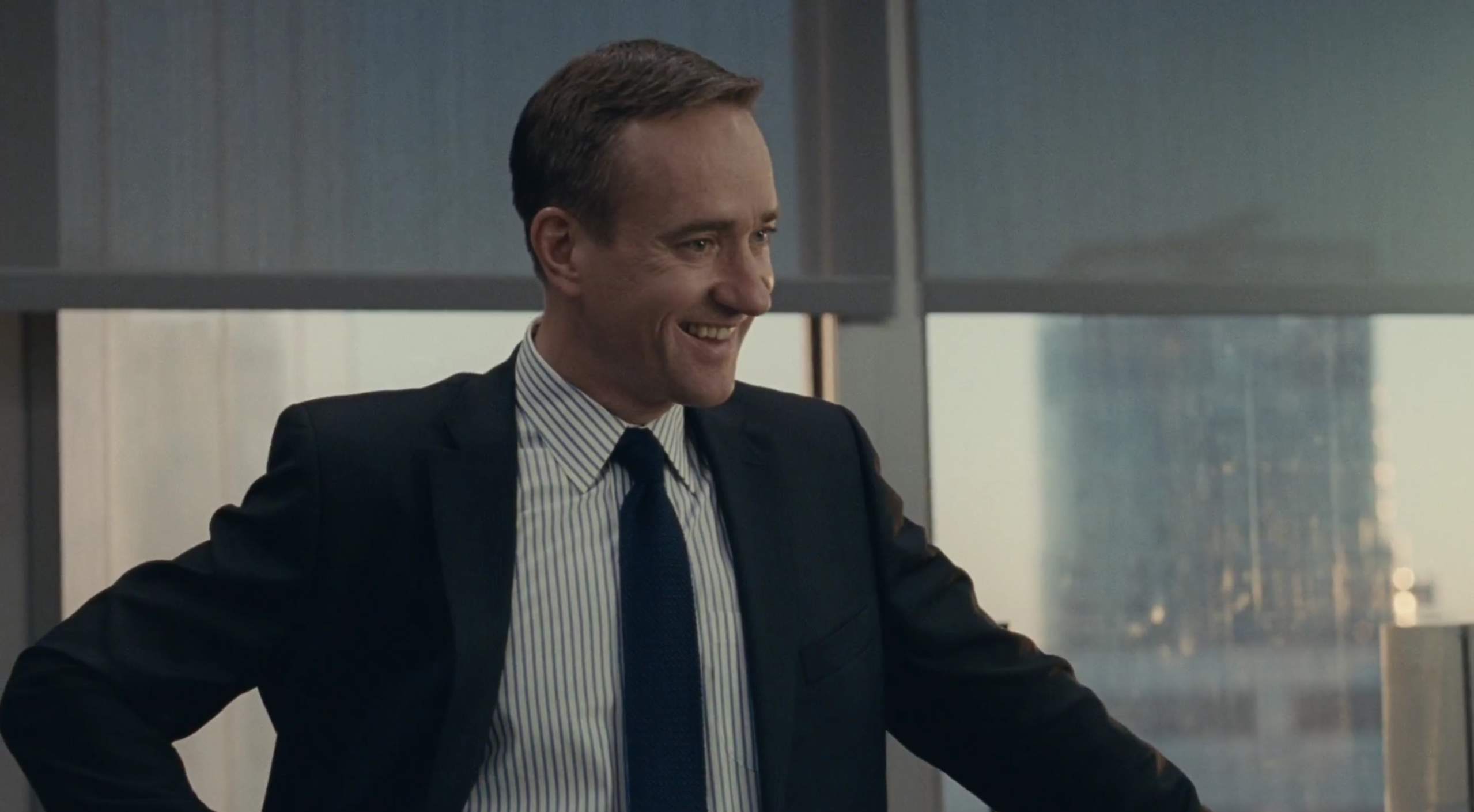 It’s gratifying that the closest we’ve come to a water cooler chat, conversation-driving show in the post-Game of Thrones era is one where menswear matters at all. Succession isn’t set in a feudalistic knightscape like Thrones, or an uncanny superhero present, like Watchmen. It’s set in corporate offices in New York (one of the last places you might actually need to wear a tie), on company hunting retreats in Europe, on a yacht. Is the wardrobe inspirational, aspirational, exactly? The way the tailoring in Kingsman might be? No.

But the wardrobe in Succession is character-driven, and analyzing what they wear and how they react to each other’s clothing is a study of the characters themselves. It was pretty clear in season one, even as early as Logan’s birthday party, that the styling choices were intentional, and even meta. What are the writers and wardrobe designers trying to tell us through these suits, sweaters, and overcoats? What do the writers/directors/designers think these men, with their names like J. Crew pants models, are trying to say through their clothing choices, and are we supposed to think the characters are succeeding, or failing? 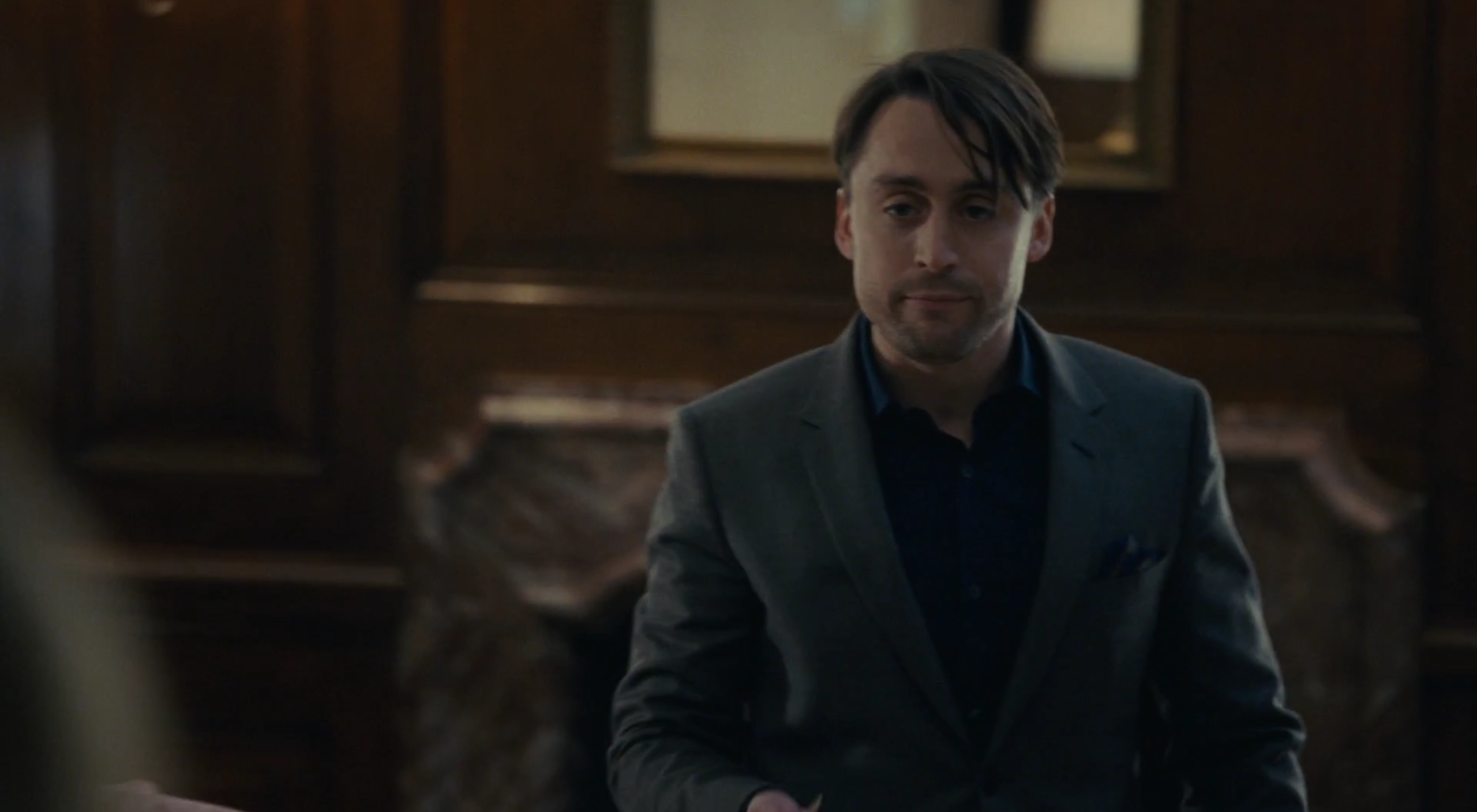 A dark dress shirt is a choice.

Tailoring is a key expression for some of the men on the show. Kendall (Jeremy Strong) wears narrow, dark suits with shirts with small-ish point collars. He wears an open collar a lot (a look I generally endorse although this character has put me off it). He sometimes wears a bigger tie knot than is advisable. His suits look expensive and modern, neither designer edgy nor luxurious — he’s a corporate raider but without the egotistical 80s excess of bold pinstripes or high-contrast ties. He’s not Patrick Bateman or Gordon Gekko, but he still seems to care. 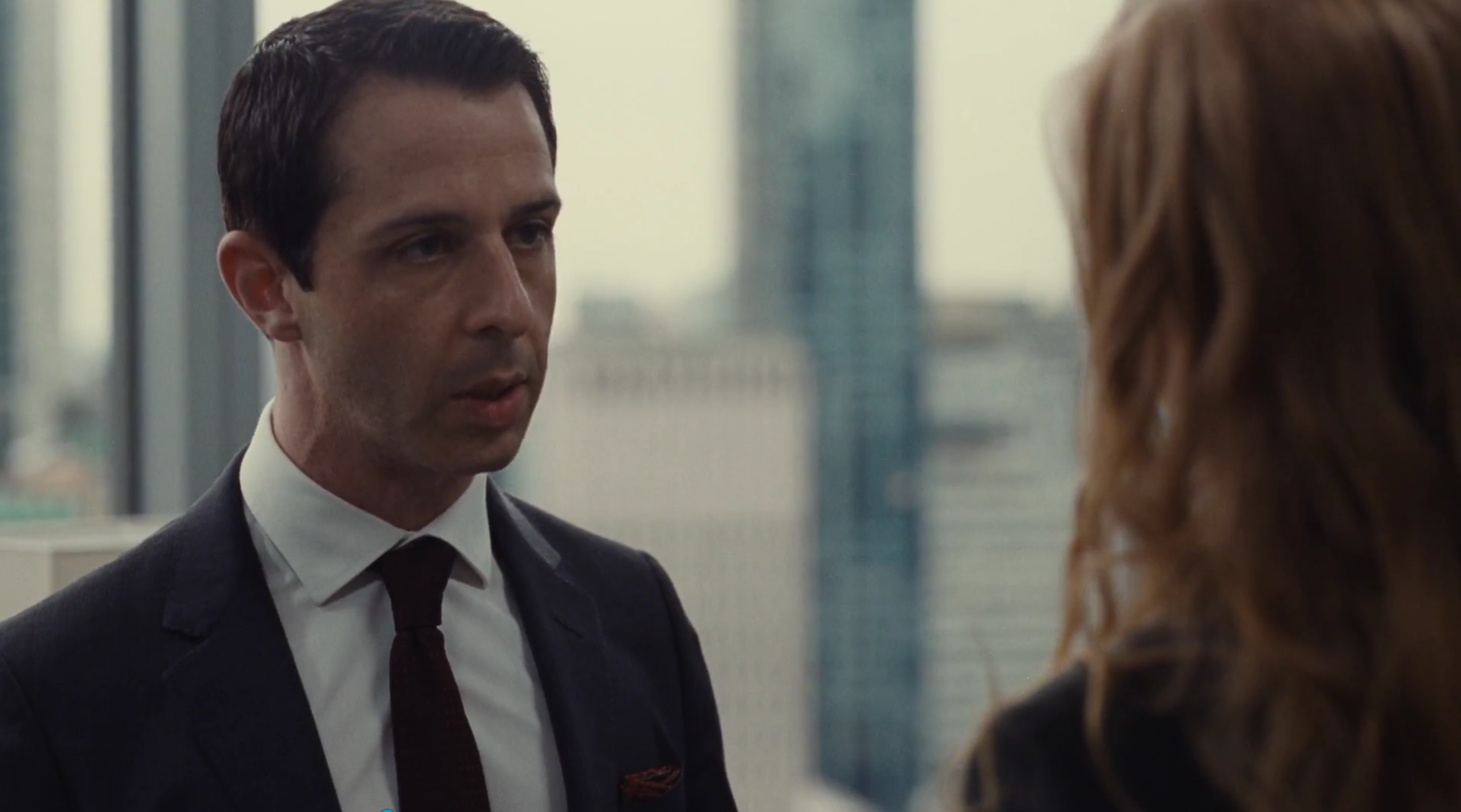 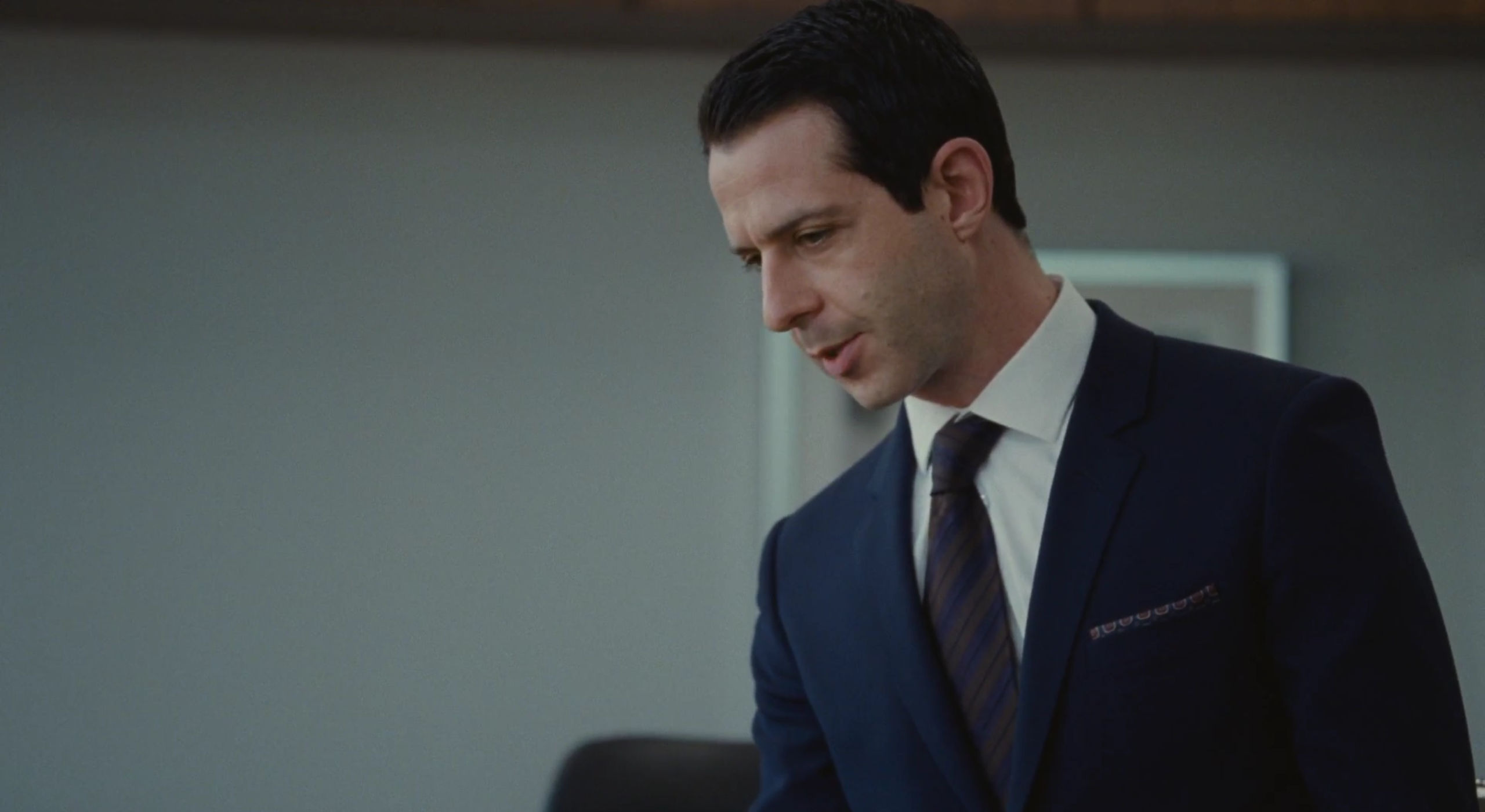 Roman wears lighter suits and darker dress shirts, which, while great in the right context, since at least the 1980s has signaled sleazeball in film/TV. On at least one occasion he wears beltless trousers (possibly side tabs — signaling, maybe, custom?). That would also support him poking fun at Tom for his, I assume, off the rack suits — Shiv’s last jab in the dinner scene is cut off but starts by saying they had tried to take some of Tom’s suits to the tailor Logan uses, presumably without success. But Roman is also always fiddling with his clothes — pulling pants up, re-tucking shirts — he’s always felt like the black sheep, and he never really looks comfortable. 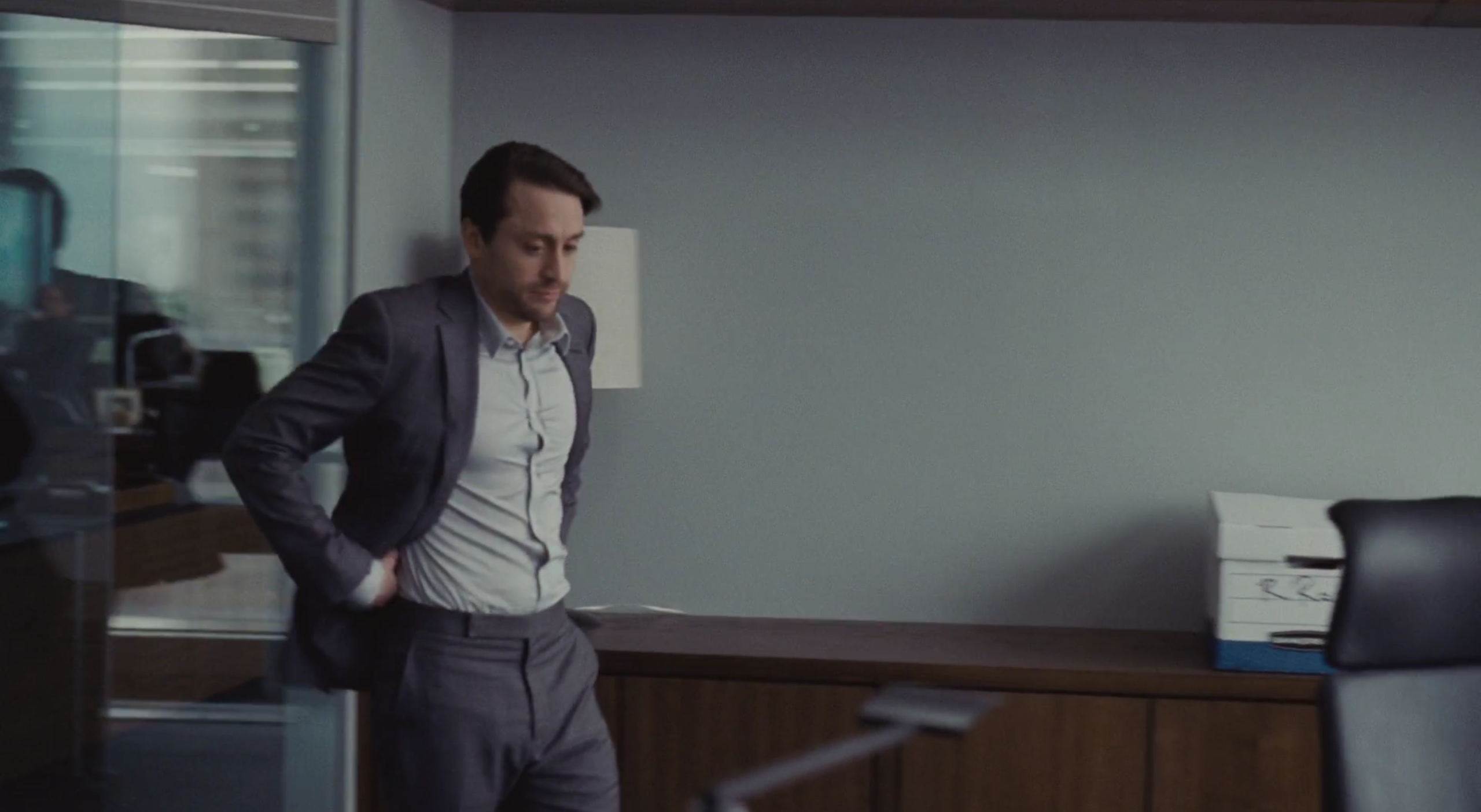 Logan’s tailoring is harder to get a good read on. As an older man with a belly, Logan (played by Brian Cox) is not as easy a suit fit as the younger, more columnar-shaped guys. Although his suits don’t look worn out, it’s possible they’re supposed to be older — their broad shoulders intended for a younger, more upright Logan. At times his jacket collars gap; some of the sleeves are long enough that I have to guess they were not tailored. Whether this is intentional — signaling Logan values playing the game vs dressing the part — I’m not sure. 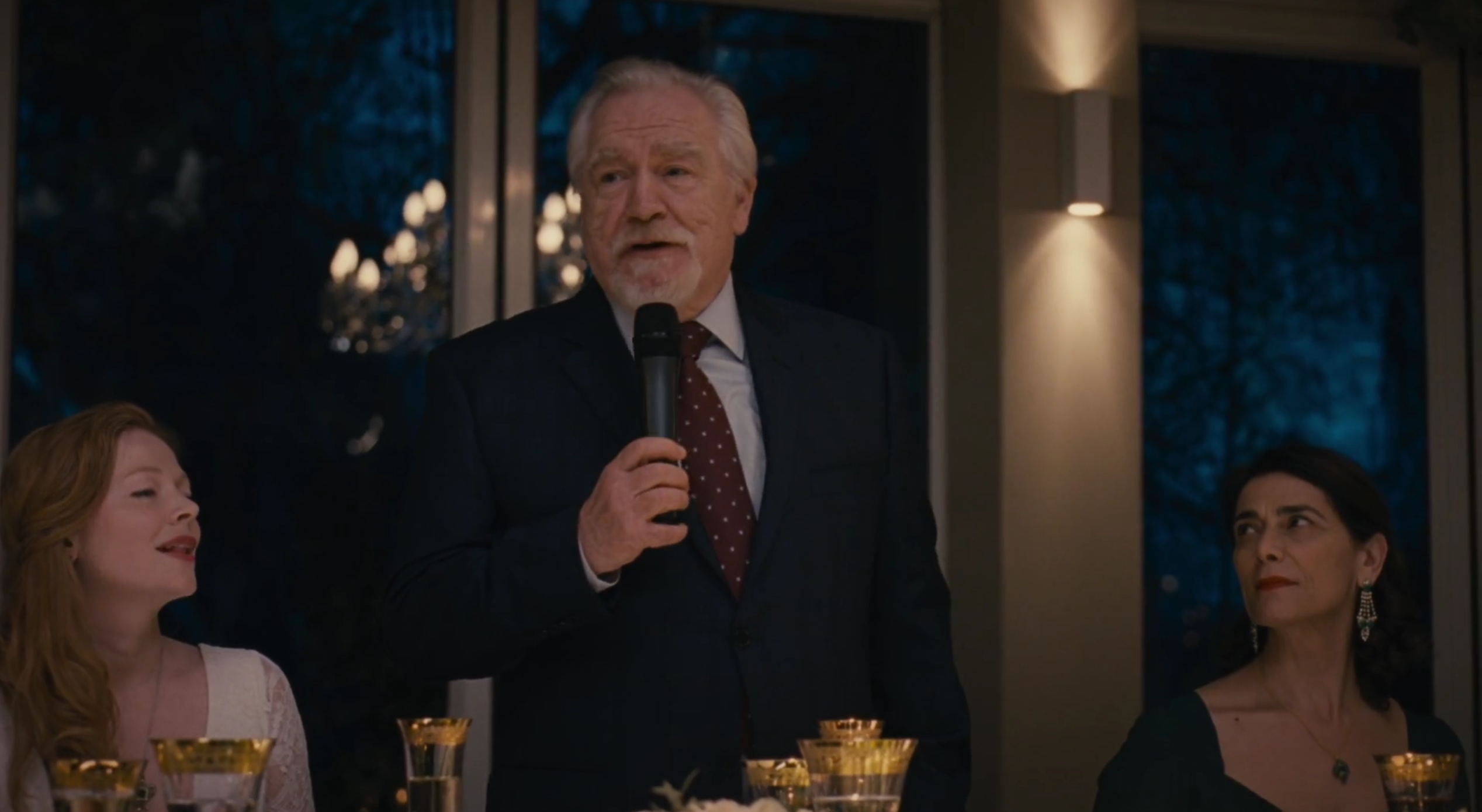 Brian Cox’s Logan Roy at Shiv’s wedding: not perfect but not bad. 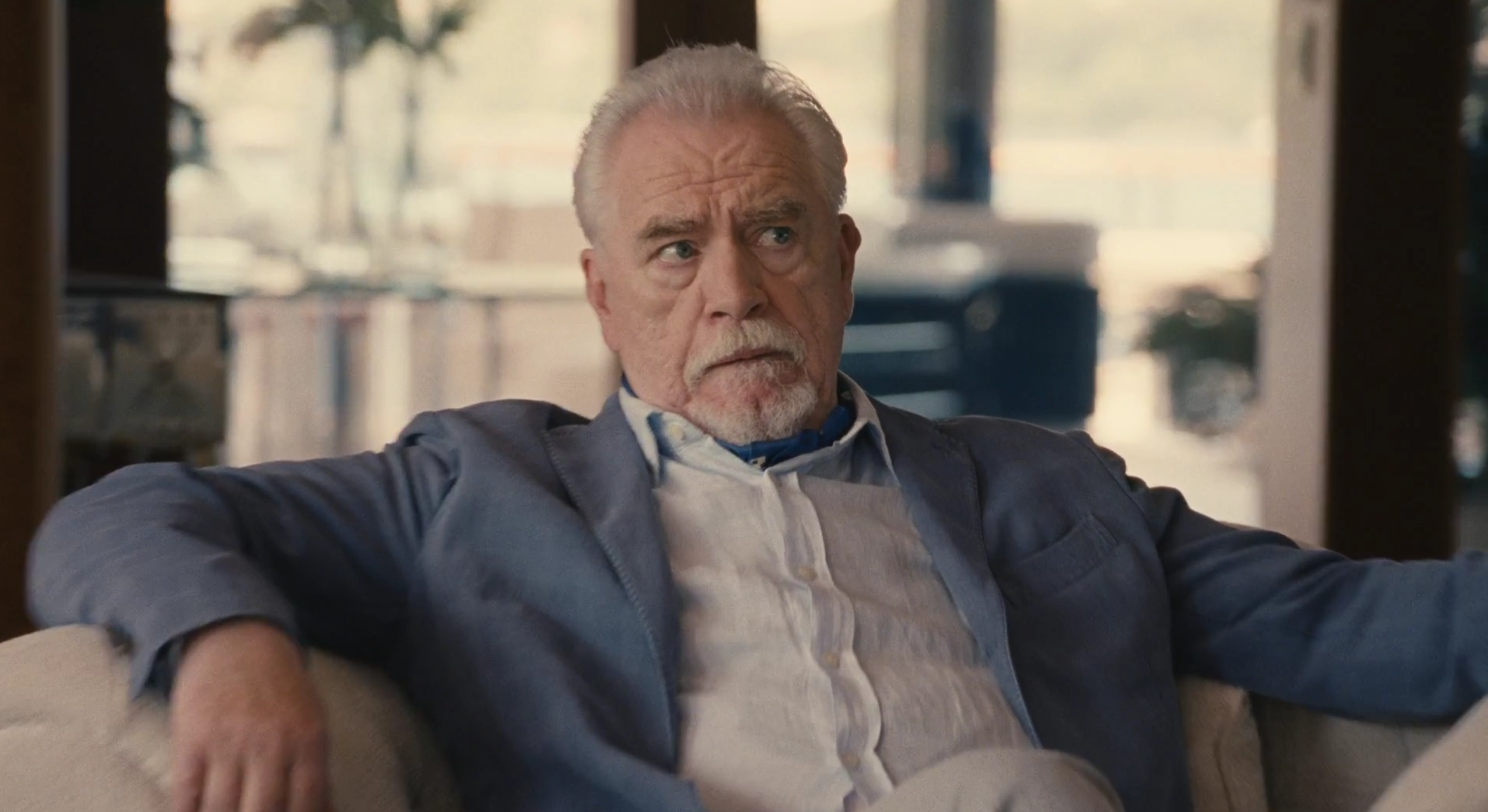 Connor prefers softer garments that comport with his do-nothing lifestyle, his only motivation to cling to third base, where he was born. He wears a tux well (pique shirt, self-tied bow?), but his jackets and shirts seem a little loose. Between his desert casual, city vest suit thing, and yacht linens, he’s a good example of someone we’re probably all afraid we might be, sometimes: arguably in the right clothes but never looking quite right.

Cousin Greg sees the most evolution over the course of the show. He shows up in New York in what’s likely his only navy blazer and a mud-colored nylon jacket; midway through season 2, he’s in better fitting suits and French cuff shirts, having gone through a thrift store suit phase in between when he has to dress for office work in a hurry. 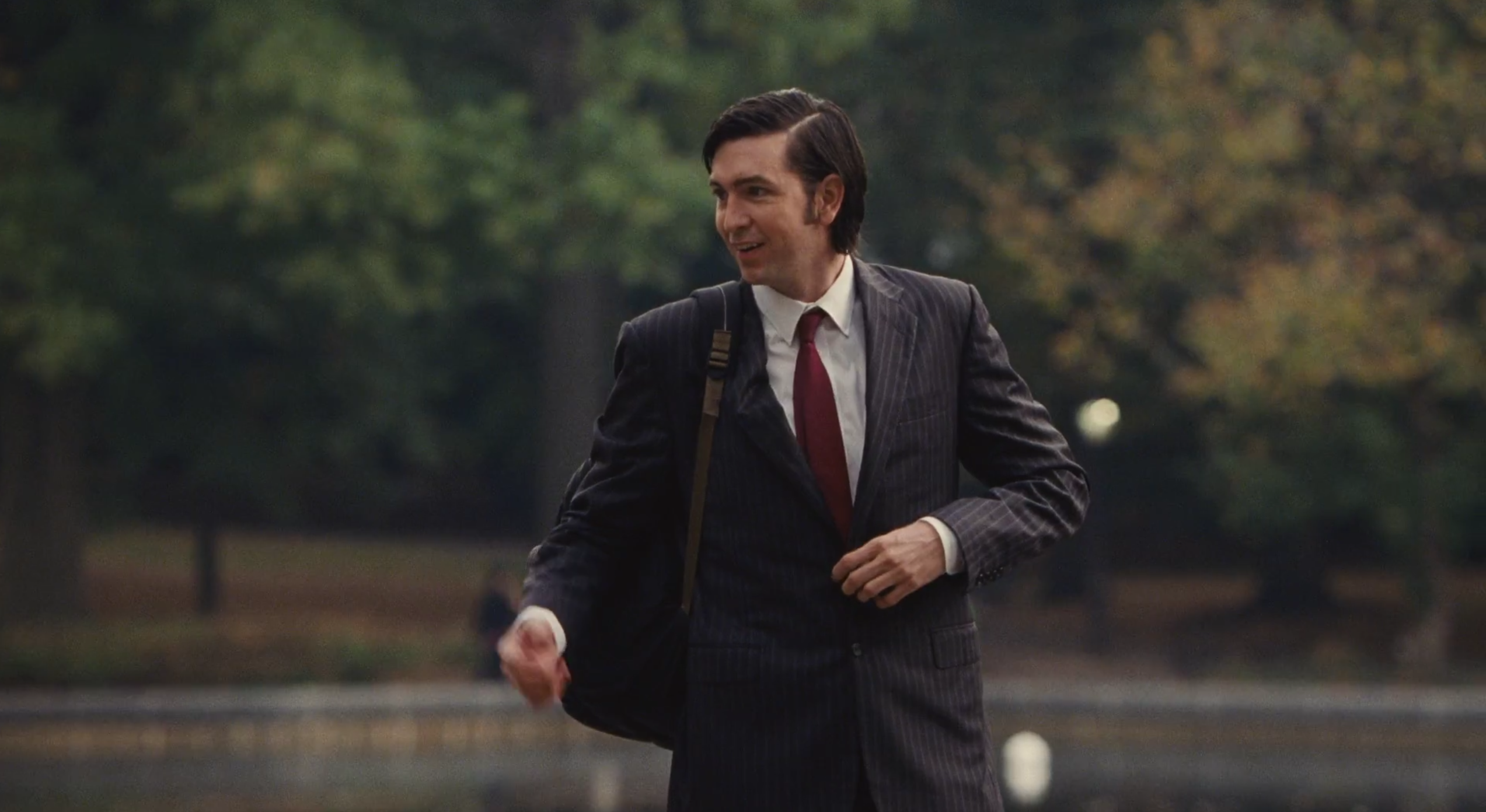 His shirt collars remain, in my opinion, bad. I don’t know what the shirts are in this show, but none of them look great. Tom is the only character whose collars seem to fit right. I don’t like the anemic collars most of the characters wear — they’re stiff and don’t sit great when worn open; I’d prefer they were more spread or at least longer when worn with a tie. They make the most sense on Roman, whose navy dress shirts sometimes have a Jil Sander minimal feel that fits with what his character: thinks he’s edgy and cool; a little smarmy. The fact that the characters mostly wear stiff collared, tastefully patterned business shirts even in casual situations, with bulky sweaters, also seems to say something about them — a business shirt is their default; why would they switch to a softer oxford?

Overall, though — it’s Wamsgams. Tom’s my Succession icon of mild style. He may look like a walking Brooks Brothers mannequin, and maybe he’s just trying to fit in where he never will, but the suits fit, the shirt patterns are tasteful, and the knit ties are one step toward casual from a straight-out-of-the-box Business Ken doll. Tom is a schmuck, but the suits. are. fine. 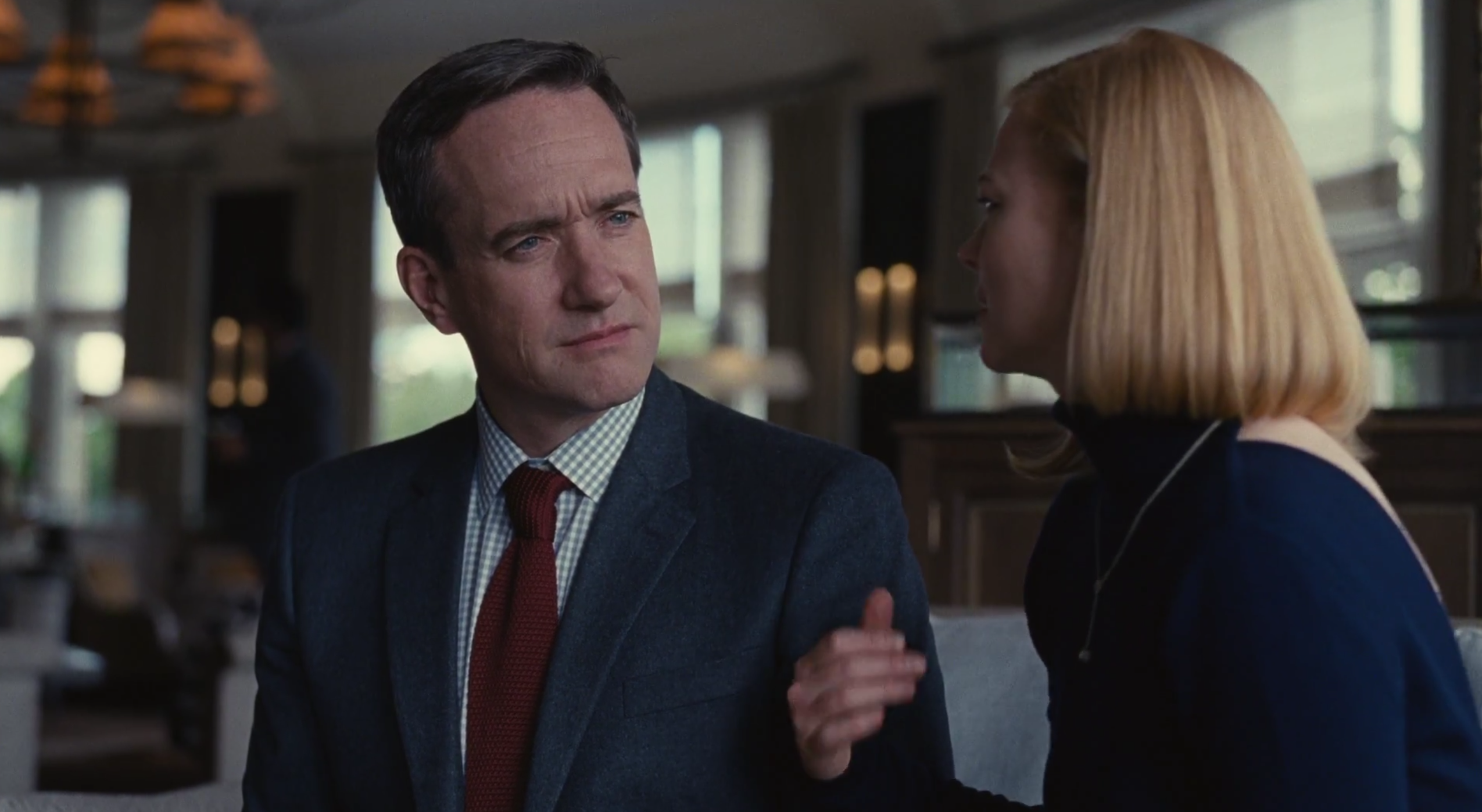 A haircut straight out of a Ben Silver catalog. 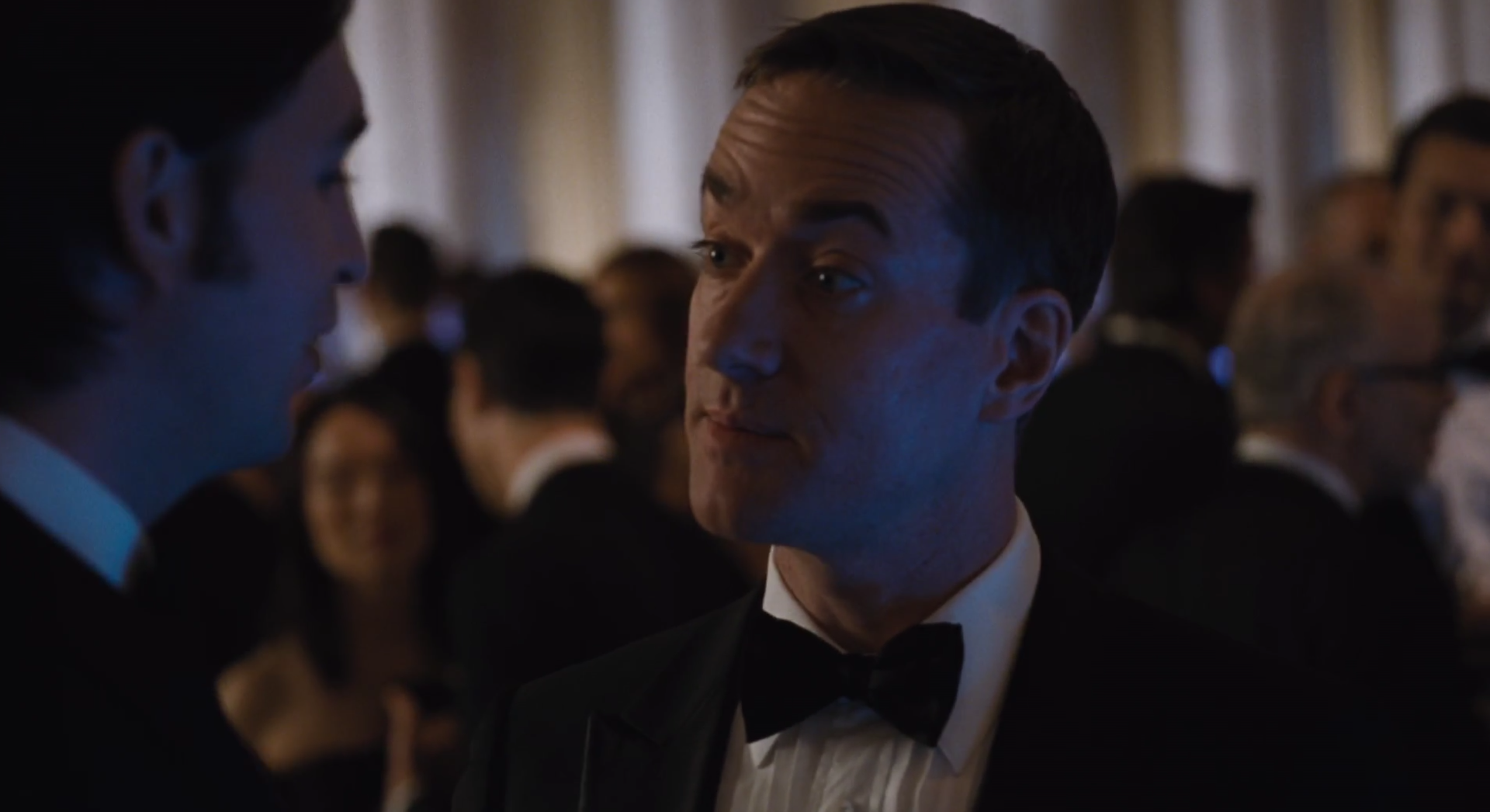 Peak lapels and a real bow tie–I’ll take it.

The casual wear is also tremendous and sometimes telling. First off, they get a whole episode each for  Orvis-chic huntwear and Mediterranean yacht gear. In initial episodes, Tom’s in a slightly too small Barbour Bedale — a basic bro mistake. There’s also Logan’s nondescript rich guy outerwear (is it from Syms, or Loro Piana?); so many textured knits. Connor’s terrible vest. (There’s a lot of vests, his is just the worst.) 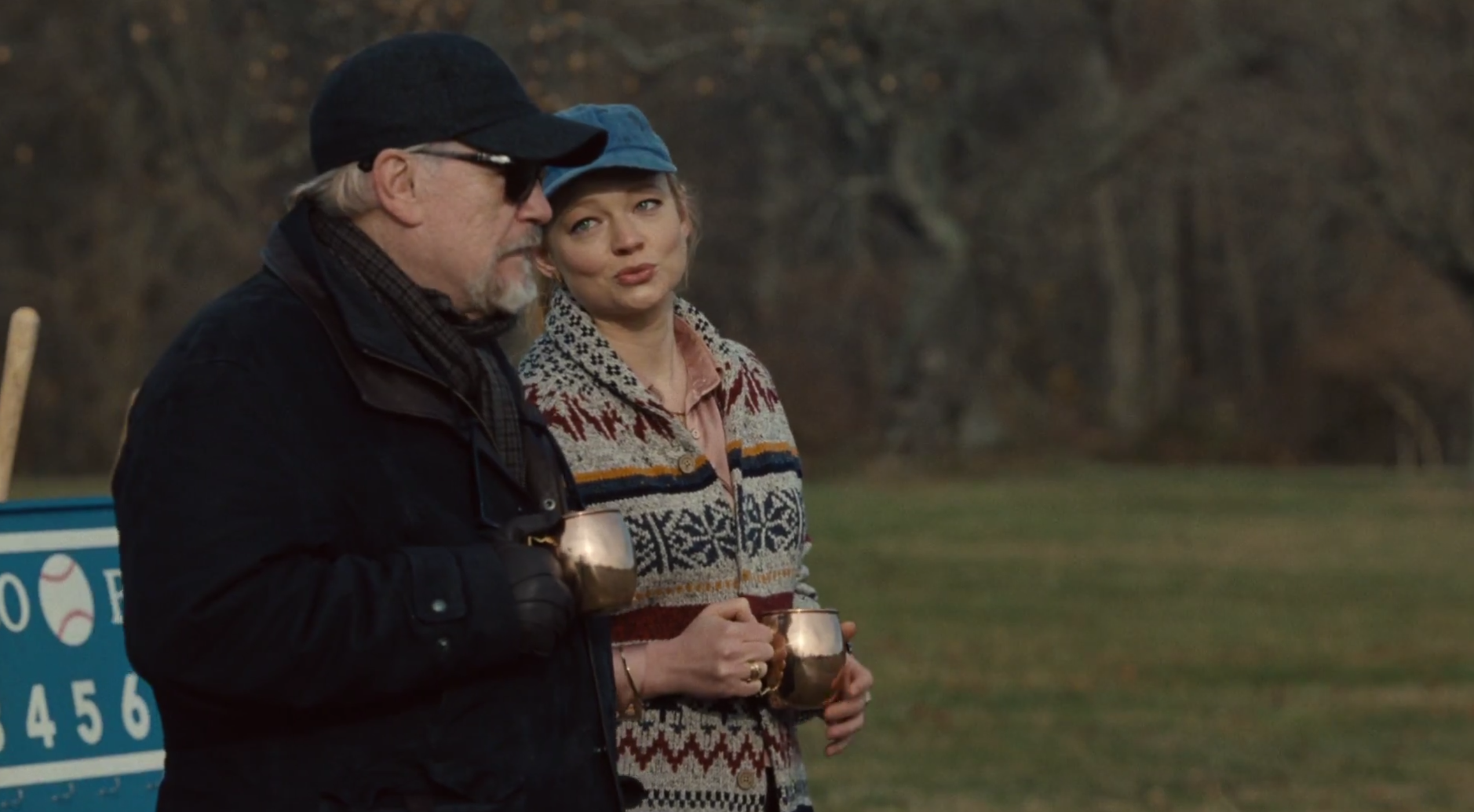 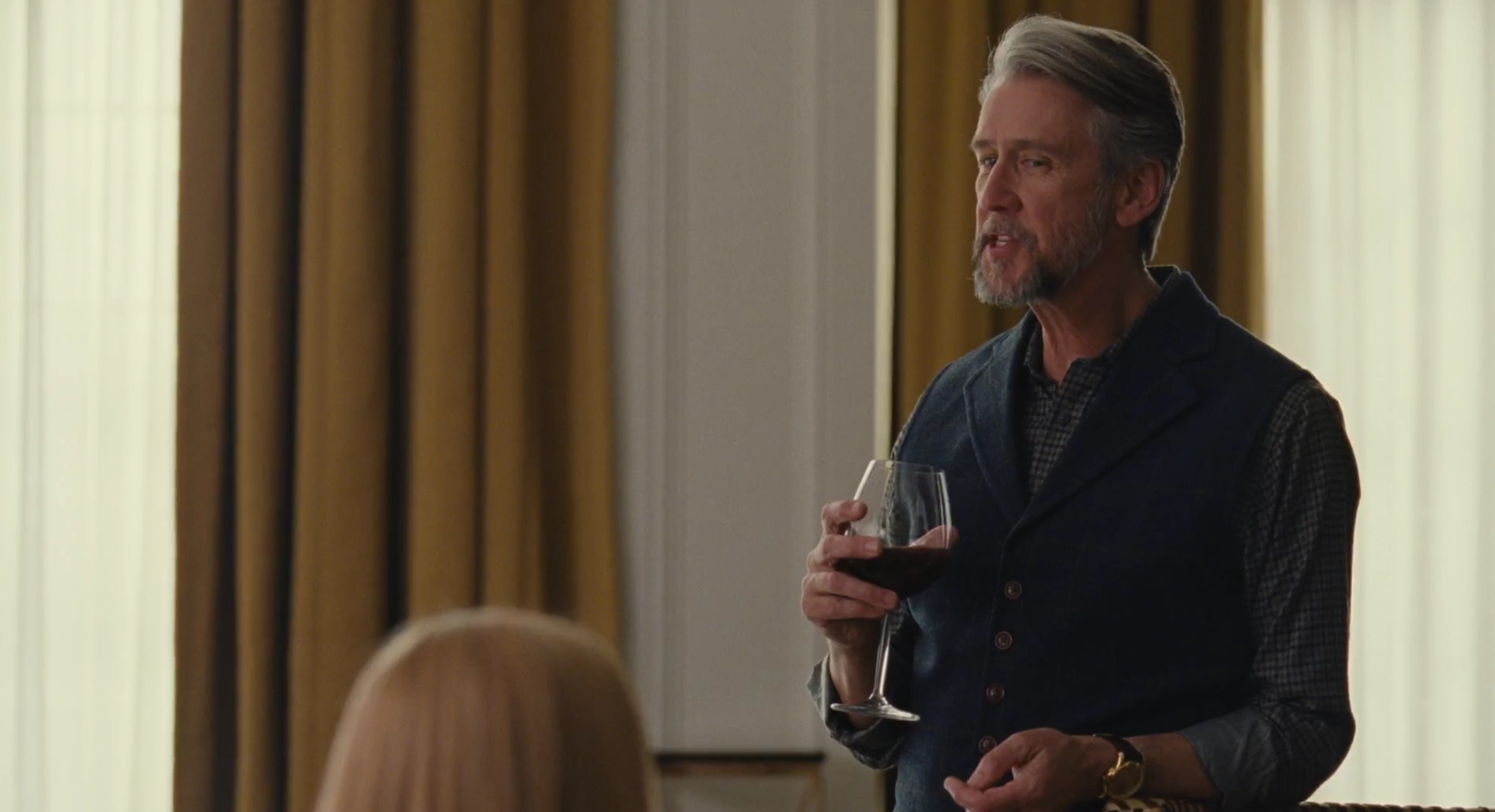 The same kind of lifetime wealth and delusion that lead to vanity presidential runs also lead to vests like this. Oh, you don’t hyper-decant? 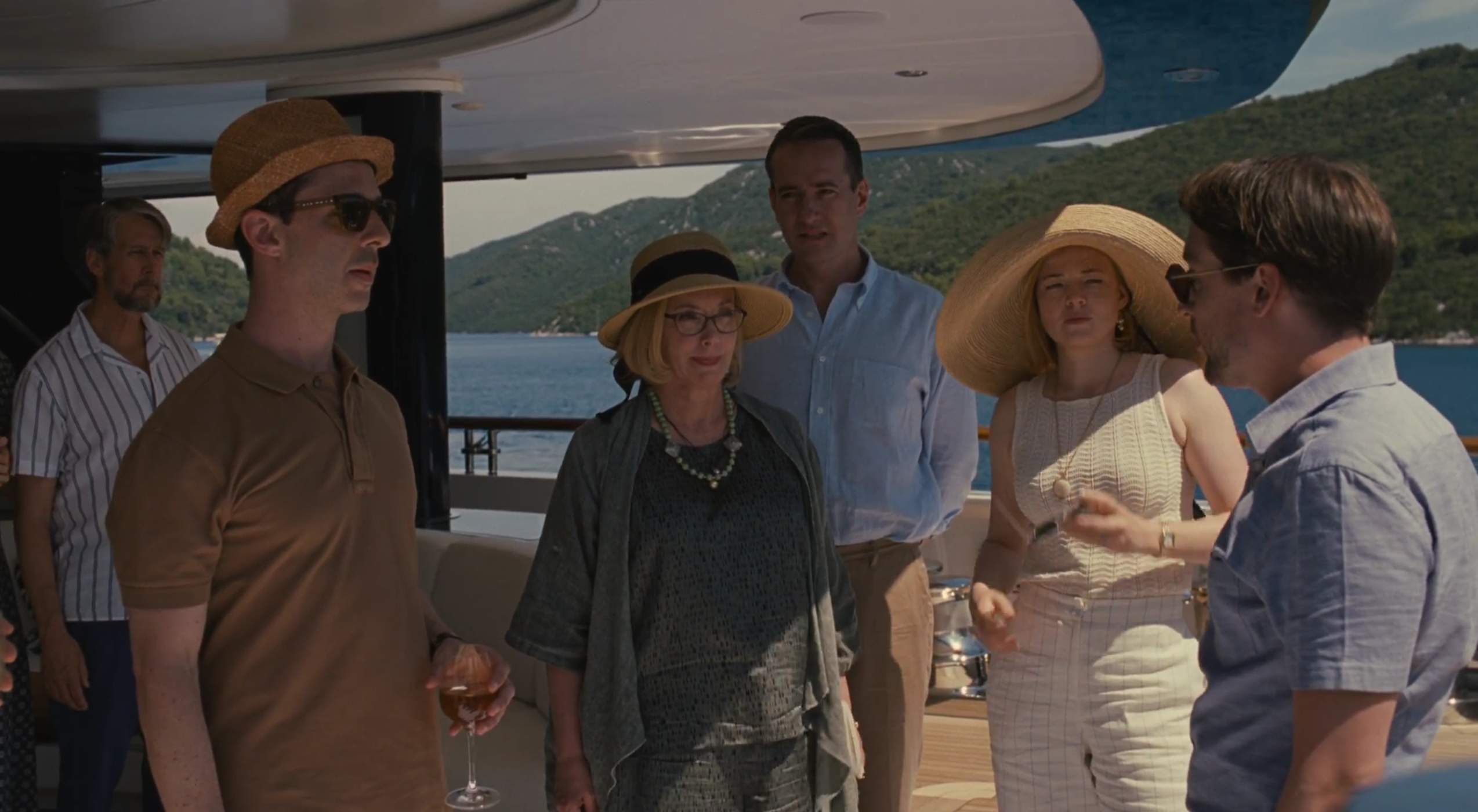 Worse Kendall idea: driving drunk through the damp British night to find coke, or this hat?