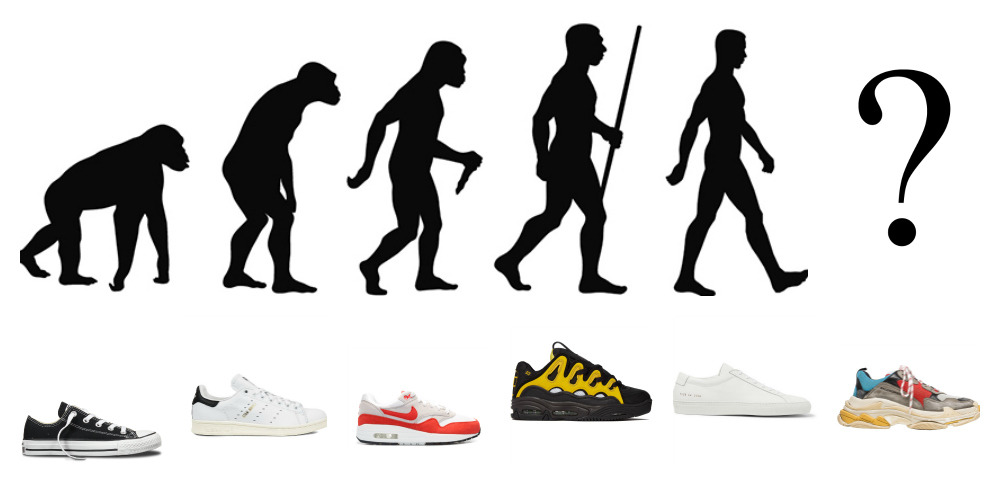 If your tastes steer toward the classics, it’s a been a great decade or more for sneakers. Nike’s constant churn of retros from every era, the renewed popularity of Stan Smiths, Converse’s 70s chucks, and so on. No longer must you pine for a pair of Adidas you once saw in a photo of the Beastie Boys in Washington Square. You can just buy them–or the modern approximation of them.

In the last couple of years, though, the sneaker weather seems to have shifted. One of the biggest success stories of the last decade was Common Projects, which essentially took classic sneaker styles and pared them down, rendered them in monochrome, and marketed them as luxury items. But there’s a new, weird wind. In the last year, shoes like the hulking Balenciaga “triple S,” Adidas’s Yeezy models, and Virgil Abloh’s meta take on Nikes dominated a lot of the conversation around sneakers. The trend isn’t isolated to sneakers–in both men’s and women’s fashion, intentionally ugly, often gaudy design has taken over and tasteful restraint is largely out. 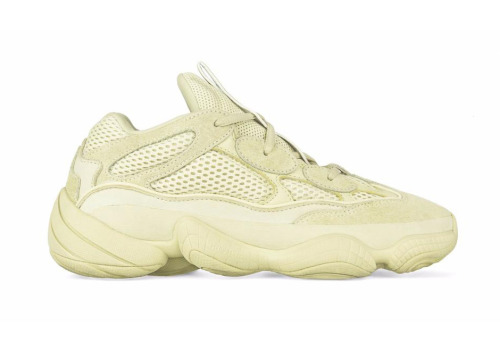 So to what degree does this mean changes for the average dude, who’s been wearing Vans or Nike classics for 10 years? I talked with a few guys who know what’s up with fashion and sneakers–Jian Deleon, Editor at High Snobiety and host of Fit Battle, Brian Trunzo, Senior Trend Forecaster at WGSN, and Skylar Bergl, freelance writer and former editor at Four Pins and Complex. We talked about trends, what it all means, and what they’re wearing right now.

Wilder Designs Get the Attention, but the Classics Still Get the Wear

“I do think we’re reached this awkward postmodern phase,” said Trunzo, “where as long as something has the right context it can be cool or covetable.” He traced the broader trend of ugly sneakers to a specific moment: “Speaking microhistorically of ironic footwear,  when Ian Connor [in 2015, when the stylist was working with Kanye West, A$AP Rocky, etc.] wore Skechers, that was the moment it all went to shit.” That ugly, uncool footwear, worn by a cool kid, “bleeds forward with Birks, Crocs.” 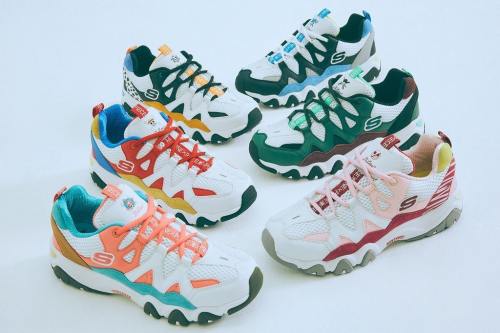 “Even though I would never wear them, I welcome some of these outlandish, at times garish new sneakers we’re seeing,” Bergl told me. “I think one aspect that contributed to their rise was the prevalence and obsession with “minimal” sneakers we saw pop up between 2011 and, say, 2016. We seem to have rebounded past the middle and all the way to the other end of the spectrum.”

Deleon sees it as part of a broader shift in style. “It’s no longer about a singularly defining aesthetic, but singularly recognizable pieces. A pair of Off White Nikes or Yeezys is an instant signifier of taste level. It’s shorthand for someone who sees themselves as being cultured, a wearable ticket for saying ‘I want in.’

“Whether they ARE in is a different conversation. It’s like wearing the Met museum pin out after seeing a fashion exhibit,” to signal to everyone you knew about and saw the exhibit. Still, some of the crazier designs may be less about buying and wearing, then just knowing the reference. “People enjoy them vicariously, more than in real life. Being aware of and not wearing them is almost as cool as being aware and wearing them. Rich people with a lot of disposable income pay money to feel cool.”

The rise of meme culture and the meme-ification of fashion was a common theme in my conversations. As Balenciaga’s Demna Gvasalia recently stated, “The emphasis has gone from quality and craftsmanship into the uniqueness of the product. The younger generation are looking for something that stands out and makes them special rather than necessarily an amazing finish that you would find with some traditional brands.” (h/t Marc Bain)

Said Bergl, “These over-the-top, insanely chunky sneakers do feel like one big joke that I’ve been left out of, but if people are buying them, there are obviously people who want to be in on it.” Trunzo, though, said most guys probably stay the course with classics, even though that may not mean the same few pairs of ubiquitous, basic sneakers. “At the end of the day, if a guy has somewhere to go and people to impress, an important function, he’ll go back to tried and trues.”

To an extent, comparing these new designer sneakers with the pairs you’ll find at your local Foot Locker isn’t an apples-to-apples comparison. For decades, as sneakers evolved, supposedly, to meet the changing needs of modern athletes with technology developed to make us run faster, jump higher, etc., we repurposed discarded designs as everyday footwear. It was arguably Gucci (one of the brands reaping the benefits of the current baroque fashion moment) that first capitalized on designer sneaker potential by putting its red and green stripes on a basic shoe in the early 1980s. Since then, designers (that is, fashion lines rather than mass-market brands line Nike or Adidas) have always had one foot in sneaker culture, from 1990s Prada to Maison Martin Margiela’s reproductions of sneakers made for the German Army.

But the line between designer sneaker and mass market sneaker has been blurring. Designers have long “collaborated” with mass market brands (like Mihara Yasuhiro or Alexander McQueen with Puma or Yohji Yamamoto with Adidas). Now as much as ever, especially in menswear, designers are celebrities, and celebrities have mountains of cultural capital. Kanye has sneakers with Adidas (some of which are basically Reeboks), Raf Simons likewise. The big shoe companies–Nike, Reebok, Adidas, etc. that for decades marketed themselves as chasing athletic performance now find themselves in an era when a huge part of their market consists of people who don’t even need to pretend their sneakers make them run faster. 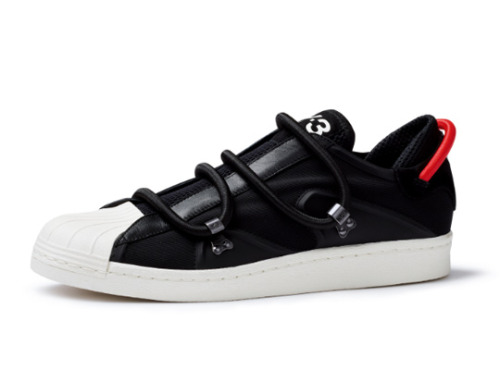 The other big differences today are visibility and accessibility–social media and e-commerce give you much broader access to see what people are wearing, sometimes with links to wear you can buy it. In the 1980s and 1990s, kids wanted Jordans above all, and that drove the evolution of retro sneaker culture. As Deleon put it, grown up “kids were buying things never got on Christmas morning.” Now, though, there’s an entire generation of kids who grew up on different cultural references–watching LeBron, listening to Rocky, and who may be less likely to save for a pair of LeBrons than something that got a different cultural cosign. And those endorsements spread hype instantly across the country (and world–check out Jon Caramanica’s Kanye-branded triple S knockoffs).

Said DeLeon, “If anything, [sneakers and fashion] are now choose your own adventure. Meaning is derived from context, people who don’t add any context will called out for being a billboard.”

Will the Elements of These Designs End Up on Your Feet?

A big question remains: will we see trickle down of the elements that connect a lot of the sneakers currently in vogue? More color, thicker soles, curved lines, more layers, more everything?

“In the extreme cases we’re seeing now on the runway? Definitely not. But I think the concepts that comprise these styles will—panels, overlays, more colors and different materials on one shoe,” said Bergl. Trunzo echoed, “Yes, I do believe we’ll see trickle down from intentionally ugly silhouettes–a lot of irony.”

So What to Wear Right Now?

Right now, DeLeon said he’s been wearing a pair of Converse designed by J.W. Anderson.  As for a pair he always goes back to, it’s Jordan Is in black/royal.

Trunzo has been wearing a pair of Raf Simons designed Adidas Ozweegos, which he describes as “quite geriatric.” 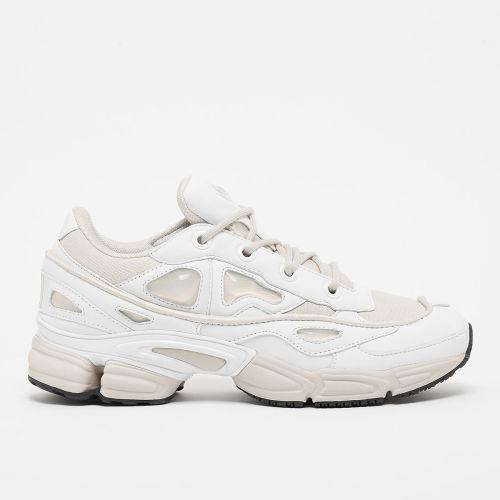 As for Bergl, “My sneaker lineup of late has been extremely simple. Nothing too techy and almost always in white. Vans Slip-ons and Authentics, Converse Chuck Taylor ’70s All Stars, Adidas Matchcourts and then boots.”

The sneakers I’ve been wearing the most recently? A pair I didn’t get for Christmas: neon Air Max 95s. Arguably quite ugly.