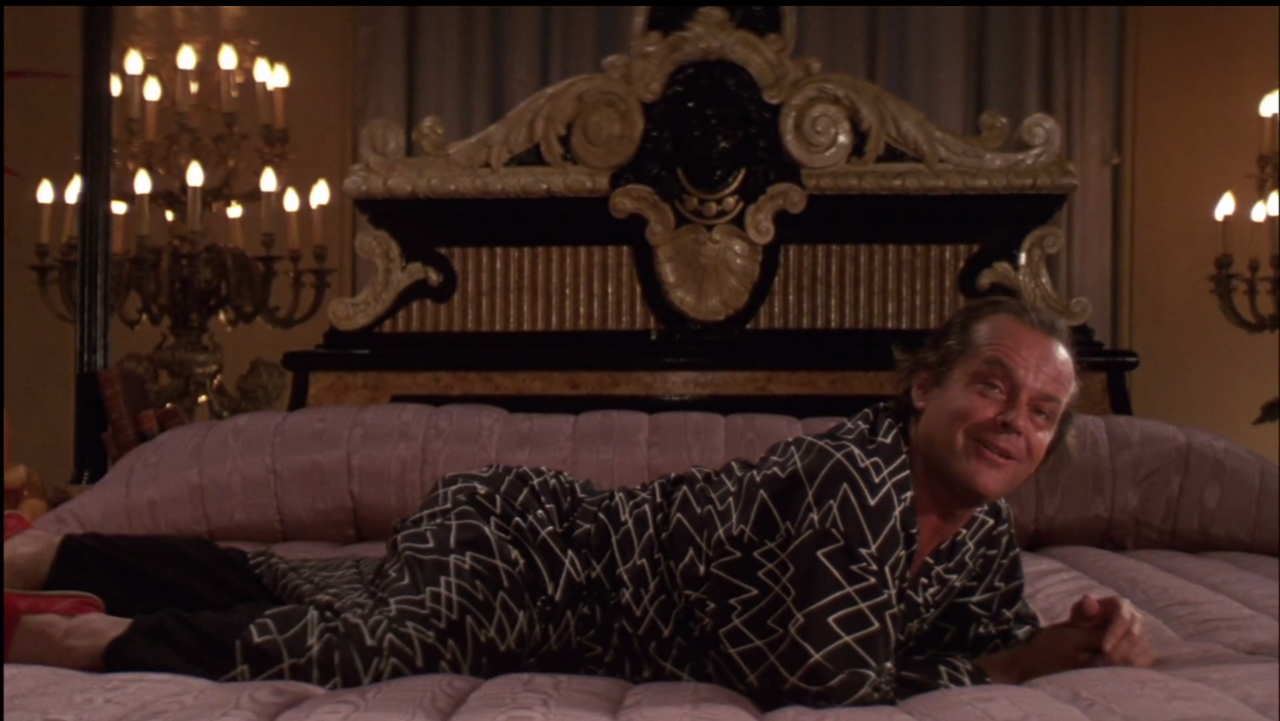 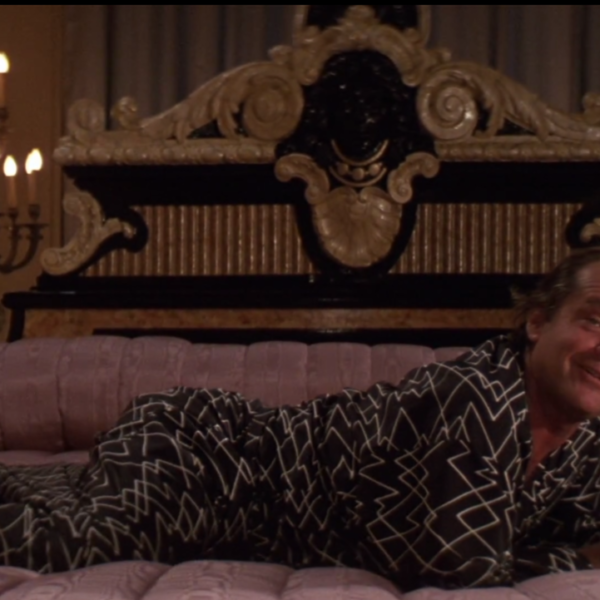 Wardrobe Department is a column where we look at a film or TV show and go into how clothes make the character. This isn’t a roundup of style icons, but rather how clothing can tell a story and inform the narrative. In this one we look into the 1987 comedy The Witches of Eastwick.

The 1980s was a great time for a certain kind of nouveau riche lifestyle, as well as its accompanying look, which mixed elements of luxury with questionable taste. The decade’s style was a bit gauche, but that was kind of the point. The key was to look rich and important, and that meant lots of gold, wild prints, and so, so, so much silk.

Based on a John Updike novel from a few years earlier, the supernatural sex comedy The Witches of Eastwick came out towards the end of the decade. Louche Italian suits and stock broker style were well into the mainstream at this point. It didn’t take much for the careful cultural observer to see the ridiculousness of it all, and director George Miller – a guy who cares about film style considering he created the image of the leather-clad dystopia in Mad Max – really leaned into the arch contrasts between the film’s traditional, preppy New England setting with the liberation of the devilish new guy in town, Daryl Van Horne (as played by Jack Nicholson).

Nicholson plays a character fully, wholly, and almost disgustingly liberated with sincere satire and satirical sincerity. His speeches are grandiose, mischievous, and often pretty gross. The film’s introduction to the town puts everyone in pastels, but in Nicholson’s first big scene he’s wearing a sloppily tied red bow tie and what looks like an elephant-skin print overcoat. His hair is sloppily put up in a pony nub, and he’s tended to by a manservant in a small tent of his own. The scene makes clear that the guy is rich and firmly tasteless.

Director George Miller is no stranger to wardrobe shorthand. While Nicholson’s outfits are amazing costuming, he’s never made to look “good” in any traditional sense. Considering the only patterned item shown in this film before this was a rep tie, just look at the contrast this robe makes. It’s as loud and as obnoxious as the character, informing who he is faster than any monologue ever could.

Further along in the film, Nicholson’s outfits become like a drag performance of wealth. He doesn’t care and he’s having a laugh at everything around him, especially earthly delights. [SPOILER: he’s the devil, so in a way he’s the oldest of old money. He doesn’t need to stick to the Weejun ways of this preppy town, and thrives off subversion and mischief]. Just look at how he plays tennis in the photo above. That’s a white blazer over a billowy shirt, tied at the waist, swim trunks, and yellow Nike Dunks. It’s Wimbledon style meets “fuck it” in a beautifully slapdash way.

Probably my favorite outfit is the last one of the film, where, as he goes off to town for breakfast, he wears a pink silk jacket over white linen trousers, topping it all off with what looks like some sort of matching pink duster.

These aren’t outfits that reflect the time by any means. The ‘80s was about boldness, but to go out of your way to make matching pink coats is a statement of ridiculousness and a look only Satan himself could get away with. It’s an amazing tribute to decade’s sense of style, while also finding liberation in it at the same time. Miller presents the town’s preps as clowns and fools, and although Nicholson himself is the ultimate cad, he is still the most alluring man in a town of chaste bow ties.

Wealth, carnality, silk jackets – all are skeevy, but alluring at the same time, like sin and desire. Miller paints Nicholson as a Reaganomic sex symbol, an incredibly moneyed sensualist who wants to devour everything he sees. Considering it’s Jack at his most scenery chewing, it’s hard to be immune to his charisma. That is, until our female protagonists realize a cad is a cad and reveal him as the gross monster he is. But in the meanwhile, we get a glimpse at what it would be like to be Jack, rich and tasteless. It looks pretty amazing.

Filed Under: Films, The Witches of Eastwick, Wardrobe Department