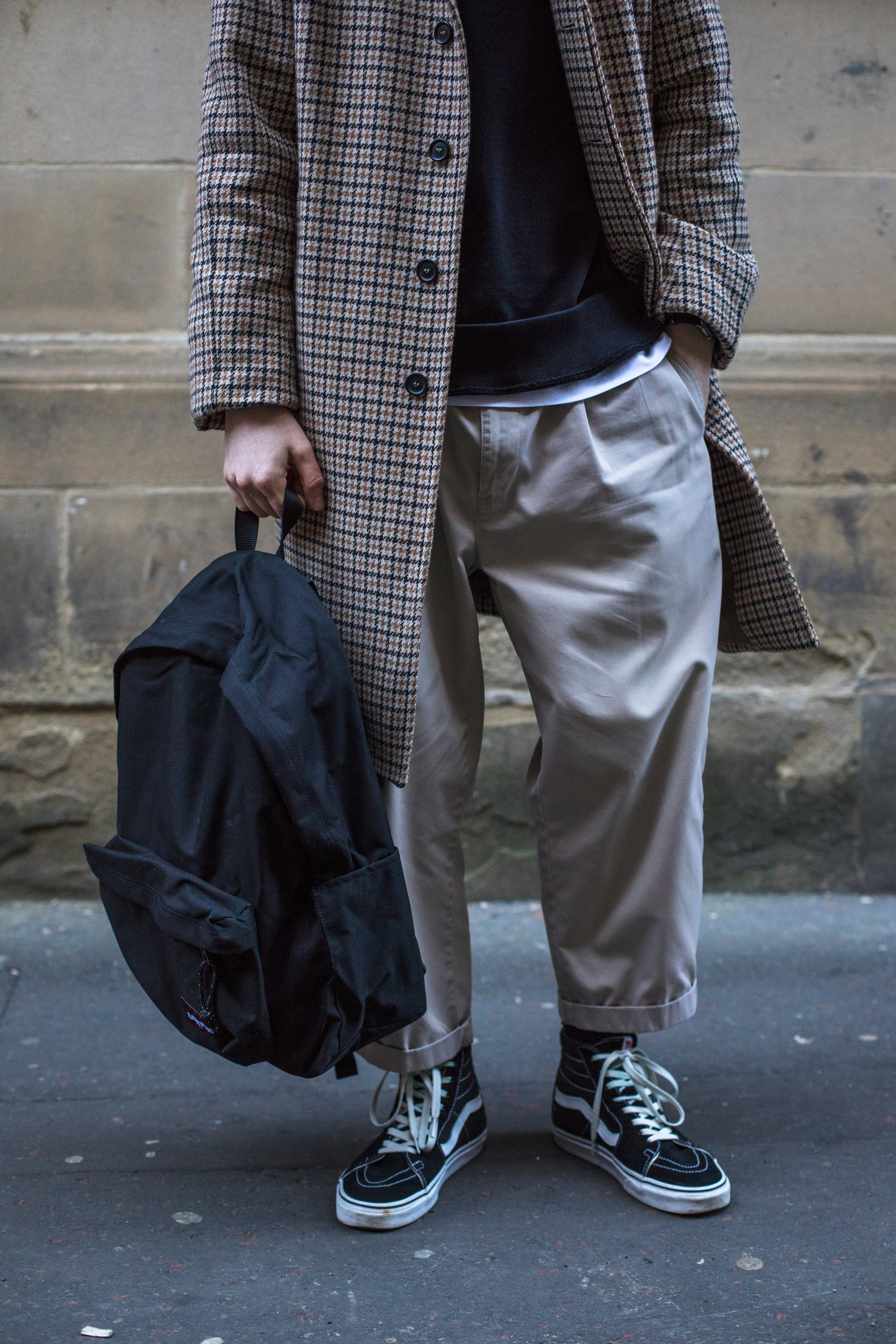 When I was putting together Monday’s post on overcoats/long coats worn casually, I planned to include a photo of Dan Watson, a graphic designer and blogger in London who I’ve followed for a long time on blogs/Instagram. Dan has always had good taste, i.e., taste that aligns with mine — a lot of work wear and vintage influence and modern “creative heritage” brands like Engineered Garments and Margaret Howell. (He currently works at Private White V.C., another line I like that draws a lot on traditional English sportswear.) 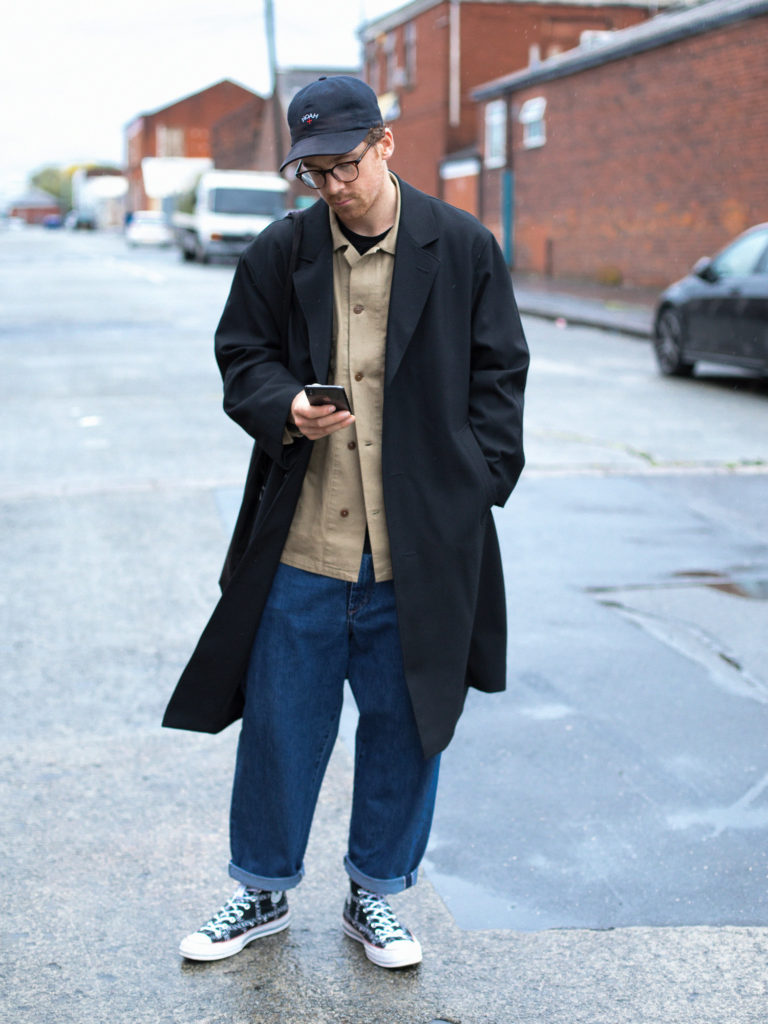 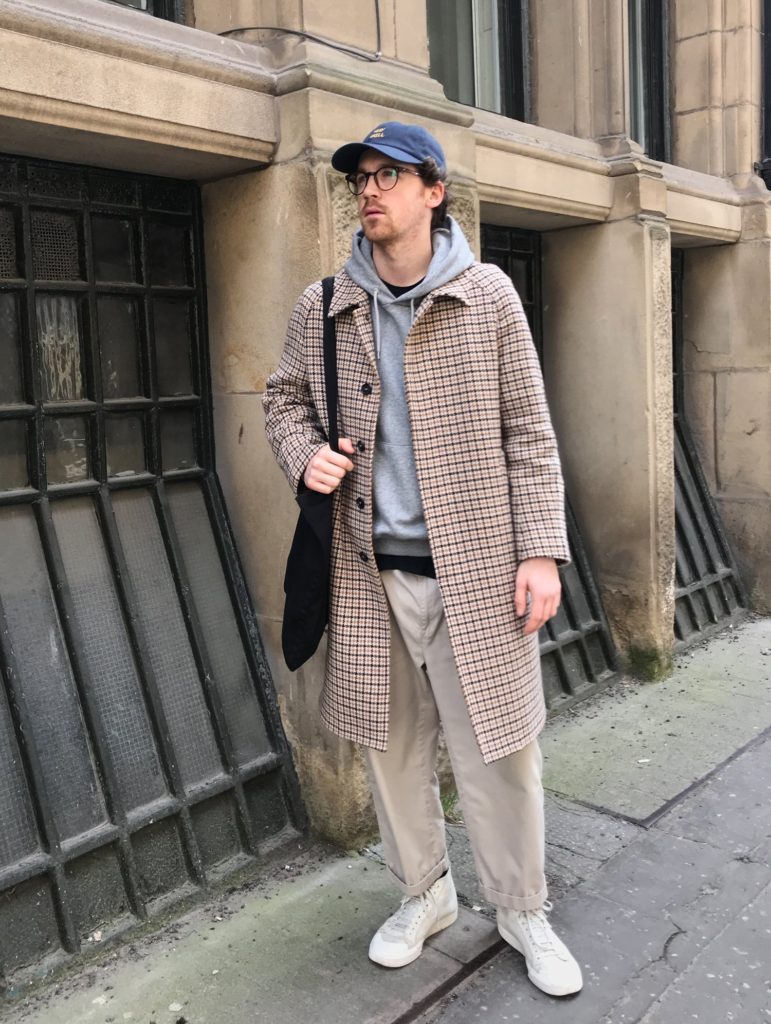 Over the last year or more he’s pretty consistently returned to a specific silhouette, which I think is current without being aggressively on-trend. He layers a long coat over shorter jackets or sweatshirts, with wide but significantly cropped and tapered pants, almost always with a soft baseball cap and sneakers. Fuller, cropped pants are really the key to making the ensembles distinctive. I know it’s no longer unusual to see well-dressed guys in fuller pants these days, but it’s still a significant departure from a decade of Italian/Ivy trim trousers. 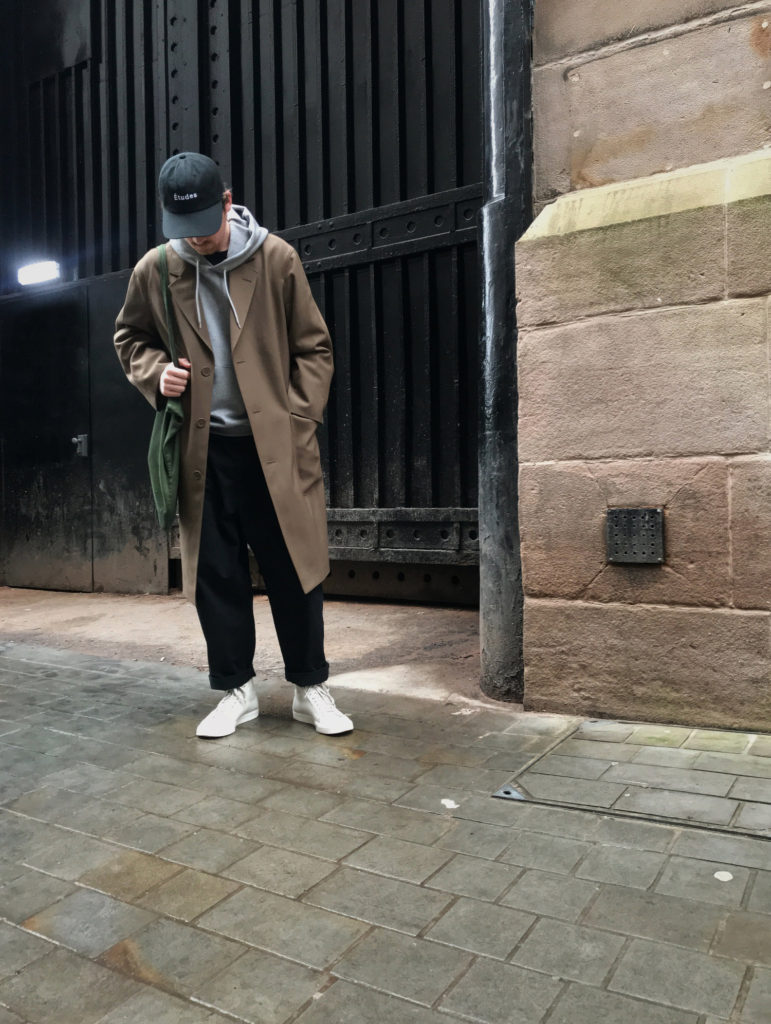 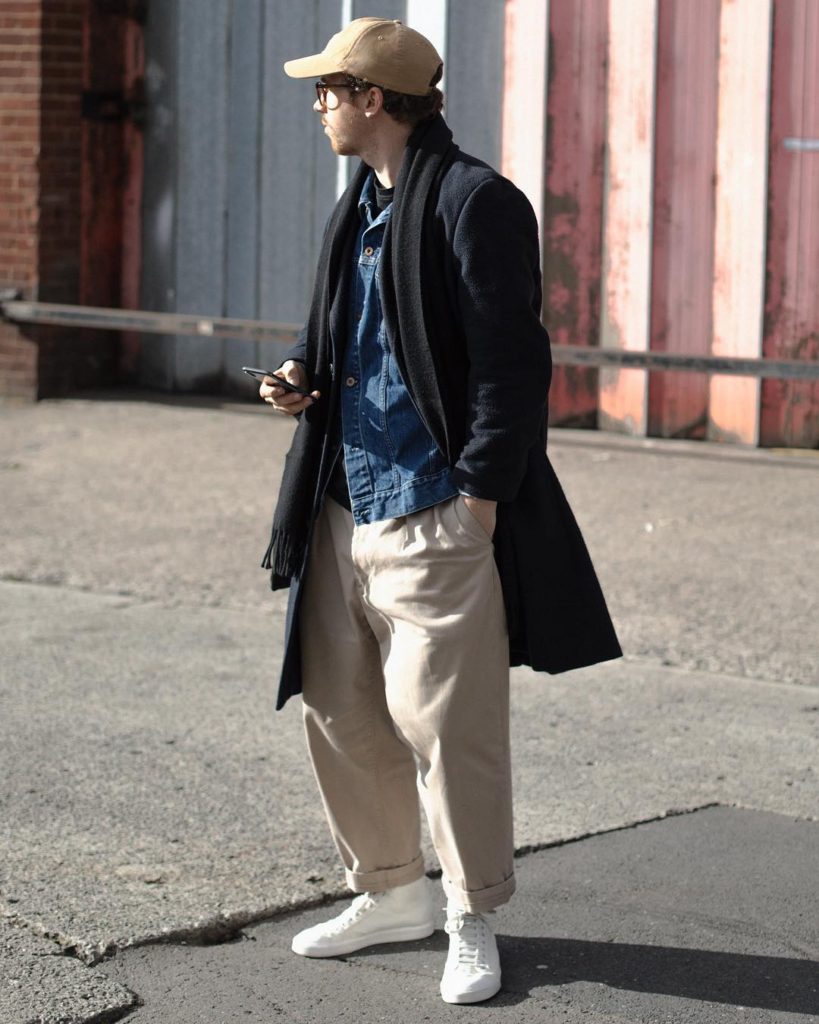 Dan’s photos are pretty instructive, I think, for how to construct a look in full rather than just finding the dopest coat you can find and throwing it on over what you’re already wearing. I’m not suggesting you ditch your wardrobe and buy one like Dan’s, but to consider what shapes in your dresser would work together.

The palette, texture, and consistency in Dan’s photos is also admirable. He relies a lot on tan, blue, and gray, and regularly mixes in black. The coats he wears are primarily a houndstooth wool mac from Private White, a couple of Uniqlo/Lemaire overcoats, and an Our Legacy fuzzy black single breasted overcoat, and a raincoat from Stutterheim. But he wears a variety of other layers — vintage military shirts, hooded and crewneck sweatshirts, and a denim trucker jacket; rarely if ever a traditional sportcoat. I appreciate that the overall look doesn’t fall neatly into the standard buckets of heritage, Ivy, workwear, skate dad, etc. 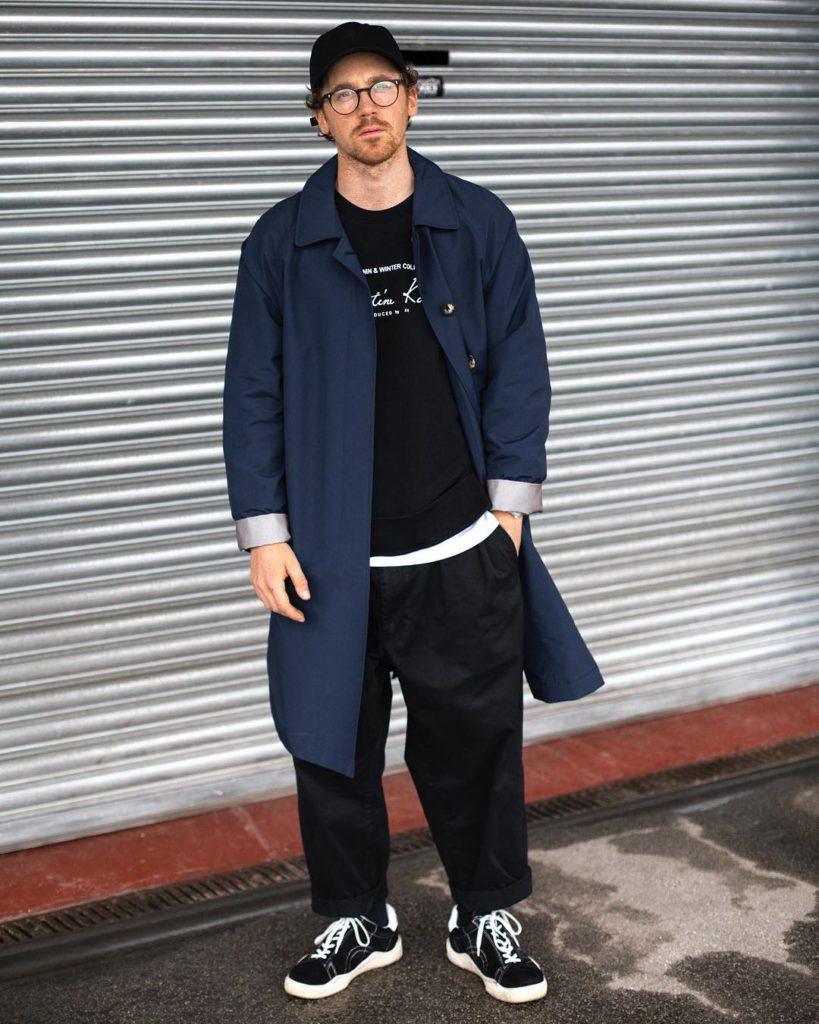 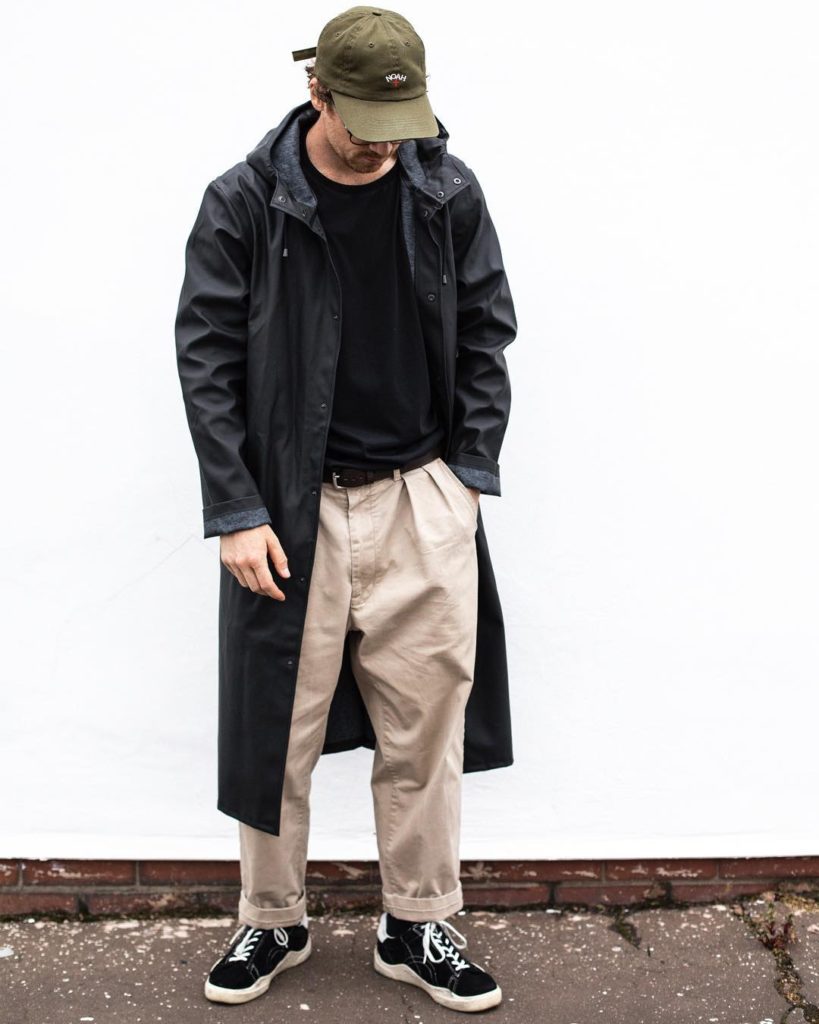