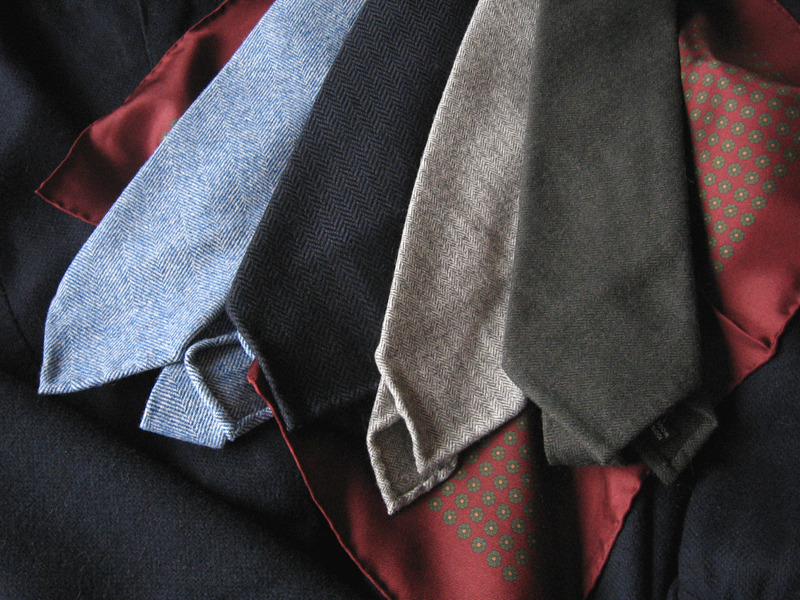 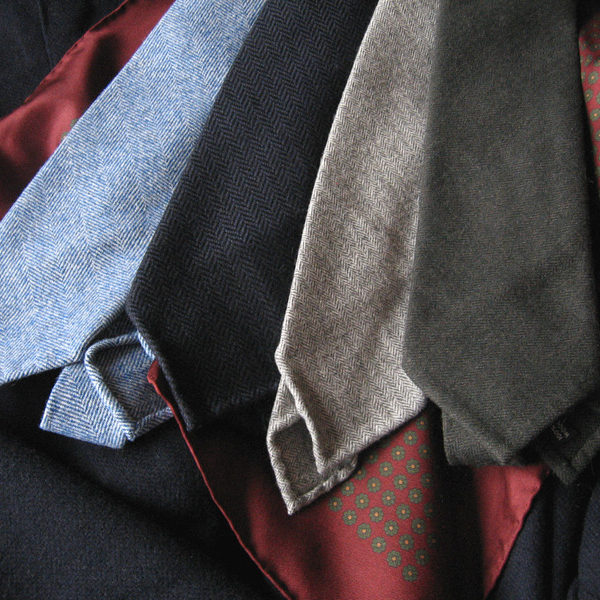 I remember having this mid-grey, wool herringbone tie by Thom Browne when I was in my mid-20s. It was lightly lined, untipped, and featured handrolled edges. I wore it with everything back then – brown tweeds, navy sport coats, and a charcoal double windowpane jacket that I inherited from my father. It was one of my favorite ties, until it got ruined in a greasy lunch accident.

Wool herringbones ties are still some of my favorites, especially for winter. Wool has the advantage of reflecting the season’s mood, just like how cotton and linen do for summer. Solid wool ties with a slight mottling to them, like these from Drake’s, are very versatile, but if you just want a bit more pattern, try herringbones. They’re good for when you’re not sure whether to go for something solid/ semi-solid, or a straight-out pattern, such as a rep stripe. This is helpful if you, like me, enjoy dressing well, but don’t want to spend too much time in the morning trying to figure what can be worn with what. Depending on the scale of the herringbone, these can be successfully paired with almost any kind of shirt and winter sport coat you can think of (barring except maybe a herringbone coat that looks too similar). Just stick with something mid-scale: a slightly noticeable pattern, but not so large that it could compete with other elements in your ensemble.

The three best places I know of to buy one (at the moment)  are Drake’s, E&G Cappelli, and Marshall Anthony. The first two makers are pretty well known, but the last is a bit of a newcomer to the neckwear industry. I thought they made pretty nice ties when I first reviewed them, but they’ve come even further in their quality over this past year.

The color selection for Drake’s wool herringbone ties is a bit limited on their website, but you can find more options through A Suitable Wardrobe. Linkson Jack also sells some E&G Cappellis at slightly lower prices if you don’t need something custom. For something more affordable, try Mountain & Sackett. They do pretty good end-of-the-season sales, though not all of their stock is always included.