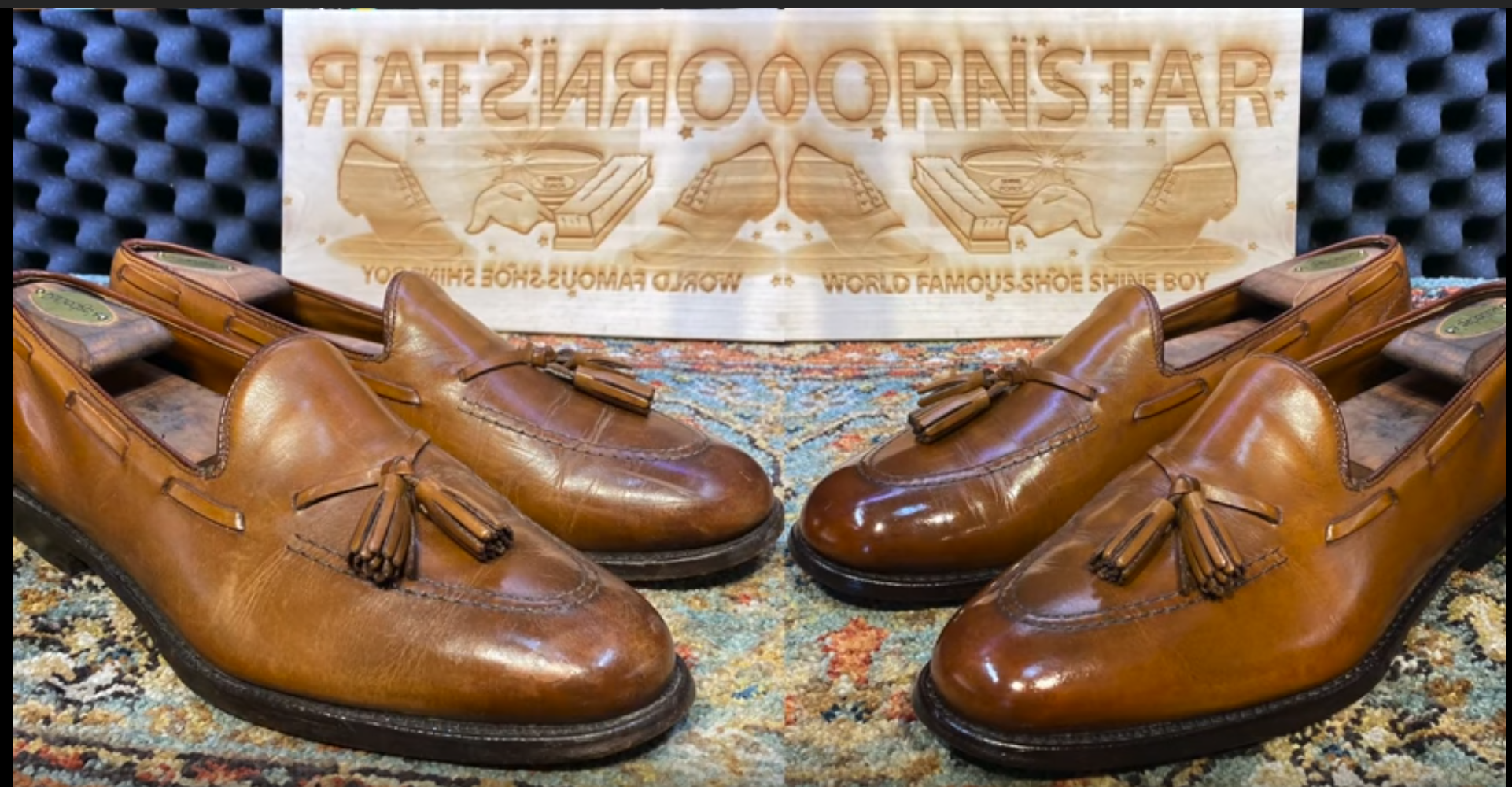 We don’t generally engage with things we don’t “get.” I still feel a little shame to admit I have never once seen what I’m supposed to see in a magic eye image (I just tried again and came close with a Dave Matthews Band album cover; apparently my failure may mean I’m a little wall-eyed). It’s not a surprise that I’ve never bought a magic eye poster, their images are forever hidden from me. Similarly, I don’t get ASMR, and although I’ve tried listening to and watching ASMR content, I’ve never sought it out because I felt, well, it’s for someone, and that someone is not me.

ASMR, short for Autonomous Sensory Meridian Response, is a hard-to-define sensation that people started trying to define about a decade ago. It’s a tingle, or a shiver, or something else, but it’s generally agreed that it’s a physical sensation, often accompanied by more abstract feelings of comfort or relaxation. Triggers and effects vary from person to person — some people seek out particular sounds (like whispering, or a pencil scratching against the paper; often something quiet but close-sounding) or physical touch. And some report momentary but intense tingles, euphoric enough to justify the significant time spent seeking them out. Others say the quiet, even sounds ease them to sleep.

The main cultural channel for ASMR-inducing content is Youtube, where seekers can find their taste in ASMR catered to. Being catered to is itself maybe one of ASMRs subgenres — personal attention seems to be a factor in ASMR. Many ASMR-tagged videos use role-play, and intend to be immersive; viewers are being tended to.

Another broad subgenre is task or skill-focused. It’s not really a surprise that watching and listening to someone complete a discrete task, often with a high degree of skill, is relaxing, but calling it ASMR is a recent phenomenon. This video, a short documentary on Japanese printmaking, is cited as accidental ASMR. The most common point of reference here is Bob Ross, who wasn’t aiming for ASMR but whose manner, calm narration, and gentle palette scrapes have long been a balm for many.

The Bob Ross of Shoe Shining

Which brings us to the Bob Ross of shoe shining.  Scroll through Jason Dorn’s 200 or so Youtube videos and hundreds of comments and the comparison comes up again and again. Dorn’s canvas is well-worn shoes and his mediums are saddle soap, cream, and wax polish.

I spoke with Dorn about his career and approach to shoe shining. He’s a shoe guy first and an accidental ASMRtist. “I really just got lucky. I started making videos 4 years ago, and some of the comments early on said ‘Hey, this is ASMR,’ and I had no idea what it was. When people told me it was helping them sleep, I started to take it more seriously.”

Most of us approach shoe care as a necessary time suck, worth doing well but, essentially, a chore. When you think about it, though, it can be an intense sensory experience. The feel of the leather, the solvent odor of wax polish, the sh-sh-sh of chamois. Dorn and other world-class shiners (he titles himself “shoeshine boy”) take a craftsman approach to the work, and the soothing sounds are a happy byproduct.

As Dorn made more videos, more ASMR fans tuned in. “The various steps have a kind of ritual, storyline, and zen-like energy. It’s a little unique in the ASMR world. I just happened to stumble upon it, and I definitely don’t take it for granted.”

Commenters like the sound of Dorn’s voice and the sweep-sweep of brushes on leather, but also find appeal in the more subtle sounds of shoe shine. The opening and closing of tins of wax, application of edge dressing, even the lacing and unlacing of the shoes. Recorded on quality mics and delivered binaurally, these sounds contribute to ASMR. The ASMR aspect of it, though, is an outgrowth of Dorn’s lifelong care for his shoes.

“When I grew up in Minneapolis,  I couldn’t have any shoes I wanted. Cool shoes were important. Early on I was taught to take care of what was on my feet because I was only going to get one nice pair a year because that’s all we could afford. So I’d get a pair of Nikes, and I’d clean them in my kitchen sink with a bar of soap and a toothbrush. So early on that sort of ritual was in my brain.”

Dorn worked as a shoe salesman at Nordstrom for about 10 years. Bored with selling, he took a job shining shoes there, and, as he says, caught the bug. “I’m still learning, I’m always learning about products and approaches, and certain waxes, letting them do the work.” 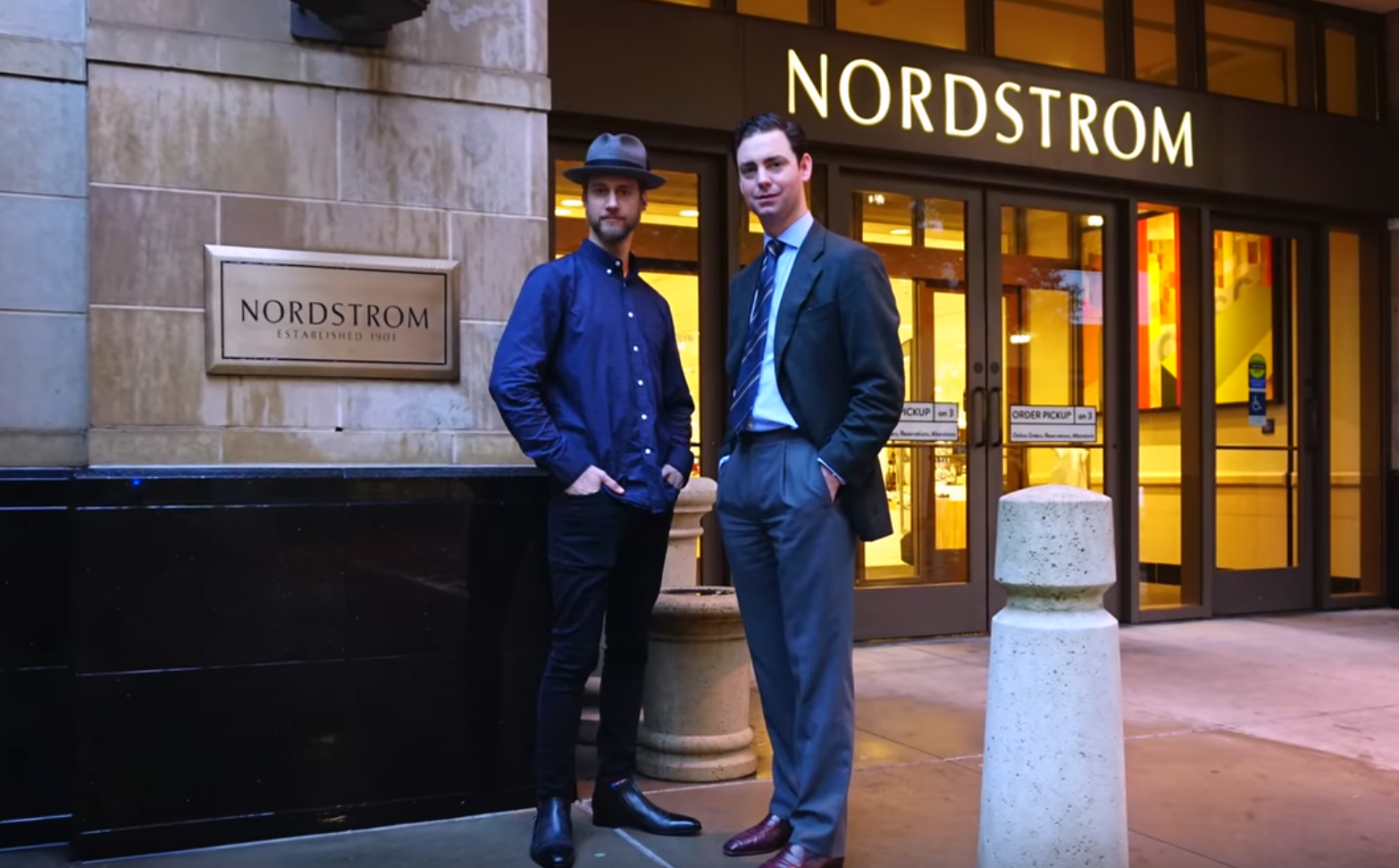 Jason Dorn, left, with Kirby Allison of The Hanger Project.

After a couple of years filming primarily on his phone camera, Dorn upgraded his home shoe shine studio last year, and it’s something to behold. He and a friend converted shelves in a corner of his apartment to hold a rack (two expandable metal shoe molds), shoe care materials, mics, and cameras to better capture the process. “I’m lucky to have a good friend who I can bring ideas to and he’ll execute.” With the shoe racks fixed, “I can really go ham on those shoes with my brushes.”All of it is lined with soundproofing to isolate the hushed tones of the shine work and Jason’s description of what he’s doing. 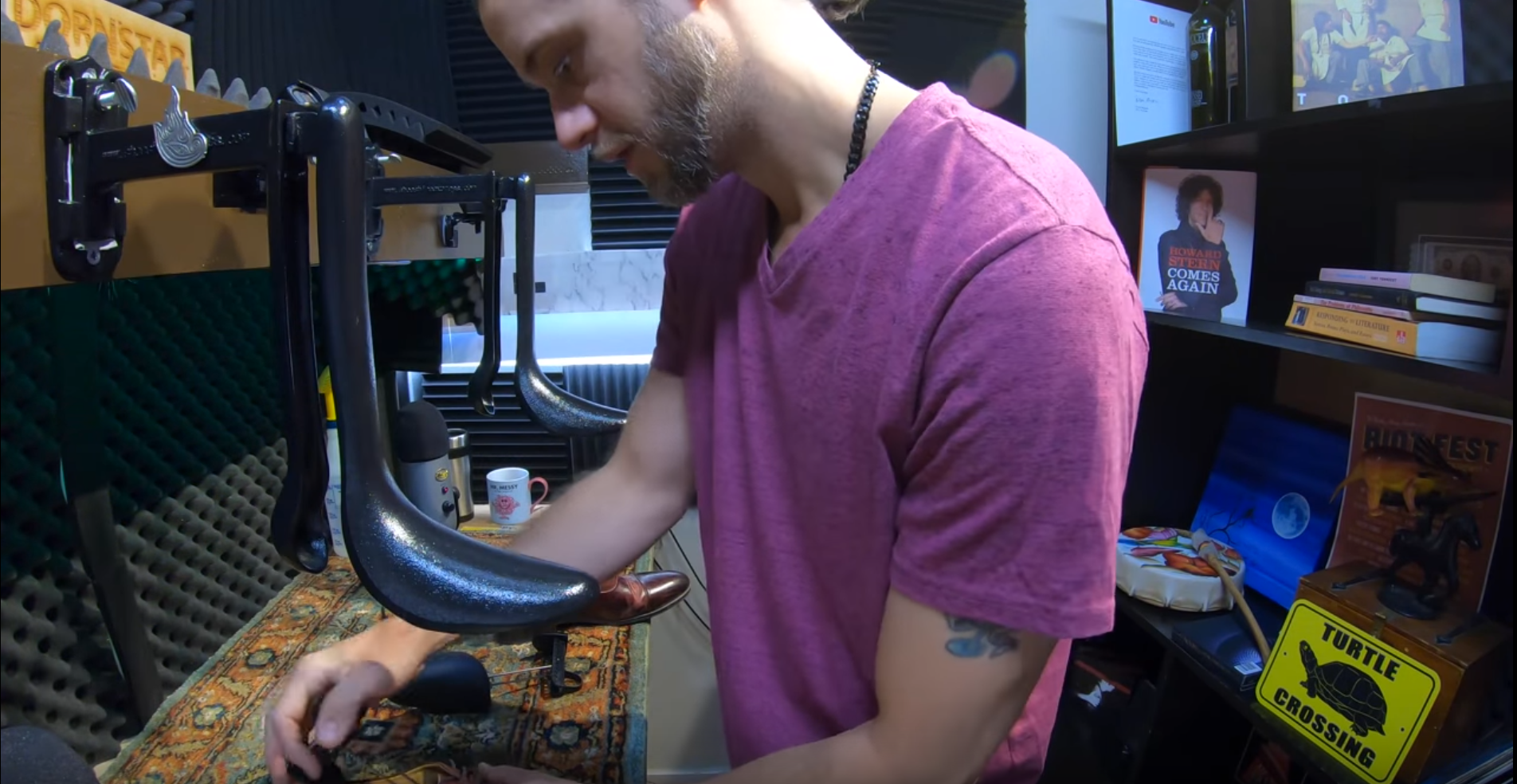 Dorn at work in the soundproofed shine palace.

Most of Dorn’s videos document a similar approach, which can take from 10-20 minutes, but it depends on the shoes. “I definitely try to keep shoes hydrated, especially here in Denver,” where Dorn lives now. “It’s so dry out here. When I get a pair of shoes out, usually I hit them with saddle soap, clean them up real good. Get some cream polish on there and let it soak in. Take some time to buff it out with a soft cloth or a good set of brushes. While that cream is soaking in you can take the opportunity to hit the edge dressing if they need it. Once the leather dries, buff it and buff the edge dressing. Then a couple of layers of wax and really let the shoes start to glow. Getting a proper wax buildup shine is an art.”

If he had one tip for people? Keep your shoes hydrated. “When they dry out they start to crack. Polishing, using shoe trees, anything to prevent creasing across the vamp and preventing them from essentially rotting inside.”

Dorn doesn’t care for dress shoes exclusively. His videos cover care for Gucci sneakers, Jordans, and others. You can see the results at the end of his videos if you’re still awake — for many viewers, sleep is the goal.

Dorn says he has about 20 pairs of shoes himself, about 15 pairs of dress shoes, and mostly rotates among 4 pairs — black is what he prefers for work. His first pair of nice shoes were Allen Edmonds, and he now prefers more unusual shapes and leathers for himself. “I focus on statement pieces that are still classic — I have a pair of devil ray pebbled texture boots from Mezlan. I definitely like the Spanish and Italian designers, what they come up with, the soles that wrap up a little bit, unique patinas, color patterns. Magnanni, Berluti, Maison Corthay. I’ve seen a few of those that really turned my head.”

Dorn has used many types of products over the years and has some recommendations. Saddle soap, he says, is pretty universal. “If you’ve got a glycerine-based saddle soap, that’ll work pretty well.” For waxes and creams, Dorn “Grew up on Meltonian. Once that went off the market, it was an experiment to see what works best. I found Saphir through recommendations from other shiners.” 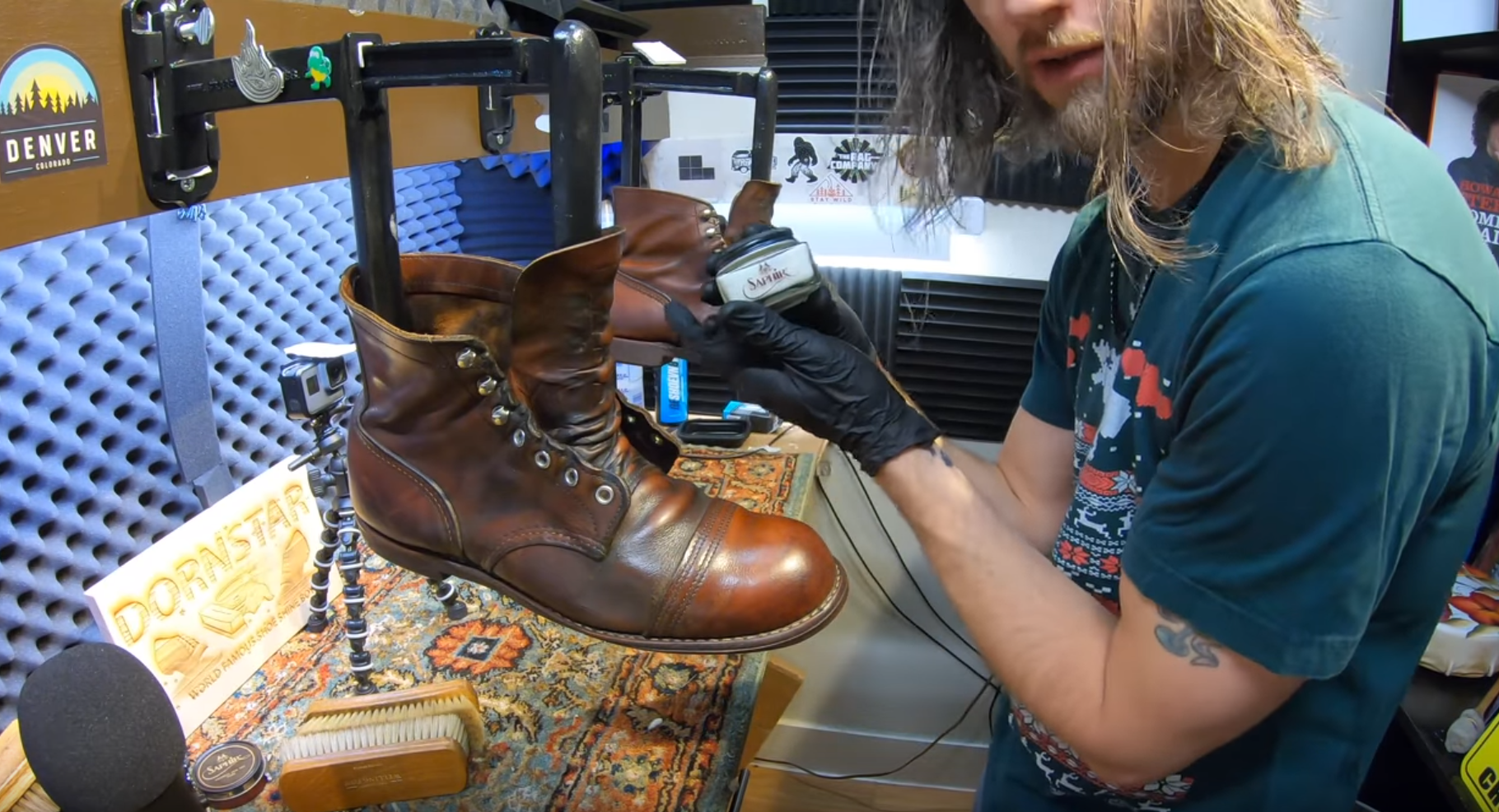 Dorn applies a coat of Saphir leather cream to a pair of Red Wing boots.

He says different polishes have different ingredients and respond better to different approaches. “I’m learning to use this water dauber that many shiners, particularly in Japan, use. I put a little bit of alcohol in there. It does this sort of thing with the wax that melts it down and it spreads easier, and you use a cotton chamois with two fingers and buff it out. I’m used to having the shoes on the rack and using that side to side motion. With the other approach, the shoe is on the table and you’re holding the shoe in one hand and buffing it with the other.”

Overall, he says, not rushing it will benefit the shoes. “When you’re using something like Saphir Medaille d’Or high gloss wax, allowing that turpentine to evaporate before you buff it out makes your job a lot easier. Otherwise you’re just going to be smudging around the wax. Setting aside 20 minutes or half an hour is probably the best practice. Holding the shoes or working on a table is not going to have the ergonomics or efficiency of shoes on a foot or shoes on a rack, so take your time.”

Dorn is focused on his Youtube channel as well as his off-camera work. He’s currently partnered with Cobbler’s Plus in Denver, with the intent of taking over high end shoe care in the Colorado. He’s home now practicing social distancing, and expects his next few videos will deal with shoes in his own collection.