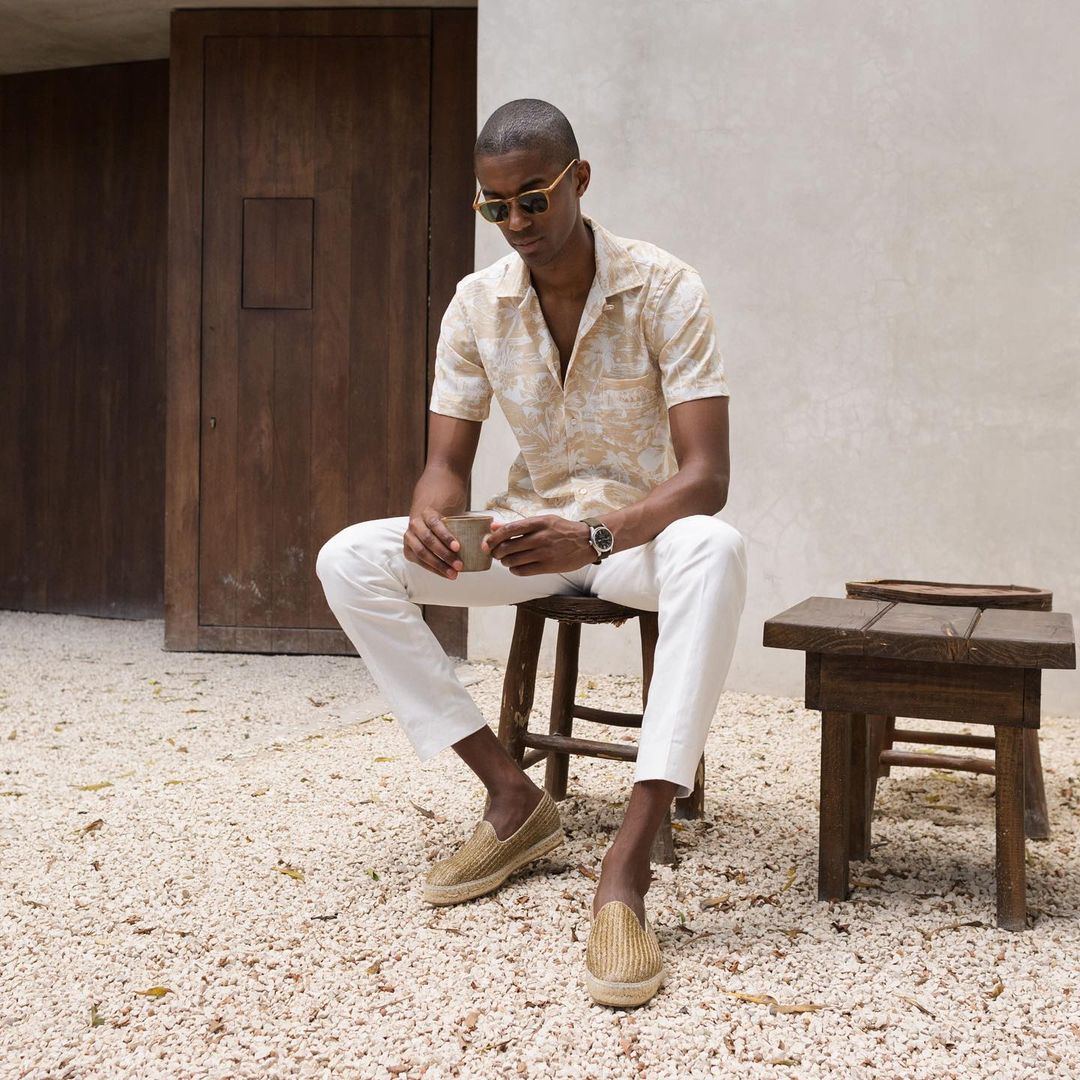 We couldn’t be more appreciative of our sponsors. As an independent menswear site, they’re why we’re able to keep the lights on. So, twice a month, we like to give them a special shoutout to recognize them for their support. Doing so also allows us to update our readers on our sponsors’ latest happenings.

Most men at this point have a pair of basic khakis, blue jeans, and possibly even some grey flannel trousers in their closet. But for summer, it’s also nice to have a pair of white pants. Whether made from linen or cotton, white pants can be intimidating at first if you’re not used to wearing the style. They are, admittedly, sometimes a bit bright, which can draw the eye downward. Most of us are used to having the focus of an outfit be on the upper half.

However, white trousers can be the perfect foil to pale, neutral tones, such as the tan shirt and woven slip-ons you see above. They’re also a natural complement to many of the colors you likely already have in your closet, such as olive green, deep browns, and most of all, blue. A pair of white trousers can look great with a dark denim shirt or light-blue oxford cloth button-down. Proper Cloth has white tailored trousers this season in nearly every material imaginable — cotton-linen canvas, Irish linen, heavy stretch cotton, and of course, denim. If you’re still feeling a bit shy about them, consider Proper Cloth’s off-white pants in Bedford cord, linen-cotton, or stretch cotton. Any of these will go with their new summer collection of made-to-measure shirts and casual sport coats. As for any fear about getting white pants dirty — rest assured that they only look better with some slight dirt stains. 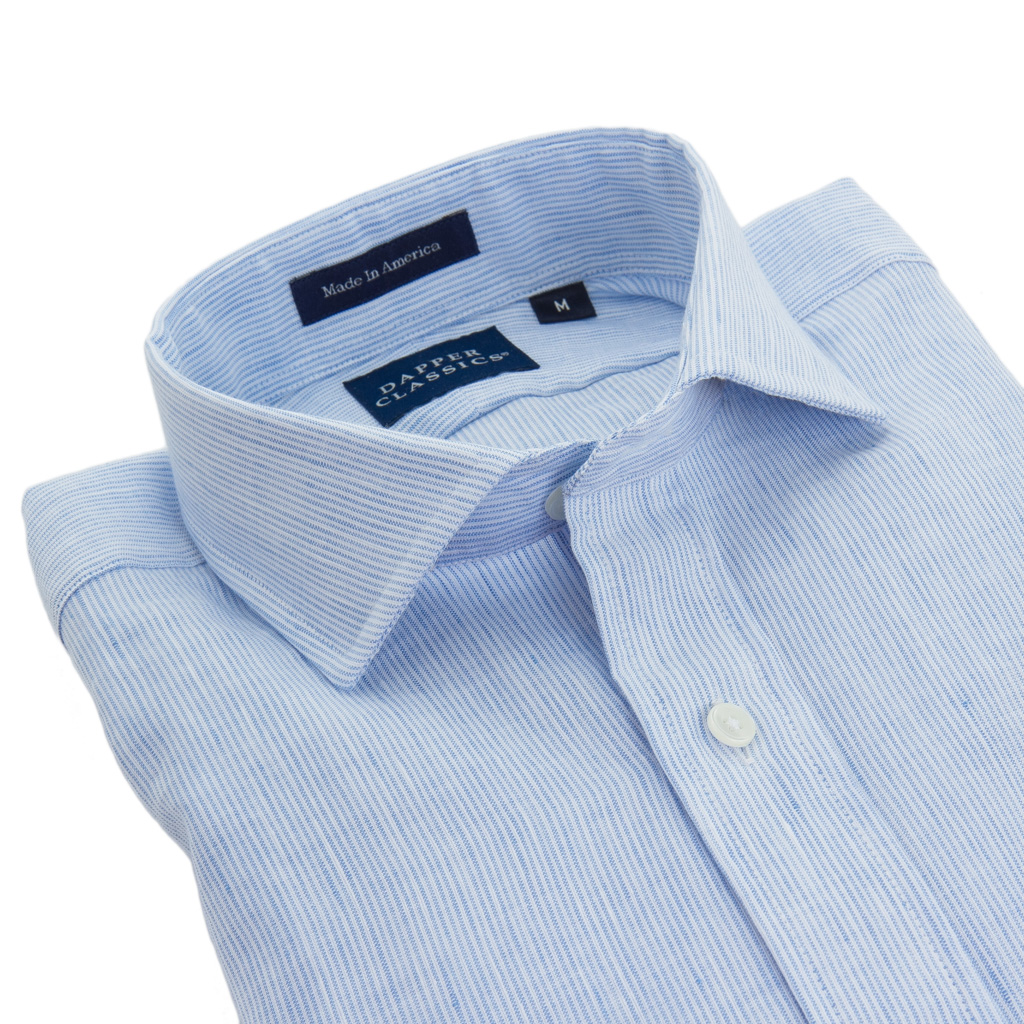 A couple of weeks ago, I was on Brooks Brothers’ website, looking at their oxford cloth button-downs. For decades, these shirts were made in America at the Garland shirt factory — a symbol of American manufacturing and style, if there ever was one. After all, it was Brooks Brothers that invented this quintessentially American style. Sometime in the 1990s, however, they started to produce some of their shirts abroad, while keeping their core product at home. But when the company shut down its Garland shirt factory last year, all shirt production was moved overseas. On the inside collar of their iconic button-down — visible even on their website — you can see the label read: “The Original Polo Shirt. Made in Malaysia.”

There’s nothing inherently wrong with overseas manufacturing, of course. But there is something special about producing things at home. Since their founding, Dapper Classics has been committed to producing as much as they can in the United States. Their socks are made at a third-generation, family-owned mill in North Carolina. Their ties are made in New York. Their trousers are made in Fall River, Massachusettes. This week, they debuted yet another line made in the United States — sport shirts. Cut and sewn in New England, these shirts feature a spread collar, barrel cuffs, and a trim fit. Dapper Classics has them in various patterned oxford cloths, along with a cotton-linen blend that will give you the comfort of linen without as many wrinkles. 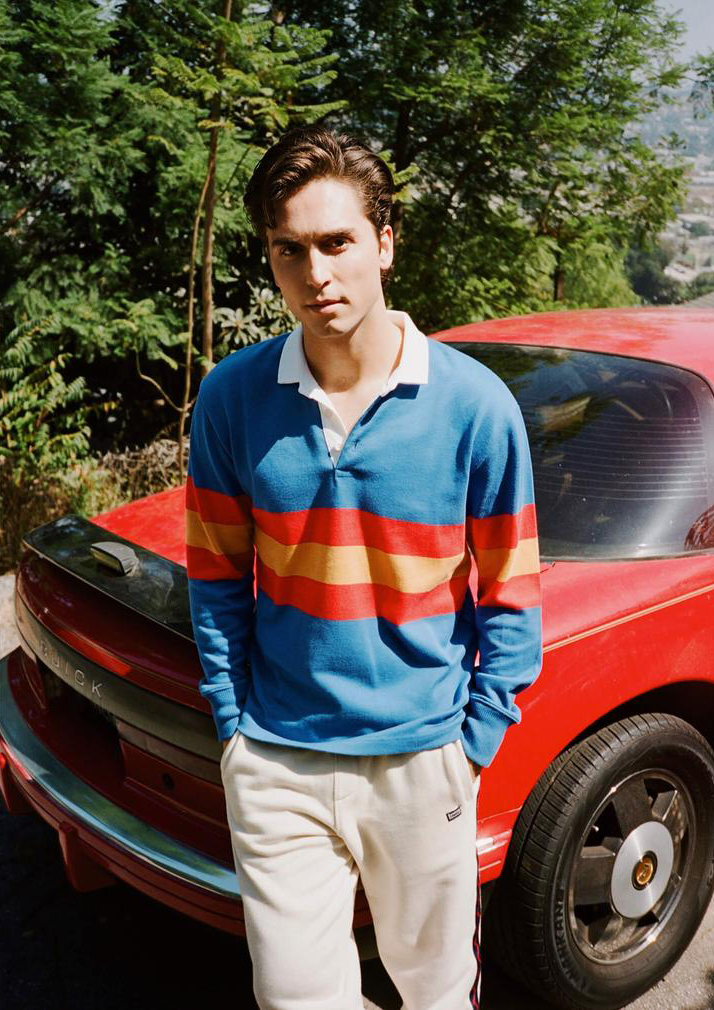 This past week, GQ writer Jason Diamond penned an article about the return of “yuppie scum style” (which is basically prep by a different name). The heart of the article is about how young companies such as Noah and Rowing Blazers are bringing in a new generation into the style by washing prep of its elitist connotations. Many of their ad campaigns feature people of color. Their styling and designs often have a hint of streetwear. In remixing prep, they’re helping to keep it alive.

This season’s new Rowing Blazers’ collection is full of examples. When browsing through their website, you can find classic prep staples, such as the trousers, shirts, and shorts made from colorful Indian madras. The company also has various takes on block striped rugbys, including the blue/ red/ gold colorway you see above (inspired by an iconic design once worn by rock climbers). This past week, the company introduced new colorways for their Princess Diana-inspired sweaters. The Black Sheep sweater is now available in green; the “I’m a Luxury” knit is available in pink/ gray.

At first blush, many of these pieces seem like they can only be worn to Martha’s Vineyard or a New England boathouse. But a quick look through the “tagged” section of Rowing Blazers’ Instagram reveals how people are wearing such pieces in different ways. Eric wears Rowing Blazers’ coats with fatigues and desert boots; taeheon_0509 pairs a rugby with a patchwork Drake’s field jacket; Pythagore wears a pullover with white jeans and ’70s style aviators. There are also a ton of guys and gals who just want to say they’re a luxury. The “tagged” section of Rowing Blazers’ Instagram shows how diverse this field has become, both in terms of who’s wearing prep and how the pieces are styled. 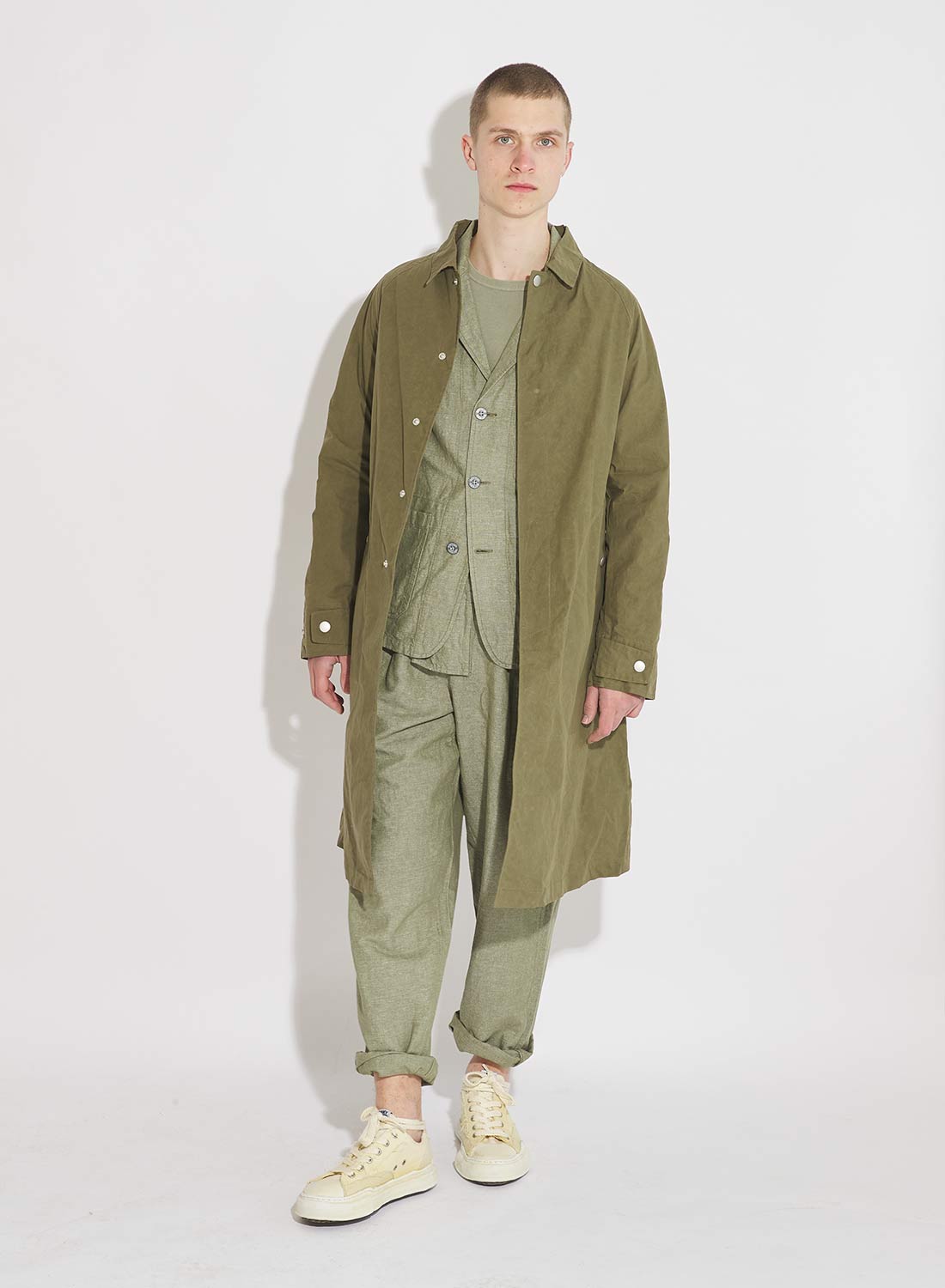 The market for raincoats can be roughly cleaved in half. On one side, you have classic pieces, such as the single-breasted macs you’ll find at Macintosh and the double-breasted trenchcoats at Burberry. On the other end, there are technical designs from the likes of Arc’teryx. Classic raincoats can be great if you’re looking for something to layer over a Shetland sweater and/ or a suit. Technical raincoats, on the other hand, are better for more modern stylings. But if you’re somewhere in between, there’s often not much available. It’s hard to find a classic, casual raincoat that you can pair work workwear or riffs on Americana.

Our newest sponsor, Nigel Cabourn, has a solution in the form of a washed Army coat (available in olive and navy). Inspired by the many photos of British Formula 1 racing car driver Mike Hawthorn wearing long coats over suits during the 1950s, this full-length coat is made from a lightly waxed cotton poplin woven by Halley Stevensons in Dundee. The material is water repellant without being suffocating, while the spacious hip pockets are big enough to store even a collapsible umbrella. As a designer who has always been committed to producing the best, Nigel Cabourn also had these coats made at the Mackintosh factory in England. Until the end of the month, the company is offering them at a 25% discount — $456 instead of $612. You can find other discounted items in the sale section of their website. Included are some dungarees ($271+), Mihara trainers ($283), chore coats ($221), checked summer shirts ($147+), and a US4 jacket in summer camo ($407). 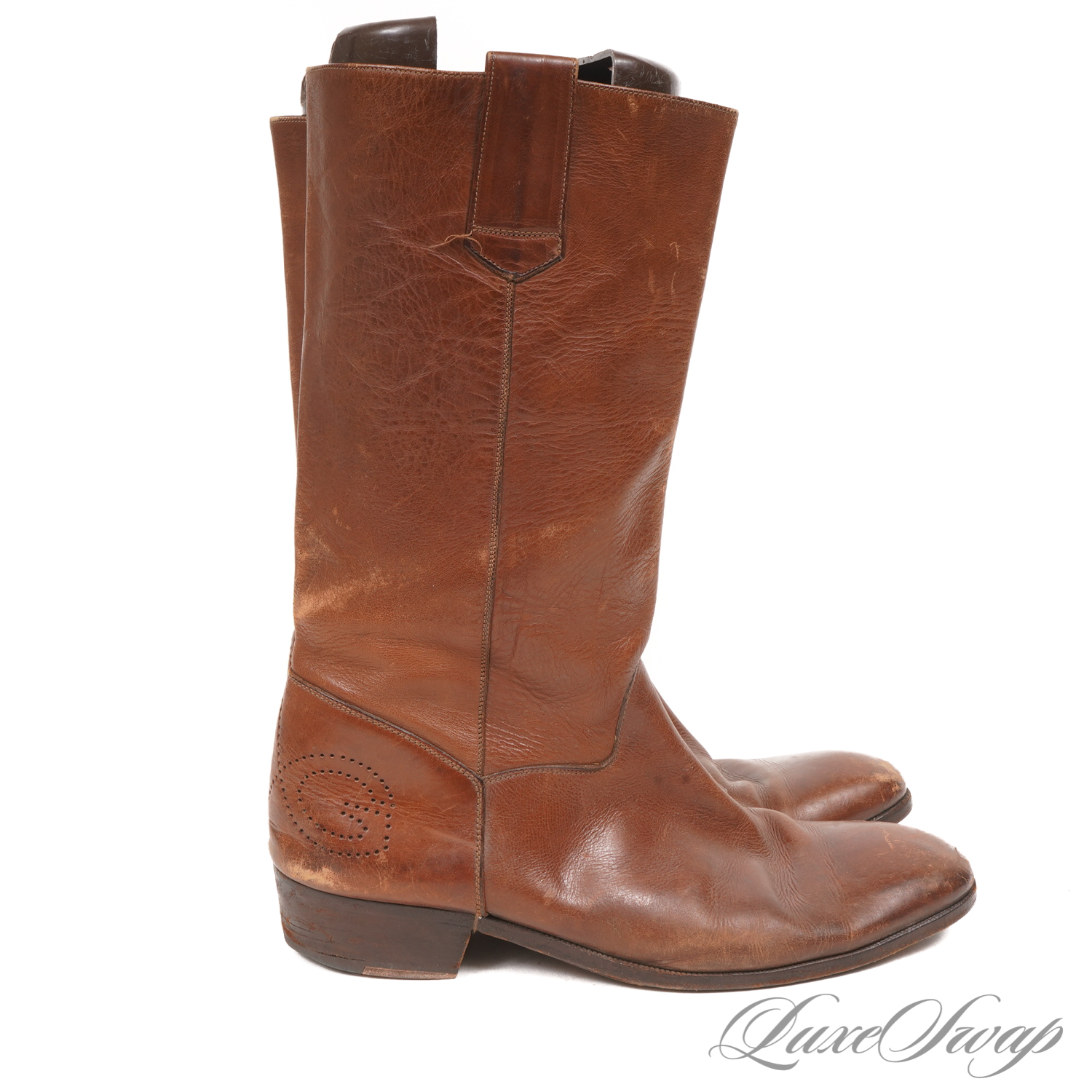 Every Thursday, LuxeSwap throws up a new round of auctions on eBay. Included are high-end labels, hard-to-find sneakers, and gently used items from admired shops such as No Man Walks Alone. But what many people don’t know is that they also use other platforms, such as AuctionNinja. Over at the AuctionNinja listings now, you can find a bottle of Issey Miyake fragrance, espadrilles in every color, and a “very online” t-shirt. Perhaps best of all is this pair of vintage Gucci boots, estimated to be from the 1980s. These have a canted heel, slightly squared-off toe, perfectly patina’d upper, and decorated heel cup. They can be worn with jeans or tailored trousers, and then paired with a chunky sweater and loose topcoat for that sexy 1980s vibe.

Over at their eBay page, you can also find Edward Green shoes, Drake’s sport coats, Bryceland’s shirts, Post Imperial summer button-ups, and Margaret Howell sweaters. Ralph Lauren collectors will want to browse through the 150+ auctions up right now, which include Fair Isle knits, gambling shirts, preppy ties, leather jackets, and Polo Bear sweaters. Lastly, don’t forget, to find the best of the best, you can also do a search for #1 Menswear.