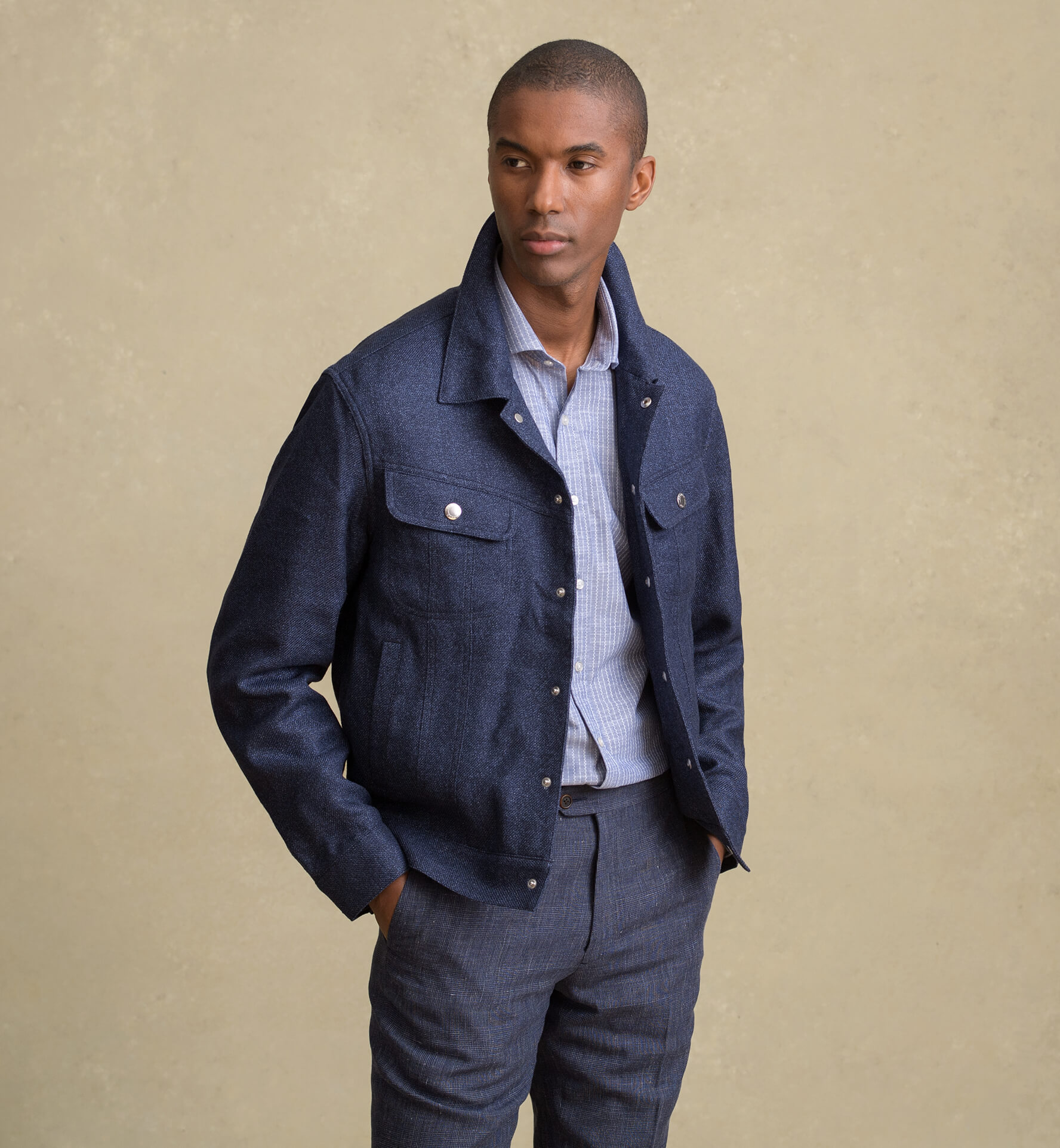 As an independent menswear blog, we’re thankful to have sponsors who support our work. So, twice a month, we like to give them a special shoutout. Doing so allows us to recognize them for their support, as well as update readers on our sponsors’ latest happenings.

Now that the weather is beginning to get warmer, many of our sponsors are starting to get their new spring arrivals. Over at Proper Cloth, you can find options for both the tailored and casual side of your wardrobe. Among the tailored items, there are Waverly suits available cotton Solaro, pure linen, and crunchy wool blends. Since many of these suits come with casual details — such as softer shoulder construction paired with patched hip pockets — the suit jacket can be easily worn as a sport coat. Pair these with grey tropical wool trousers, tan chinos, or even a pair of beat-up jeans. The two-in-one styling gives you more options in the morning.

For casualwear, Proper Cloth has unlined trucker jackets made from linen hopsacks, melange wool-blend twills, and densely woven beige linens. As a reimagined trucker jacket, this gives you some of the ruggedness of the workwear originals, while allowing you to have something dressy enough to pair with oxford button-downs and tailored trousers. The collar can be popped from the back, while the side-entry hip pockets give you space for extra storage (many truckers don’t have this detail, and no interior pockets, so you then have to rely on pant pockets). Like everything Proper Cloth sells, this comes in a wide range of sizes — here from small to 3XL, and then in regular and tall lengths. 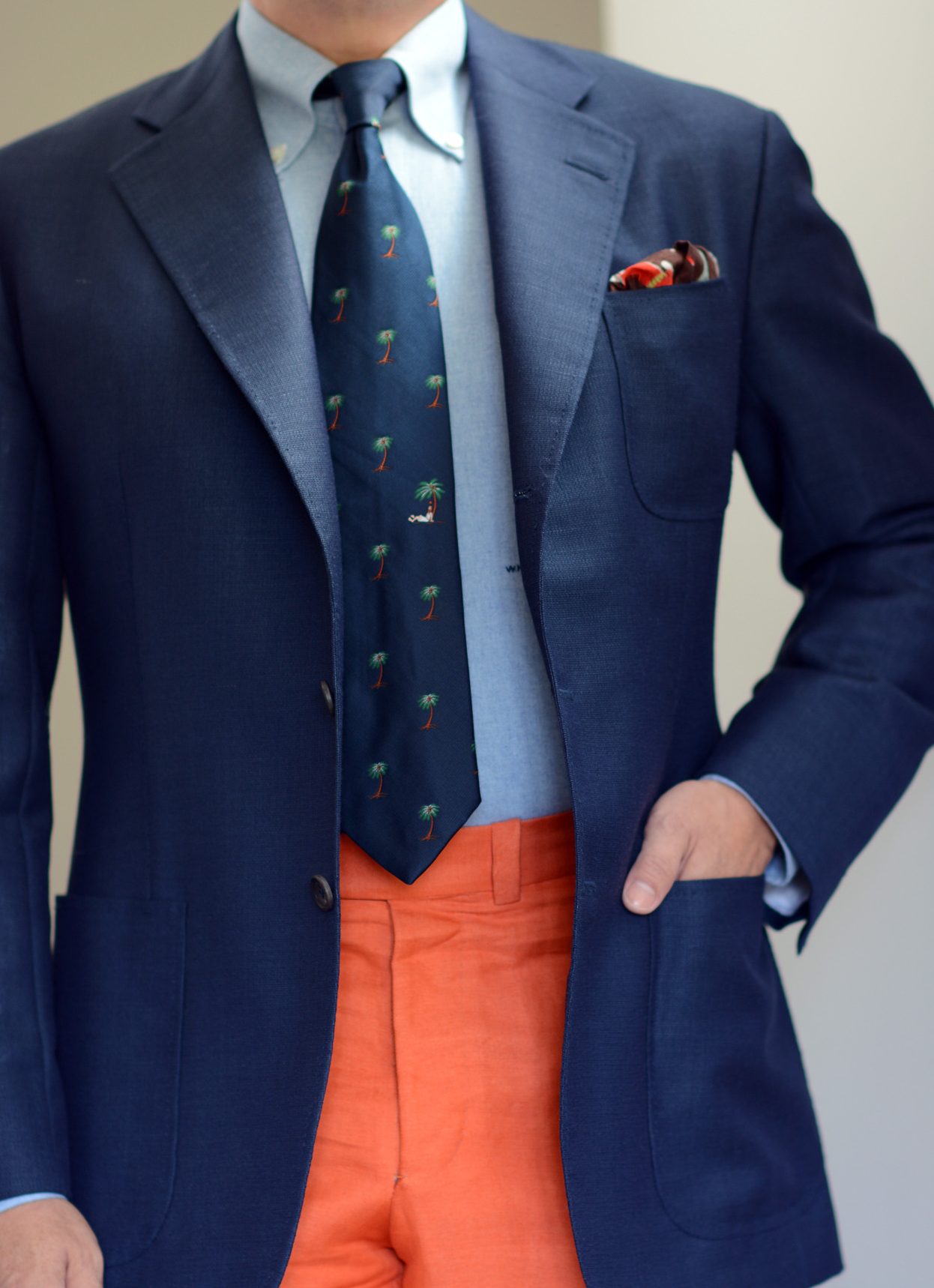 Paul Winston, the proprietor of Winston Tailors and Chipp Neckwear, likes to say that his family’s company serves a more traditional-minded customer. But since the company’s founding in 1945, they’ve also made some pretty wild clothing. Paul’s father Sidney was known for producing things such as patchwork tweeds, madras trousers, and sport coats with vivid linings. And shortly after Paul joined the family’s company in 1961, he designed a small line of clever, pictogram neckties. The difference between sophisticated humor and bad taste, Paul tells us, is always “who and where.” “A chairman once gifted my ties to his board members, and that was considered good humor, but when the same ties are found at Nordstrom, they’re considered bad taste.”

A cheerful, novelty tie can be worn with upbeat Fresco sport coats and colorful chinos if you’re daring. Alternatively, you can also wear them with more conservative navy jackets and grey trousers to add some lighthearted humor. They’re too whimsical for the office, but good for garden parties, brunches, and other cheerful gatherings (plus, a tie like this will give you something to look forward to. Eventually we’ll be able to have such gatherings again). Prep, especially, has always been about having fun with your clothes. 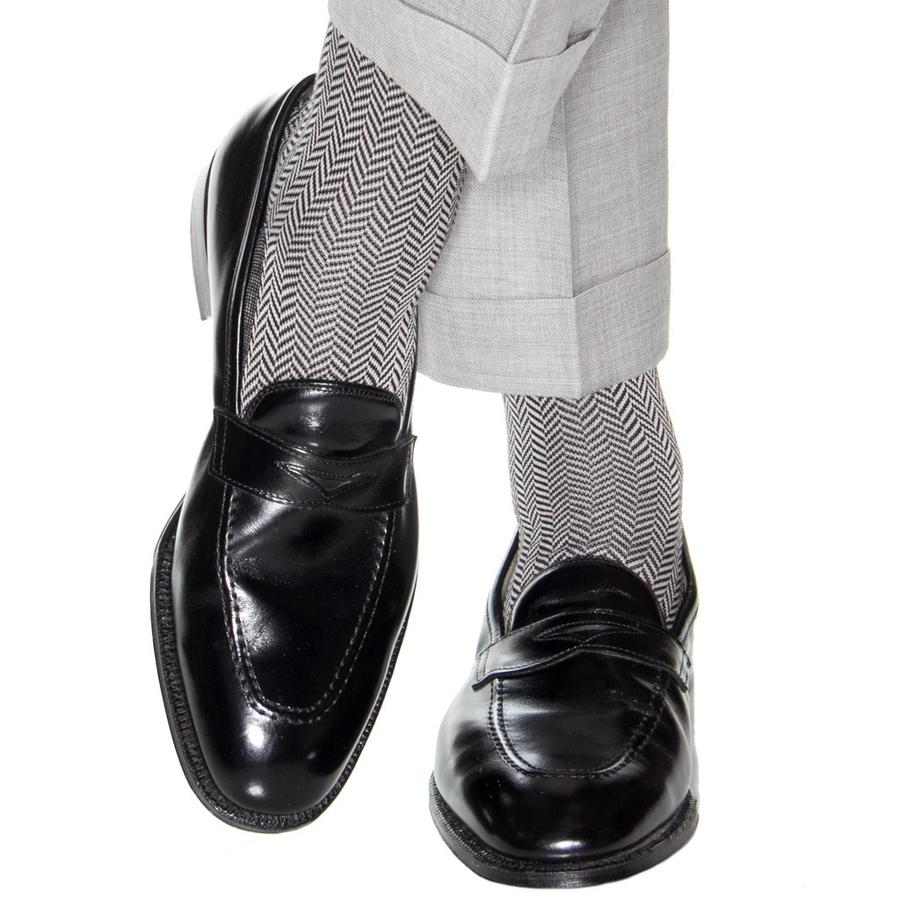 For guys who wear tailored clothing, navy over-the-calf socks are about as close as you can get to an actual wardrobe essential. Navy socks go with everything: suits and sport coats; tailored trousers in olive, tan, brown, grey, and of course, navy. They are the failsafe option. If you’re just starting to build a wardrobe, consider getting fourteen pairs to get you through two weeks before laundry day.

If you want to add some variety, however,  start with some basic and subtle designs. This season, Dapper Classics has options in houndstooth, herringbone, birdseye, and nailhead. The subtle designs allow you to add visual interest to an outfit without making your socks the center of attention. Such designs are good when the rest of your outfit is quite minimal — say, a navy sport coat paired with a solid colored shirt and no tie. At the same time, Dapper Classics also has cheekier motifs for casual wear. Their dog motif socks go well with Barbour’s walking coats and moleskin trousers, while the USA flag socks are perfect for the Fourth of July and election days. 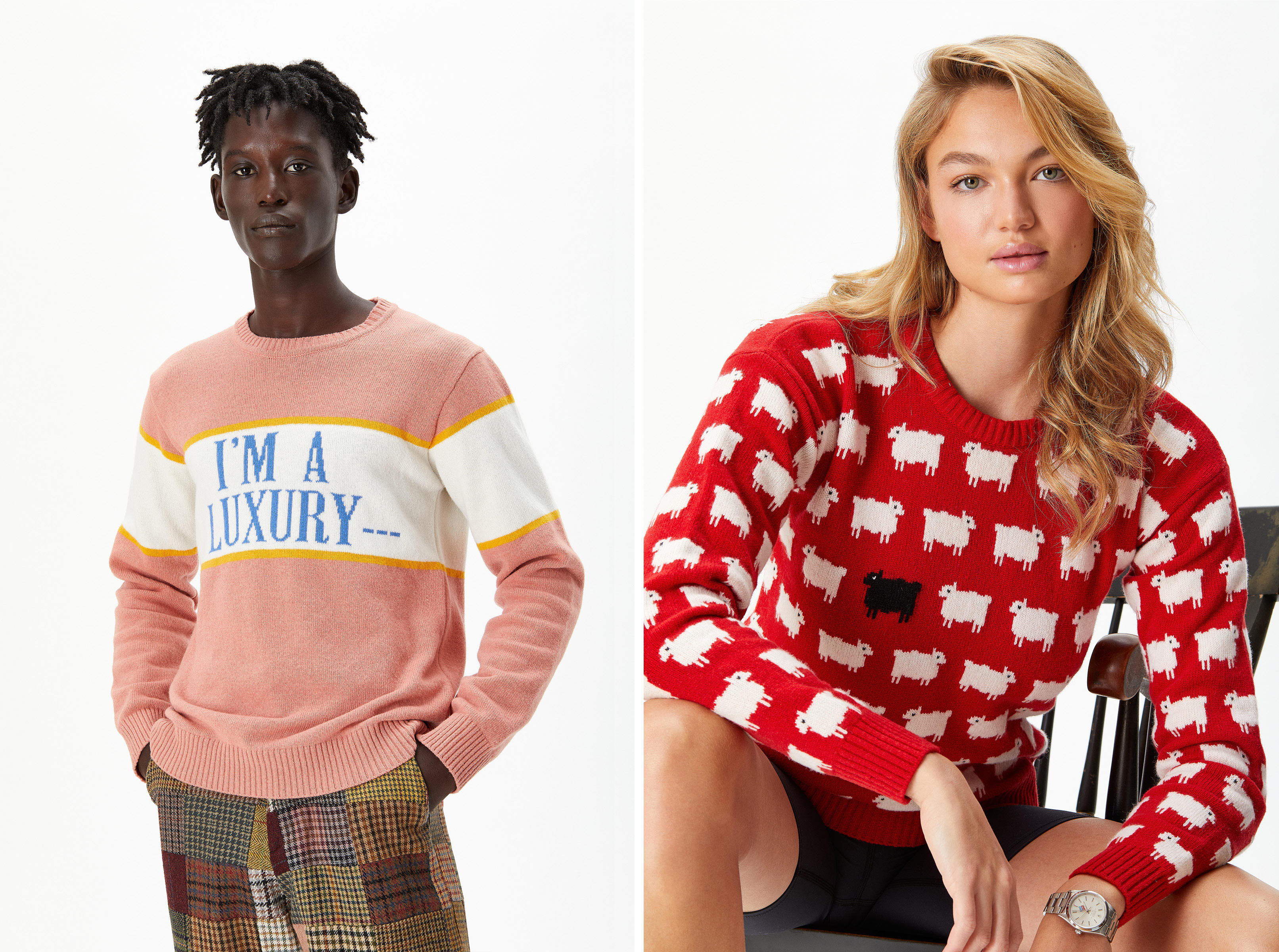 During the 1980s, the Sloane Rangers were the British equivalent of American preps. They embraced things such as waxed cotton Barbour jackets, tattersall shirts, and Hunter boots as part of an upper-middle-class look, partly inspired by photos of the newlywed Charles and Diana wearing theirs while at their country home. But the most iconic pieces associated with Princess Diana are these intarsia sweaters you see above, which have been recently brought back by Rowing Blazers.

One of them is the “sheep sweater,” a red knit jumper emblazoned with rows of sheep (including one black sheep) designed in 1979 by two young women in their twenties, Joanna Osborne and Sally Muir. Their label, Warm & Wonderful Knitwear, began with a market stall in London’s Covent Garden but shot to fame in the early ’80s when Lady Diana Spencer began wearing one of their sheep jumpers to her fiancé Prince Charles’ polo matches. David Bowie, Andy Warhol, and a string of other icons of the era were also early Warm & Wonderful customers. The pattern has been copied from time to time, but Osborne and Muir have not produced the original until this collaboration. This one is a true collaboration and comes with a “Warm & Wonderful for Rowing Blazers” label.

Another iconic Diana knit is a soft pink and white sweater with the cryptic phrase “I’m a luxury” blocked out across the front. The original was produced in several colorways during the 1980s by British designer George Hostler and his compatriot Gyles Brandreth, a writer, broadcaster, and sometimes member of the British Parliament. Princess Diana and Elton John were among the duo’s devotees. “Both of these sweater designs have been copied or referenced by others over the years (sometimes without crediting or acknowledging the original designers),” says Rowing Blazers creative director Jack Carlson. “But collaborating with the original designers is exactly what makes this so special to me. I can just picture Joanna and Sally in their twenties, selling their jumpers to Sloane Rangers, pop stars, and royalty. When I was little, in the early ’90s, my family lived in Hampstead in north London, and my mother had one of the original sheep sweaters. It looks as great now as it did then.” You can find the new sweaters on Rowing Blazer’s website. 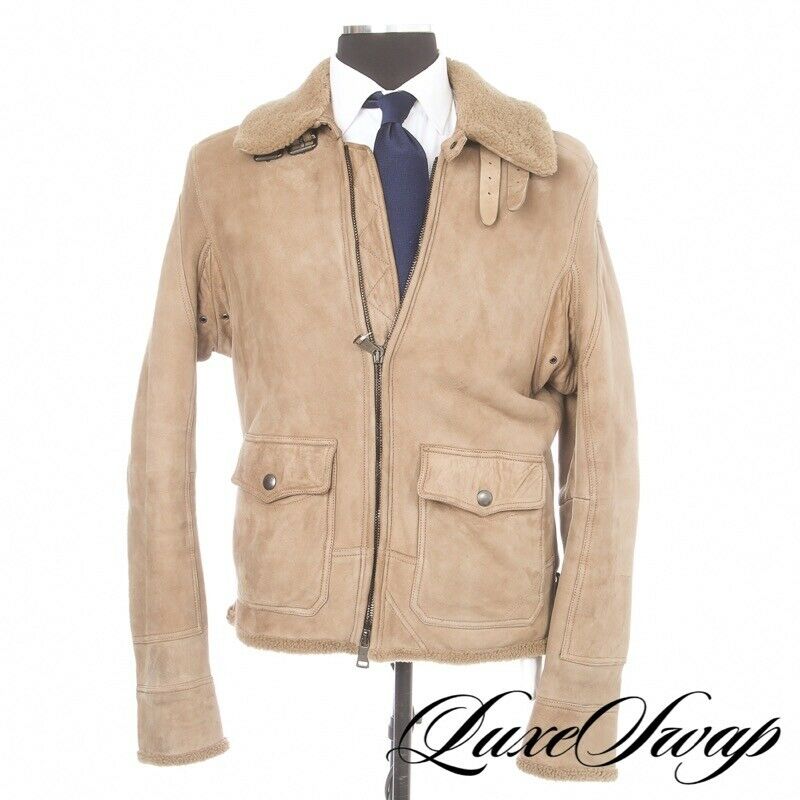 Last month, LuxeSwap received countless shipments from No Man Walks Alone’s customers. For those unfamiliar, the two companies have a partnership: people can send clothes to LuxeSwap for eBay consignment, and the resulting profits are then converted into store credit at No Man Walks Alone. If they’re willing to receive payment in the form of store credit, they’ll get a bit extra in terms of payment than they would have otherwise if they took cash. The result is more spending power at one of the most beloved online menswear shops. You can read more about the “trade up” program in this old post.