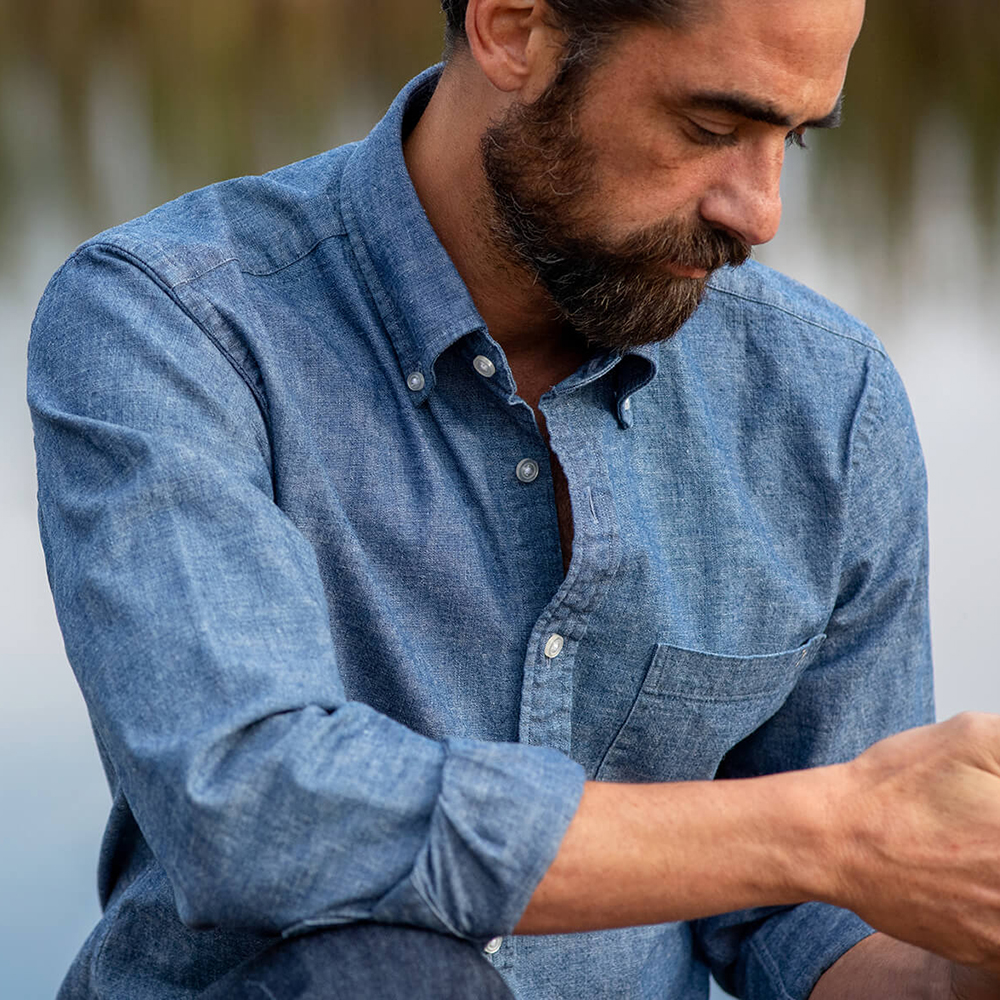 We wouldn’t be able to do what we do without the support of our sponsors. So twice a month, we like to give them a special shoutout. It allows us to recognize them for their support and update our readers on our sponsors’ latest happenings.

This Thursday, Proper Cloth is bringing back their special run of washed denim shirts. Traditionally, washed denim button-ups are only available in ready-to-wear. Custom tailors typically can’t offer them because the finishing process requires big-batch runs, which isn’t possible when you’re making one-offs. But Proper Cloth bridges the gap between ready-made and custom tailoring by gathering a bunch of orders for made-to-measure shirts, then organizing an enzyme wash for everyone.

The result is a custom-fit, tailor-made shirt — produced to your measurements — but with the puckered seams, soft feel, and slightly faded color that makes washed denim pair so well with jeans, field jackets, and even sport coats. A washed denim shirt is a natural accompaniment to tweed — a combo Ralph Lauren himself has always championed. The catch? Since Proper Cloth has to organize these as batch orders, they can only offer the shirts for a limited time. The order window opens this Thursday and you can follow it on their site. 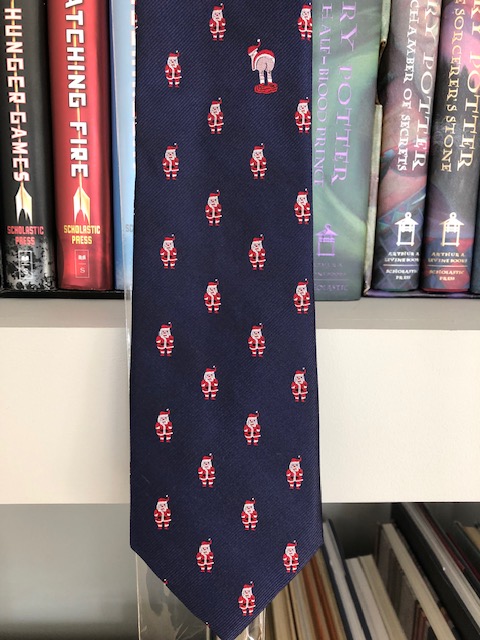 When Paul Winston joined his family’s tailoring business in 1961, the company already had patchwork tweed jackets, go-to-hell pants, and 30 corduroy colors available for custom orders. Paul likes to say that his family has always served a more conservative dresser — which is true, to a degree. They dressed men such as President JFK, Bobby Kennedy, and Peter Lawford in your basic three-roll-two sport coats. But they also had Andy Warhol in their tailoring shop and were known for the occasional out-there item. Thomas Watson, Jr, who served as IBM’s second president during the heydays of Ivy, got all his conservative Winston suits made with wild linings.

Chipp Neckwear is also known for its tongue-in-cheek neckties — and there’s no better time to wear a novelty tie than during the holidays. “While there are those who find some of my ‘sophisticated humor’ ties offensive, I have never seen anything but smiles in response to Mooning Santa,” Paul says. The tie is cheeky … literally. At just $49 for a tie made in New York City, it’s honestly priced for a bit of added holiday cheer. You can wear it with a sport coat in tweed, corduroy, or hopsack. 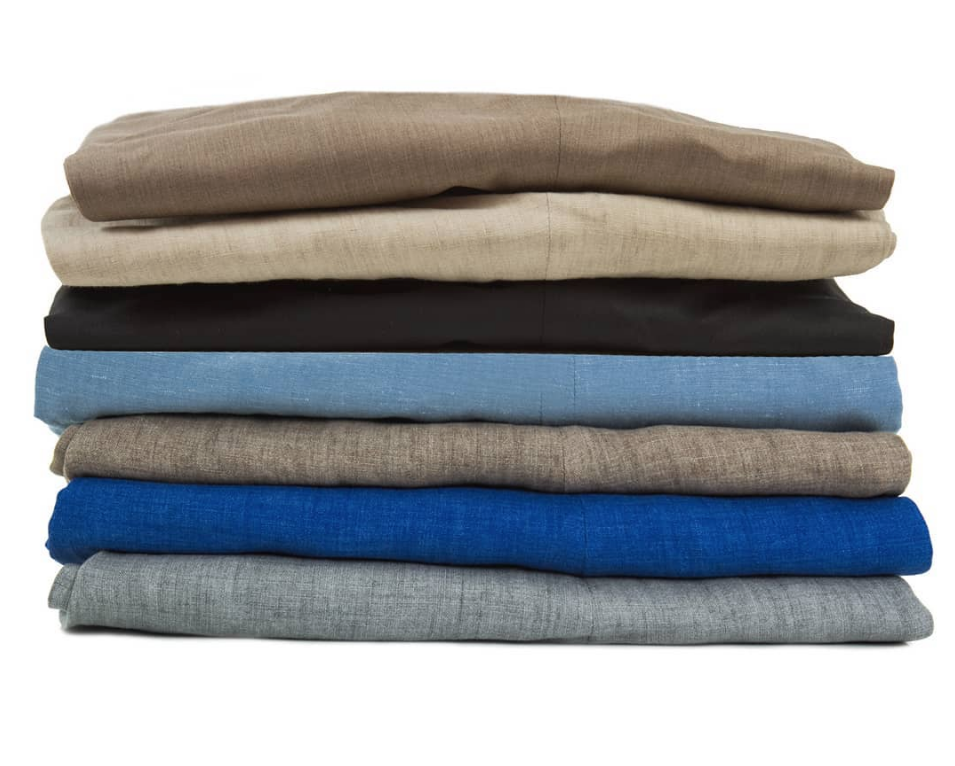 Dapper Classics is holding a two-day trouser sale this week, where you can knock 25% off any trouser order with the checkout code PANTS25. In the last few years, their trousers have become one of their most popular offerings. Made in New York City by the famous Hertling trouser factory, these give you top-end quality for a fraction of what Italian makers charge nowadays for ready-to-wear pants. These come with a rear-split waistband for comfort, flat front, and hook-tab closure. They’re a mid-rise with a slim, but not skinny, fit. They’re also tailored from materials such as Minnis Fresco, an open-weave, tropical wool that’s typically only available to bespoke customers. With the promo code, these come down to about $108 for cotton chinos and $176 for wool trousers. 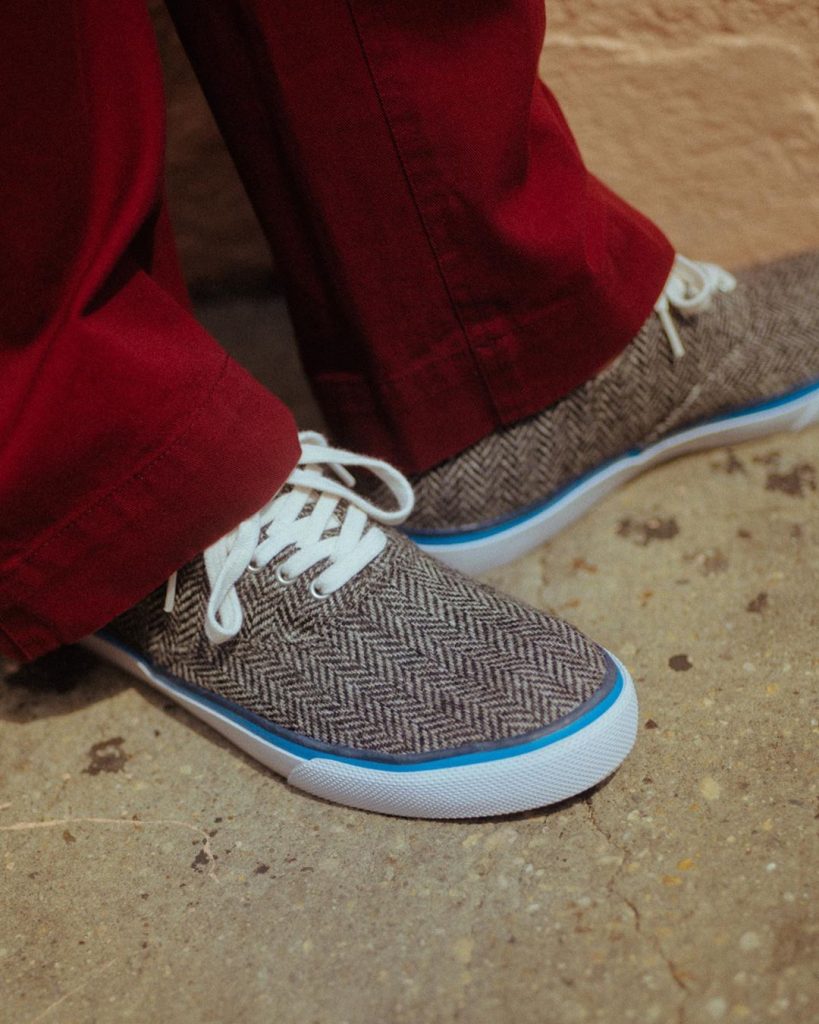 Rowing Blazers just released their collaboration with Sperry Cloud, which is the premium end of Sperry’s label. “I’ve always loved clothing and especially shoes that are somehow simultaneously traditional and unconventional. Sperry’s meets that definition, but I think we’ve taken it a step further with this collaboration,” says Jack Carlson. “We’re using traditional fabrics like herringbone tweed and gun check — but in an unexpected place (shoes), and with brightly colored foxing on every pair. My favorite pair is the mismatched rugby stripe pair. The colors are subtle and collegiate, but the idea that this pair might be conservative is turned on its head by the fact that the two shoes literally don’t match.” 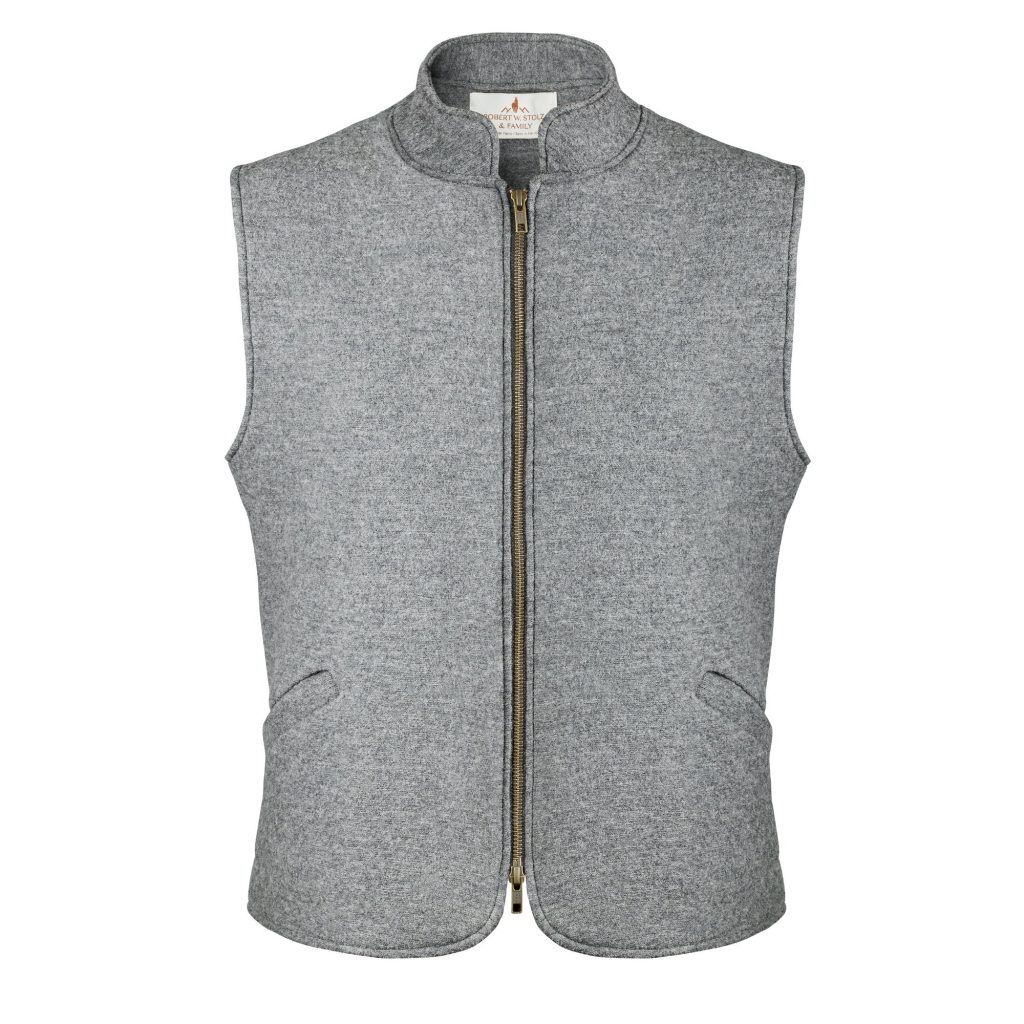 As one writer put it in a 1956 article of Sports Illustrated, “Loden is to the Bavarian what tweed is to the Scot – a fabric so long indigenous to its land, of such peasant origins that it has become almost a folk cloth.” Indeed, Bavarian peasants originally designed the cloth sometime in the 11th century so that they could be protected from blustery winters. In the mid-20th century, however, its heritage made it popular throughout metropolitan cities in Western Europe and the United States, with men and women rushing to wrap themselves in the fabric’s soft folds. In the 1980s, The New York Times wrote of it: “the coats were really a kind of caste mark, roughly definable as European preppy, that seemed to go automatically with cuff buttons left open on a bespoke sport coat, or a promising job at the Morgan Guaranty branch on the Place Vendrome.” The fabric became so popular at one point that manufacturers in France and Italy started coloring their regular wool coats “Loden green,” but of course, these didn’t keep out the rain and cold in the same way.

Robert Stolz is one of the few companies today still offering Loden coats, a style he fell in love with when he moved to Austria with his wife. The company only makes things the traditional way — using real Loden cloth and by manufacturing in Europe and the United States. The USA collection features pure, premium boiled wool that’s been imported from Austria. The material is knitted and then felted, which makes it more casual and forgiving than its woven counterparts. “The performance attributed to merino wool is widely hailed, but boiled wool is even better,” says company founder Robert Stolz. “It’s thicker and longer-lasting, warm but breathable, and the colors are all in rich, melange colors. They stretch for natural comfort, but they’re silent, unlike synthetic fabrics that rub noisily. They’re also not bulky like puffer jackets.”

Each custom jacket can be cut and sewn to any size (just email Robert for length adjustments). They can also be made in seven days, which means they’re available for holiday delivery if you order soon. Modern styles include the “office vest,” hoodie, and unlined jacket, which are available in six colors. “The vest is my interpretation of the Patagonia Fleece Vest,” says Robert. “I imagine for someone who works in an office where that’s the uniform this would be a major upgrade.” 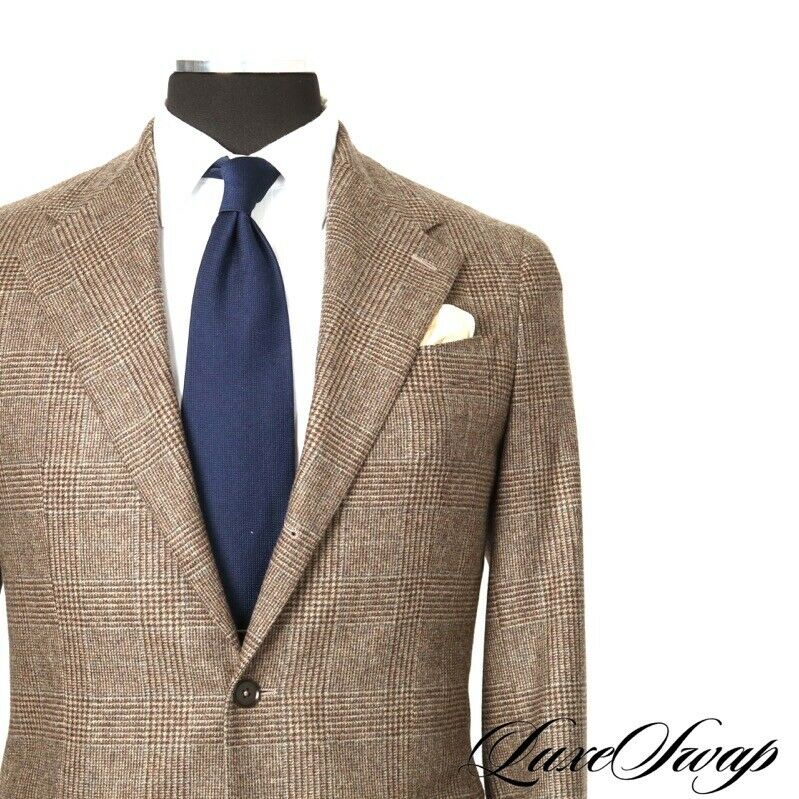 As a consignment business, being located in New York has its perks. LuxeSwap often gets called in to do in-house closet cleans and being on the Gold Coast means there’s no shortage of ultra-wealthy clients who have never cleaned a closet before. Recently, the company got called to do a closet cleanout for a multi-millionaire who has a taste for classic clothing. “We’re auctioning off over 400 pieces, many of which have a sportsmanlike quality,” says company co-founder Matthew Ruiz. “There are some cashmere outerwear pieces from Loro Piana, vintage sterling silver shotgun shaped cufflinks from Purdey, 14K gold tuxedo stud sets from Tiffany, alligator belts from Paul Stuart, Loro Piana baby cashmere knits, and much more.”

LuxeSwap will also be holding a big auction soon for Hertling trousers. The company recently drove down to Hertling’s Brooklyn factory and picked up a few hundred pairs of pants. “It’s going to take a few weeks to get them sorted and photographed, but we’ll be doing another flash sale like last time around the New Year,” says Matthew. “We’re going to try to keep everything under $100.”