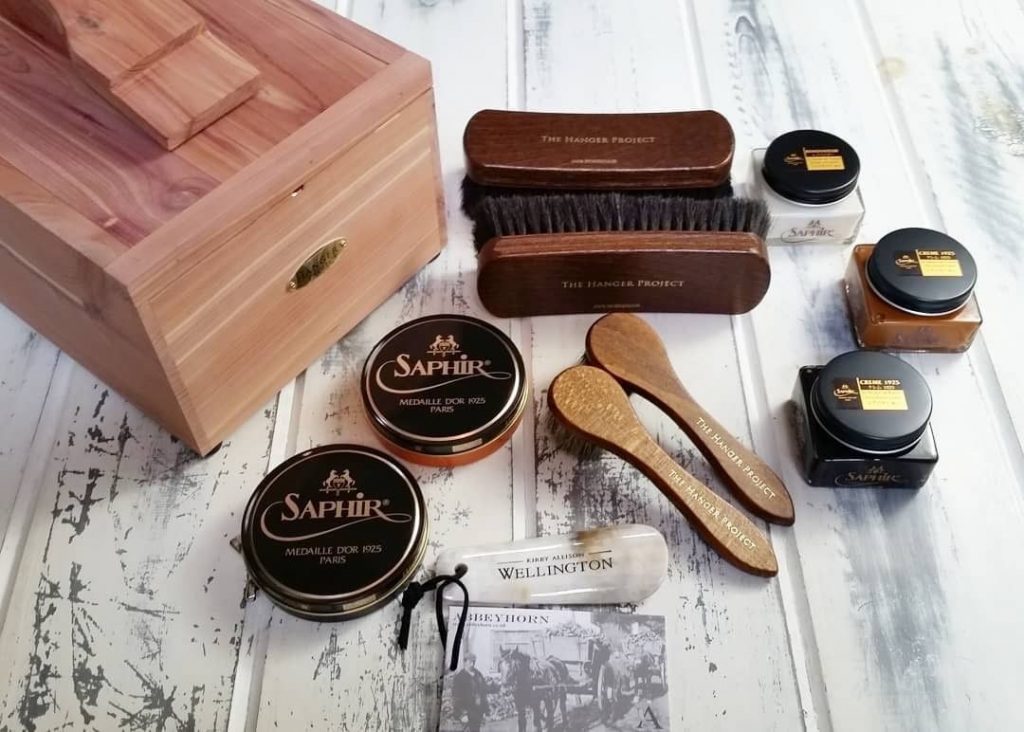 Put This On is made possible thanks to our sponsors, so twice a month, we like to give them a special shoutout. Doing so allows us to thank them for their support, as well as update readers on our sponsors’ latest happenings.

The Hanger Project has been busy building one of the biggest YouTube channels on classic men’s clothing. It covers everything from the basics of garment care to interviews with people in the bespoke tailoring and shoemaking trade. Kirby tells us that some of his favorite recent videos include his factory tours of Gaziano & Girling, one of the best West End shoemaking firms, and JR Rendenbach, one of the few European tanneries that specializes in the old tradition of oak-bark tanning (a method that yields a particularly hardwearing leather, which is why JR Rendenbach’s hides are often used for shoe soles). Kirby also has videos on how bespoke shoe lasts are made, tips for how to be better dressed, and a rundown of Allen Edmonds’ best selling model, their Park Avenues. 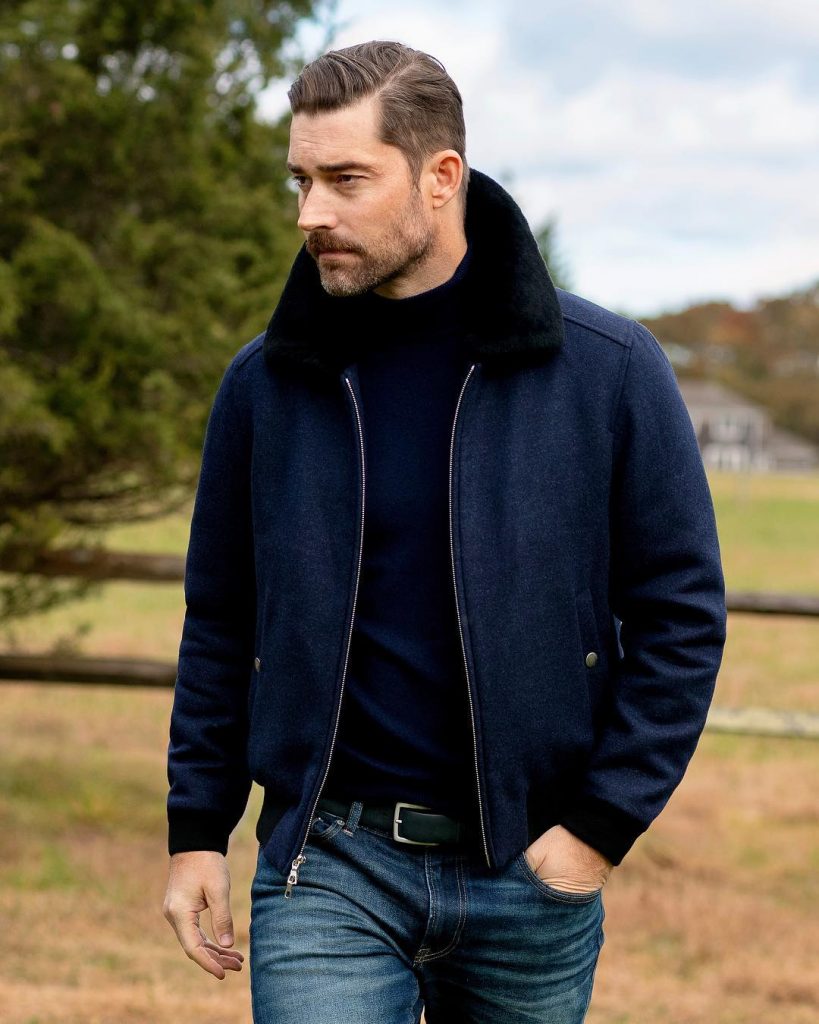 The space for online made-to-measure shirt tailoring has really grown in the last ten years. Whereas online MTM companies used to be somewhat suspect, often known for their choppy and unreliable results, there are so many more players now on the market — ones that have smoothed out the production process and are giving customers better shirts. Proper Cloth has emerged as one of the more popular brands. They allow you to get a custom-made shirt by submitting measurements of your body or your best-fitting shirt, and they’ll guarantee the perfect fit on your first order (or they’ll do a free remake). Notably, unlike most other custom shirtmakers, Proper Cloth has casual fabrics such as printed indigos, washed chambrays, and brushed flannels, giving you options for the weekend.

This past year, they’ve also gone beyond their shirt service and included some online MTO tailoring (suits and sport coats, available in almost any size), as well as casual knitwear and outerwear. The navy bomber you see above, for example, is made from a Vitale Barberis Canonico wool and pressed shearling collar. Like much of Proper Cloth’s outerwear selection, this jacket is designed so you can wear it with a dress shirt and tailored trousers, or more casually with a textured knit and some jeans.

Long time readers know we love grenadine ties. Grenadine is a type of Italian silk that comes in a variety of weaves, but generally takes on a honeycomb-like texture. In solid colors, such as what you see above, they’re great in that they’ll go with almost anything. When paired against solid-colored suits and sport coats, their texture lends visual interest. At the same time, they’re simple enough to combine with patterned shirts and jackets without having anything clash. If you’re getting your first one, stick to navy or black — those are the most useful colors.

You can get a grenadine from any number of reputable brands, but none will be as affordable as Chipp’s. Chipp is the online accessories arm of Winston Tailor’s, which was founded on the 1940s by a former J. Press employee named Sidney Winston. The original Winston was famous for making patchwork madras and tweed sport coats, as well as dressing luminaries such as President JFK, Andy Warhol, and Joe DiMaggio (the family company is now run by Sidney’s son, Paul). Chipp’s grenadines are made in New York City using the same Italian silks you’ll find at other top-end shops, except their grenadines only cost $60. They also come in almost every color imaginable. 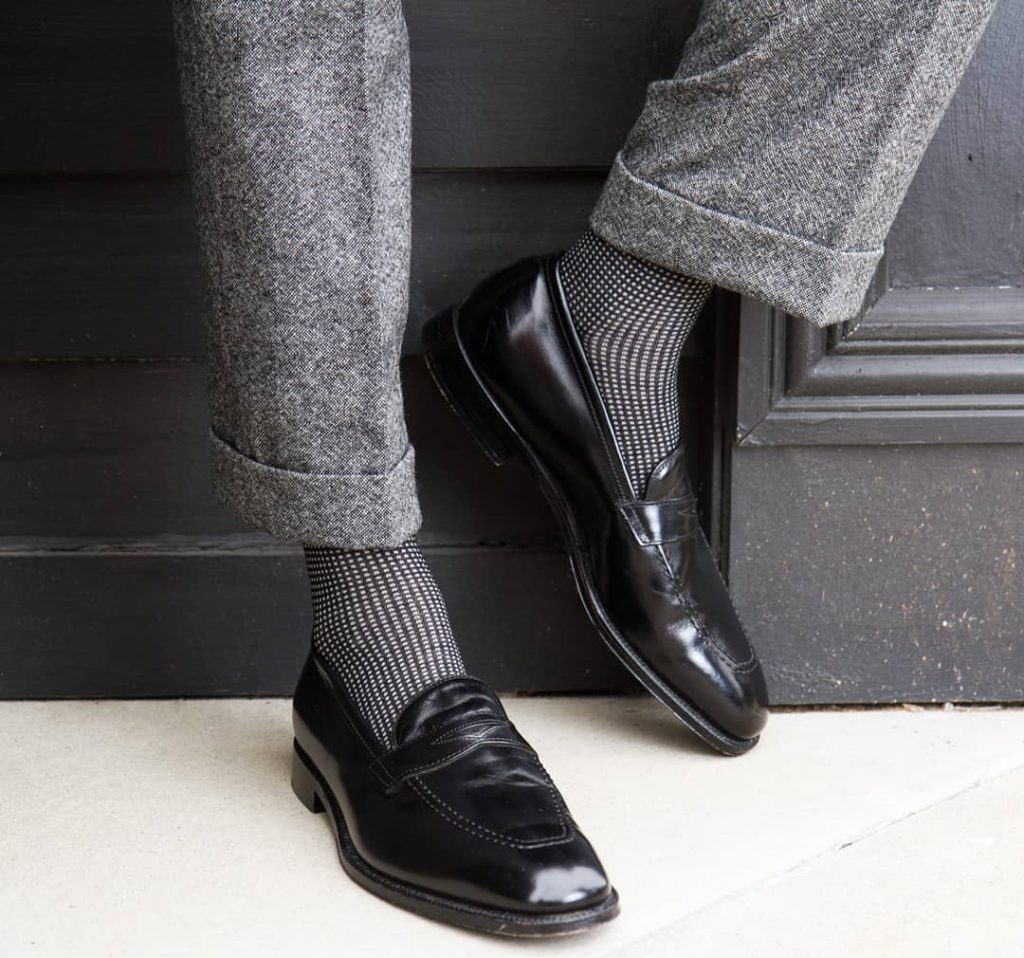 There are two general guidelines for wearing dress socks. The first is that solid-colored navy socks will go with almost anything. The second is that, if you chose a color other than solid-navy, it’s good to go with a color that approximately matches your trousers. This way, you both visually extend your leg line, as well as make your socks discrete enough that they don’t draw the eye downwards.

Those are good rules of thumb, but if you want to add some variety to your sock wardrobe, you can also go with conservatively patterned socks. Something like these black-and-ash socks from Dapper Classics — which they call their grenadine pattern — can be worn with grey trousers and black shoes for a monochromatic look. They lend a bit more personality to an outfit than solid-colored socks, but are still conservative enough for the office. Note, until the end of today, you can knock 20% off your order with the checkout code END18 (hint: this discount code was sent out through their email list, so if you sign up, you can get notices of future promotions). 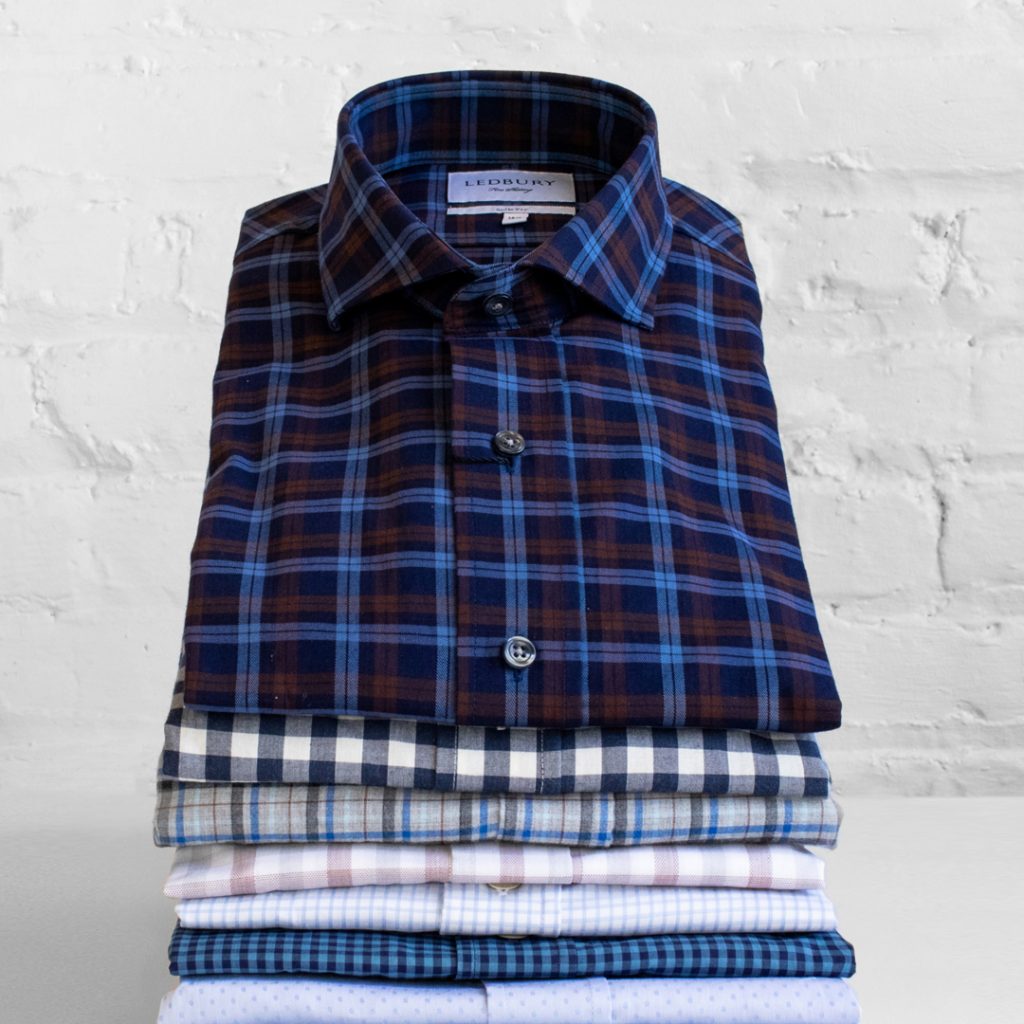 Ledbury is having their winter sale right now, where you can find select items discounted as much as 50% off. Included are the sort of button-ups the company has built their reputation on. Ledbury’s shirts come in both slim and classic fits, are made in from fine European fabrics, and often feature designs that work for both semi-casual work places and the weekend. Their light blue checks and chambrays, for example, can be used to dress down tweed sport coats and blue blazers, while the plaid flannels can be worn with chinos or jeans, as well as casual outerwear options such as field jackets.

Their sale section also includes a selection of patchwork-styled scarves, five-pocket chinos, and textured sweaters. Their navy cable knit, for example, can be worn casually with things such as Barbour jackets, duffle coats, topcoats, milsurp jackets, or even certain leathers. Plainer merino crews and v-necks can be great under sport coats — or when you’re just trying to look a bit dressier — but uniquely textured sweaters often feel more casual. They can also add visual interest to what would otherwise be a plainer ensemble. 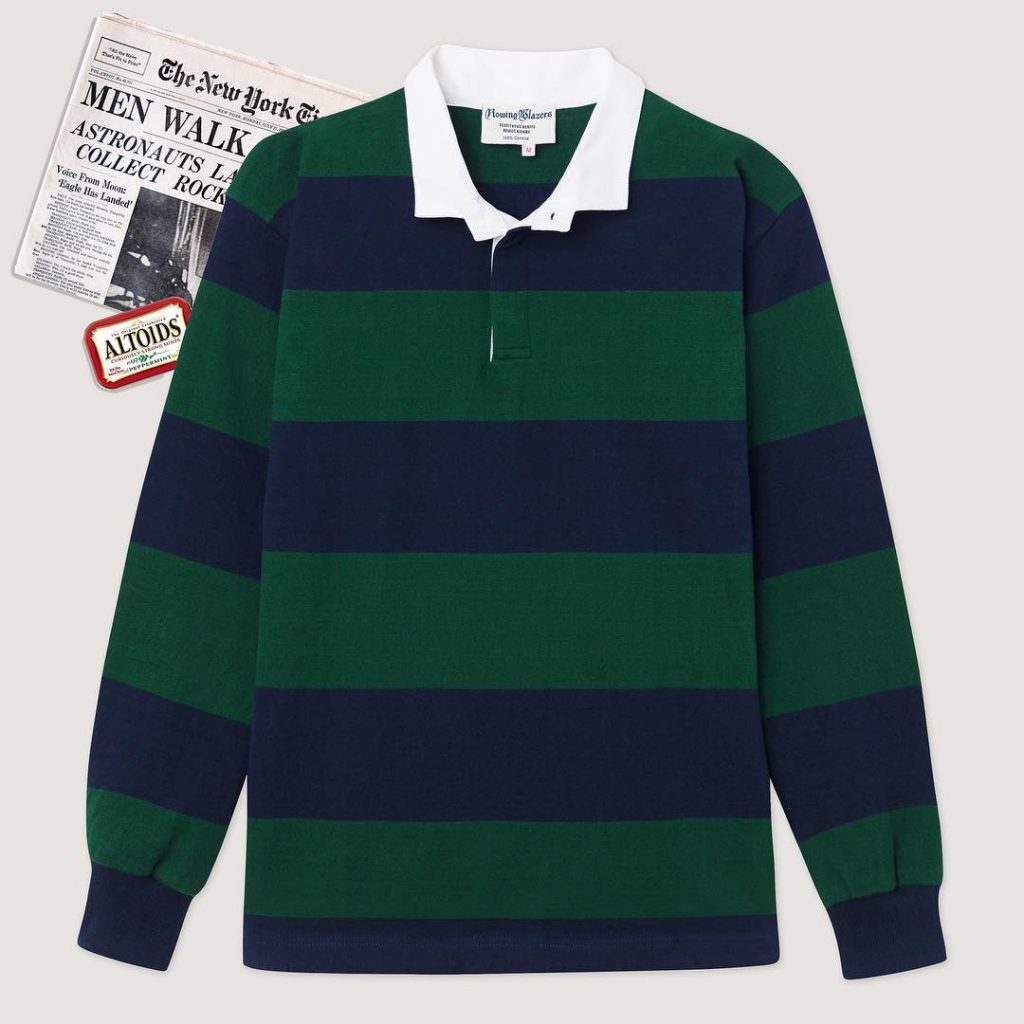 To borrow a line from a famous blog, Rowing Blazers is unabashedly preppy. While people have been wringing their hands for years over the death of prep, the aesthetic looks to be making a bit of a comeback lately. Noah’s prep-inspired collections got some attention earlier this year, and Ralph Lauren’s 50th anniversary made headlines. And notably, our sponsor Rowing Blazers is championing a more carefree and less fussy version of the style. Granted, everyone says their prep is approachable, but Rowing Blazers has modernized the look by incorporating a bit of street style into their aesthetic. They even have collaborations with J. Press (for Shaggy Dogs), Mister Mort (graphic tees), and Noah (blazer striped goods).

Pictured above is just one of their many long-sleeved rugbys. The pullover style has been a cornerstone of men’s wardrobes for decades, from David Hockey’s art studio rugbies to ’70s rock climbing rugbies to even ’90s hip hop culture, influenced in part by RL Polo’s sporty aesthetic. Rowing Blazers has so many of them, they’ve broken their selection up into three sections. The one simply called “Rugby Shirts” is for the sort of heavyweight, 12-gauge cotton classics that you can wear with jeans and chinos. “End of the Day Rugbies” is Rowing Blazers’ fun-shirt version of the rugby look. And finally, they have vintage rugbies for those who want something unique. 15% of those sales will go directly towards Play Rugby USA, a youth rugby program for kids from underserved communities.