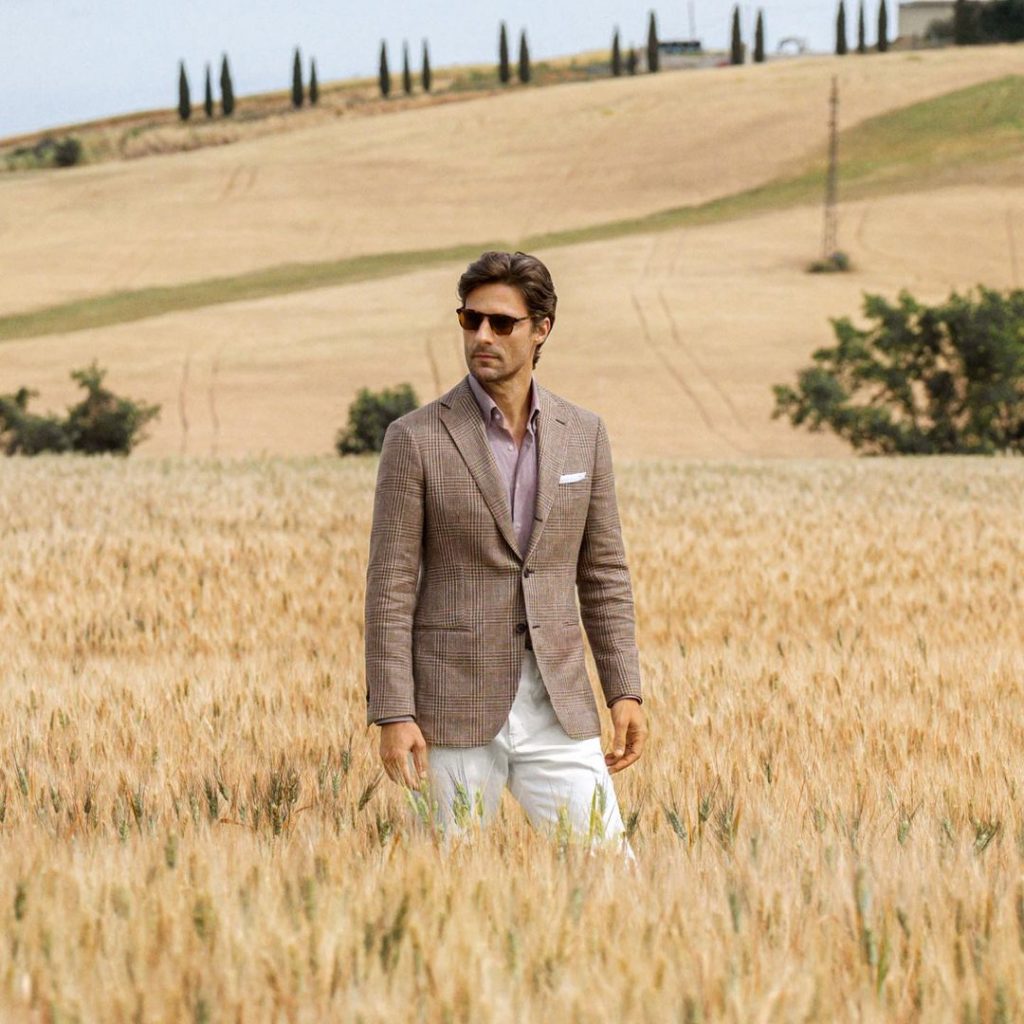 Put This On wouldn’t be possible without sponsors. So, twice a month, we like to give them a special shoutout. Doing so allows us to recognize their support and update readers on our sponsors’ special happenings. Since it’s the Fourth of July weekend, you can expect that means lots and lots of sales.

Proper Cloth is having a huge blowout this weekend, including free shipping on all orders and upwards of 40% off select shirts, jackets, trousers, outerwear, and accessories. The promotion includes some of their most popular items, such as their Italian-made, wool-cashmere Aran sweaters, which add texture to an outfit and keep things from looking too basic (those knits are marked down to $175 from $225). They’ve also discounted their dressier outerwear pieces, such as the wool-linen trucker jackets, smartly tailored shirt jackets, and dressier puffer vests, all designed to work just as well with jeans as they will wool trousers.

A broad array of shirtings are also available, including blue-and-white striped cottons, beige pique knits, and rustic plaids. If you’re struggling to wear a tie, try one of Proper Cloth’s darker shirtings, such as solid navy linen. That can be worn with anything except a navy suit, and its distinct casual nature means you won’t look like you’re missing neckwear. Remember: Proper Cloth is an online made-to-measure clothier, so you can get these made however you want. They also offer free remakes on first-time orders, ensuring you can get the ideal fit. 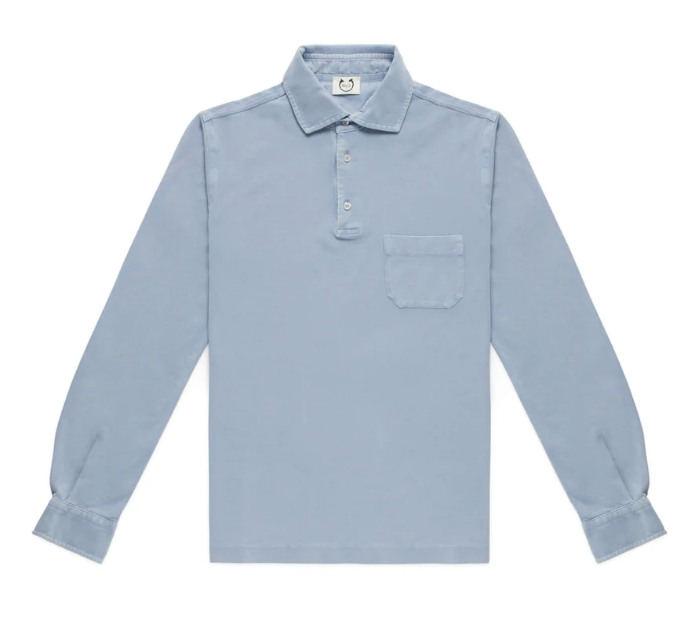 About ten years ago, when I had more time in life, I enjoyed the daily routine of ironing. There was something weirdly satisfying about transforming a wrinkled piece of clothing into its sharp pressed form, and then putting on that garment while it was still slightly warm. But nowadays, between the pressures of work deadlines, chores, and familial obligations, I take any shortcuts I can. If you, like me, don’t always have time for ironing, try wearing knits.

Broadly speaking, there are two types of fabrics: wovens and knits. Wovens include all the materials used for most button-up shirts and pants; knits are the soft, stretchy fabrics used to make sweaters and most polos. Knits tend to be a little more wrinkle-resistant than wovens, and whatever wrinkles they have at the beginning of the day are prone to falling out. These days, if I’m running out of the door and don’t have time to iron a shirt, I reach for jersey t-shirts, knitted polos, or thin sweaters.

Wolf vs. Goat has a bunch on sale at prices starting as low as $17 (yes, $17). Most of their clothes are made in Italy using fine Italian yarns. The garment-dyed polos feature a three-button placket and long-sleeves, in case you want to show a bit of shirt cuff when wearing this under a tailored jacket. They’re available in staple colors such as white and light blue. Additionally, they have long-sleeved tees made in Portugal from cotton-modal yarns. If you’ve never experienced modal, imagine all of the best qualities in other fibers wrapped up into one: soft, silky, moisture-wicking, and breathable. Those will pair well with shorts or jeans on a warm summer day. 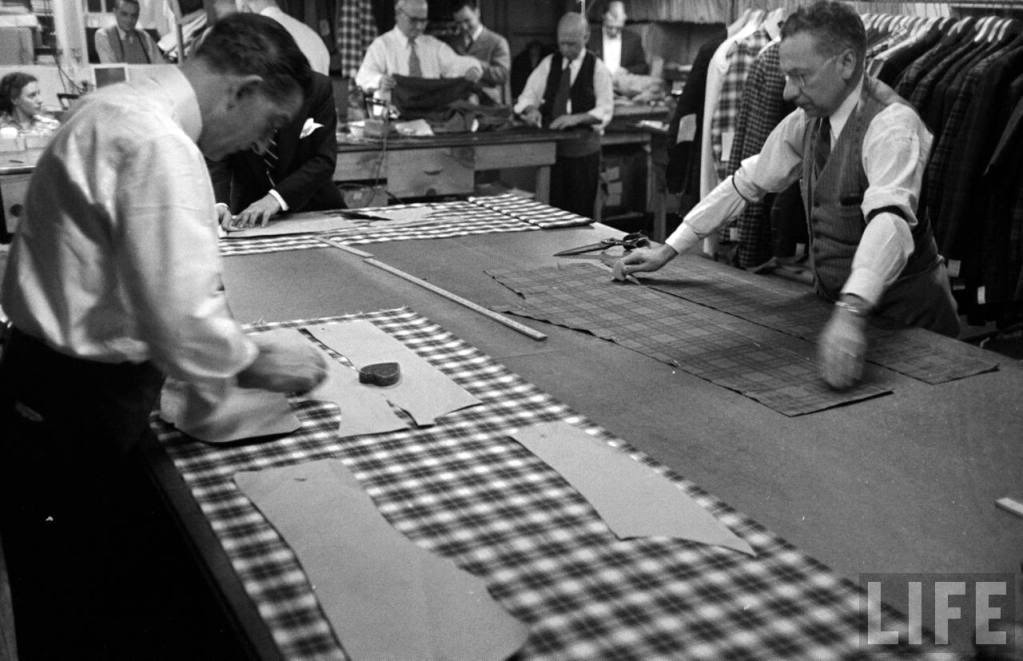 Chipp is an old Ivy-era clothier who’s dressed the likes of JFK and Andy Warhol, and since they’ve been around the New York garment trade forever, they also have access to some of the city’s best tailors. If you’re in NYC, they can make you a custom garment, but for shoppers online, they also have both ready-made and custom-order accessories. Their standard ties, for example, measure 3.25″ x 58″, but they can also shorten, lengthen, widen, or narrow ties for just $10. To place an order, go to their site and order one of the 60″ or 62″ ties. Then in the comment section, specify exactly what you want (say, a 3″ x 60″ tie). Turnaround time for custom orders is two weeks. And like everything Chipp sells, these are fully made in NYC. 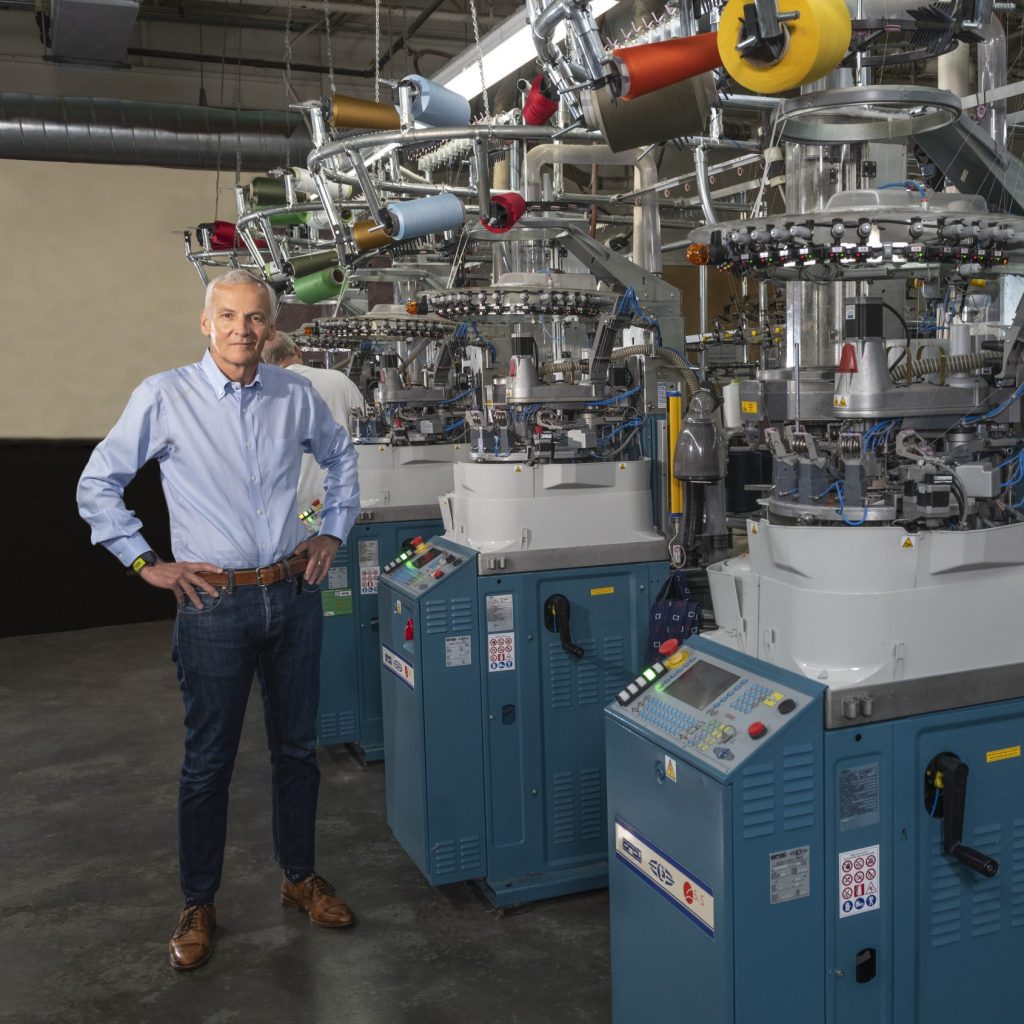 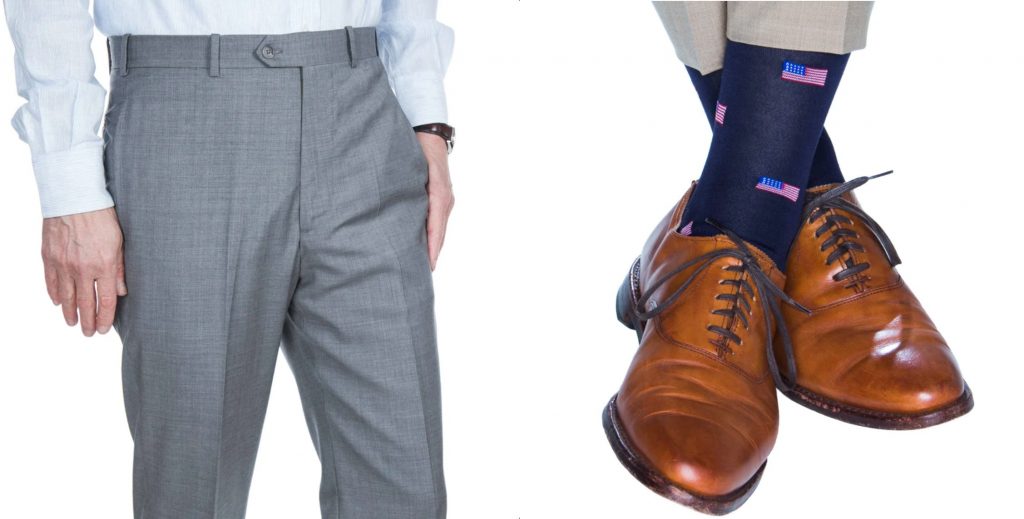 It’s hard to imagine anyone starting a company nowadays selling American-made goods. With the Americana movement a good decade behind us, many companies that defined that era have either moved on, shuttered, or long offshored their production. The internet has made it easier than ever to comparison shop, which has transformed almost everything into a commodity.

Dapper Classics is one of the few companies still holding on to the made-in-USA ethos. Today, they celebrate their tenth anniversary — ten years of producing high-quality items in the United States and selling them at fair prices. With offshoring and the disappearance of the middle of the menswear market, surviving a decade is a remarkable achievement. (Pictured above is the company’s founder and president, Fred, standing at their third-generation, family-owned sock factory in North Carolina.) It’s not often recognized, but buying MiUSA goods isn’t just a matter of patriotism. Dapper Classics’ products compare well to those top-end goods from Europe, but they’re priced more competitively because they don’t have to pay for international shipping and duties.

To celebrate this decennial event, Dapper Classics is offering 20% off all orders over $75 (use the code TEN20) and 25% off orders over $125 (use the code TEN25). You can use this promotion as a chance to stock up on staples, such as navy over-the-calf socks in wool or cotton, or Dapper Classics’ famously well-priced trousers. Since it’s the Fourth of July weekend, this is also a good time to plug their American flag socks. Wear them during Fourth of July celebrations, election nights, and any time you want to show a bit of patriotic pride. 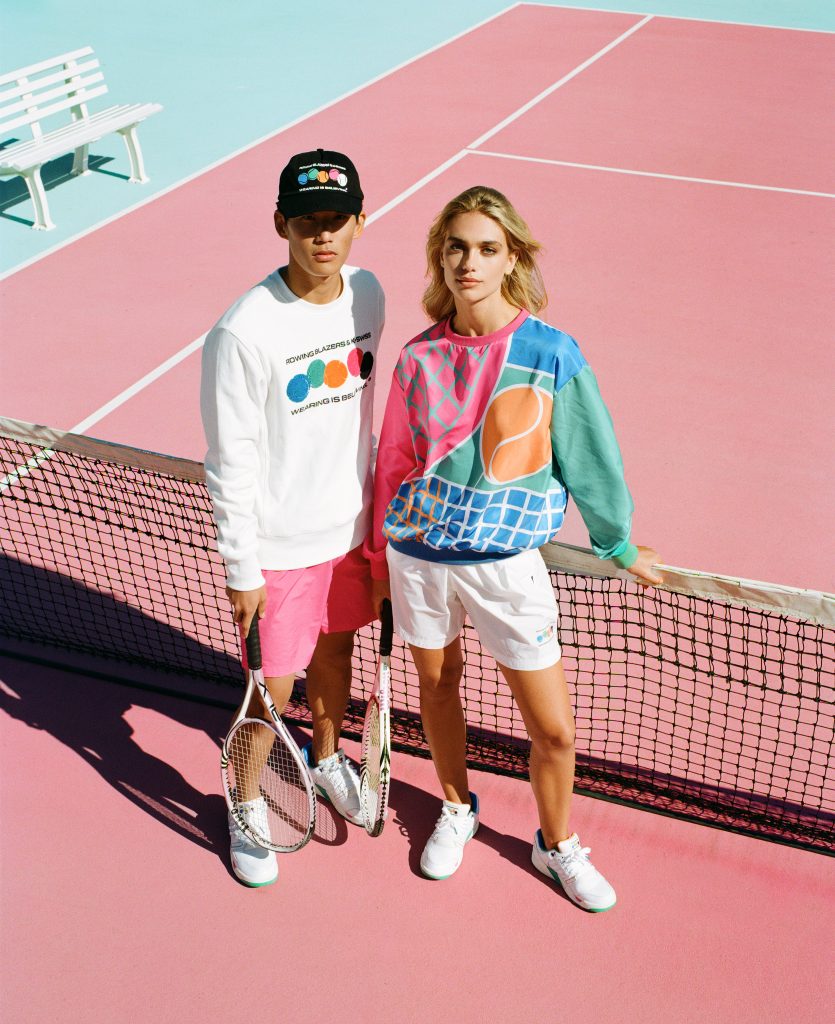 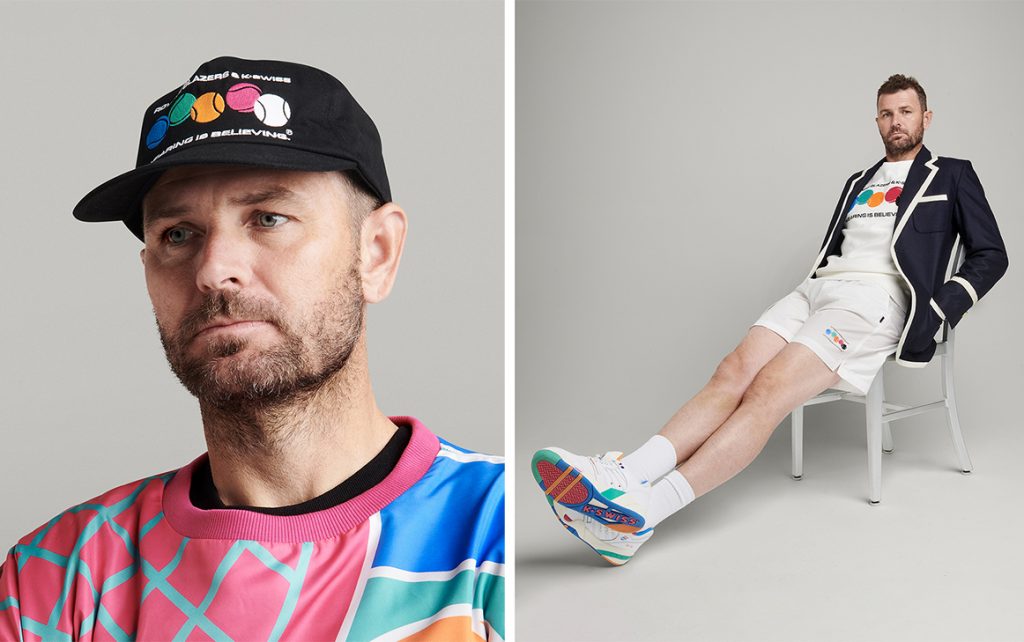 Even if you don’t play tennis, the racket sport’s aesthetics scream summer. The nostalgia-driven brand Rowing Blazers collaborated last week with one of the great names of American tennis, K-Swiss. In addition to unisex ’90s-inspired apparel and accessories, the collection includes a special edition of the iconic K-SWISS SI-18 sneaker. The campaign also features Mardy Fish, the former No.1 men’s tennis player in the United States. A portion of sales from each pair of sneakers will go to the Mardy Fish Children’s Foundation, which provides children, particularly those from underserved communities, with the opportunity to participate in safe and impactful fitness, nutritional, and enrichment programs empowering them to live healthy and productive lives. You can find the new collaboration at Rowing Blazers, K Swiss, and Fred Segal. 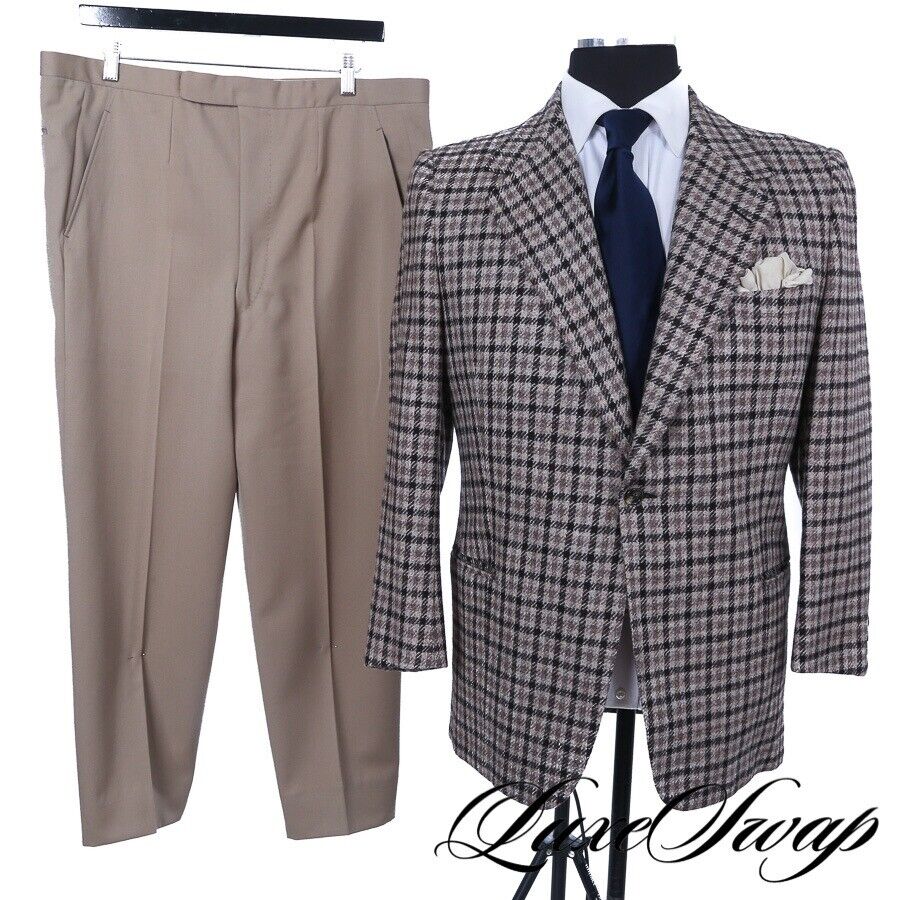 LuxeSwap is helping clear out the estate of Herbert Irving, whose name might be less well known to the general public but was well-regarded in philanthropy circles. Born in Brooklyn in 1917, Irving made his fortune by getting involved in the frozen food business and co-founding one of the largest American companies, Sysco. He then used his money to help others. Throughout his life, he donated over $300 million to medical programs, becoming the single largest benefactor to the Columbia University Medical Center and funding the Herbert Irving Comprehensive Cancer Center. Shortly after he passed away in 2016, his wife made a posthumous $700 million gift to Columbia to advance research and clinical programs for cancer treatment.

Like everyone who reads this site, Irving also enjoyed nice clothes. He used the French bespoke shirtmaker Charvet and was a customer of a little-known NYC bespoke tailor named Marco Weisbard (LuxeSwap founder Matthew Ruiz put it simply to me: “some bonkers cloth on this stuff”). Irving also had tons and tons of fine-gauge knits from John Smedley, a world-class maker for these sorts of sweaters.

LuxeSwap already has a few of Irving’s pieces up on eBay, such as the collection of Weisbard tailoring. They will also be putting up the rest of the collection in the next two weeks (a big drop of about 300 pieces is going up this coming Thursday). As always, everything starts at just $9.99; the ten-day auctions go up on Thursday and end on a Sunday.