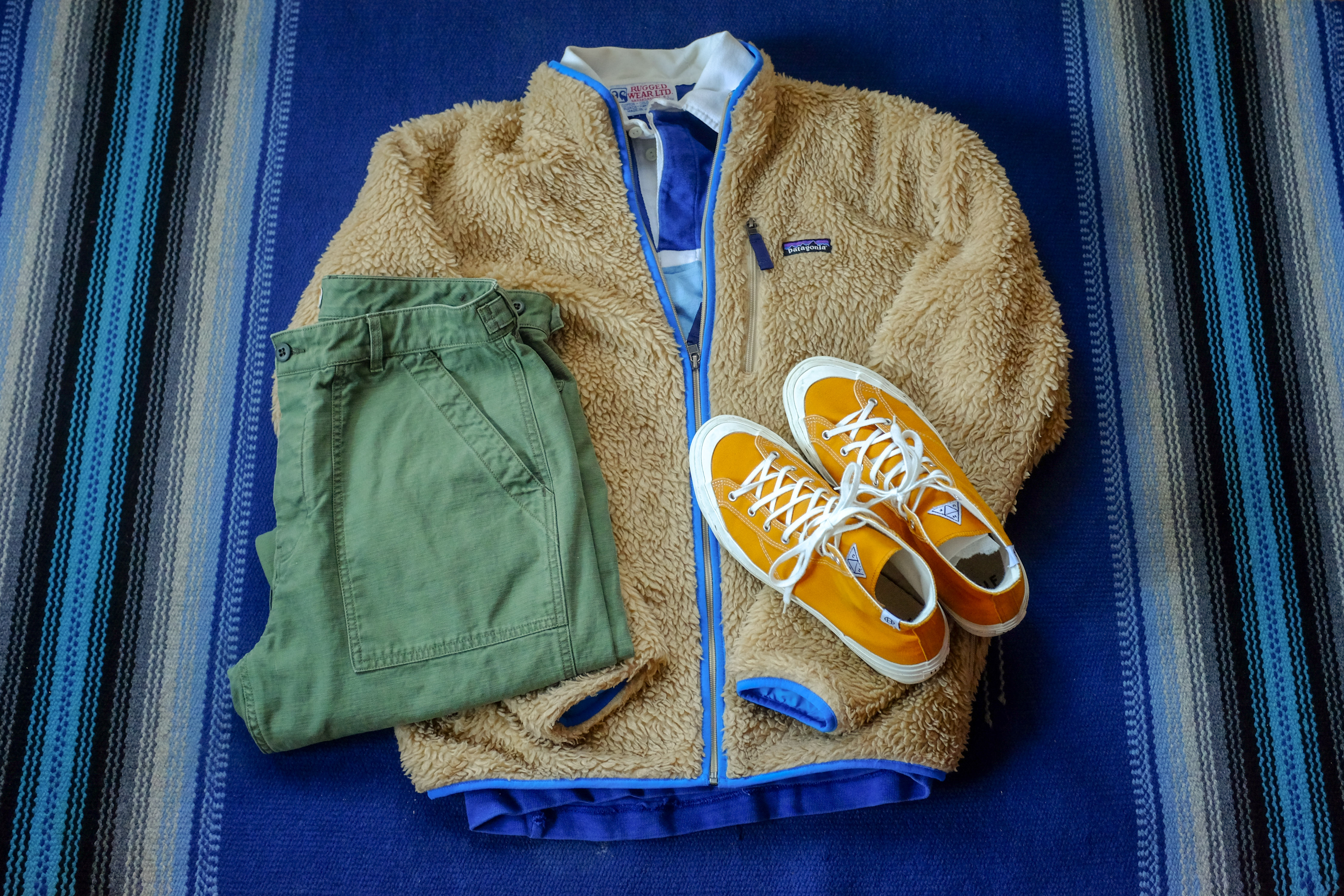 The triumvirate of classic men’s casual pants? Blue jeans, khakis, and fatigue pants. They rule over all others. The renewability and adaptability of these styles keeps them relevant year after year after year, whether “classic style” is the prevailing style for men or not. Since before Cady Heron wore Army pants with flip flops (in 2004 (!)), olive drab, military-derived pants have been cool (with someone, somewhere) for decades.

How people choose to wear fatigues changes, of course. The current taste for them likely has something to do with nostalgia for the 1990s, when baggier shapes were the standard for men and women. Slim shirts for women and shoe-swallowing hems for all. The return has been considered a welcome break from over a decade of close-to-the-body cuts, but for men, at least, looser fatigues have always been there.

There have been piles of olive drab milsurp pants in thrift and vintage stores for as long as I can remember (fewer in real thrift stores in the last decade), designer versions since at least Maharishi in the 1990s, and today you can take your pick from surplus, to mall retail, to high end repro, to more conceptual takes. The models vary a lot: “fatigues” refer most often to the military’s work uniform from the 1950s until the late 1980s. It’s often referred to as OG 107, which refers to the color of the cloth (olive drab cotton sateen). The olive color is most often associated with the Army, but it was the work uniform across the U.S. armed forces. 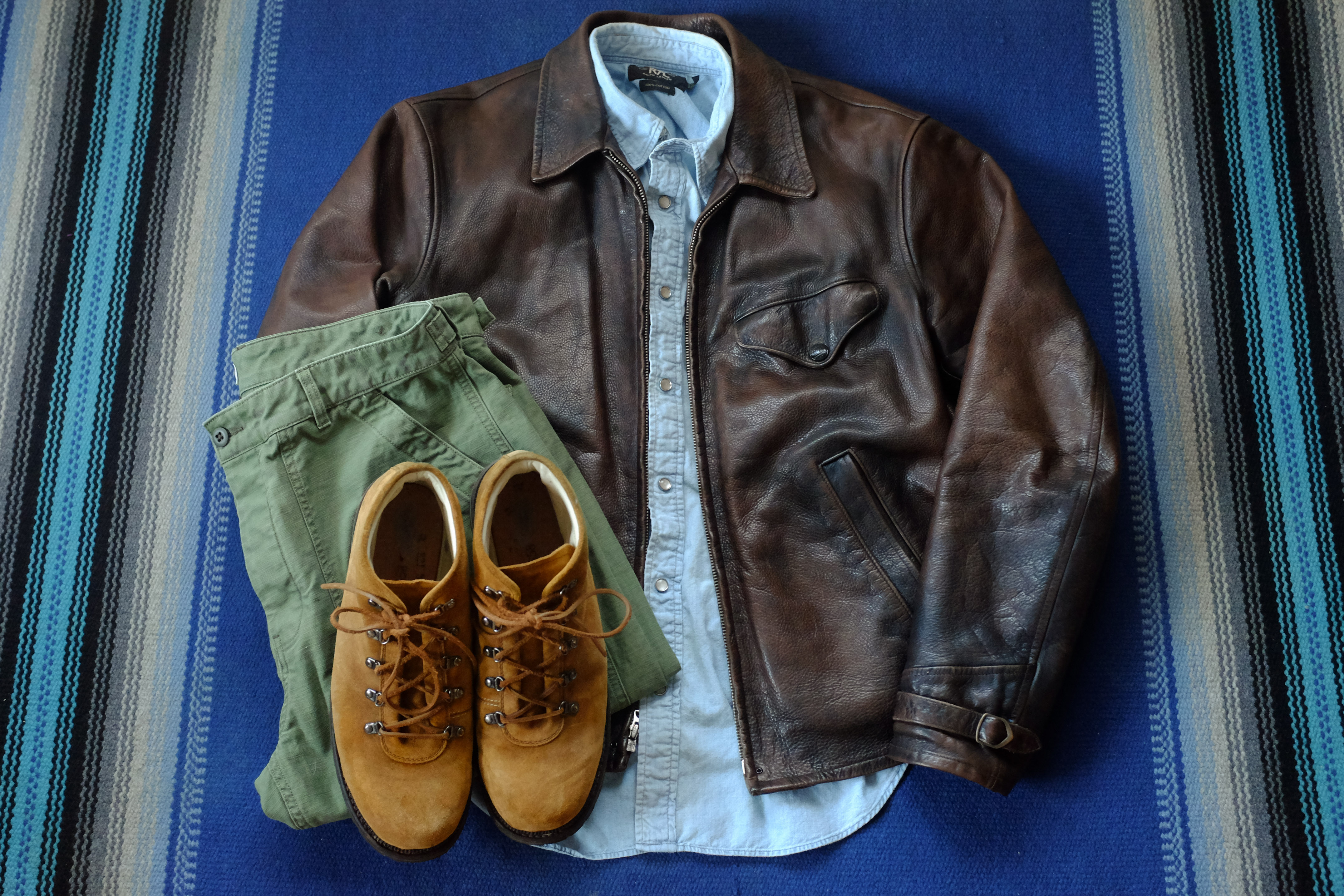 The trouser design is nearly as basic as possible, although some details vary across production lots and contractors: straight (or slightly tapered appearing roughly straight) leg, button closure and fly, belt loops, button adjusters at the sides of the waist, and front and back pockets sewn as patches outside the pants. Also called utility or field pants, these pants do not have cargo pockets, articulating seams at the knees, or drawstring hems, hallmarks of the later tropical combat uniform.

We recommend fatigues all the time as a solid alternative to denim — comfortable, versatile, and without the business casual associations of plain khakis. The way I wear them I owe mostly to the styling of Daiki Suzuki and Engineered Garments, who in the late 2000s showed men that fatigues didn’t have to be sloppy. Nepenthes’ honcho Keizo Shimizu has credited Suzuki with bringing fatigues to the Japanese market in the 1980s at their Tokyo shop, Redwood.

A lot of people considered Engineered Garments’ fatigues to be the current standard; the brand makes a pair nearly every season, although the fabric and silhouette can vary. They’re great. They’re also north of $200 retail, which is beyond a lot of budgets. There are a good number of options out there. 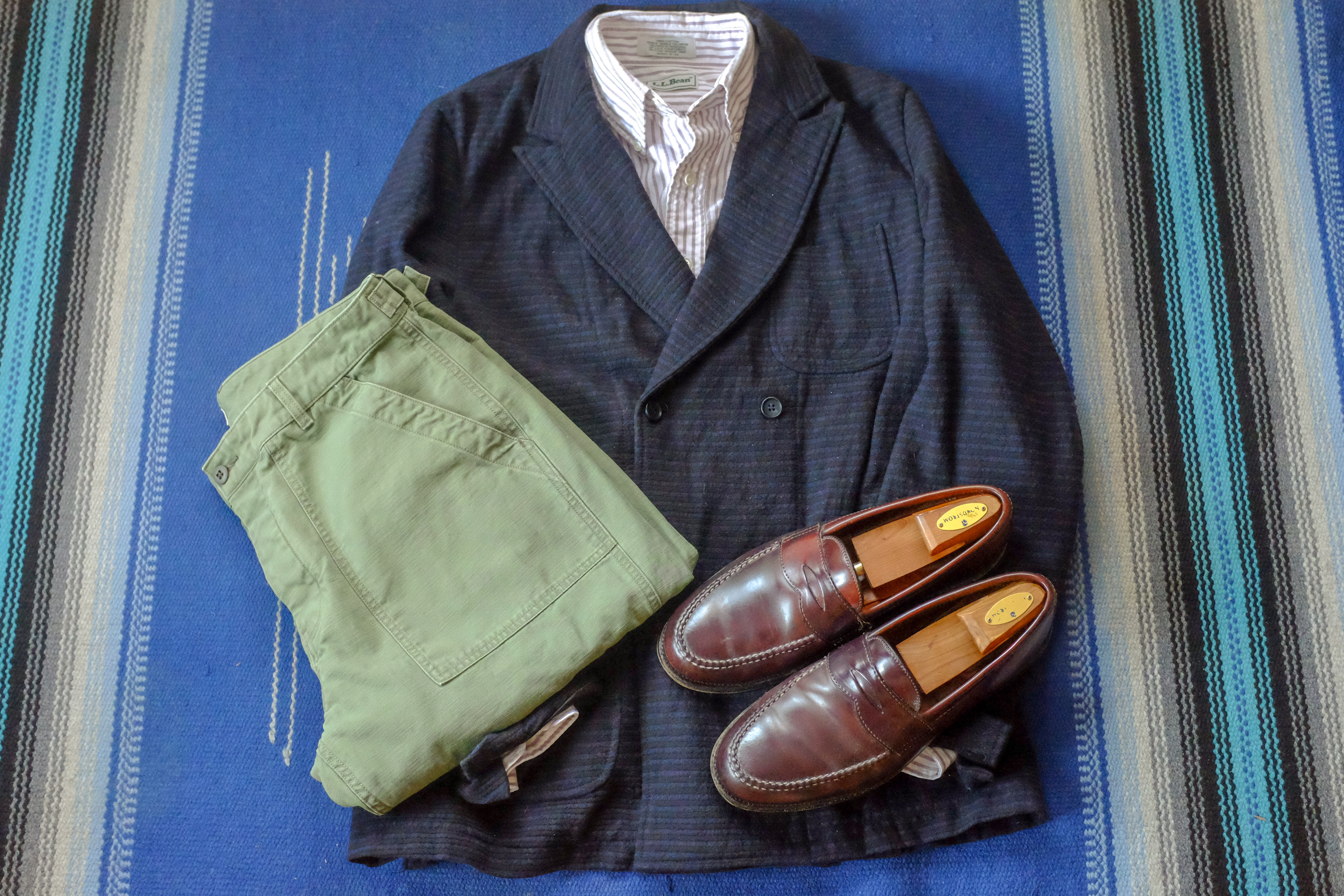 Fortunately, it’s pretty cheap to give fatigues a shot. Vintage fatigues are everywhere. Many surplus stores will have them. They’re plentiful on ebay and Etsy. Some men’s contemporary retail stores have been carrying vintage pairs as well. While design and condition can vary, they’re really easier to buy, in my opinion, than vintage denim, as there’s fewer “special” features to look out for. There’s no redline selvage to look for, no hidden rivets.

There are several different makes — from the 1950s until the 1970s, the pants were made with 100% cotton sateen fabric. Then a more colorfast cotton/poly blend was introduced. It’s not worse, just different. Older models have slightly fancier buttons, with a lip on the edge; newer are flatter. When buying vintage, you just have to keep an eye on measurements — some are sized S/M/L; later models are sized by inches, so 32/34 being 32 waist, 34 inseam. Many if not most of the trousers were also altered by the owners, so measurements on worn trousers may not match the expectations given the size. Consider especially that pants were intended to be worn “bloused” — that is, tucked into boots.

A popular option for new utilities is Earl’s Apparel, the Texas company that makes camp pants under Stan Ray and Gung Ho brands. These trousers have a good rep; they’re basic and well made. Right now they’re a little hard to find in the United States — you’re more likely to see them in the UK under the Stan Ray name or in Japan labeled Gung Ho. I spoke with Jeanne Beard at Earl’s and she said she expects their “camp pants” to be more visible in the near future, although the company does not have a retail operation. In the United States, you can buy their slim fits at Snake Oil Provisions for $75, which is a good value. They also have a fuller, classic fit that’s currently sold out in many locations–Independence still has a couple of pairs.

Topo Designs also makes a slim fatigue pant in this price range; J. Crew’s Wallace and Barnes had a slubby cotton olive drab version this fall (they’re the ones in my photos in this post) that has sold out–you can still find them on eBay. 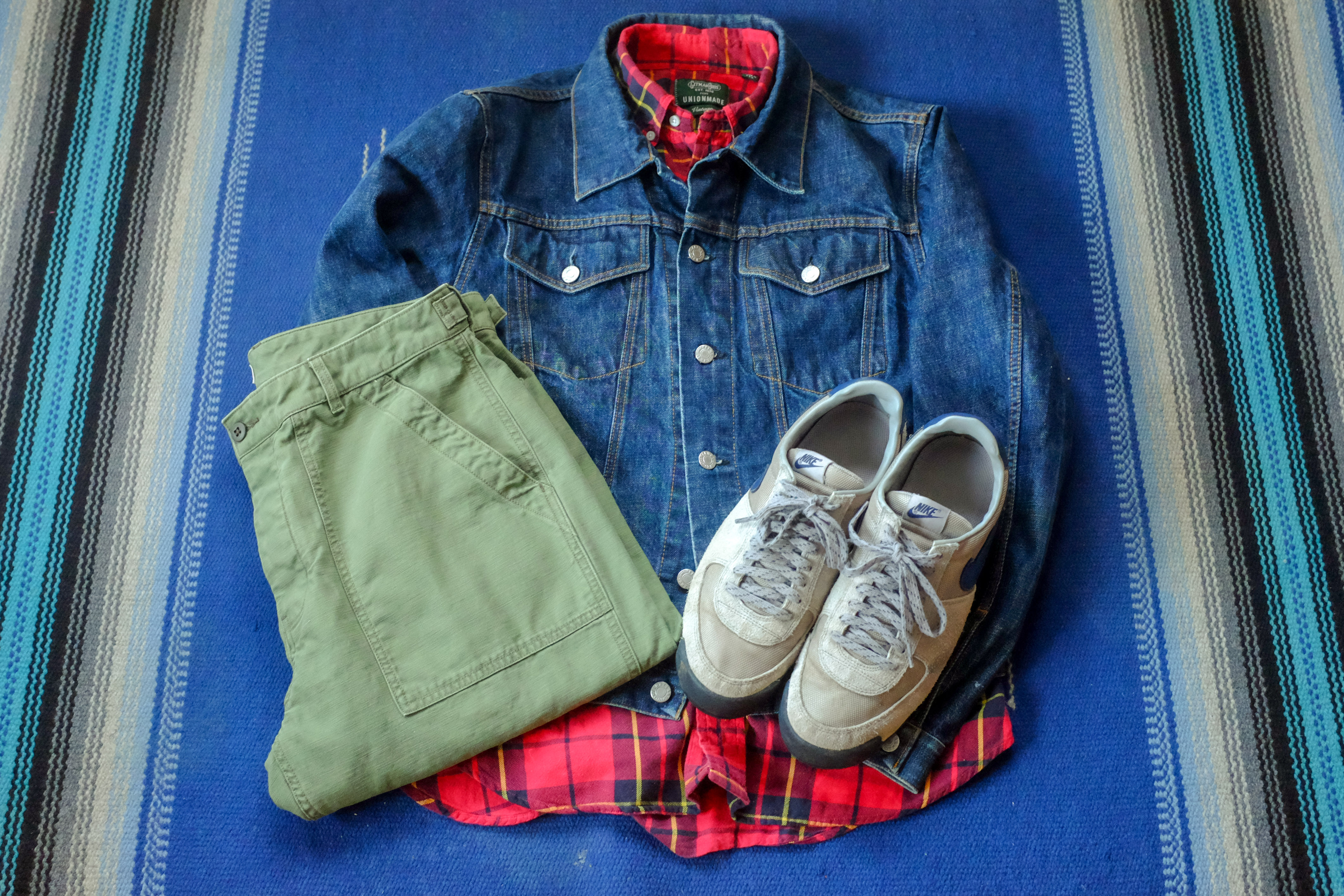 For some reason, my survey of the market didn’t find a lot in this range, which is a comfort zone for a lot of guys — more than basic but not a major commitment. A couple of UK-based brands have slightly upscale versions of the OG 107 pants. Albam has made a herringbone version in a modern, tapered cut, and Universal Works has a smooth-finish twill pair with side adjusters.

At this range, you have essentially two paths: painstaking recreations of original pants, or creative riffs on fatigues. Real McCoy’s has made maybe the ideal reproduction, although availability is sparse and the price is dear. Orslow makes a slubby, sturdy cotton version that looks a lot like military issue, just new and $250. Monitaly has made a pair in their Vancloth fabric for a couple of seasons–baggier and tapered. Engineered Garments generally releases an olive drab version every year–sometimes in rip stop, sometimes in cotton blend, sometimes in their heavy “double cloth” — the cut can vary season to season. Their line of perennials, Workaday, usually has a sateen pair in stock in a full cut. Needles makes a wild baggy tapered style that is pretty daring and only loosely linked to the original design. 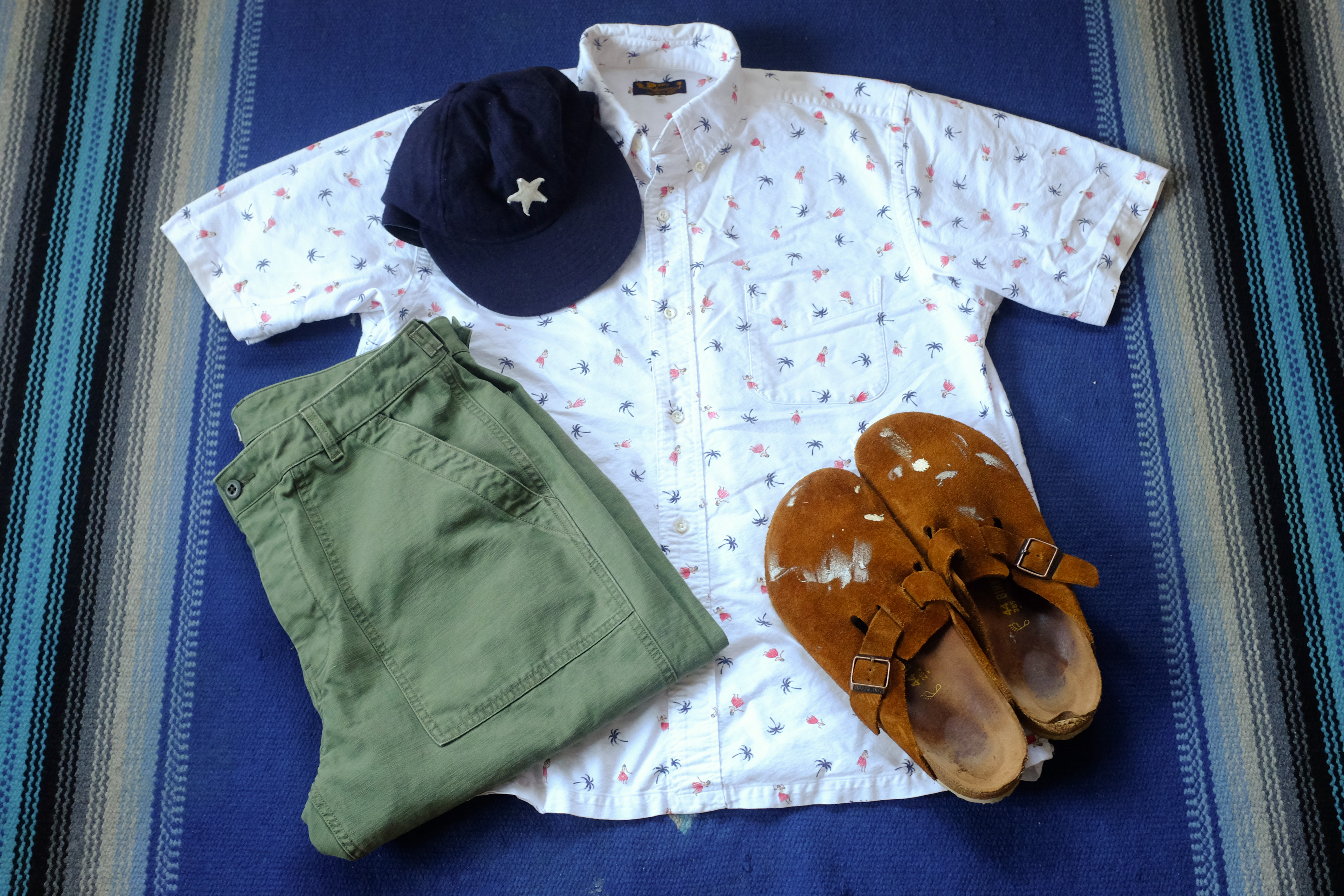