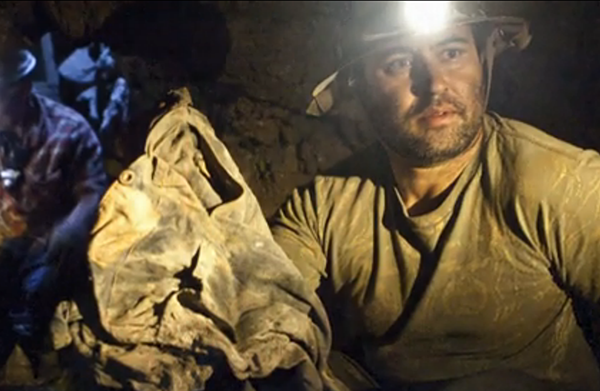 Michael Allen Harris, famed denim expert and author of the book Jeans of the Old West, has a nice story in the The Guardian this week about how he digs around old, abandoned mines, looking for antique denim. The Orange County house painter can make upwards of $30,000 for each pair of jeans he finds, which he sells to Japanese collectors. An excerpt from the story:

The first time I dug up some vintage denim, I had no idea what it was worth. It just looked like some old rags, so instead of carefully uncovering it, I pulled on it and tore it to pieces. I’d actually been digging for antique whisky bottles, and what I didn’t know then was that those “rags” were likely worth thousands.

Out in the desert in California, Nevada and Arizona, there are abandoned silver mines like buried time capsules, virtually untouched, and you can find vintage bottles down there that are worth a lot to collectors. But as I searched for them, I kept coming across these scraps of denim, because jeans, especially Levi’s, were worn by the silver miners in the late 1800s. When a miner got a new pair of work pants, he’d cut up the old ones and use them for lagging around pipes, so there were a lot of antique jeans buried out here.

I did a bit of research into the history of Levi’s, and realized collectors would pay a lot for them, even for scraps. I started going to the mines regularly with my father-in-law, a geologist, to look especially for denim. But the mines have been covered in rocks and trash, so it can take weeks and months to dig down, lifting big rocks one by one. We crawl around wearing hard hats and head lamps. We don’t tunnel underground, just dig through rocks inside the mine opening, but it can be dangerous: we’re crawling around on probably 100 tons of unstable rocks.

I put a few of the denim items I’d dug up on eBay. A Japanese collector contacted me and came all the way out here to look at my collection in person. I sold him a jacket for $1,000. At the time, it seemed a good deal, but he told me not to talk to other people or tell them what I was doing; I realize now that he didn’t want me to find out how much these things were worth. I talked to other dealers and collectors, and found out he was selling the pieces back to Levi’s for its archives – he’d sell them a pair of jeans for upwards of $100,000.

You can read the rest of the story here. CBS also interviewed Harris last year for a story they did on denim.