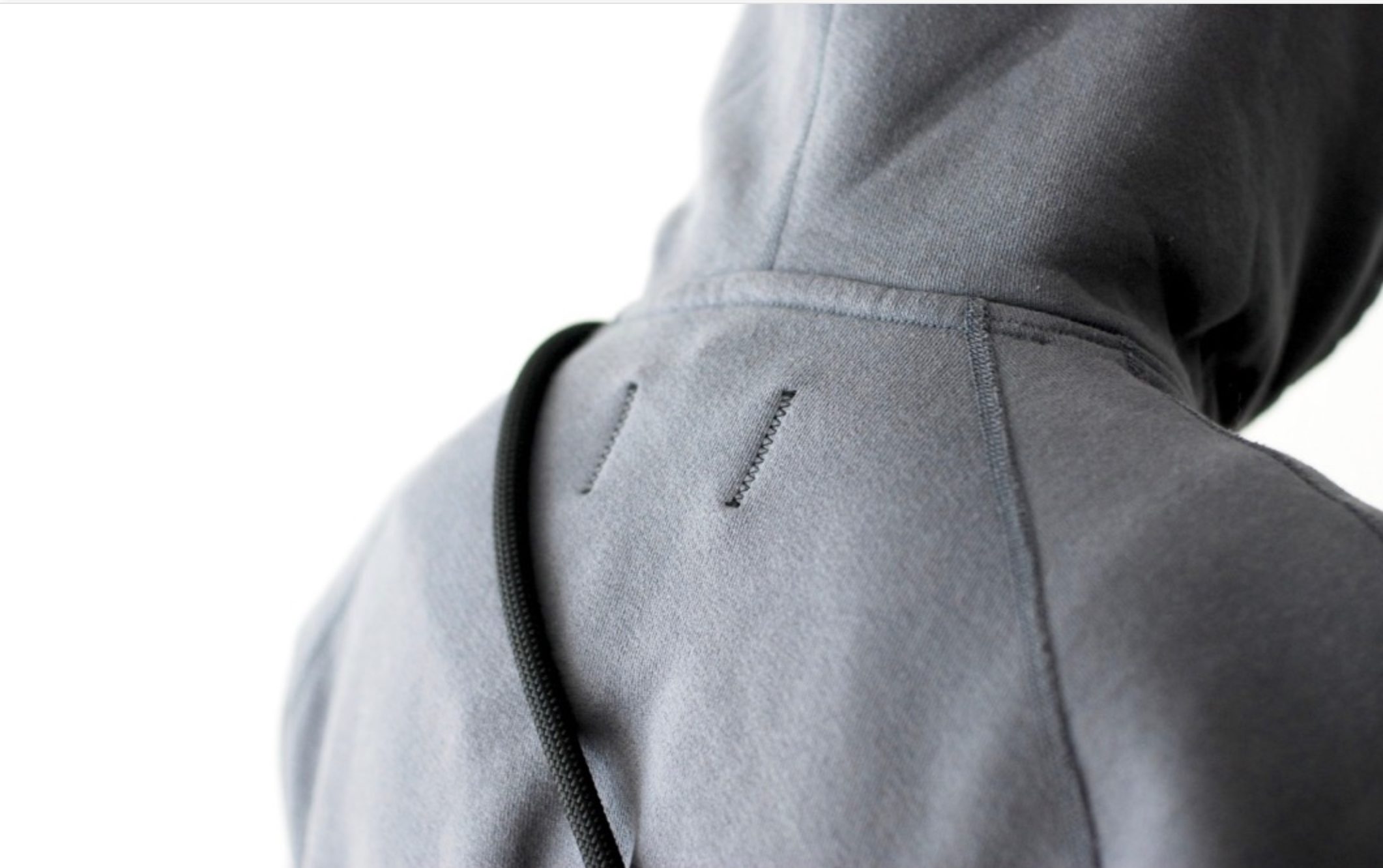 Derek wrote a great post this week about different approaches to our new normal of dressing — balancing comfort and presentability with more abstract factors, like enjoying clothing, which has been harder to do this year. Getting dressed is generally something we do to go out; with no occasions, you sort of have to commit yourself to doing it because you really want to. (Take it from someone who has tried to get kids dressed for virtual school — it doesn’t come naturally.)

The middle ground between tailored clothing (even very casual tailored clothing) and all-day PJs is broad and I likely lean a little more toward the casual if not sloppy side than Derek. One item in that category I have never been without, and which has gotten a ton of wear this year, is the simple hooded sweatshirt. The first item of clothing I remember in my life was a red pullover hoodie, which as a 5-year-old I wore every day with no shirt underneath for… probably too long.

The hoodie’s rep has fluctuated over the years — in the last decade it’s probably best known as Silicon Valley business casual, and condemned for that reason by pretty much everyone. When Mark Zuckerberg wore one in 2012 to court investors on Wall Street, Somini Sengupta wrote for The New York Times that the hoodie was a conscious anti-fashion statement, “the opposite of an Hermès tie.” While I’m all for undercutting staid dress codes, the Zuckerberg style hoodie — whether it’s a thin American Apparel fleece or, in fact, a cashmere Cucinelli number — took the sweatshirt from something sporty to something a little wiener-y.

And I’m not suggesting, necessarily, wearing a hoodie to a business meeting, whether that’s on Wall Street or on Zoom. Less 2000s Zuckerberg, more 70s Springsteen. I just mean a jeans-and-hoodie type fit, potentially just a degree or two more casual than an OCBD and denim combo. I’ve heard it argued that the hood, while designed for practical reasons and warmth, when down, provides much the same visual frame for your face as a shirt collar would. This may sound fussy, but you can fiddle with a sweatshirt hood a bit so a fold will sit nicely around your neck, like a shawl collar knit might. How often do you wear the hood up, anyway? Not great for peripheral vision. 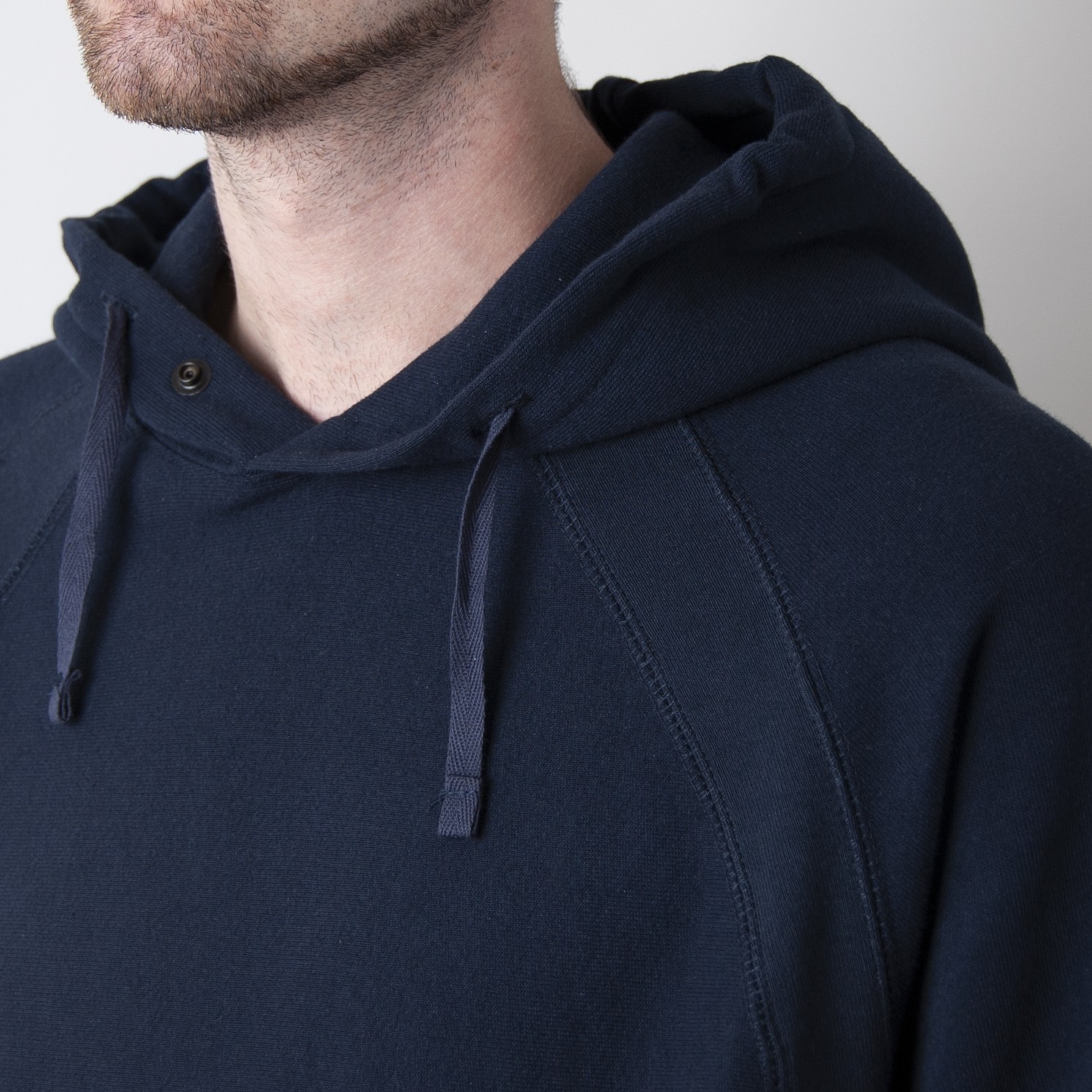 An Engineered Garments hoodie folding nicely at the neck, via Indigo and Cotton.

Really, do I need to justify the essentialness of the hoodie these days? Unlike many of the garments I argue for, like cabana sets or wild pants, the hoodie has full saturation. You probably already have one, and if not, you can buy one almost anywhere. But if you’re in need of a hooded sweatshirt, or just something warmer than a tshirt but not quite a woven shirt or woolen sweater, I wanted to point out a handful of my current favorites.

Some criteria you may want to establish first:

Todd Snyder x Champion heavyweight popover hoodie ($138, on sale for $99) — The Todd Snyder x Champion stuff hits a real sweet spot of quality and price. I like the fabric, which I’d consider a little spongy in a good way (it’s a slightly higher poly proportion than most of those I’d recommend), and it’s not too precious. The warm, cream tones in the light grey color look great with the indigo and olive tones I wear most of the time. 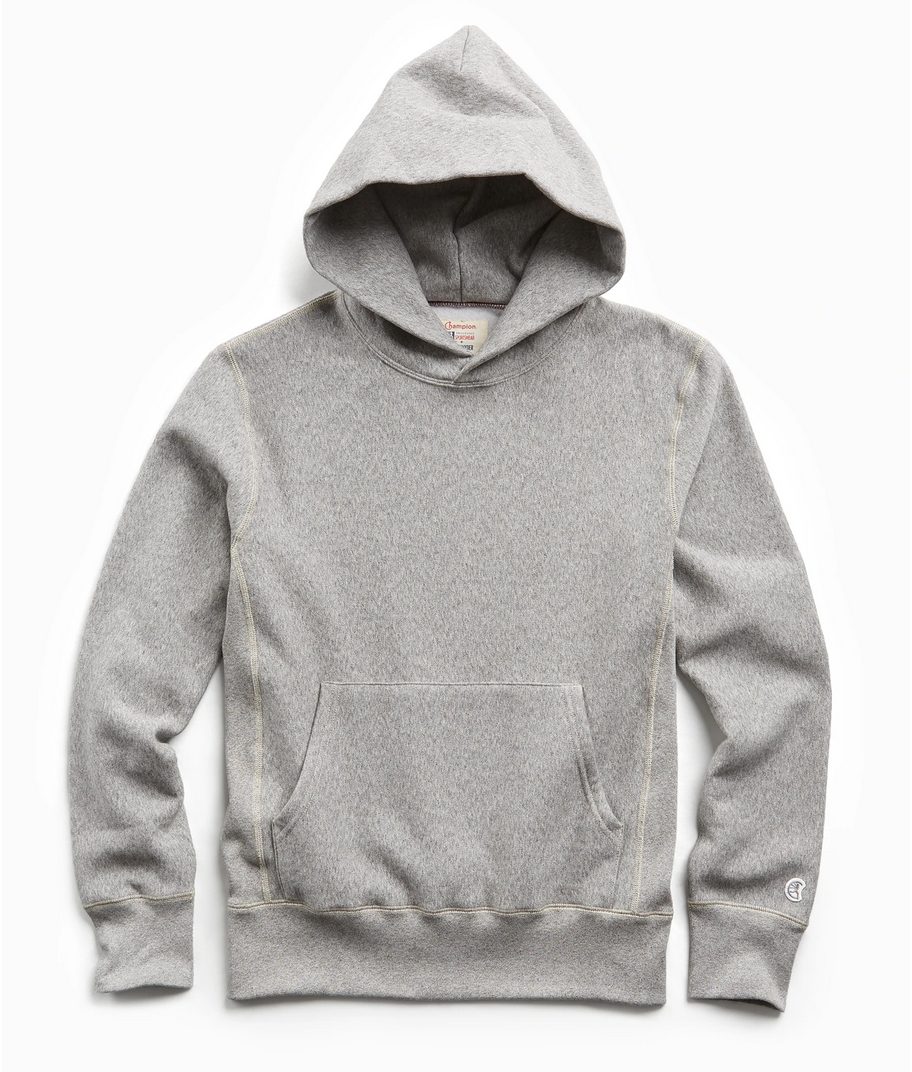 Todd Snyder’s Champion collection has been going strong for years.

Standard Issue Tees Standard Hoody ($100) — I really like Standard Issue’s tshirts; they have the right weight, cut, and stretch for me to live up to their name. Their unbranded sweats are heavyweight and the hood is nice and big. Standard Issue partner Jimmy Gorecki told me “I like a hoody bit baggier. Not necessarily intentionally oversized. Just a little extra room to breathe, and give you some motion in it.” Cool packaging on all Standard Issue’s stuff, too. 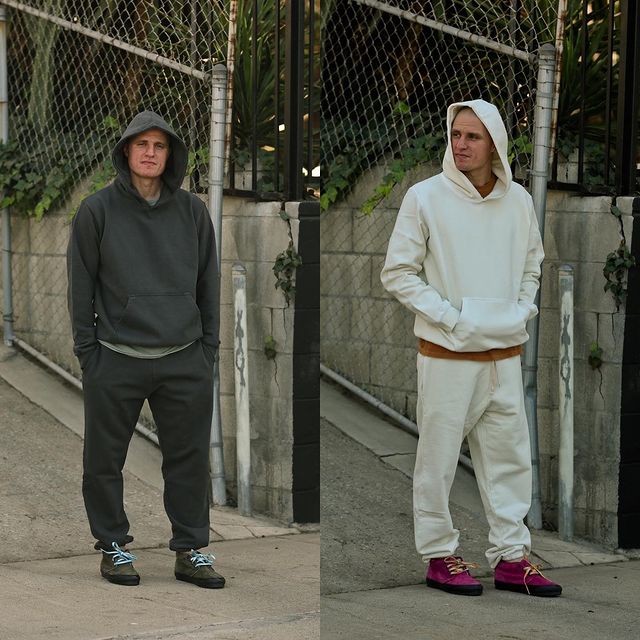 Standard Issue’s sweats fit loose but not too baggy.

Camber ($75 retail). This Norristown, PA company’s sweats are cult favorites — they’re heavy and full cut, and serve as blanks for a number of quality-oriented streetwear brands. Unfortunately, Camber themselves “serve the trade only,” so you can’t buy them direct, and sellers often can’t deliver quickly. There’s always eBay, and 18 East, who know their 90s streetwear, currently has a run of thermal-lined embroidered sweats available in store.

Engineered Garments raglan sweatshirt ($175) — I like the raglan construction of EG’s sweats, which run the rib knit panels traditionally found on Champion-style hoodies up over the shoulders (see photo of a navy one above). They also have a button neck and a smaller kangaroo pocket; a nice choice to differentiate a pretty straightforward garment. Historically, these run a bit trim/vintage style, but the cut and cloth vary a little each season. 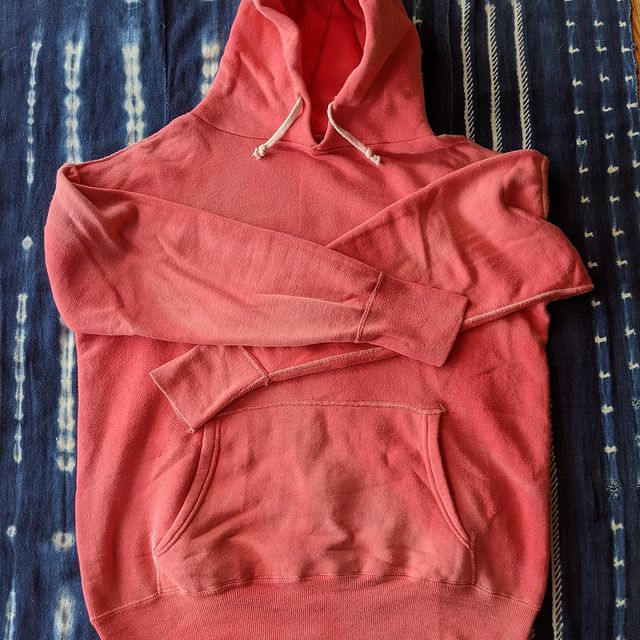 Zach at Newton Street Vintage has a nice collection of hoodies from the middle of the 20th century.

The Strike Gold hooded sweatshirt ($295) — There’s parallels in the mythology of denim and that of sportswear garments like hoodies. The relevant one here is “loopwheel” machines, a less-efficient method of knitting that largely went out of usage over 50 years ago. As with denim, niche manufacturers (as with denim, largely in Japan) valued the old-fashioned-ness of loopwheeled fabric and some are available today — they’re not necessarily better but definitely special.

Self Edge carries a number of loopwheeled sweats from The Strike Gold, Merz B. Schwanen and others. Kiya from SE told me “I personally love hoodies, especially zip hoodies… a good one’s fabric will age gracefully over years of use with the knit pattern becoming more apparent as the fabric is worn and washed.” The Strike Gold’s version has a zip and two front pockets, and is cut quite trim and shorter, more vintage style, than some of the others here.

3Sixteen does some very heavyweight zip sweats that are terrific. Champion’s basic reverse weave hoodie is quite nice for $60 and can be found on sale for even less. Vintage Champions are also great; old, heavily washed and worn sweats are soft and tough, just keep an eye on how they fit. J. Crew’s french terry hoodie is totally fine! I’ve heard good things about Los Angeles Apparel’s heavyweight sweats. Entireworld’s hoodies seem a bit lighter weight — maybe a reasonable replacement for the old American Apparel California fleece pieces. I don’t think the zip details on some John Elliot sweats have aged particularly well, design-wise, but the pieces themselves look and feel great.