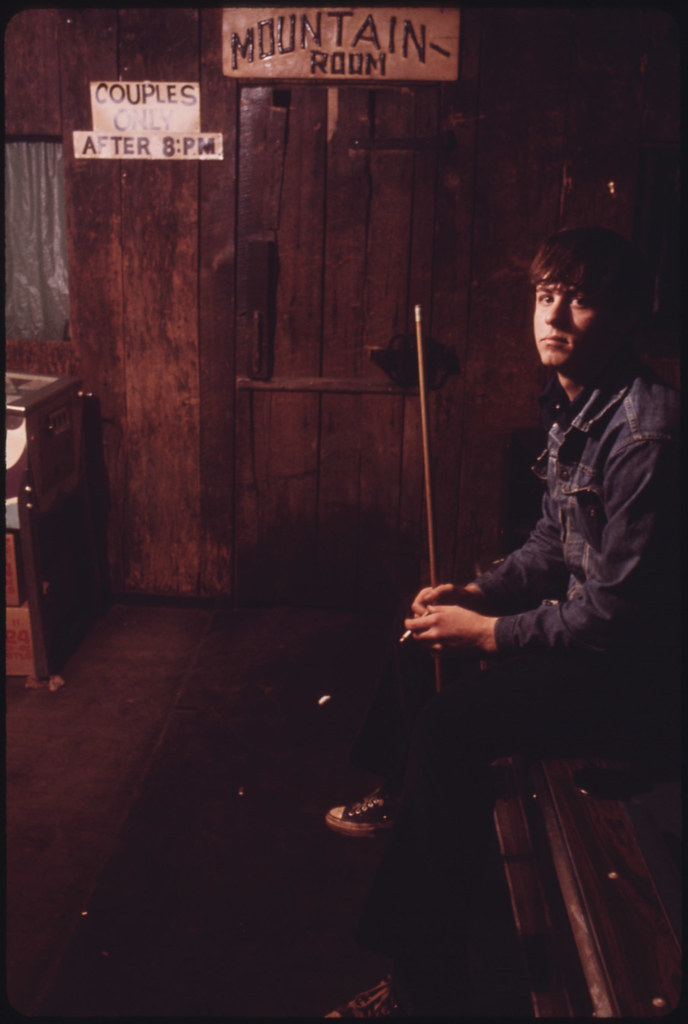 Denim jackets, Chucks, and pool cues go together like teenagers and delinquency. Robert Johnson in coal-mining town of Clothier, West Virginia, 1974; from the Documerica project.

Our collective understanding of the aesthetics of an era — how people looked, how things looked, how the world looked — sometimes depends on very few actual surviving images. When you think of American during the Great Depression, for example, you may think of the documentary photographs of Dorothea Lange, Arthur Rothstein, or Walker Evans.

These photographers were commissioned by the U.S. government’s New Deal-era Resettlement Administration/Farm Security Administration to capture life in 1930s America as those agencies embarked on ambitious projects to resettle and relieve thousands of displaced working families. The agencies helped build a number of communities that still exist, but their popular legacy is largely in the affecting (and sometimes beautiful) images of poverty-stricken Americans fleeing the dust bowl.

A New Agency and a New Awareness: Documerica

In the 1970s, the government again commissioned a group of photographers to go out and capture a slice of American life: the Documerica project. The Environmental Protection Agency had just stood up, and in the post-Silent Spring era, Americans were concerned about human impact on the natural environment. Informed in part by FSA’s Rothstein, the agency sent dozens of photographers out to communities across the country; according to project director Gifford Hampsire, Americans had become concerned that we “fouling our own nest — we were the easy-­come easy­-go society, the throw away society, the society that was dependent on convenience goods without regard to its cost to our only world.” 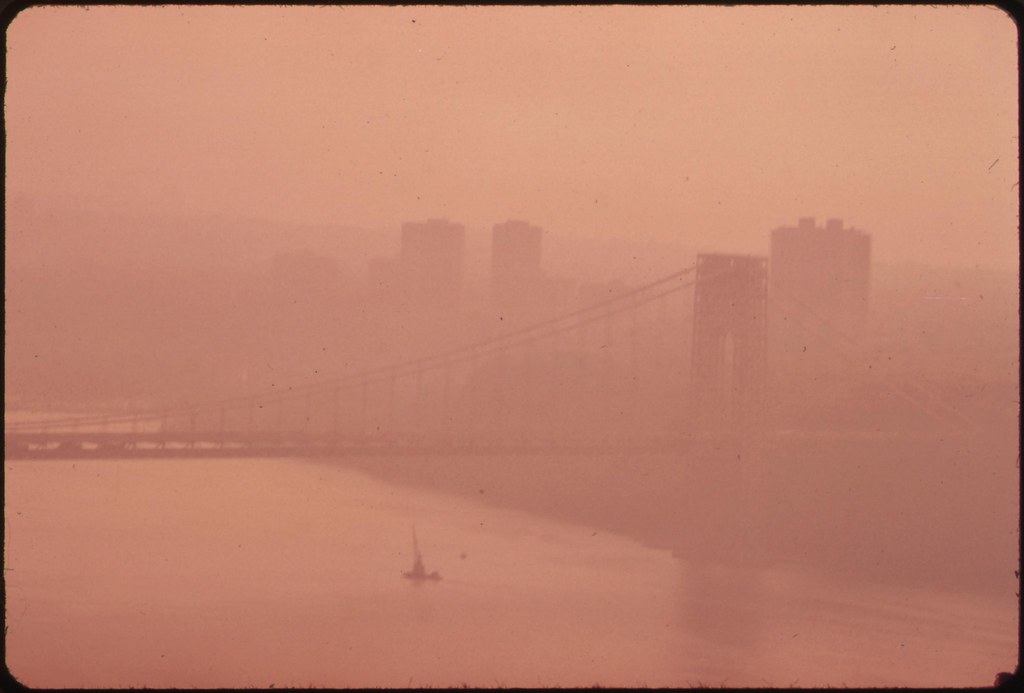 The National Archives has digitized hundreds of the resulting Documerica photos. To 2019 eyes, they seem to depict the haze of the 1970s. Every photograph ever taken has some purpose and editorial perspective; it’s clear that these photographers were out to drive home the point that the engines of modern society — industry, power, urban development, tourism — were messing with nature. Oil slicks, thick smog, and garbage-strewn streets and parks dominate the vividly toned film shots.

Also captured, of course, are Americans. Going to work, going to church, spending time at home, on vacation, in retirement. Compared to the New Deal, Depression-era subjects, their hair is a bit longer, their collars a bit bigger. The fabrics they’re wearing maybe a bit more synthetic, overall. Documerica did not set out to capture elite or wealthy subjects, so it’s not exactly Slim Aarons glamour. But sifting through the National Archives digitized collection of 1,000+ images, I found hundreds of amazing pictures, and dozens to be inspiring, style-wise. Pictured below are a selection I chose for a number of reasons. Some is good purpose-wear: western or workwear, skiwear. Some is interesting as a style time capsule. Some I just liked the vibe. Check out the entire archives, which were digitized for an exhibit years ago but live on on flickr. 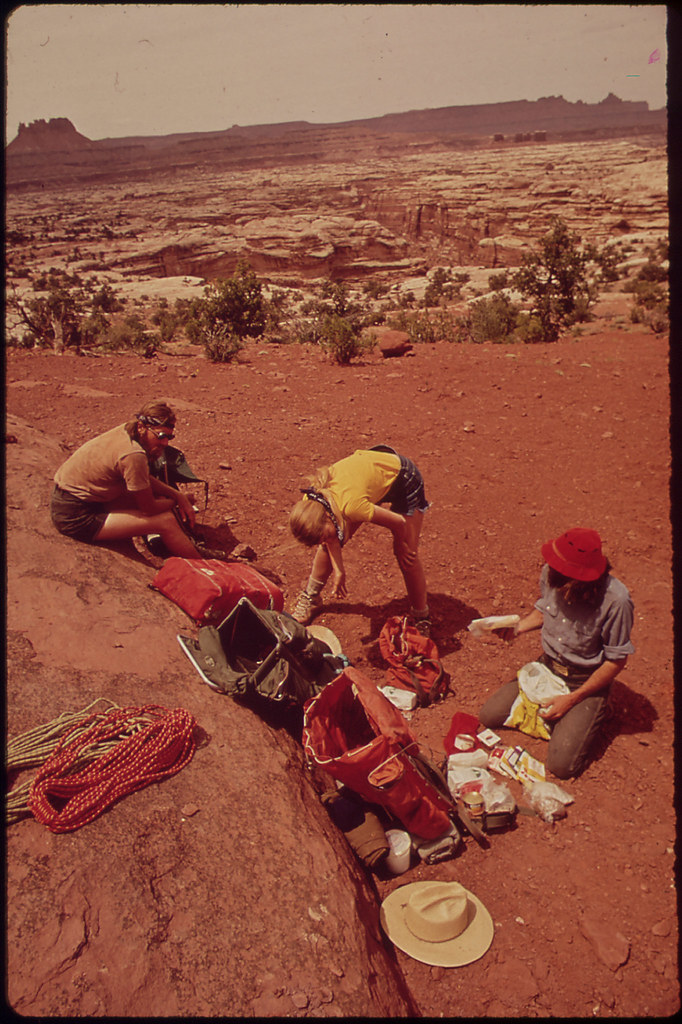 A group of hikers in Canyonland National Park in Utah, 1972, by David Hiser. One of these guys is Glen Denny, a famous climber and photographer himself, who’d captured Yosemite climbing in the 1960s. 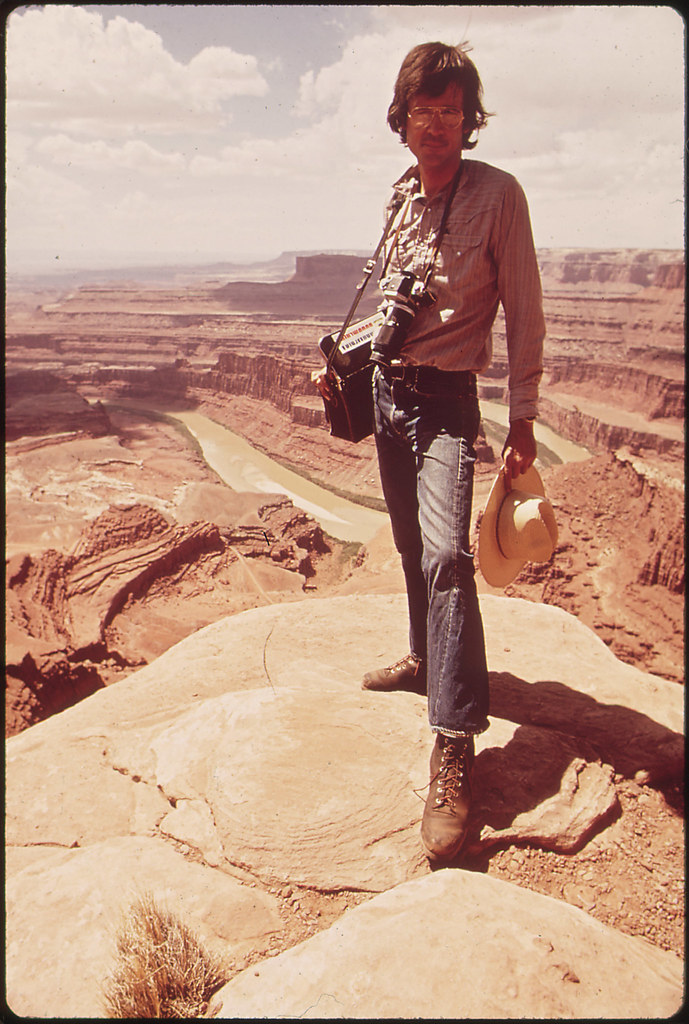 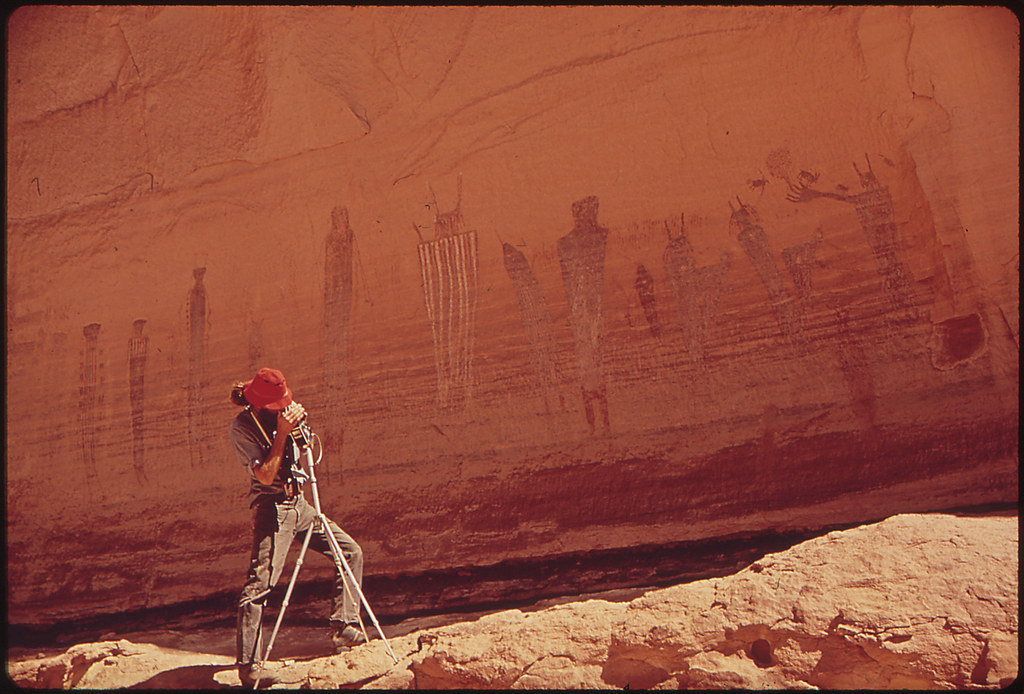 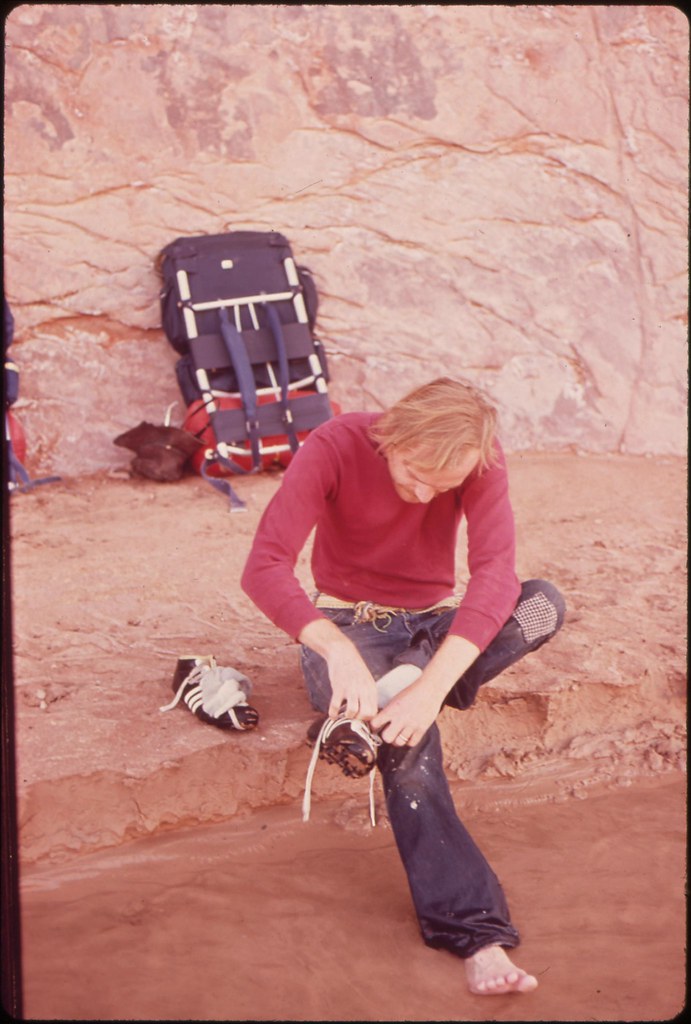 A hiker in Utah in 1972 by photographer Boyd Norton. Hiking in Adidas cleats with patched denim. 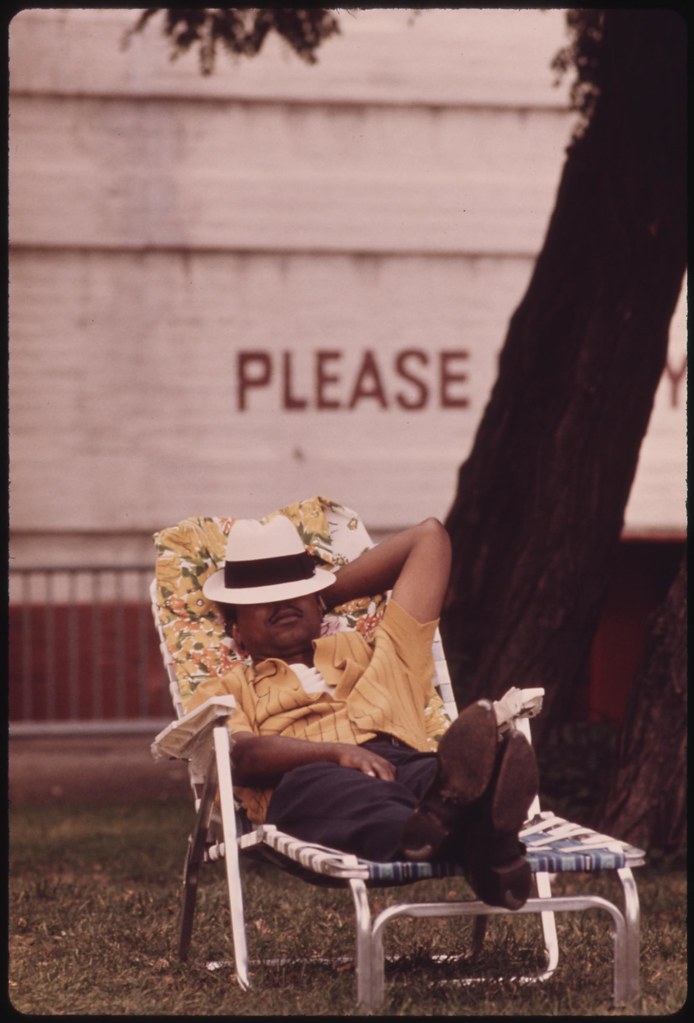 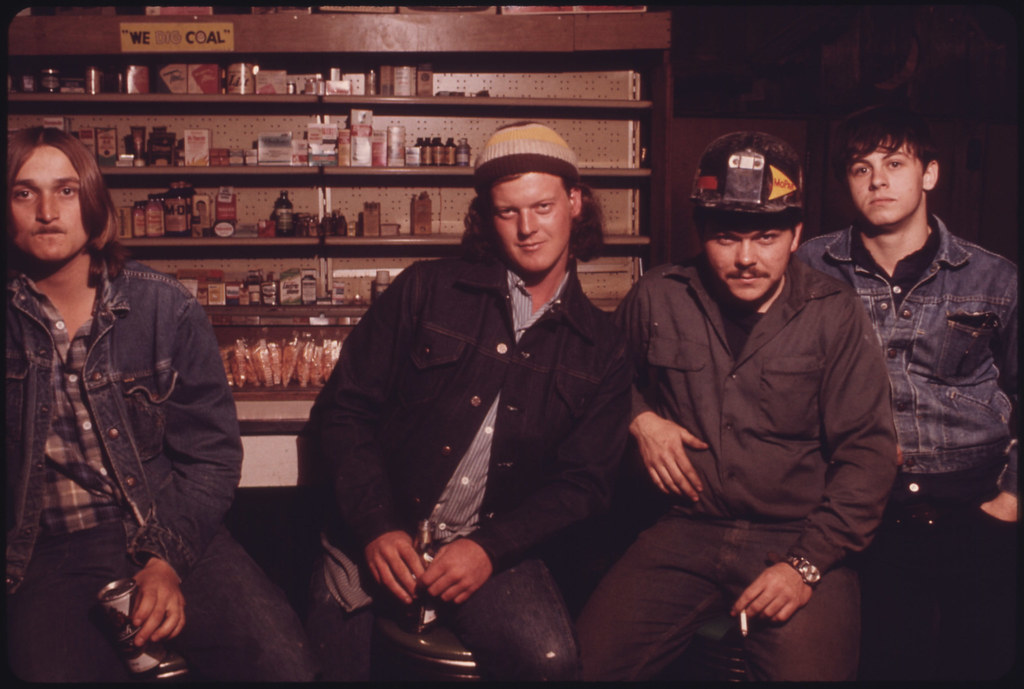 Young men in a bar in coal country town of Clothier, West Virginia, 1974. 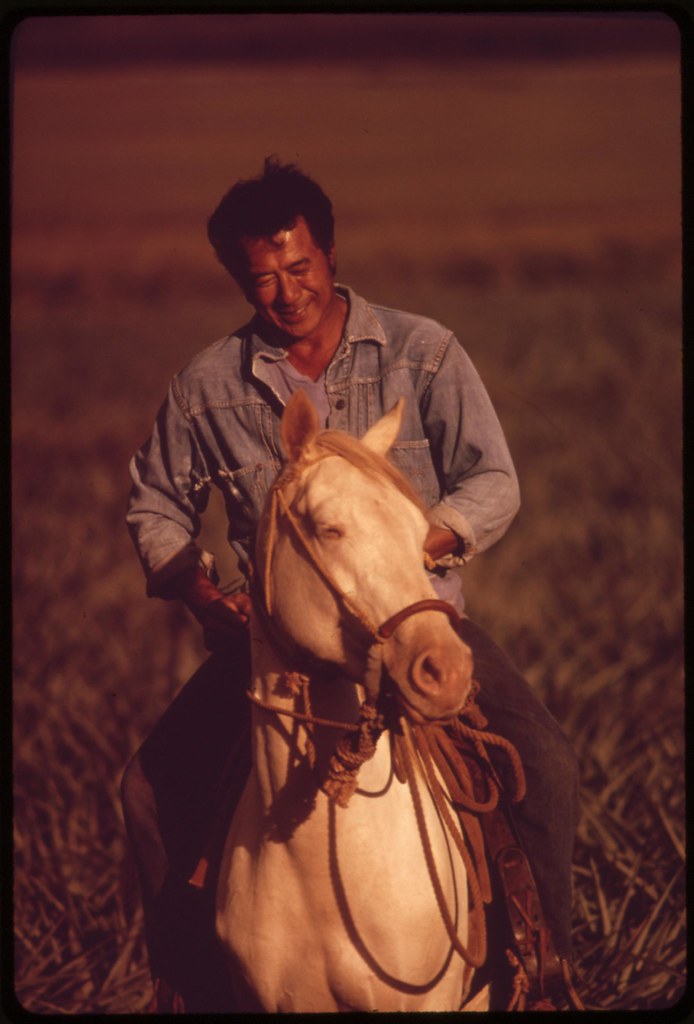 Worn denim on a pineapple farm in Hawaii, 1973. 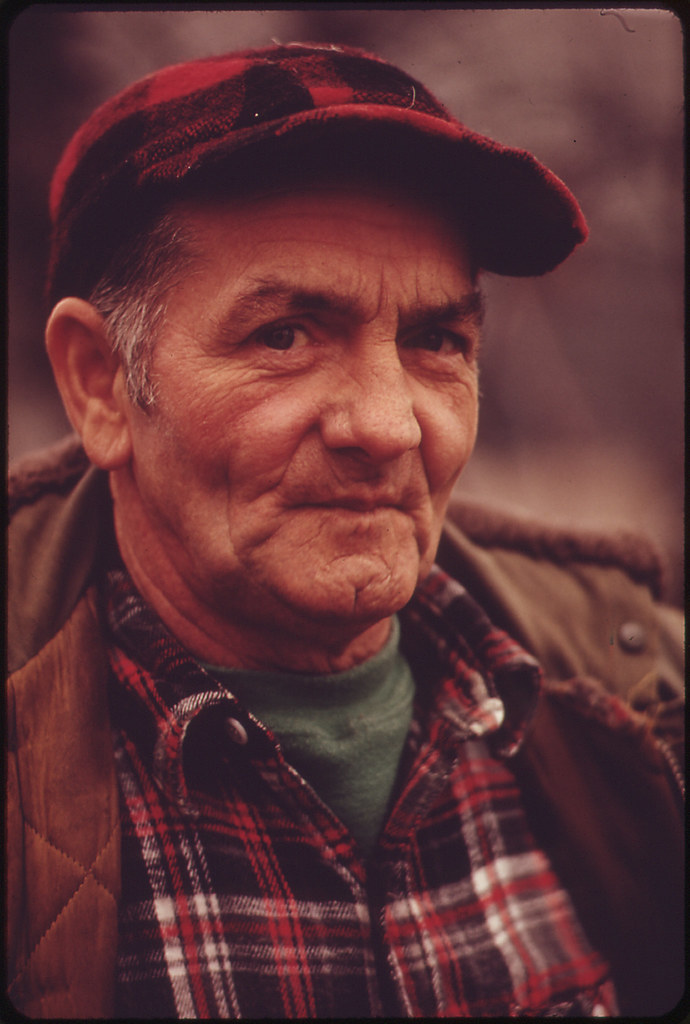 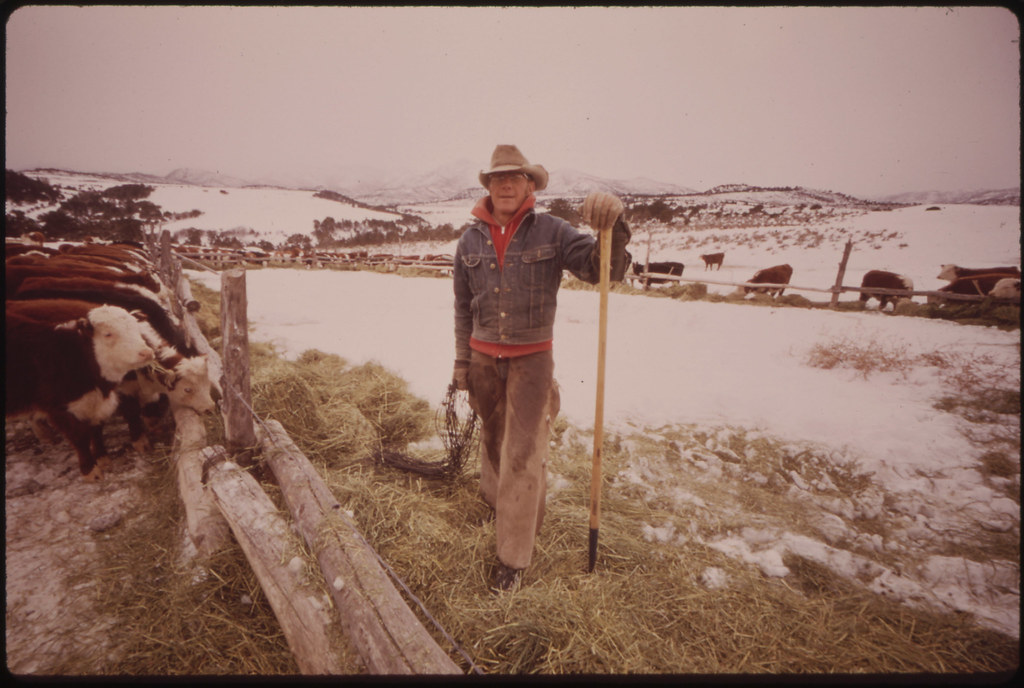 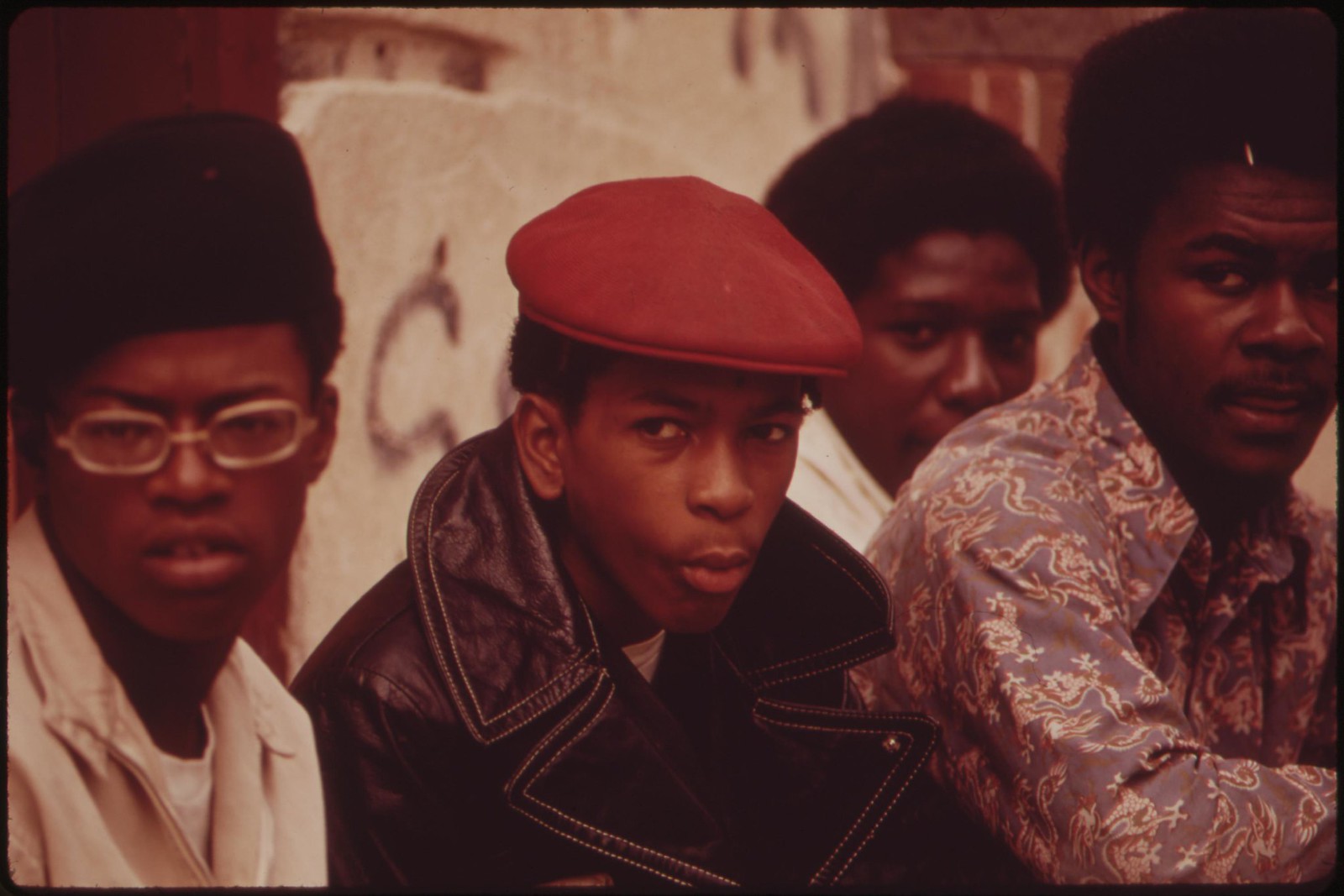 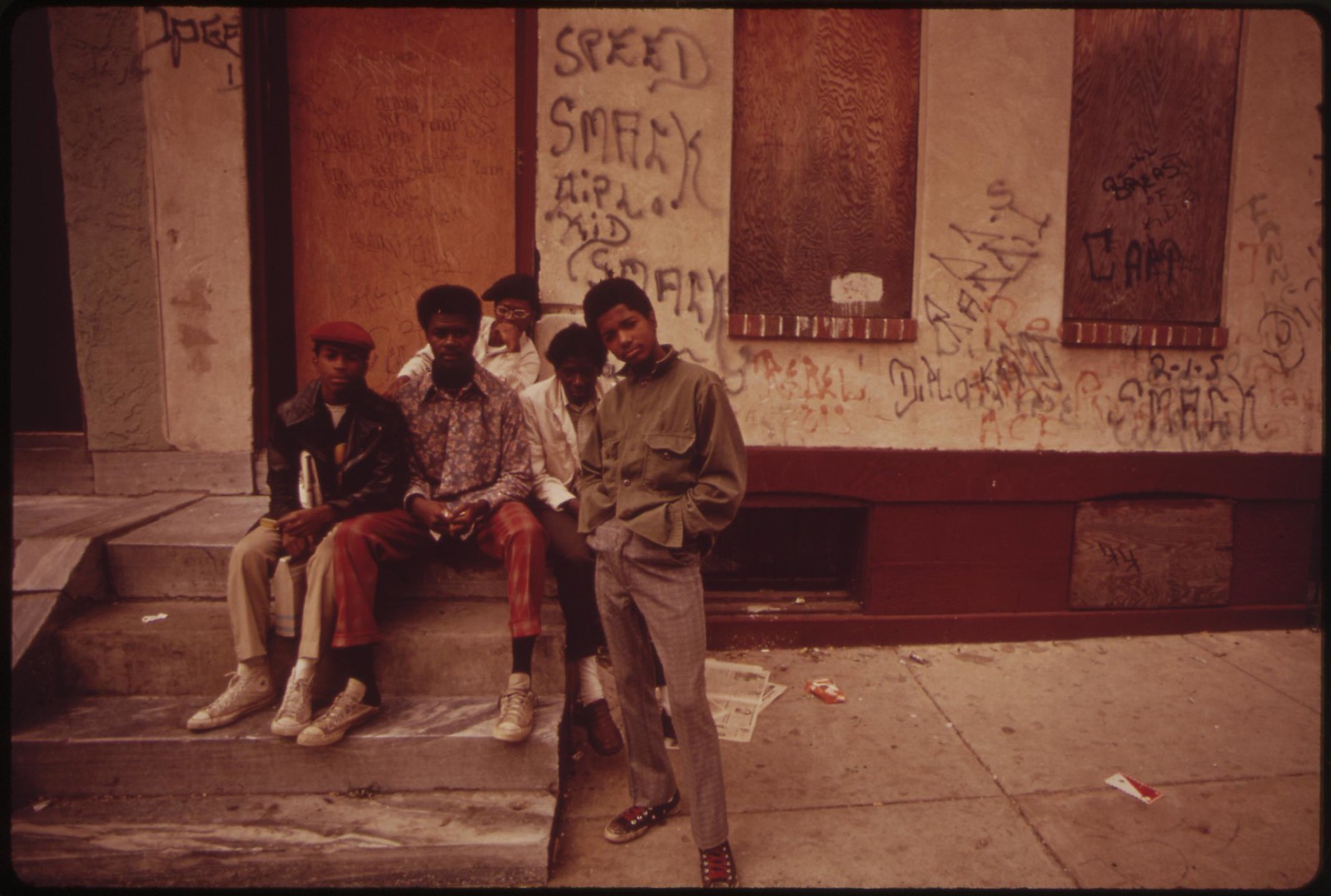 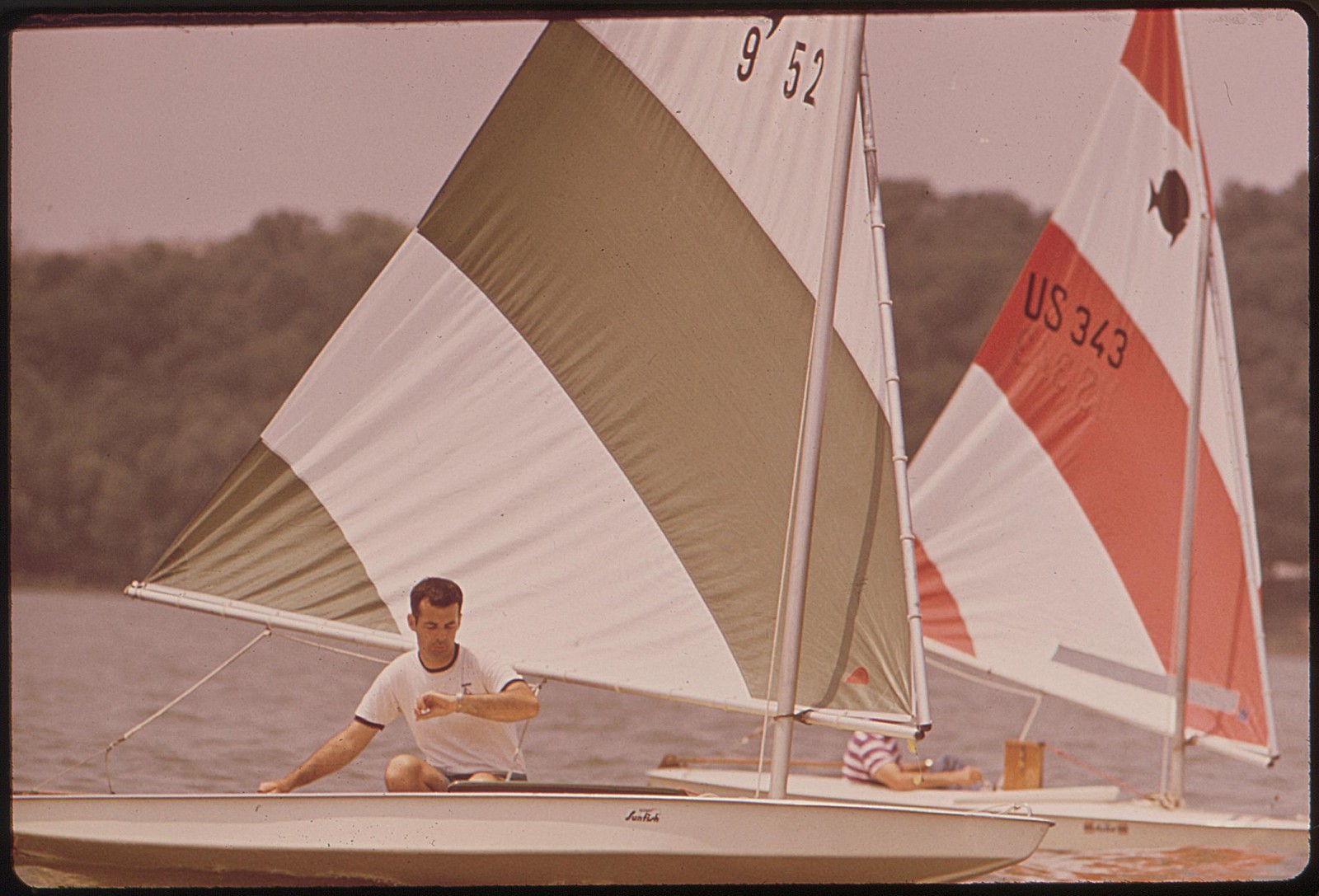 Tones. Regatta on the Ohio River in Louisville, 1972. 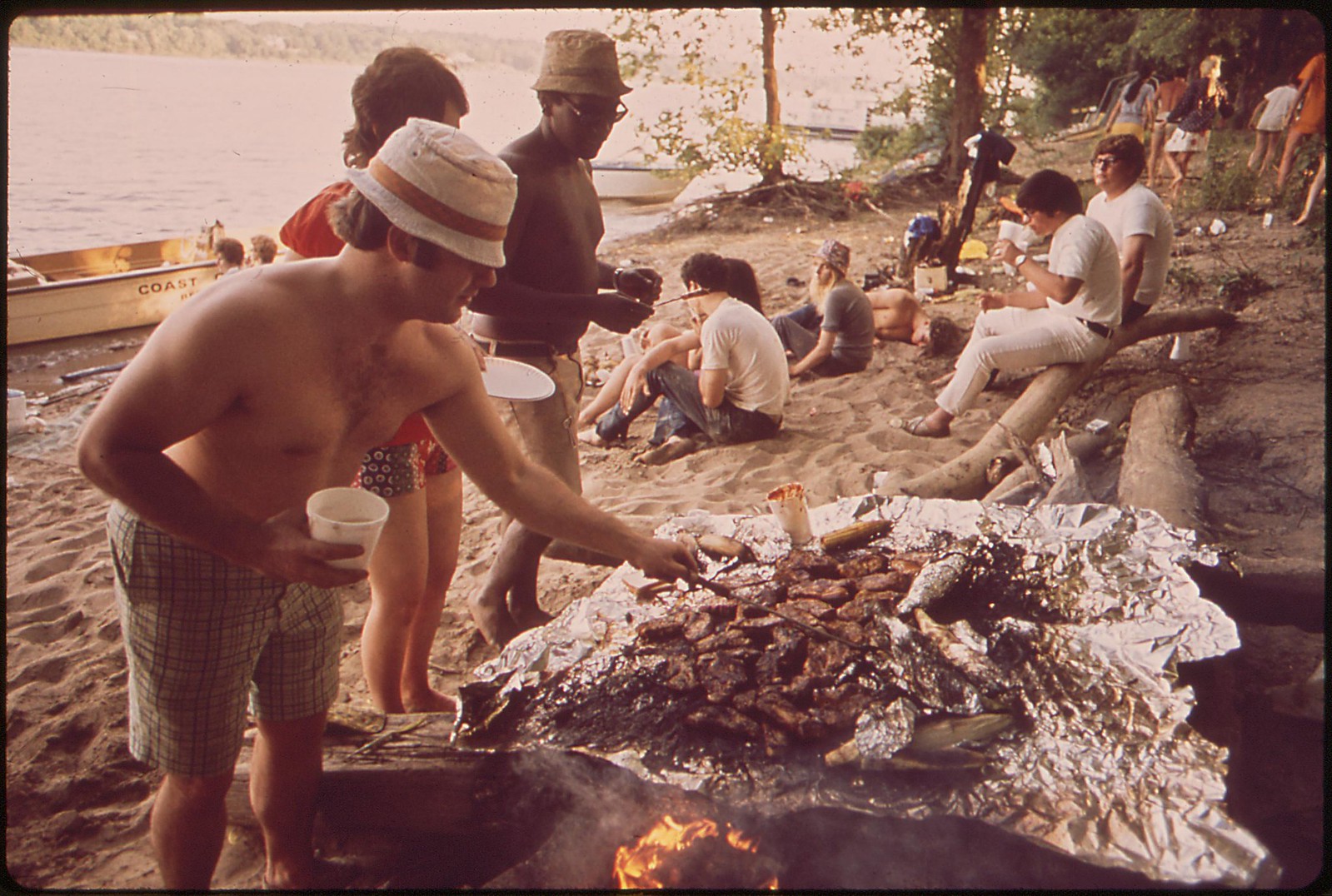 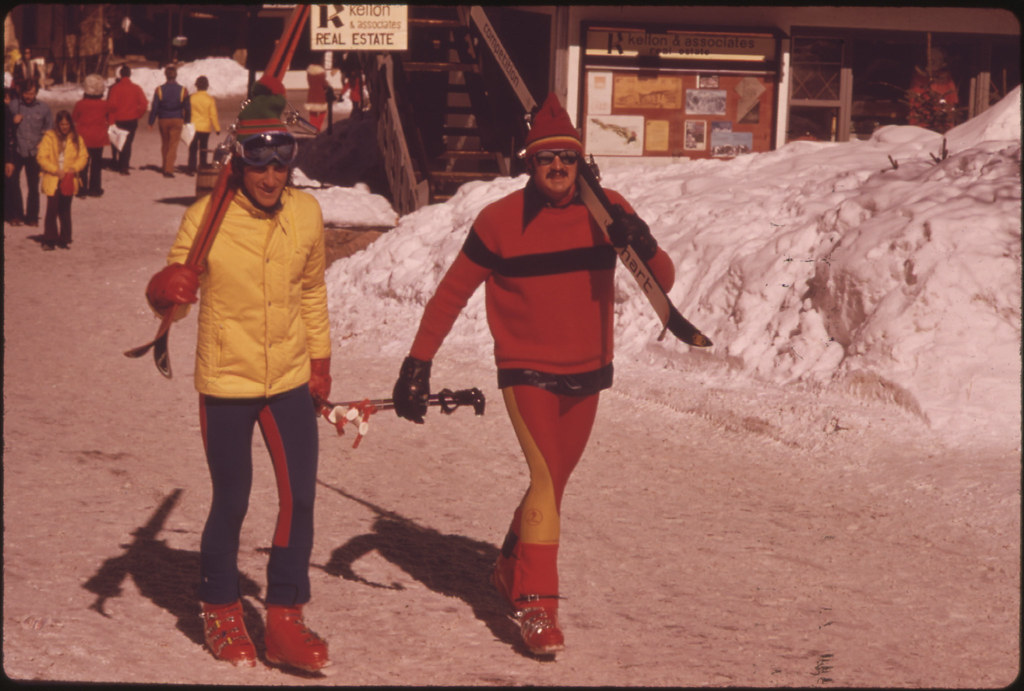 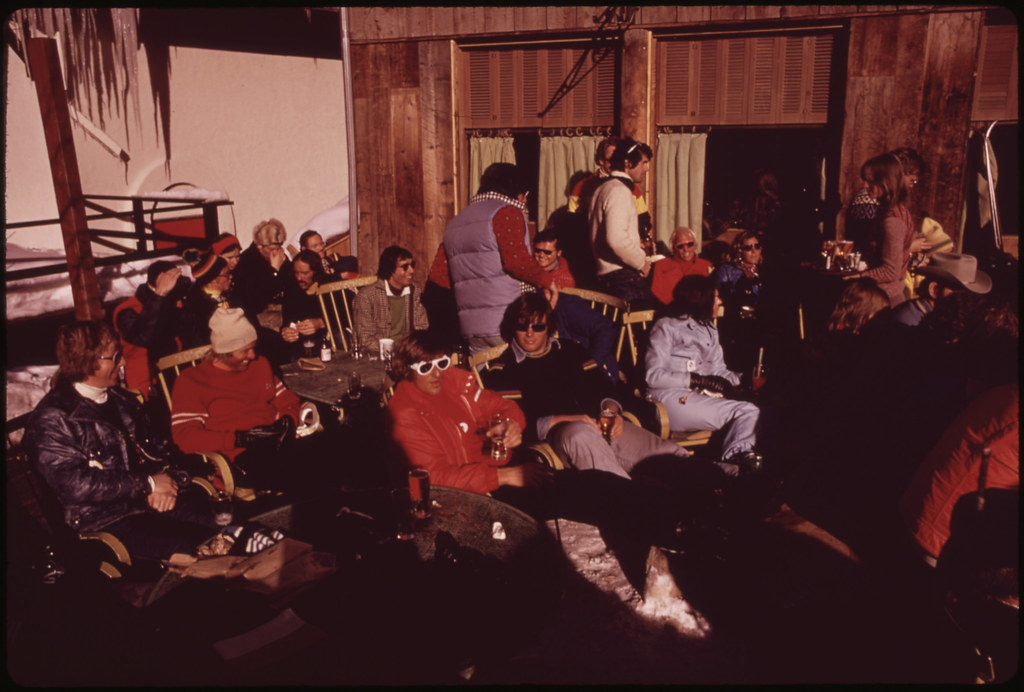