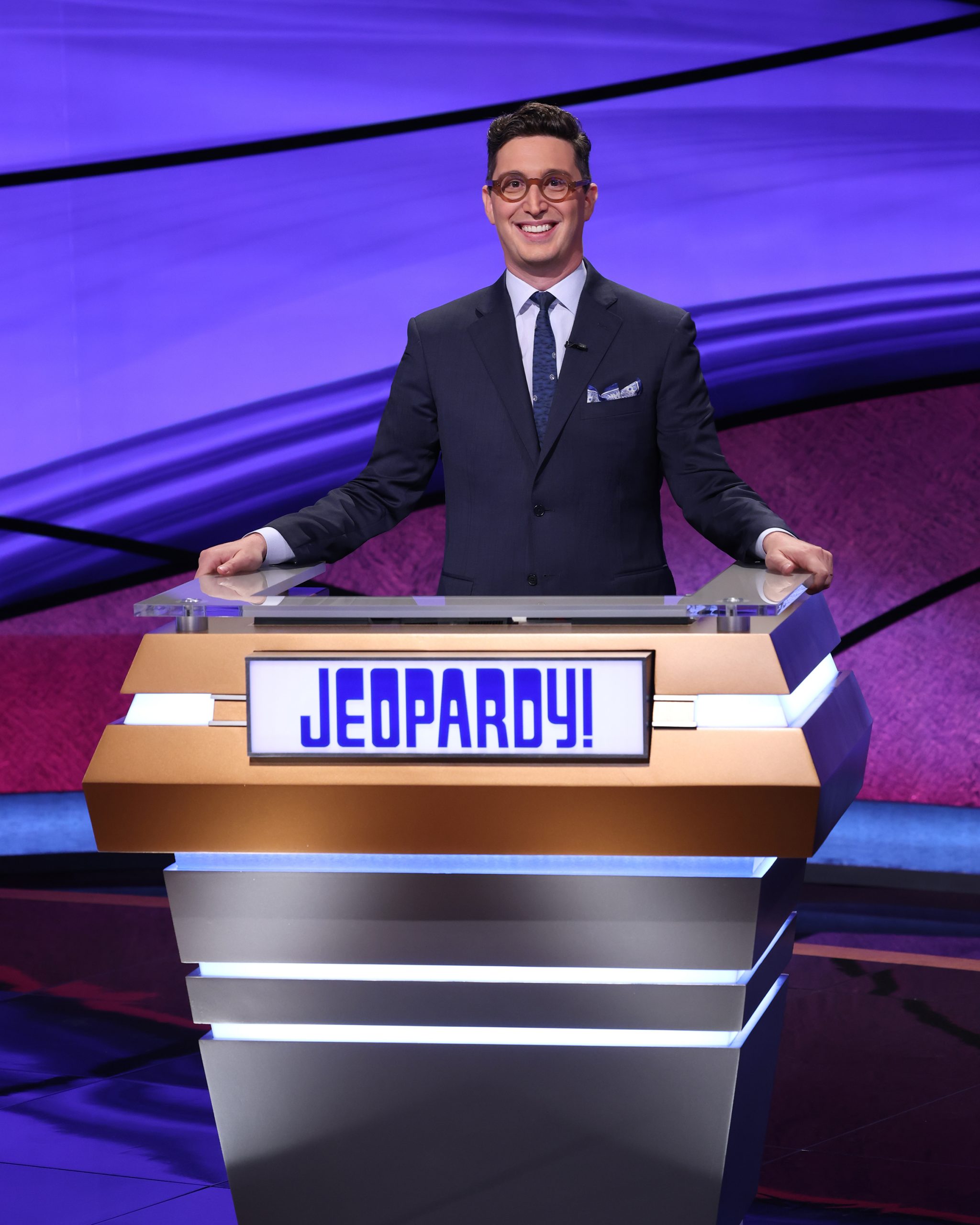 The cliche goes “dress for the job you want,” but what if the job you want is hosting the greatest quiz show of all time, and stepping into the shoes of one of the most popular personalities in television history? For Buzzy Cohen, Jeopardy! champ and recent guest host on the show Alex Trebek presided over for decades, it naturally meant wearing a suit and tie — which he’s worn most days since he first appeared on the show in 2016 — but turning down the volume just a little on his own sense of tailored style, honed since he was a kid in his father’s clothing store in New Jersey.

“My role as the host was to give the contestants a good tournament. I didn’t want to dress in a way that was not me, but I wasn’t trying to pull attention to myself.”

That marked a bit of a change from Cohen’s first Jeopardy! winning streak, which would change the course of his life and his wardrobe.

Most Jeopardy! contestants dress in a manner I’d classify as “fine.” The show has a dress code, dictated by propriety (this is a serious quiz show, not The Price Is Right) and camera friendliness — white shirts without a jacket are too bright, fine patterns can cause moire effects, and you don’t want to blend with the set too much. A contestant wrote on Reddit that they were asked to wear “dressy casual” clothing: suit, sport coat, or sweater, shirt, and tie. (College Championship players wear their schools’ sweatshirts.)

When I first saw Cohen on the show, though, I felt I recognized a fellow jawnz enthusiast. His suits were nicely pressed and fit well. Shirt collar points arched and tucked neatly under his peak lapels. Ties provided contrast with his shirts and harmonized with his suit fabric tones. Plus he had cool glasses (they’re made-in-France Vue DC).  This was dressing with some intention.

“The first time, I just wanted to wear suits and ties. It was more traditional — I think I wore a repp tie one day. I wanted to say hey, this is a big deal, I want to look my best.”

While Cohen wasn’t a suit-everyday type of guy before Jeopardy!, he did come to the show with a degree of men’s tailoring knowledge, built from a young age. Before retiring a few years back, Cohen’s father ran a specialty men’s store in Livingston, New Jersey. And his family was involved in menswear for three generations, selling everything from Levi’s to made-to-measure suits, first in Newark, later taking over an Army-Navy store space in Livingston in the 1960s.

With that influence (and access to clothes), Cohen said he took to dressing well from childhood. “We have some home videos from kindergarten, we did a presentation for our parents, and all the kids are in t-shirts. I wore a maroon velvet double-breasted jacket and tie, and pants and dress shoes. I told my parents that’s what I wanted to wear.”

And Cohen knew who to call when the opportunity to compete on Jeopardy! came. “When I found out I was going to be on Jeopardy!, my dad made three suits for me to wear on the show.” For what it’s worth, Cohen says his dad hates every tie he wears on TV. 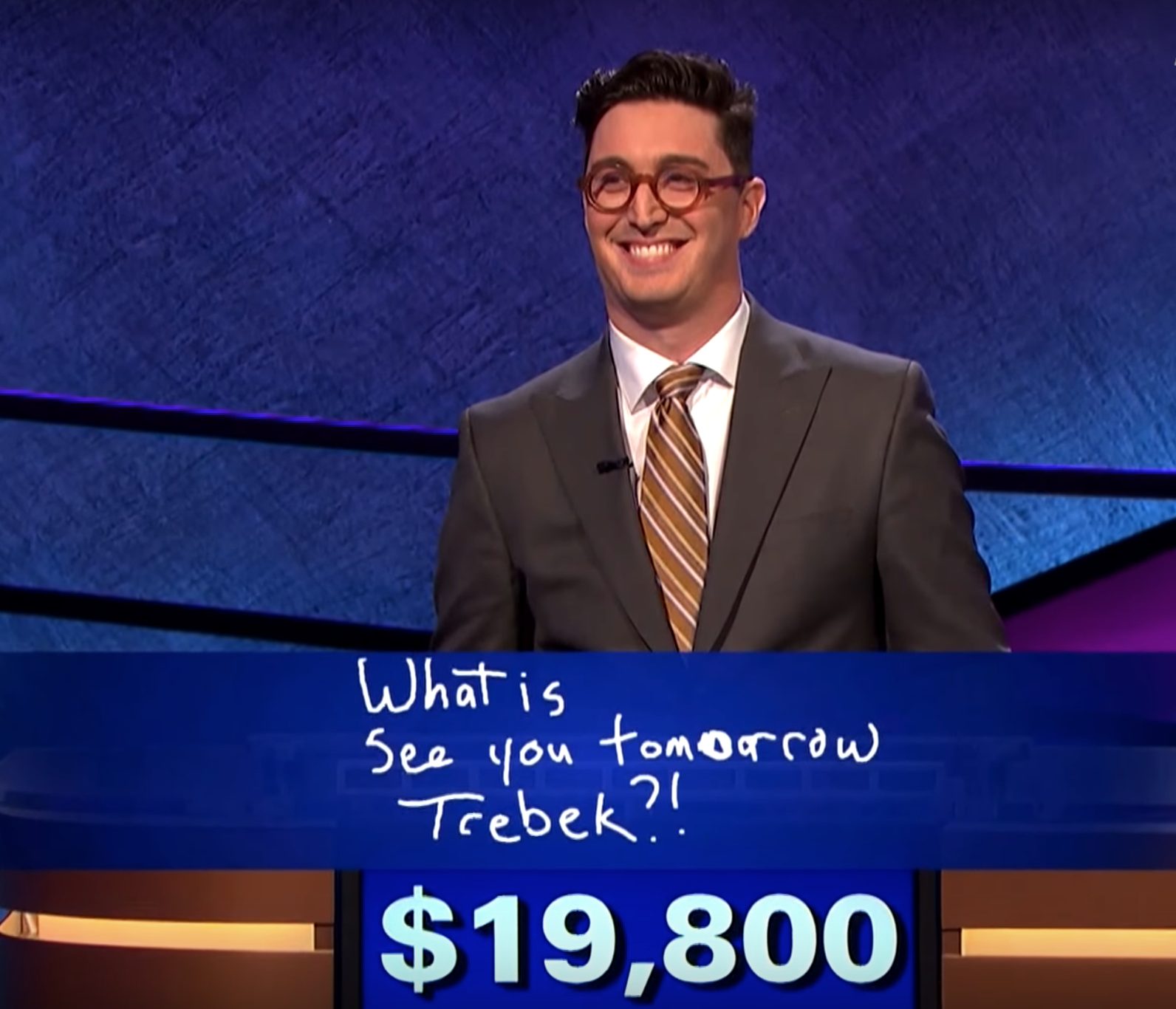 “After the shows aired, I realized that, with the suits I had already, I had enough to wear a suit every day. I did it for a week, on a lark. And I really loved it. I was much more comfortable, I felt more at ease and myself.”

Since 2016, the suit has been Cohen’s uniform. He works in advertising and music supervision at the company he founded, The Teenage Diplomat, and admitted maybe a suit sticks out a little in Los Angeles, a pretty dressed-town town overall. It’s not something Cohen would advocate for every guy, but he feels it works for him.

He told me the philosophy of a family friend had an impact on him.  The friend was retired, but still wore a suit and tie every day. “He said whenever you need to perform your best, whether it’s a presentation or job interview, your wedding or a court appearance, you’re generally in a suit and tie. And most people are not very comfortable in a suit and tie, and they do themselves a disservice because, in a suit, they’re already uncomfortable. I’m just going to wear a suit, so when I have to perform my best, it’s just another day.”

Cohen is aware of the idiosyncrasy of wearing a suit regularly when he doesn’t have to. He talked about it as sort of maintaining a tradition that’s disappearing. Cohen, who’s in his 30s, said “My generation is the first where we didn’t wake up and put on a suit and tie every day. Before, even if our parents hated wearing it, you grew up and saw it every day and absorbed some of that. With the rise of casual offices in the mid’ 90s, the kids of those people only saw their dads wear a suit and tie for a special occasion.”

It’s not that everyone should be wearing tailoring every day, but once the comfort level with it is lost, it’s hard to get back — this becomes a barrier to wearing tailoring at all. “Beyond just the practicality and cost of wearing a suit, there’s a familiarity with the language that’s being lost.”

Getting an Edge on the Competition

When Cohen returned to the Jeopardy! set for the Tournament of Champions in 2017, his looks were stronger and more confident. Brighter fabrics, ties and pocket squares that can reasonably be called combos. He capped it with a salmon-toned jacket in the finals episode, when he pulled in $250,000 as the champ. 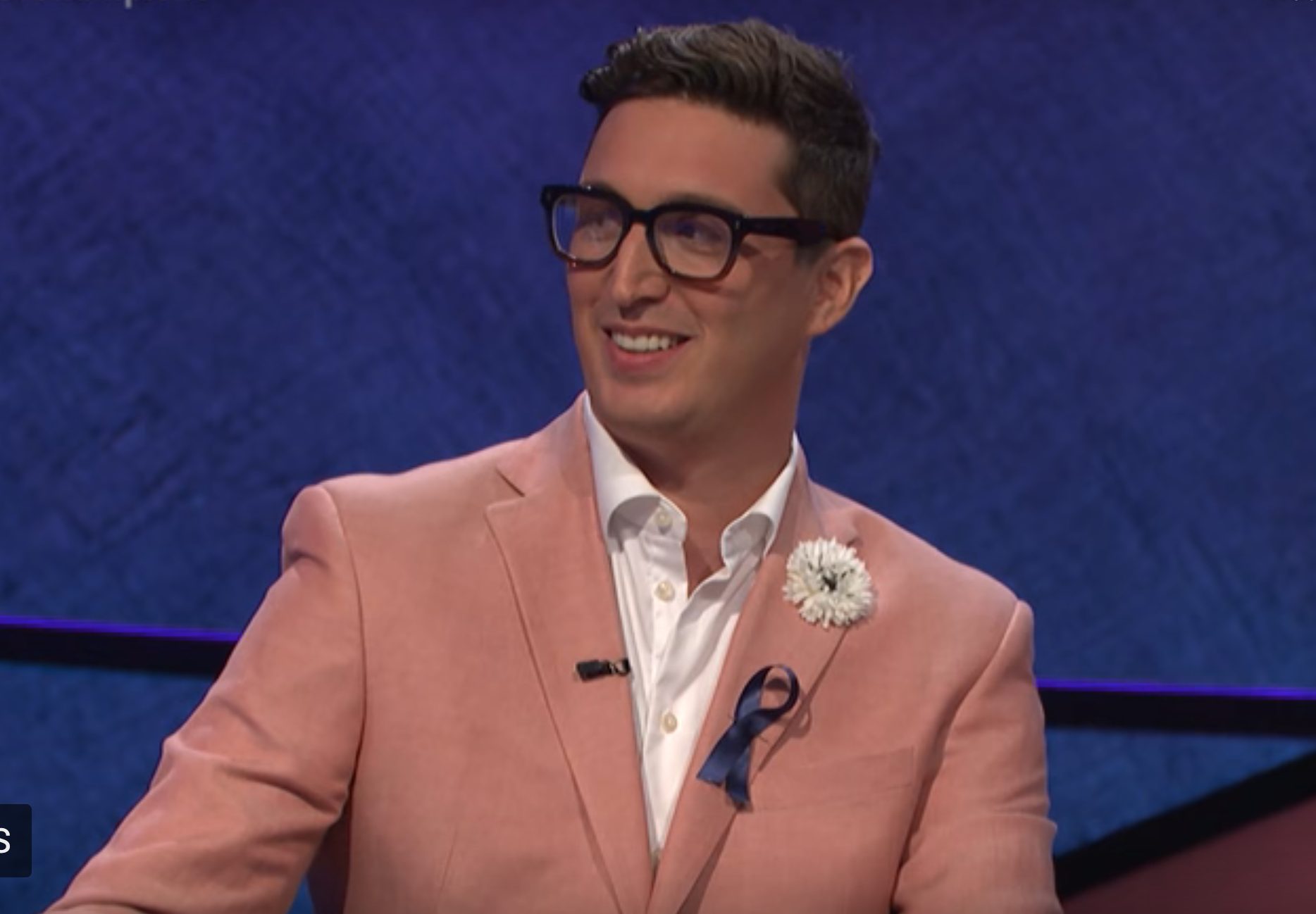 “For the Tournament of Champions, I had gotten more comfortable and found more ways to be more expressive in menswear. The first suit I wore was a pearl gray linen silk blend. I wore it with a floral tie and pink pocket square. I wasn’t trying to be overly aggressive about it, but it was a little bit of intimidation, too. There’s the line in Catch Me If You Can: ‘You know why the Yankees always win? Because the other team can’t stop staring at those damn pinstripes.’”

Talking with Cohen, I got the feeling he approaches a lot of things the way you might approach an advertising pitch — understanding the demands of the situation, storytelling, presenting confidence. He told me that, with the salmon jacket in the Tournament of Champions, he had a very specific thought process. He knew that if he made the finals, he’d need four outfits. He knew he wanted to make a statement, potentially, as a winner. “The idea I wanted to present with the last look was ‘after this, I’m getting on my yacht to celebrate.’ I even wore white loafers, even though no one sees your shoes.”

He even got Alex Trebek’s endorsement: “Not only are you bright,” Trebek told Cohen in the finals episode, “but you’ve got style.” Cohen told me he had an ascot lined up for Jeopardy! All-Star Games (in 2019), but his team got knocked out before he had a chance to wear it. 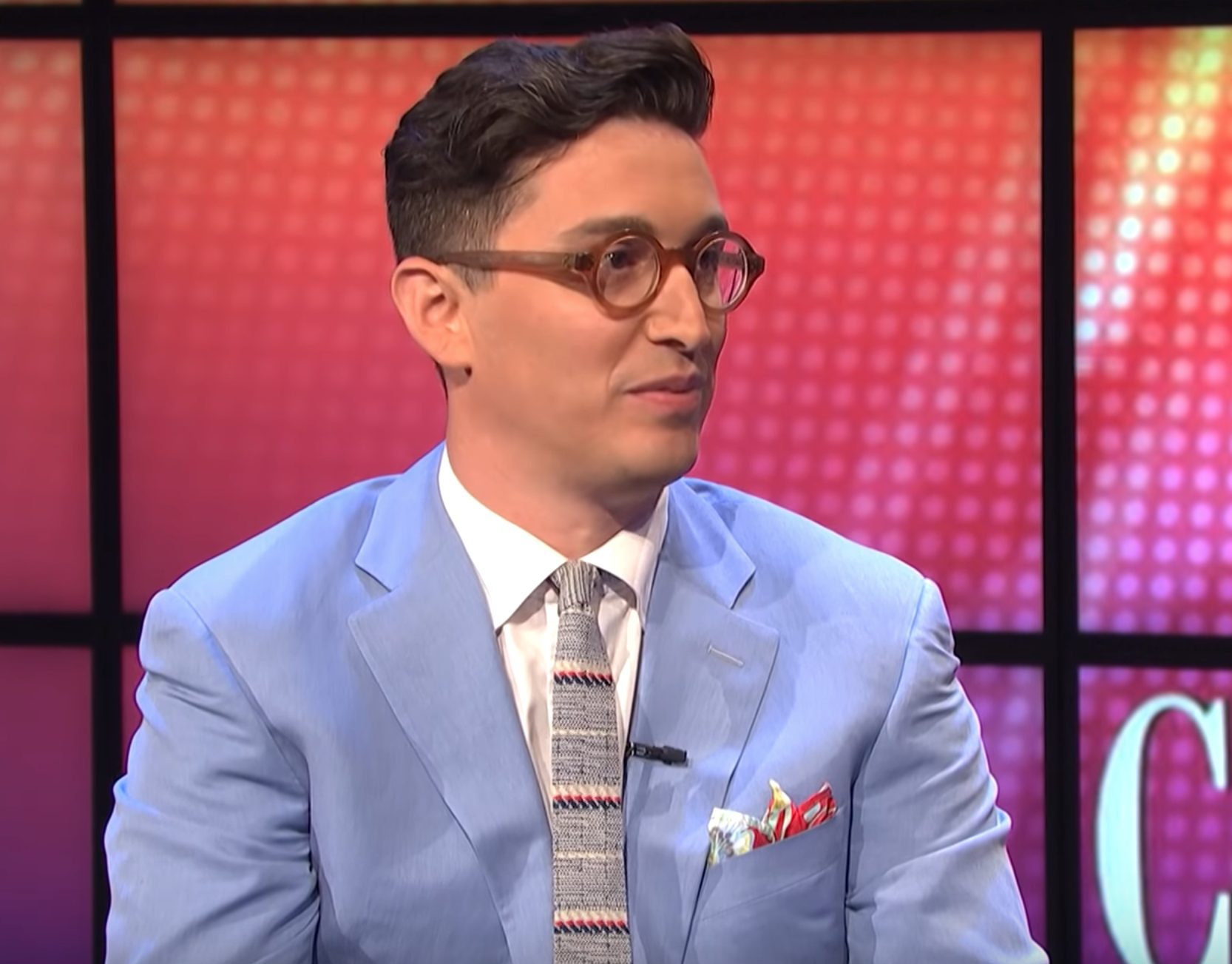 Buzzy Cohen being interviewed as a team captain for Jeopardy! All-Star Games.

Updating the Look for a New Role

As a contestant on the show, Cohen evoked strong opinions. Some viewers loved his confidence and his rapport with Trebek — about as close to banter as you’ll see on the show, which has to fit a lot of competition into its short nightly runtime, with little room for small talk (watch a supercut of Trebek moving on from contestants’ stories with a polite but firm “good for you”). Others found Cohen to be “punchable” (a pain I know all too well). But this year, Cohen had a shot at translating that ease and energy into a potential host gig.

Jeopardy! is publicly auditioning hosts, including TV vets such as Katie Couric, other celebrities, and former contestants (Ken Jennings and Cohen among them). As a contestant, Cohen joked with Trebek about taking over as host, and he got the chance to guest host the Tournament of Champions show this spring. The reviews were solid — viewers dug his personality, style, and empathy with contestants.

Cohen approached dressing for hosting differently than he had approached it as a contestant. As a player, Cohen pretty much wore what he wanted. This time around, he worked with Jeopardy!’s wardrobe department.

“I brought basically every suit and shirt and tie and handkerchief and boutonniere I had and we picked what was in play. And the Jeopardy! wardrobe person bought some stuff, and he made some outfits. He certainly pushed me in a few ways that I don’t normally dress — I don’t wear a lot of patterned shirts.

“The folks over there agreed with me, the situation doesn’t call for a pink jacket. It’s a gray suit, but maybe with a vintage tie. I was really happy with how the looks came out — my personality was still there but in the role of the host.”

Cohen told me he doesn’t draw on a single source for inspiration, and shops broadly.

He hasn’t needed to buy a new suit in a while — his dad made him a bunch just before he retired, and Cohen hasn’t even worn all of them yet. He tends toward Jack Victor and Canali for off-the-rack suits and sport coats — the latter he wears somewhat sparingly, preferring suits.

For accessories, Cohen said he likes to shop at vintage stores, and name-checked Paper Moon. He has a group of friends who are also interested in clothing, and they’ll share finds and occasionally pick up accessories for each other. Cohen seeks out independent men’s specialty stores with approaches like his father’s. “I go to those places because I get it, I know how they operate.” In Los Angeles, he recommends Carroll Custom, the descendant of the legendary Carroll and Co.

For the future, whether it’s as the new host of Jeopardy! or not, Cohen has some wild ideas for his wardrobe.  He’s considering ordering a double-breasted suit and has jacquard fabrics and frog-type closures on his inspiration board. He recently found a gold and black vintage smoking jacket after seeing something similar on a red carpet.

No one can replace Alex Trebek. The new Jeopardy! host will have to carve their own niche. Cohen’s panache and hosting style would likely mark a shift in tone, of which clothing would only be a small component (Alex Trebek, after all, wore a lot of suits, and wore them well). But in addition to his manner in running the show, Cohen’s taste, confidence, and knowledge of tailoring traditions would be fun to see every night at 7:00 or 7:30.