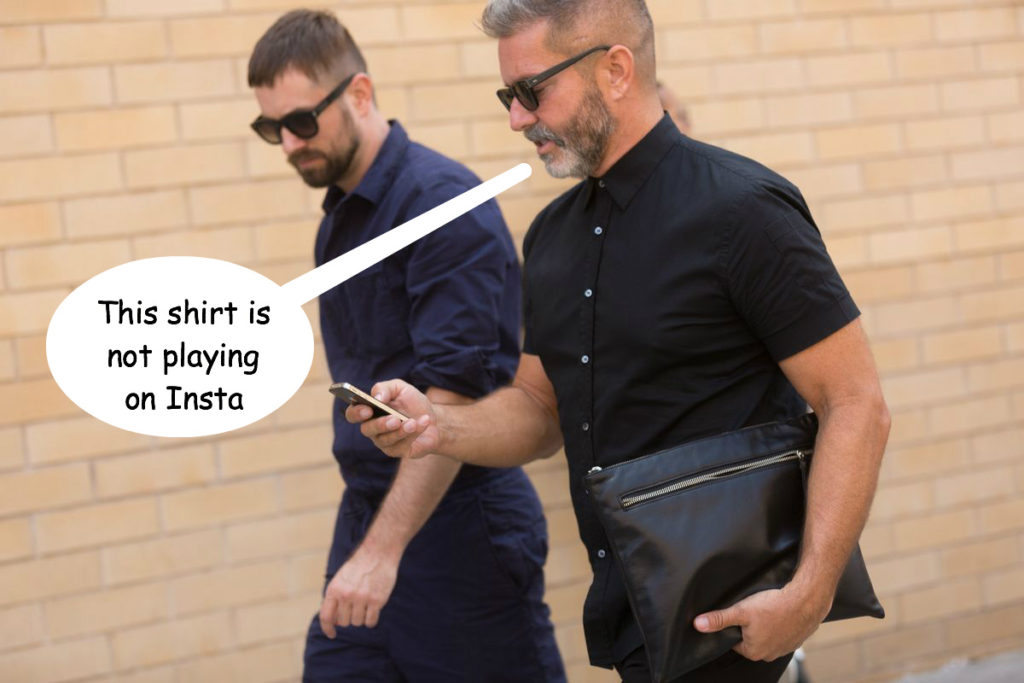 Jacob Gallagher in The Wall Street Journal this week describes how social media — specifically Instagram — may be driving the trend of brighter, louder clothing. The causes? On a small screen, eye-catching clothing attracts the eyes of shoppers. And guys want to wear visually amplified pieces to get attention for their own profiles.

What will cut through the noise on a phone’s browser window, so much smaller than a magazine spread or billboard? Clothing that’s bold, colorful, clicky—which is to say shamelessly distracting. The result? Men’s fashion is getting louder….

Then there’s the hope that the more clickily over-the-top your clothing is, the more successful your selfies will be on social media. Some fashion-obsessed guys are painstakingly curating their outfits based on the loud pieces they scout on Instagram, hoping that when they purchase these pieces they’ll get as many likes as the brand did.

There’s little question that mass-marketed menswear has gotten bolder and brighter in recent years. Although peacock-y tailoring seems to be on the downswing, everyday clothing seems more maximalist than it has been since the 1970s, from luxury and design houses like Gucci down to mall-available streetwear. (Even J. Crew men’s has a lot of bold prints.)  (A counterpoint to this trend is the continued relevance of designers like Christophe Lemaire, defined more by volume and proportion than pattern and color.) But is social media driving it? And how soon comes the backlash?

Whether social media is a major driver depends a lot on social media demographics. It SEEMS like everyone is on Instagram, but is everyone really on Instagram? And is anyone buying stuff they see advertised, either overtly or via oh-so-subtle influencer accounts, on Instagram? At least 77 million Americans use it (latest stats I could find are from 2017), although it’s likely a lot more women than men. And some sales statistics claim 30% of users have bought something they saw first on Instagram.

How Influenced Are We?

Doing some soul searching, for me, Instagram is the app I’m most likely to swipe through aimlessly when I’m not actually engaged in — I guess — life, which is, let’s be honest, a lot. How much have I been #influenced? I don’t think of myself as a guy particularly susceptible to Insta-impulse-buys, and I can’t think of something I’ve bought in the way the guys in Gallagher’s piece bought things they saw on the app (granted, I’m older than them and not really in the market for pastel kicks or yellow hoodies).

But I allow for the possibility that Instagram and other media may be, more subtly, over time, shaping our tastes. Not necessarily for the worse, either. Phonescreen ads have largely replaced full-page glossy ads, and I can’t remember the last time I paged through a mail-order-type catalog (you can stop sending those anytime, guys). An argument can be made that a handheld screen can’t communicate subtlety in cut, color, and pattern of clothing that a print ad or editorial could.

On the other hand, though, I spend a LOT more time looking at images where the style is at least part of the message than I ever could have in the heyday of newsstand men’s fashion magazines. Anyone with a smartphone has near instant access to archival images, editorial images, and images of items for sale. Years ago, I had to make time to buy and read a magazine or do some shopping; now I can do it on the subway. Maybe we’re better than ever at being discerning about style in images. I feel that way, although my argument is occasionally undercut by my own Instagram feed. 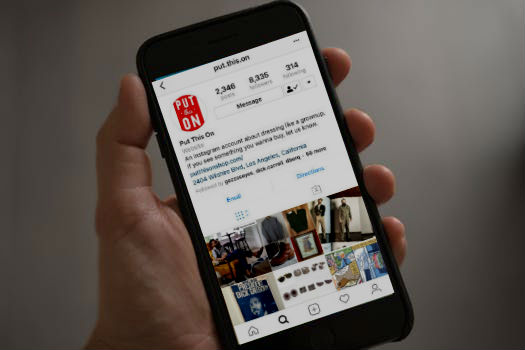