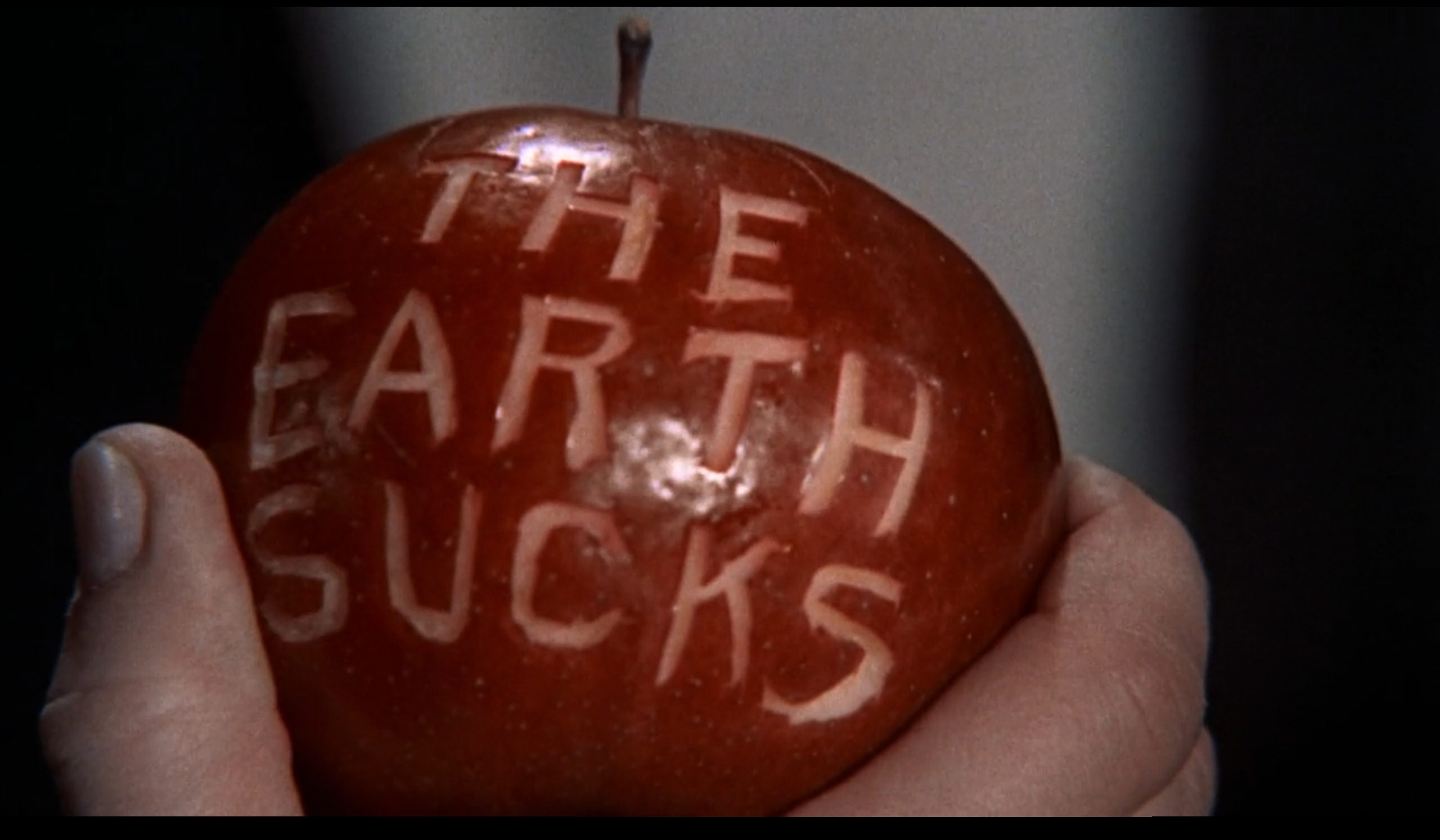 Does that hand look heavy?

What we call Ivy style — trim but natural shouldered tailoring, no-break flat-front khakis, OCBDs, shetland sweaters, loafers, etc. — casts a long shadow over modern menswear, but the heyday of the style was not that long. The bible of the look, Take Ivy, came out in 1965. Just a few years later, that version of Ivy style would fade, at least on the campuses where it began. Take Ivy photographer Teruyoshi Hayashida once told The Trad that when he went back for more photos, he was uninspired.

Ivy really changed on account of the Vietnam War. The change was quite severe. When I went back after the first trip, I was very surprised… During Vietnam there were hippies everywhere and even though there were a small number of people in traditional dress — things had really changed. 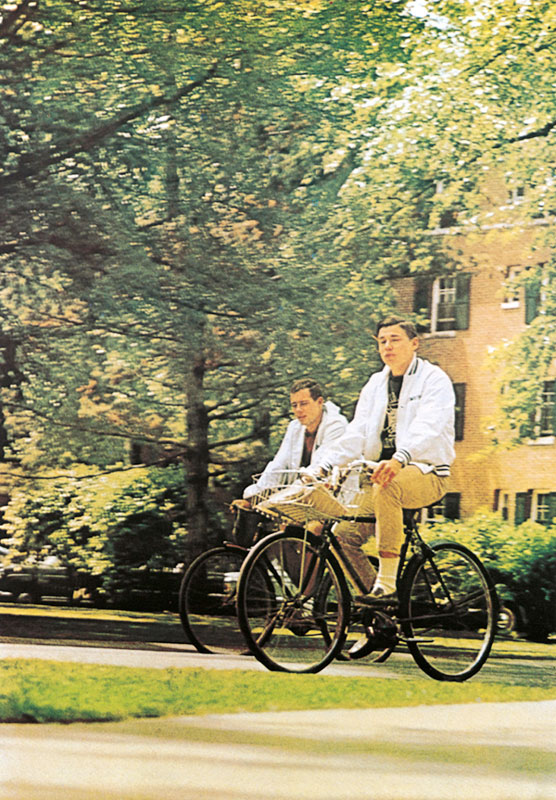 At that point more Ivy campuses were coed — Princeton and Yale admitted women in 1969, Dartmouth a few years later. And dress quickly shifted toward casual. Most of us discovered Take Ivy in 2008 after A Continuous Lean posted scans of its pages. Consider the timeframe between 2008 and now — same distance between 1965 and 1977. A relative cultural eternity.

Take Ivy communicates through still photos of students on Ivy league university campuses in their everyday clothes. The authors at the time got permission from the colleges, but not from individual students; in that sense, Take Ivy showed pretty authentic style in a narrow, exclusive setting. One of the great things about a photos in TI is that we don’t have to hear from the students themselves — there’s no self-deprecating or -mythologizing Instagram caption to potentially spoil our moment of discovery. We can take what we want, inspiration-wise, and not think too hard about the reasons those men were there, dressing as they did, with few women or nonwhite men in the picture, literally.

Unfortunately, other sources from the period that provide some nice campus visuals aren’t as quiet. Getting Straight, a 1970 comedy/drama starring Elliot Gould as a grad student, sets the sort of campus style Hayashida found uninteresting on a Brutalist-architecture campus during a period of student unrest, with no ivy in sight. Gould’s character, Harry Bailey, is 6 years out of undergrad, and back from serving in Vietnam, now eager to earn his master’s degree so he can teach high school. He struggles to finish his work, pay his rent, and deal with fellow students who expect him to support their demands for, among other things, more involvement in campus governance and a black studies program. 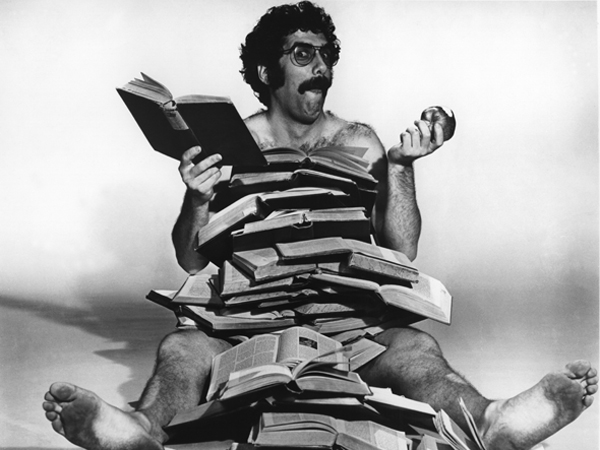 Who wouldn’t see a movie with this promo photo? Elliott Gould wash your feet.

Quentin Tarantino called Getting Straight his favorite of a slew of counterculture-themed movies from this period, including the Strawberry Statement and Zabriskie Point. For viewers maybe less inclined than QT to enjoy blunt exploitation films, Getting Straight can be a bit of a tough watch. Gould is explosive and funny, and he gets the best lines, mostly in a fiery argument with a crusty old dean. 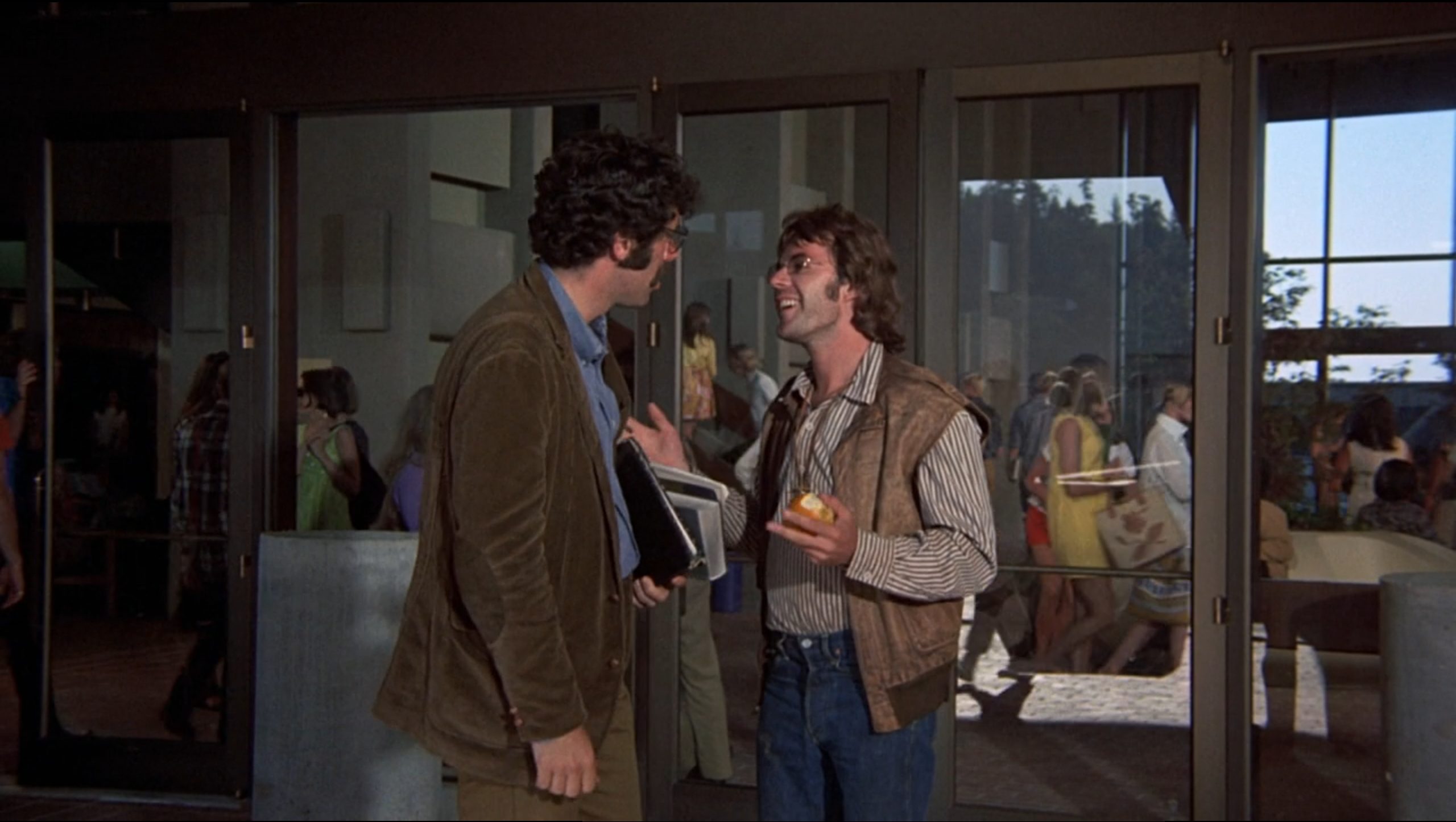 Chambray button down and an elbow patch cord jacket. 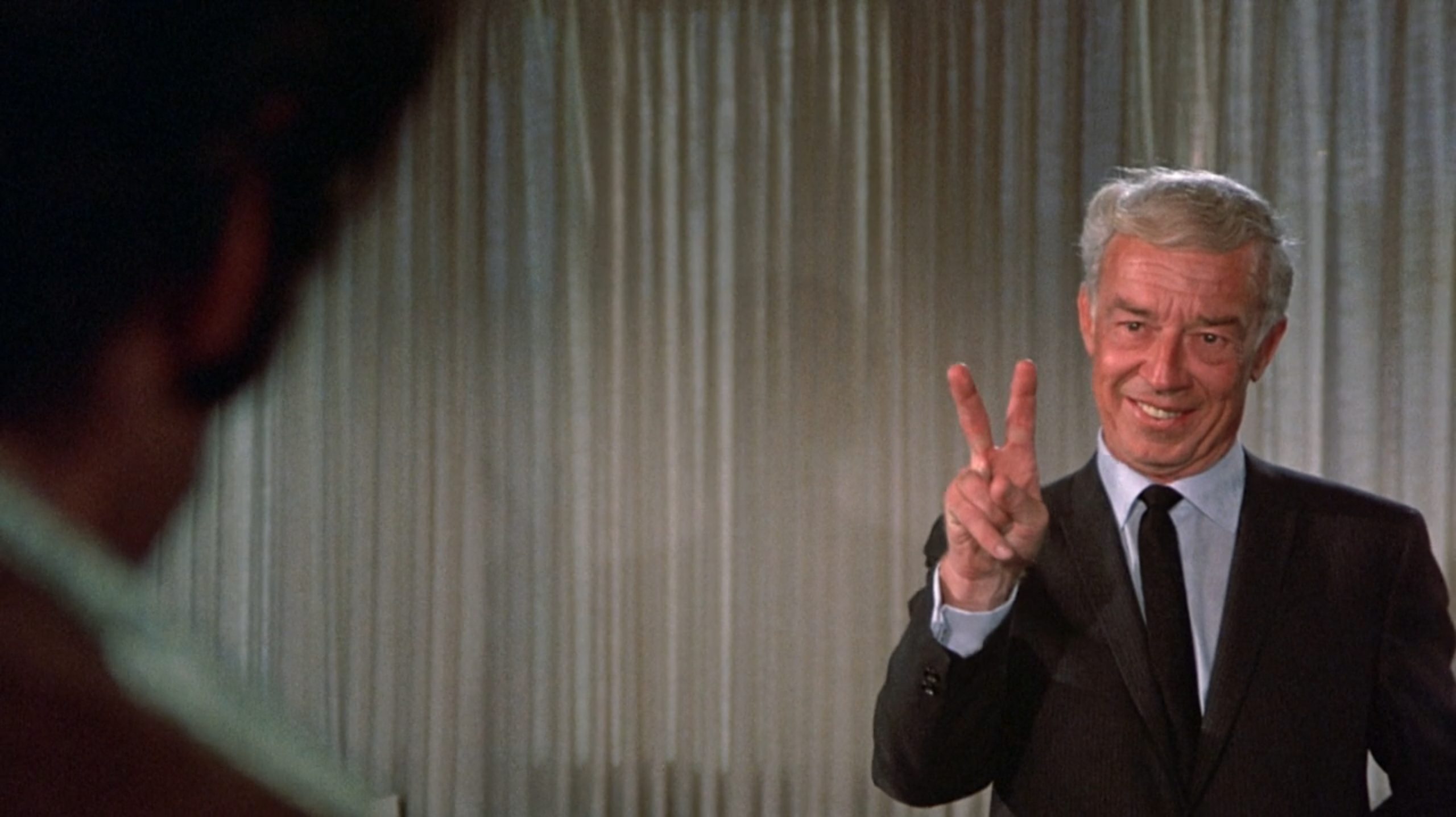 Sober tones and cuts for the university administration. Not cool, man.

But it’s hard to judge how much of Harry’s anti-hero behavior is supposed to be about the war- and protest-hardened cynicism and anger and how much he’s just supposed to be a tell-it-like-it-is charmer — Harry’s many cringe-y anti-gay and racist jokes don’t seem to reflect poorly on him in context, but they’re record scratch moments to a 2020 viewer. The film also dedicates a lot of its 2 hours to Harry being a total asshole to his on-again-off-again girlfriend, played by Candice Bergen, who forgives him again and again for no apparent reason. When he’s not insulting her in public or making up with her, he’s flirting with every woman he sees, including his students and a campus tour group of high schoolers. 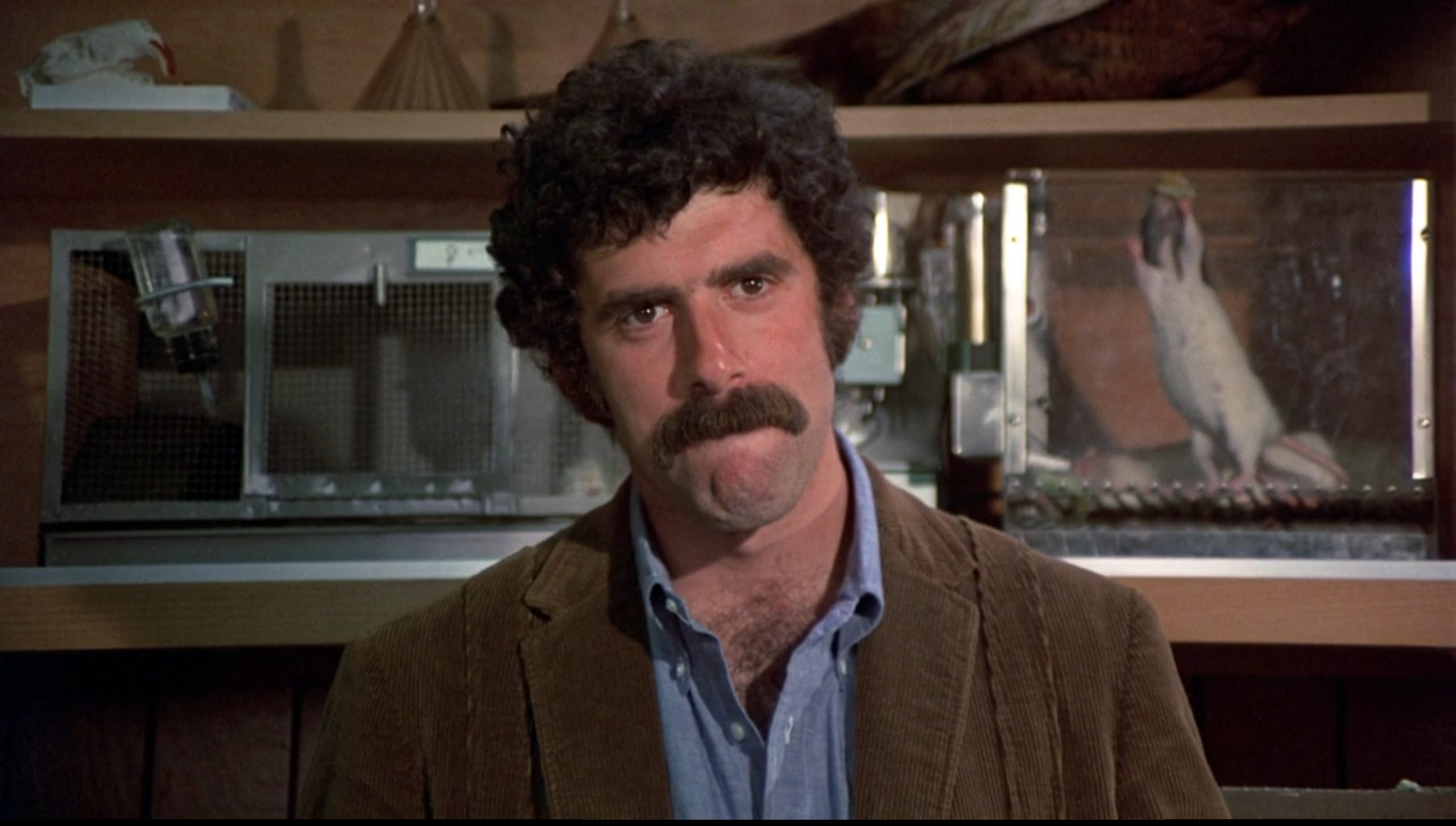 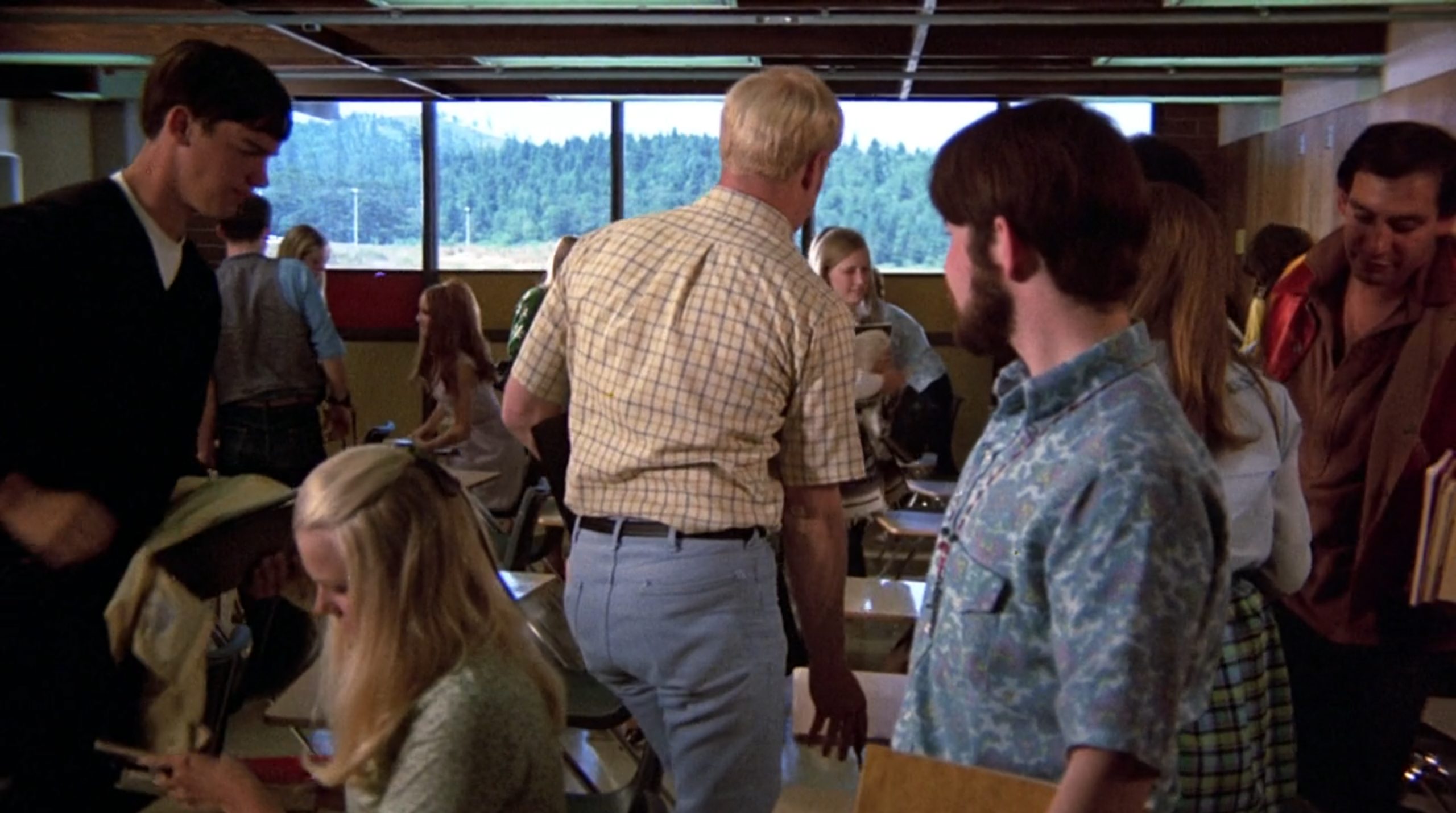 As regrettable as Harry is as a character, the style inspiration comes mostly from him, although the rabble around campus, including a young Harrison Ford, provides some interesting style notes. Harry gets tremendous mileage out of a slightly Norfolk-y 3-roll-2 corduroy jacket. He wears it primarily with some tan 5-pocket pants and beat-up roper boots, and a chambray-ish, flap-pocket shirt with a button-down collar (including a third collar button — I’m probably reading too much into it but maybe intended to be a holdover from his undergrad days, which would have been in the early to mid-60s). He also wears what looks to me like a simple military watch on an olive strap, maybe a nod to his time in the service. 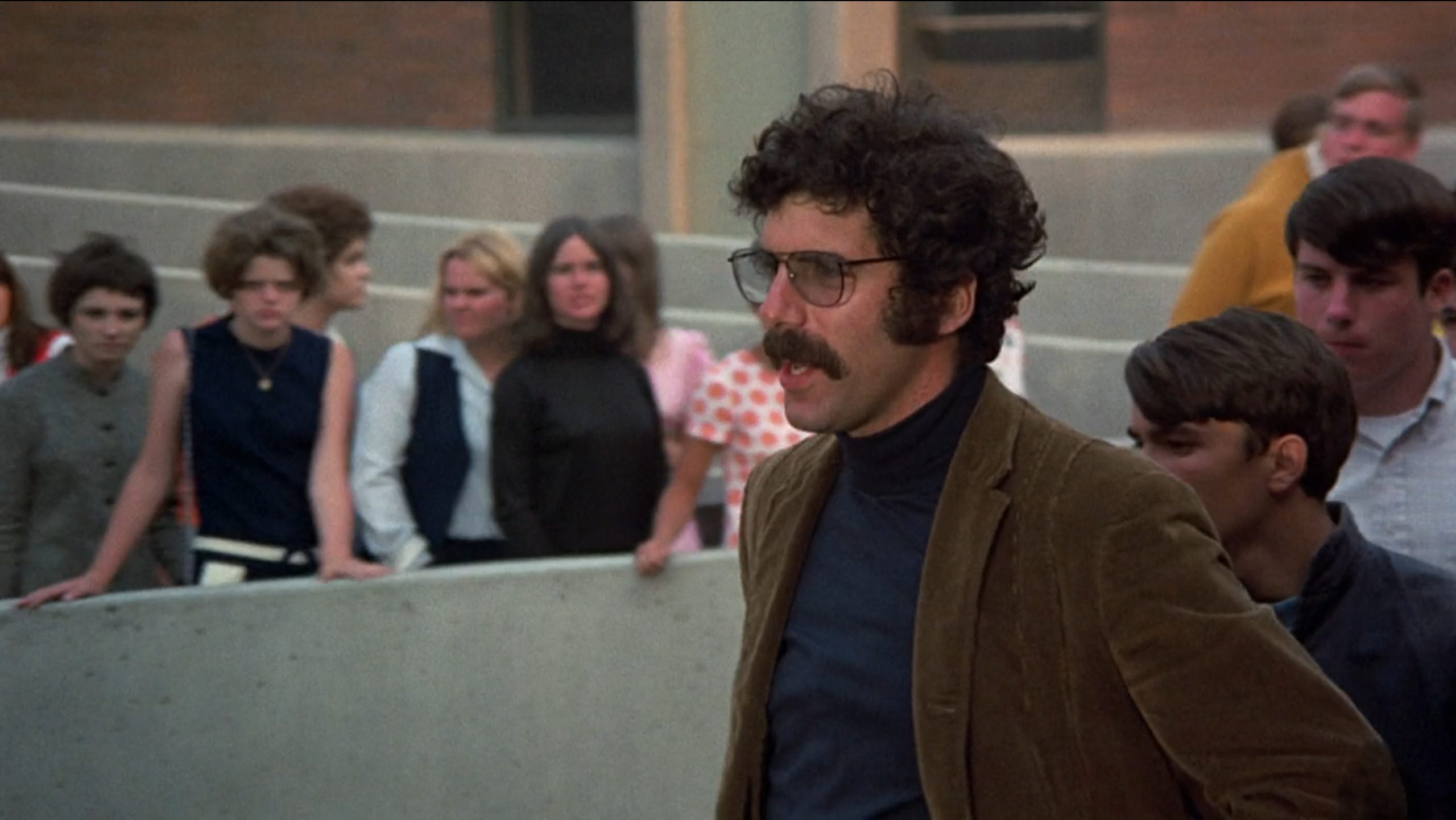 Harry throws the cord blazer over a turtleneck, a striped t-shirt, and a wonderfully ugly open collar foulard popover; even a university stripe OCBD, an Ivy classic that seems a little less staid under Gould’s wild curly hair and prodigious stache. He really nails the cool English teacher look, and in the scenes where he’s teaching grammar to undergrads, he walks the walk, even comparing comic books to real literature! Woah! 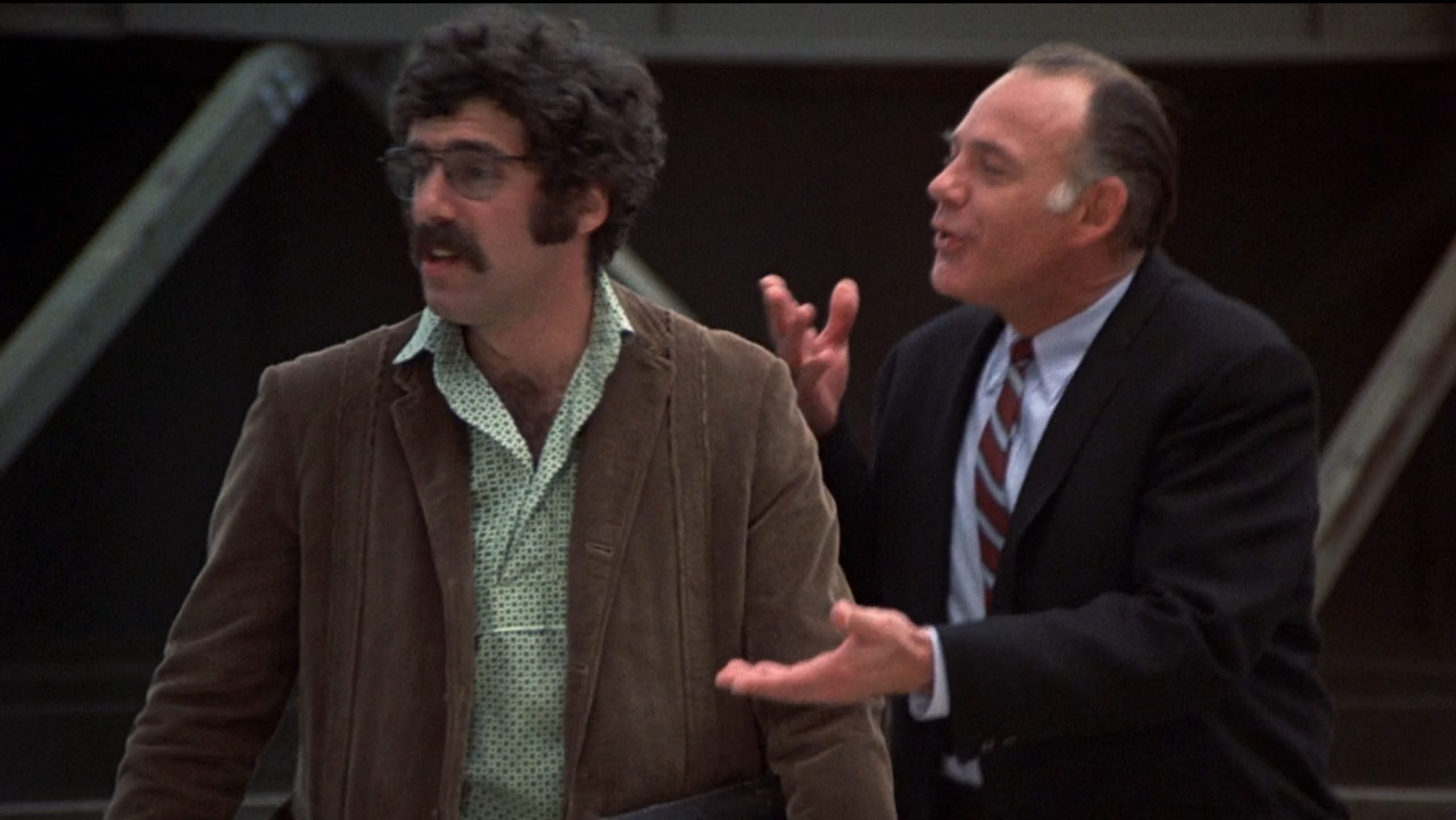 The hippie costumes in the movie seem a little more ham-handed, like the costuming on a Dragnet episode — small rectangular eyeglasses, puffy shirts, and vests. Which makes sense, considering costume designer Gene Ashman worked on The Monkees TV show in the late 60s. 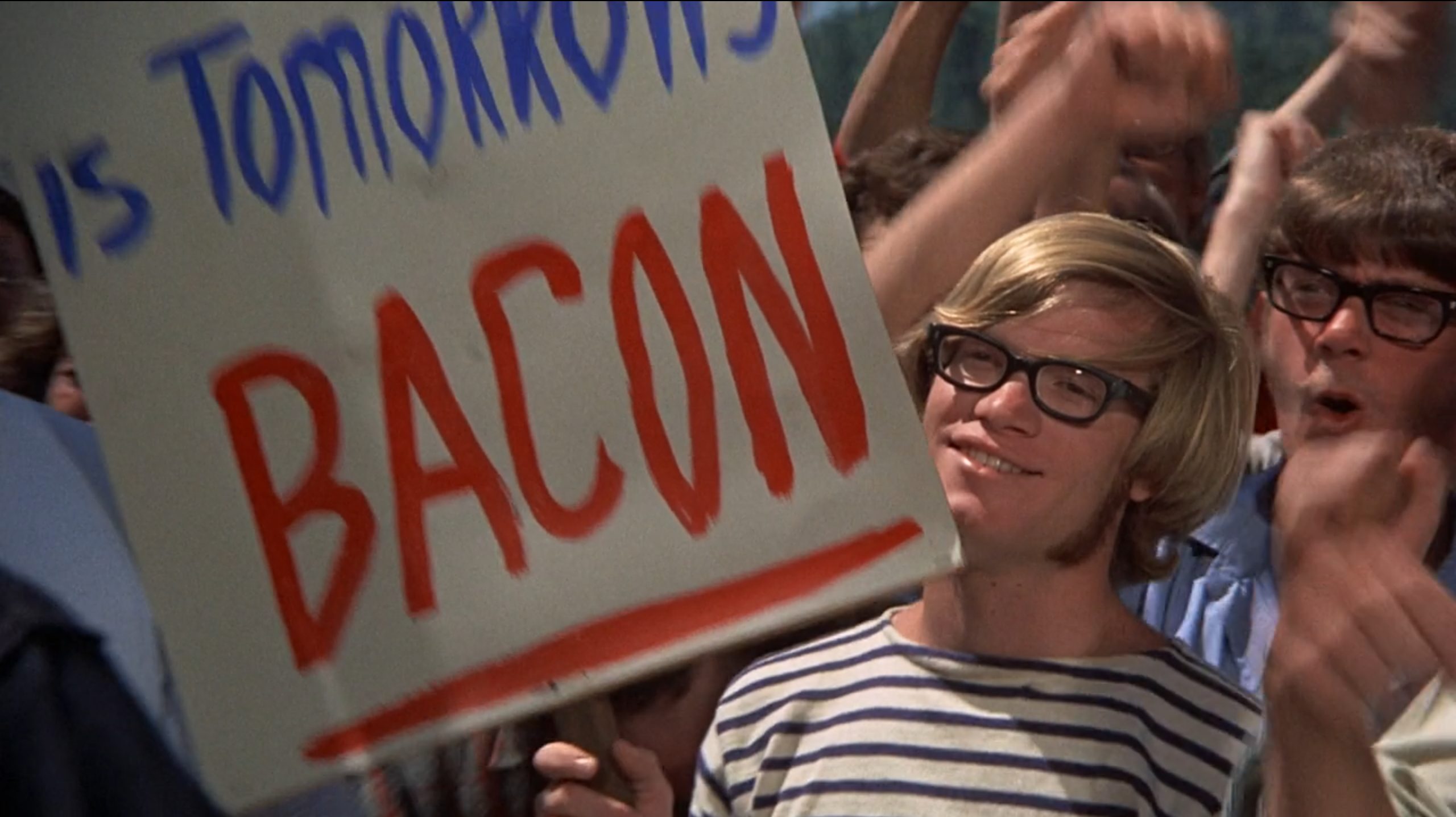 Harry’s style, which reminds me a little bit of modern RRL or recent stuff from Wythe New York, contrasts against his university’s faculty and administration (i.e., the squares), shown in trim navy and gray tailoring, mostly, with striped or knit ties and a button-down or stiff semi-spread collars.  The ties are cinched in tight four in hands, vs Harry’s sloppy knots looking like soggy cannolis.

The struggle in the movie is Harry reconciling his politics — he claims to have been at student protests at Berkeley and the Sorbonne as well as in Selma for civil rights marches — with his desire to work within the system: get a degree and a teaching job, pay the rent, etc. When he’s hired by the university and later asked to mediate between the administration and students, you can see in his choice of clothing that he represents a middle ground. Not as casual as the students, in t-shirts and jeans, nor as buttoned-up as his boss, in a crisp white french cuffed shirt. (Everyone’s hair is terrible — weird times for barbers.) 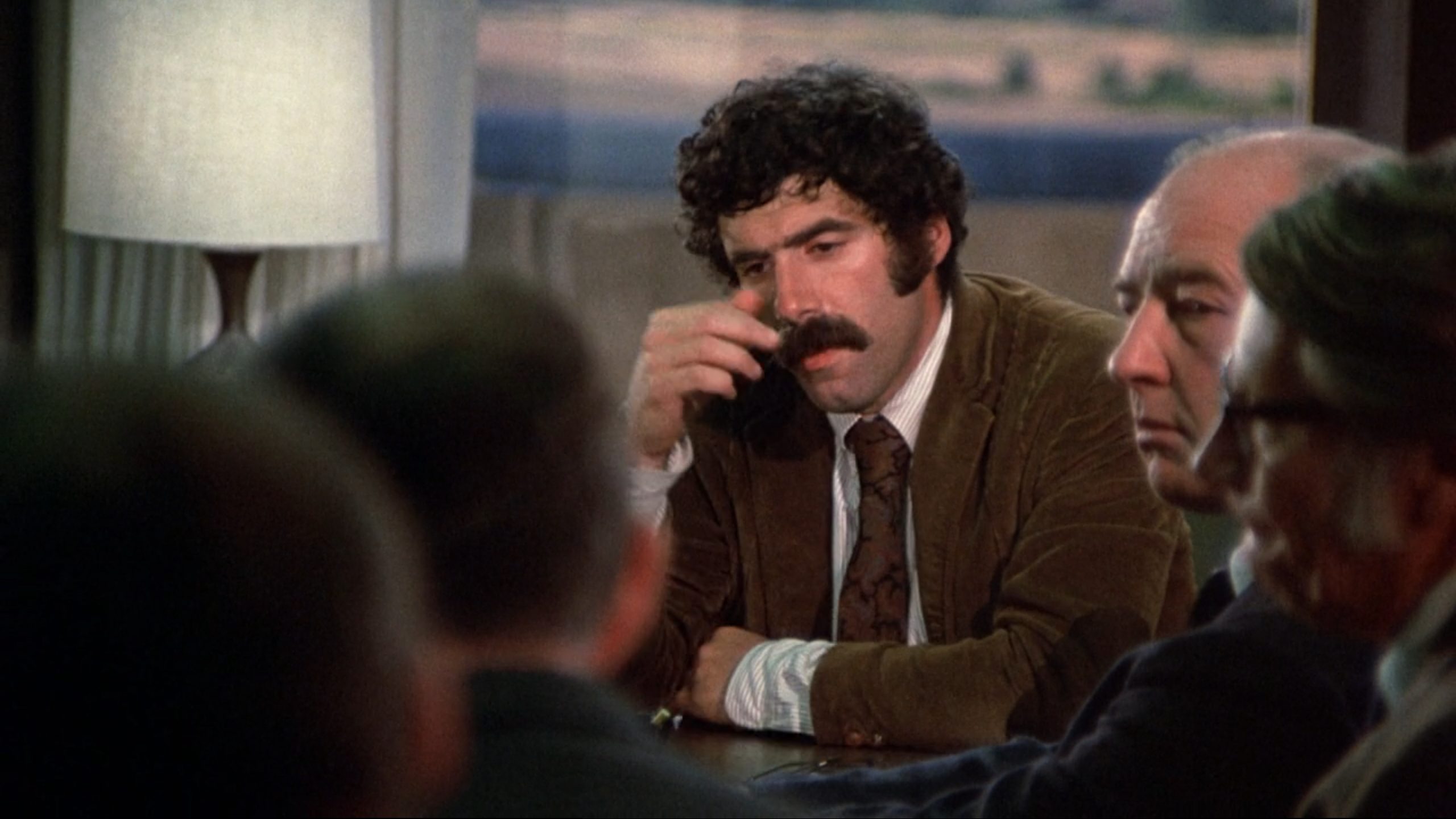 Can he defend his thesis, or his tie knot?

Getting Straight is about as subtle as a paisley shirt. It’s a protest placard pun of a movie, with a distracting amount of casual misogyny that doesn’t seem to serve a purpose other than making Candice Bergen cry. Two thumbs down for Getting Straight, two thumbs forever up for dressing like 70s Elliott Gould.

If you’d like to bite Getting Straight style, some options: 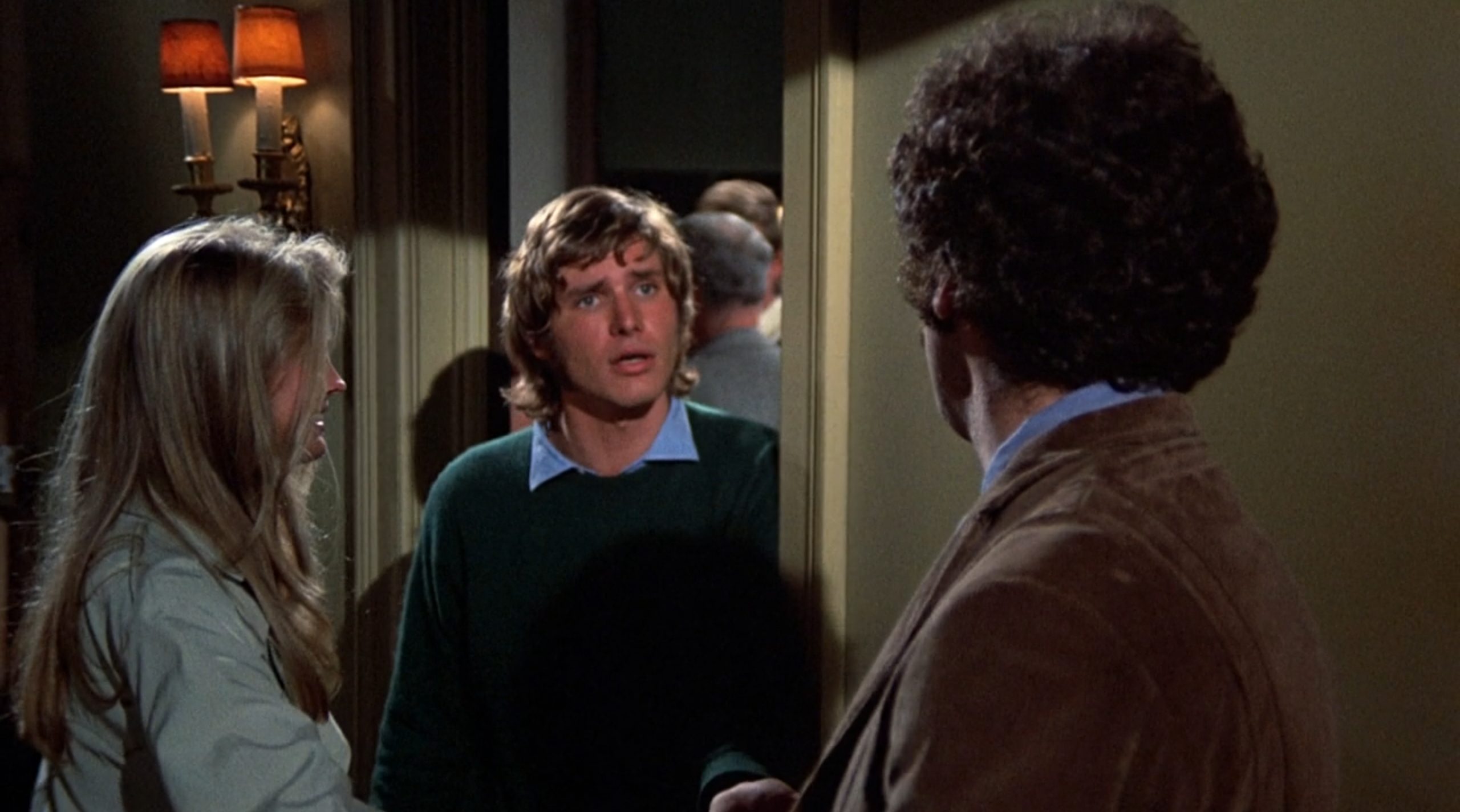 “It’s the ship that made the Kessel Run in less than twelve parsecs!”