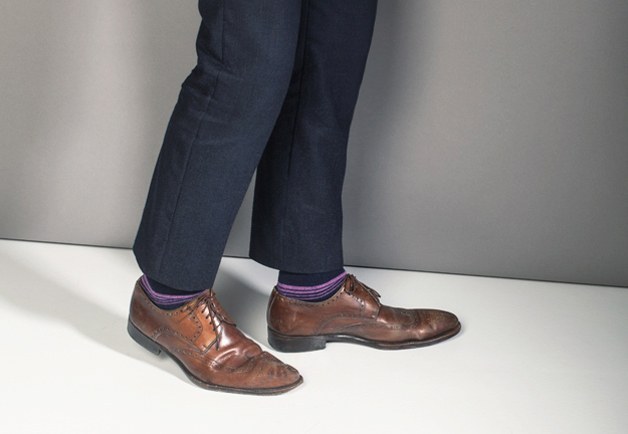 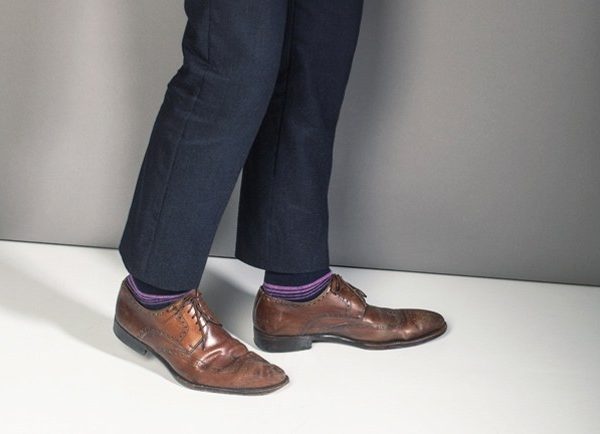 The above photo (subject redacted) represents one of my pet peeves in the no-break-pants age. I don’t mind a short trouser, but when you start hemming your trousers to no break or highwater levels, the hem at the back of the leg is often left flapping in the breeze. It just hangs out there, like it’s got nothing better to do.

One solution is to hem your trousers on a slant, so the front is higher than the back. The technique is also known as a military hem or guardsmen’s hem, although military tailors have other tricks beyond slanting the hem to get the right, extremely clean effect on uniform trousers.

Hemming your trousers with a slight slant allows the front crease to rest at the top of your shoes and the rear crease to end lower on the heel, so it’s not oddly jutting off at the ankle. The effect generally looks quite natural; it won’t look slanted when worn. (There’s also a mod tradition of a stepped hem, where the hem is clearly uneven at the seam, and sometimes even embellished, to allow for a specific trouser break.)

Many alterations tailors will give your trousers a slight slant already, without telling you, but you should be specific if you know you want one. It’s a pretty straightforward alteration for plain hems–it can be a challenge for cuffs. Rather than cut the cuff at an angle (like a ticket pocket), which would be a little ridiculous, some tailors recommend cutting it straight, then adding a small dart to the front leg of the trouser behind the cuff to give the front a little lift. Although I’m a firm believer in DIY and have hemmed my own pants in the past, I’ll leave that one to the pros.