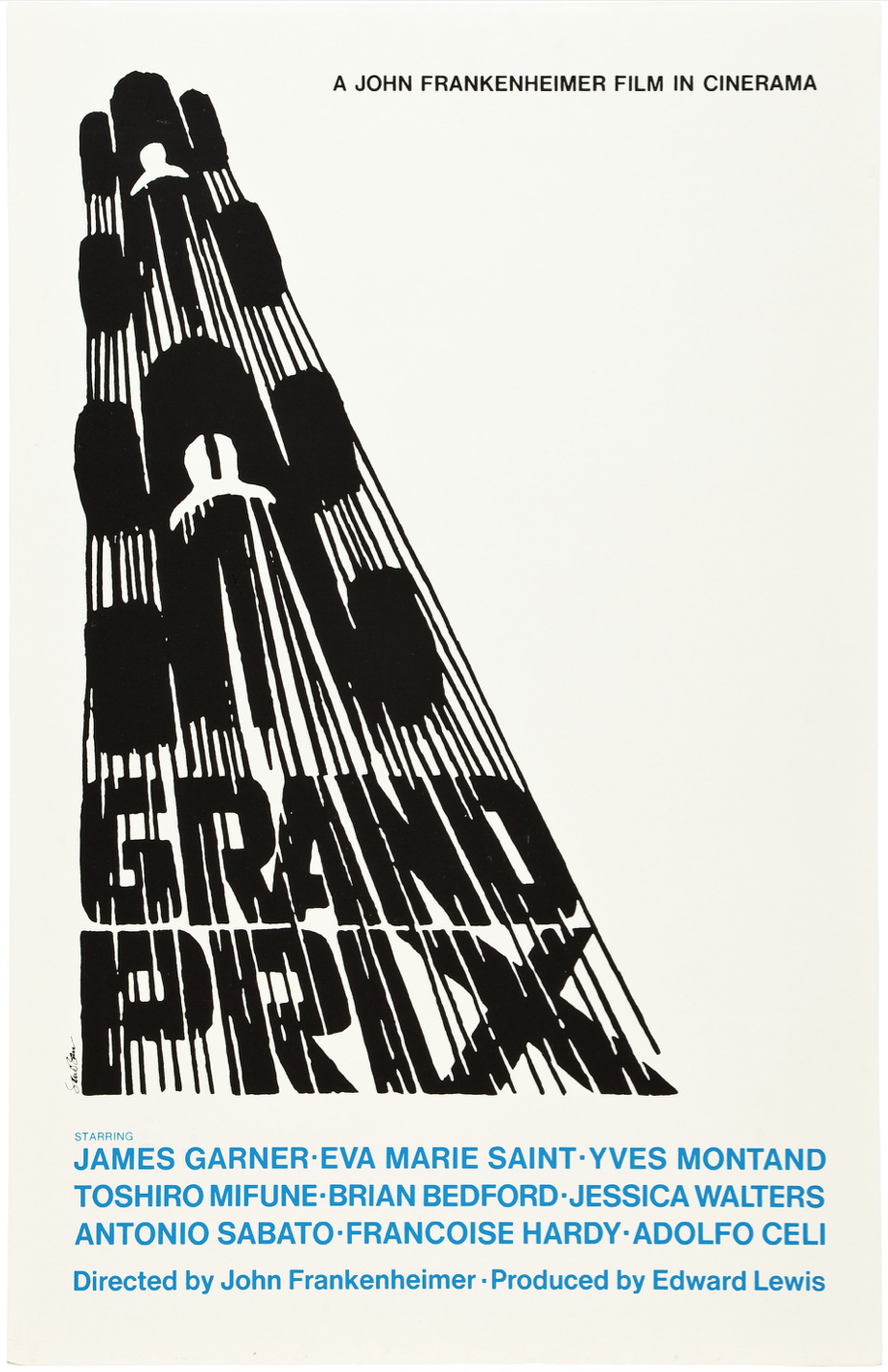 The plot of Grand Prix is not the point of this post, and frankly wasn’t the point of the movie. The 1966 John Frankenheimer-directed film follows four Formula 1 race car drivers through a season, and the narrative centers on their relationships with their sponsors and their wives and girlfriends (sometimes the same people). Early in the film — which runs 3 hours — American driver Pete Aron (played by James Garner) joins a new racing team, Yamura (a stand-in for Honda). As Aron negotiates with Yamura’s founder, Izo Yamura (played by Toshiro Mifune), Yamura relates an experience with Americans.

Yamura: Right after the war, my house in Tokyo was used by an American general and his family. When it was returned to me, it had flowered wallpaper, three new bathrooms and four new closets. Americans, I think, are over-devoted to bathrooms and closets.
Aron: Well, we accumulate things.
Yamura: And then you lock them away in closets.

Aron is trying to reclaim racing glory after causing an accident that nearly killed his teammate in Monaco. The initial scenes of the Monaco race are edge-of-your seat stuff, even for a non-racing-fan like me. Engine revs, rather than orchestral strings, score the race footage, giving it a documentary feel. Frankenheimer used car-mounted cameras and helicopters to capture the street-level adrenaline of racing through an old European city. In the era of Go-Pros and drones, it’s easy to take some of these shots for granted, but I can imagine the excitement of getting a driver’s eye view of Monaco at high speed in 1966. 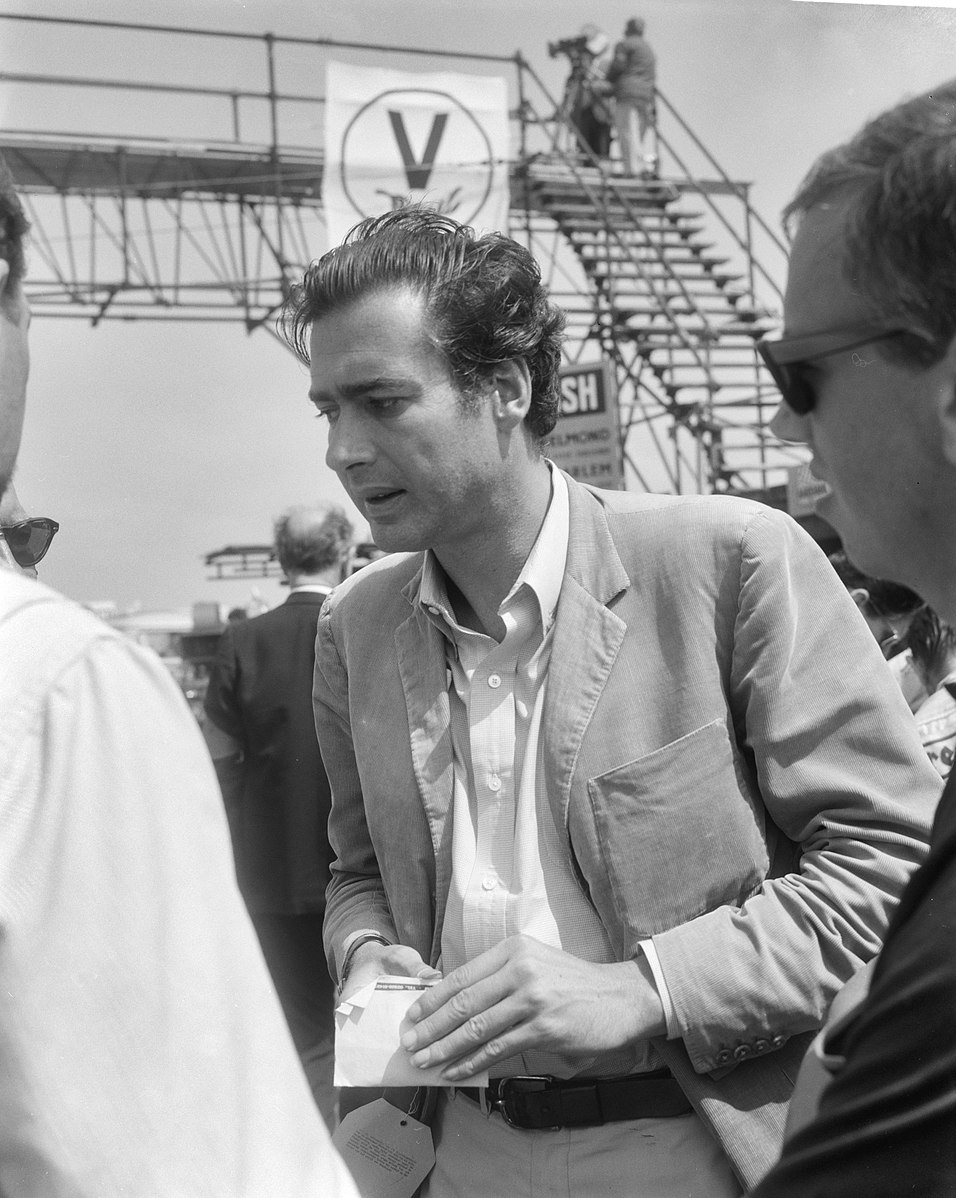 John Frankenheimer on the set of Grand Prix, looking casual in a patch pocket jacket and open button-down collar.

The racing scenes make up much of the movie, as Aron, his British teammate Scott Stoddard, an older Ferrari driver, J.P. Sarti (played by Yves Montand), and his younger teammate Nino (Antonio Sabato, Sr.) compete for the F1 championship on a number of courses, zipping around in cars that look like kazoos on wheels. The movie isn’t boring, but it’s pretty plainly a lot of style over substance — beautiful people (including the drivers,  plus Jessica Walter, Eva Marie Saint, and Francoise Hardy) doing exciting things in Europe, shot in Cinerama, which was meant to be shown on a wide, curving theater screen. That may not make for critical acclaim, but in 2020, it’s 3 hours of photogenic, relatively low-stakes escape, and in beautiful clothing, nonetheless. (It’s currently available on the Criterion channel.)

When not in a racing jumpsuit, Garner’s American driver wears mostly Ivy-adjacent tailoring. Button-down collars, soft-shouldered, three-roll-two jackets, swelled edges on the lapels, and in some cases two buttons on the sleeve, Brooks-style. His trousers are pretty mod; narrow and tailored to no break. Casually, he wears finer-gauge vneck sweaters and a sporty khaki windbreaker with a cape back. During a brief stint as a broadcaster, he even makes a network-crested jacket look pretty good. The collars are a little small, but still clearly differentiated from the Europeans’ stiffer point collars.

As Yamura, a character broadly modeled on Honda chairman Soichiro Honda, Mifune gets only a few scenes. Yamura is looking for Aron to give the company a Grand Prix win and with it, legitimacy in the Euro-centric racing world. Yamura initially wears a conservative, full-shouldered fine-stripe navy suit, crisp white shirt, and narrow red ties and tie pin (with a white, tv-fold linen square).  Later he wears a pretty rad 3-button tan jacket with patch pockets, with a neat print tie.

Yves Montand’s Ferrari-driving J.P. Sarti is the jaded, 40-plus veteran in the crew, telling Eva Marie Saint’s American journalist character early on, “There is no terrible way to win. There is only winning.” Tall and elegant, he wears solid-looking jackets and nearly sheer white shirts — I particularly like the striped suit below with the textured silk black tie, and the flap chest pocket on the brown jacket worn with gray trousers. Without a jacket, Sarti prefers a throughly unbuttoned shirt.

Adolfo Celi — fresh off Thunderball — plays Ferrari’s owner, loosely modeled on Enzo Ferrari, who himself agreed to feature Ferrari cars in the film after seeing some of Frankenheimer’s initial footage. A boxy guy to begin with, Celi wears more structured suits in navy and gray, and never smiles.

I’d put Grand Prix just below the pantheon of 60s films with relatable, inspiring style — not quite Bullitt or a Bond film, but with as much to admire and imitate than arguably more stylish films overall, like Purple Noon, Blow-Up, or Breathless.

Shout out to Tim / The Fox Tooth for giving me the heads up on Grand Prix.