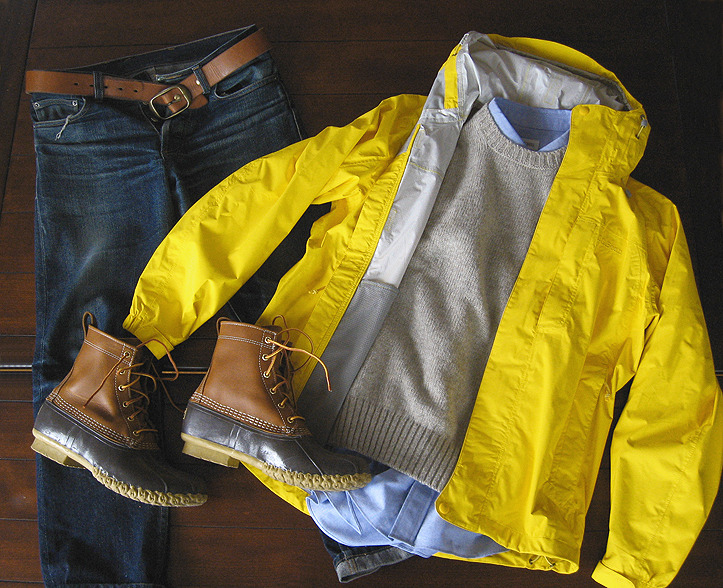 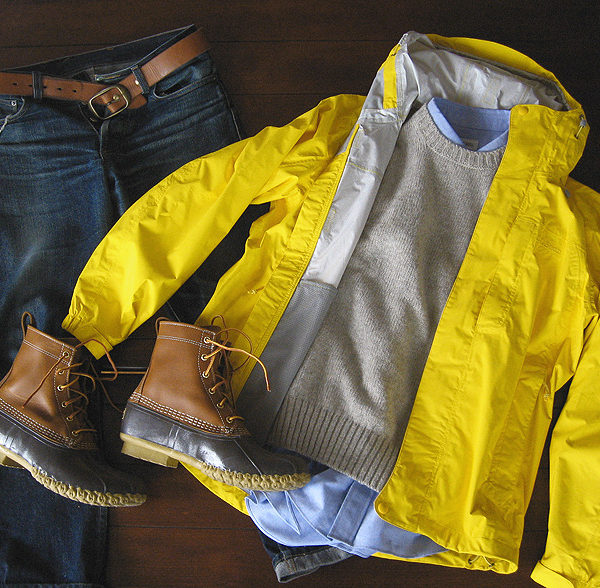 Outerwear tends to be expensive, but it doesn’t have to be. Depending on your budget, you can get relatively affordable coats and jackets nowadays from Club Monaco, J. Crew, Brooks Brothers, and Ralph Lauren. At the end of every season, they’ll have nice looking designs for about $150-200 (Brooks Brothers and Ralph Lauren have really good mid-season sales as well). More affordably, there’s Pointer’s chore coat for $87. It looks pretty good if you like workwear.

For rainy days, I sometimes wear LL Bean’s Trail Model Rain Jacket with jeans, a Shetland sweater, and some LL Bean boots. The shell is made from a waterproof rip stop nylon and the interior seams are taped. The pocket bags are also made of mesh, so that if you store away any wet things, they’ll dry quicker. The best part? It’s $79. Possibly $71 if you wait for one of LL Bean’s occasional 10% off coupons. Additionally, they have a similar jacket this season under their “Signature” line. Although I haven’t handled it, the jacket looks like it comes without a chest logo (which the mainline does, unfortunately, although it’s tonal). I also assume it fits slimmer all around.

In the photo above, I’ve paired my LL Bean rain jacket with an oxford cloth button down shirt from Ascot Chang, a Shetland sweater from O’Connell’s, and a pair of straight legged jeans from 3sixteen. All of these tend to be a bit on the pricey side, but you can find more affordable alternatives at a number of places. Brooks Brothers will have oxford cloth button downs for about $50 during sale season, while Kamakura sells them for about $79 year round. More affordable Shetlands can be had for about $75-100 at Brooks Brothers and LL Bean when they’re on discount (although they don’t always carry them). Lastly, raw selvedge denim jeans can be had for about $89 from our advertiser Gustin, or $82 from Unbranded. Both get regularly recommended in the denim community.

Together, these pieces make for a reasonably classic look, and more importantly, can be had for not too much money.