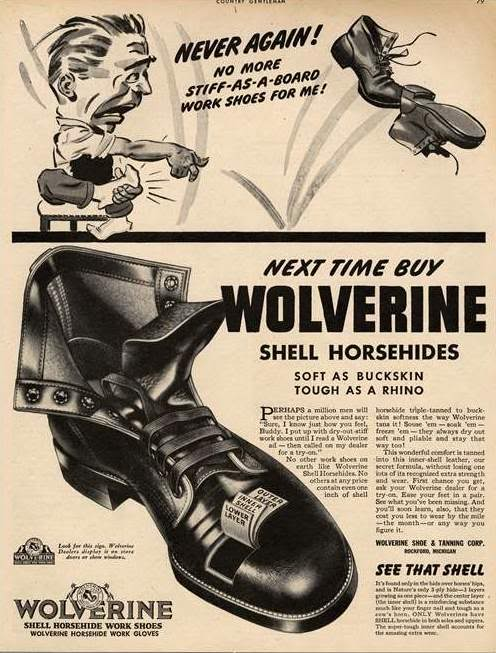 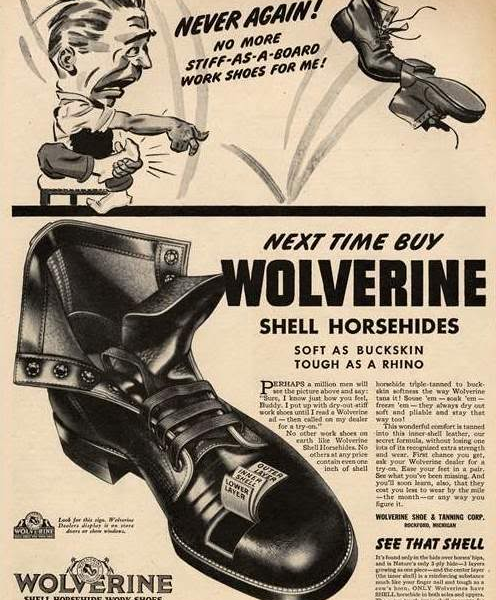 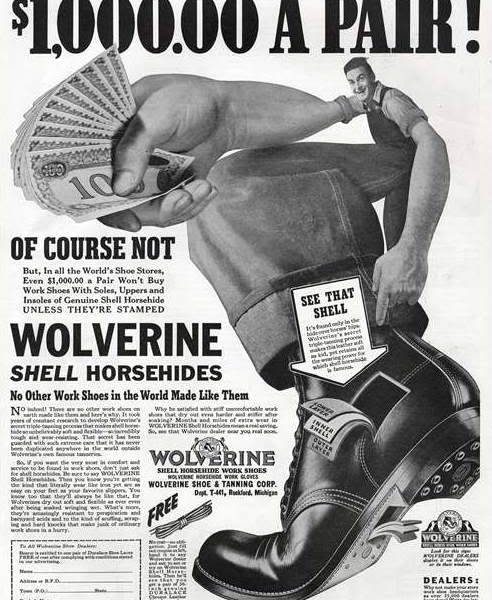 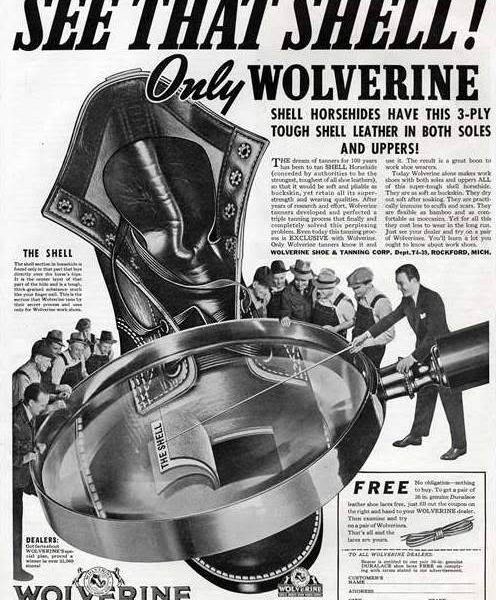 Shell cordovan is sometimes thought of as a “dressy leather,” presumably because of how expensive it is, but it’s actually something historically considered to be quite casual. Indigo Shrimp has some neat advertisements from the shoe company Wolverine, originally printed in 1910, showing one of shell cordovan’s original applications as a workboot material.

Shell cordovan, as many readers will know, refers to leather drawn from the rears of horses. The word cordovan comes from the city of Cordoba in Spain, which was once renowned for its prowess in tanning. In the 16th and 17th centuries, skilled workers there would tan horse skins so they could be used to decorate wall hangings, armor, and trunks.

It wasn’t until the mid-19th century that the term “cordovan” began to refer to the shell of horse butts (hence the name “shell cordovan”). Much of shell cordovan production at this time was in Germany, where it was sold under the name “Spigelware,” which translates to “mirror goods.” It’s a name we can safely presume comes from shell cordovan’s natural shiny finish.

In a letter written in 1934, Horween (a famous Chicago tannery) claims that the original German versions of shell cordovan were too thick and stiff to be used for shoes, and that it wasn’t until shell cordovan tanning came to the US (via German and Dutch tanners), did the process become perfected for footwear. Whether that’s just company marketing propaganda, or actual history, it’s hard to say.

In any case, when you see the term “cordovan” nowadays, it’s often just referring to a specific color – something that’s a bit reddish brown, and slightly darker than burgundy. It’s very close to what Horween markets as their “#8.” It’s really only when you see the full term “shell cordovan” that you can trust it’s the thick horse leather that so many people covet. Today, the material is mostly used for the making of casual boots, country shoes, and loafers (particularly the tasseled kind). You’ll occasionally see it in a “dressier” shoe, but the material is really something that should be considered quite casual. And, when you wear it, the rest of your outfit should be equally casual as well. Workwear jackets and work shirts with shell cordovan boots; chinos and Shetland sweaters with shell tassel loafers; or button down shirts and tweed sport coats with almost any kind of shell shoes.