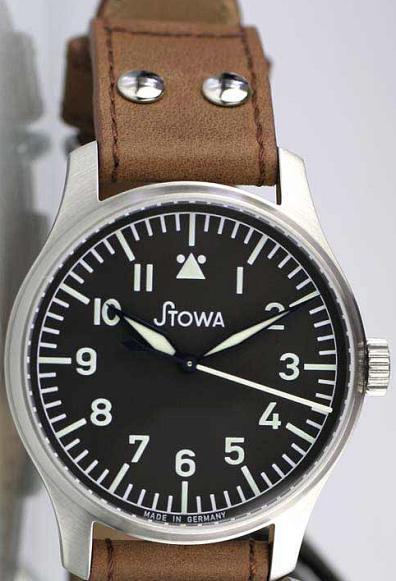 My younger brother John graduated from college this Spring, and I wanted to buy him a gift.  I love the little guy (OK, not so little, he’s 6’4″) a lot, I’m proud of him, and I wanted him to get a gift that he could use for the rest of his life.  The natural idea was a watch.

I’m not made of money (to say the least), but I decided I could spend hundreds of dollars on this special gift.  I’d saved a bit, and my brother’s worth it.  I wanted something he could wear whether he became a successful businessman or, as he’s been thinking about lately, a priest.  I also wanted something he could wear now, which is tricky because he’s only 21 and is a very casual dresser, generally.

I considered buying him something vintage, like a mid-century Omega, or even a 70s Omega sports watch.  Both are beautiful, and can be had for around five hundred bucks, but I wasn’t 100% sure that he would be comfortable wearing either one on a day to day basis.  Finally, I settled on getting him a black-faced pilot’s watch.  I figured that if he went into business, this would be just formal enough to last him until he could afford a more formal watch, and that it was informal enough that he could wear it with a t-shirt and not feel like a goofus, even at 21.

I wanted something authentic, with an automatic movement, and finally settled on the Stowa Flieger (Airman).  Stowa has been in continuous operation in Germany since the 1930s, and the Flieger is based up on the B-Uhr, the mid-century German pilot’s watch.  (This does mean that it was one of the watches worn by German Nazi pilots, but it was and is worn by German pilots of other political affiliations before and since.  Like, say, Volkswagen, it has some Nazi roots, being German and born in the 30s, but it is by no means a Nazi-affiliated product.)  Stowa makes only a few models, all of which have classic roots.

The price of the watch depends in part on the movement – I chose an automatic movement (since it’s an everyday watch), but not the finest movement offered.  Some of the watches are branded, and some not – I chose a piece without branding, which I thought better fit the aesthetic.  The watch I purchased cost about $600, which was just above my original budget, but well below the cost of comparable watches from other brands.  This is because Stowa sells only direct to the consumer these days – a not insignificant part of the cost of a fine watch is retail and branding-cost markup.

Stowa essentially makes the watches to order, with a small staff in Germany.  My brother’s watch took about three months to arrive (they didn’t charge me until it was ready to ship), but the wait was worth it.  I think he’ll be proud to wear this watch, and it will last him a lifetime with proper maintenance.