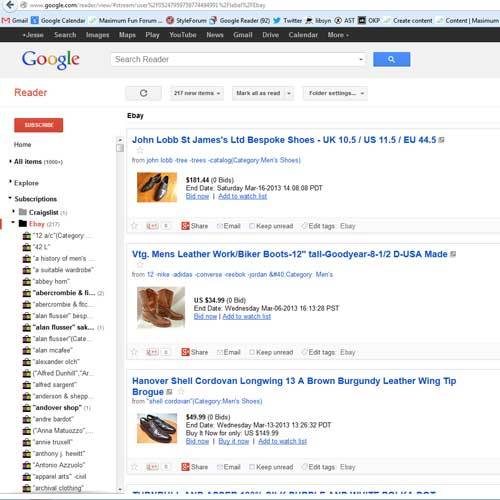 Lately, a lot of folks have been asking me where the auctions in our eBay roundup posts come from. Every week, between two public posts and one members-only Inside Track post, we point you to hundreds of items. So how do we find them?

I use Google Reader to follow RSS feeds – it’s one of the main ways I interact with the web. If you’re not an RSS feed user, I recommend you look into it, as it’s a much more focused way to get the content you want when you want it. Basically, RSS is just a file that lists, chronologically, updates to a website. Usually that means new blog posts or news articles, but it can also mean other stuff. eBay, for example, will allow you to make an RSS feed out of any search so that when something is listed that fits your search parameters, it appears in the feed. Usually a little RSS icon will pop up at the bottom of the search, but you can also use this little trick to create an RSS feed.

I’m subscribed to about 1500 eBay searches. It’s a list I’ve built over many years. I don’t generally search for “Zegna” or “Polo,” but I do search for many, many less-well-known or defunct brands. Sometimes it’s old stuff, like Sulka, sometimes it’s new stuff, like Archival Clothing. Every day, I sift through five hundred or a thousand listings, and whenever I find something I like, I drop it into a Google Doc that I share with Derek and Kiyoshi. Generally, I’m looking for stuff that’s distinctive, wearable (or at least interesting), and with the potential to be a bargain. I also try to pick a little more stuff from the extremes of the size spectrum, so they’ll be a bit better represented.

Sometimes I find an auction for a cool item that seems like it might be coming directly out of someone’s closet. On those items, sometimes I’ll look at the seller’s other auctions – maybe they’re someone with taste. That’s usually where stuff from better-known brands comes from on the list.

Sometimes I’ll also spend some time just flipping through newly listed auctions in the vintage section. If you notice a particularly high number of vintage items some week, I probably killed a slow half hour that way sometime in the previous few days. With vintage, the brand is significant, but I’m really just looking for stuff that catches my eye. I’ve also got a few dozen vintage sellers saved in My eBay who always have good stuff, and sometimes I’ll flip through whatever they’ve got up.

Derek and Kiyoshi both toss stuff into the mix when they come across it, too. Both are eBay shoppers, and as you know, if you find a great item that doesn’t fit you, you want to find it a good home. We also sometimes get contributions from our semi-anonymous friend The RJ Cat, whose lists on StyleForum years ago were an inspiration for ours.

It’s a huge task, but frankly, I enjoy it. It’s a nice thing to do while I’m waiting for an important, or when I want to take a break from my real job.