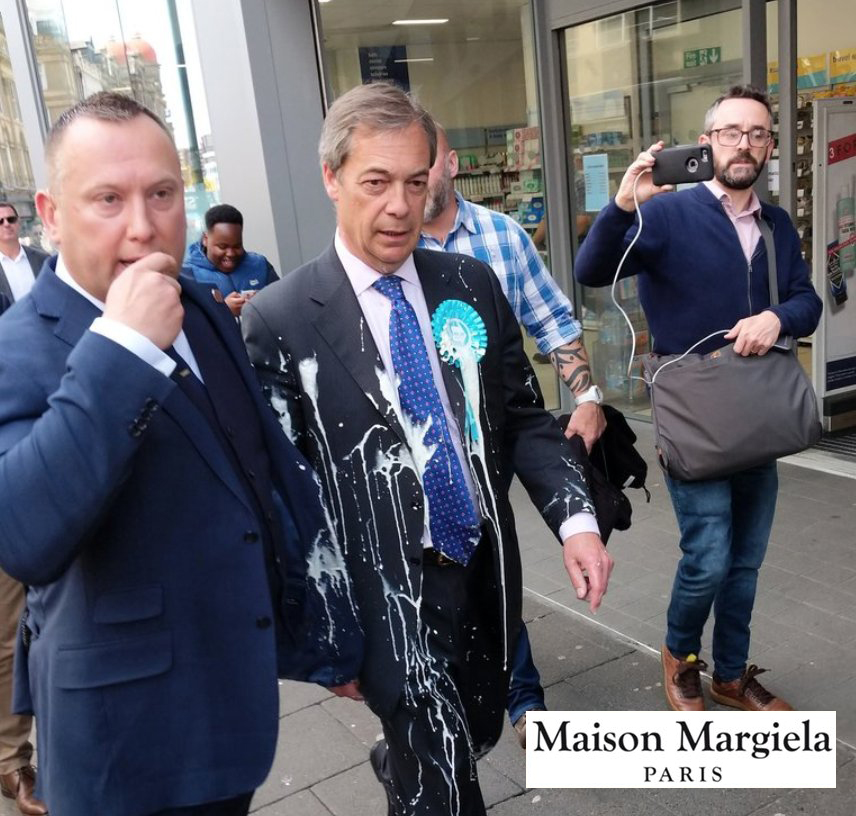 Politics has always been a dirty business, but it’s never been this dirty. Over the last few weeks, angry Brits have thrown, chucked, and hurled creamy milkshakes at far-right politicians. The first victim was far-right activist Tommy Robinson, who was hit not once, but twice while campaigning in public. The first time, a protestor threw his milkshake from afar, like Steph Curry from the three-point line, cleanly hitting Robinson and covering him with sweet, sticky liquid. The second episode, captured on video, happened the next day. No matter your politics, the video is hard to watch. Decent people everywhere can agree: no one should film vertically.

This past Monday, the latest victim was Nigel Farage, who’s deeply unpopular in Britain for his extreme views on topics such as immigration and Brexit. Farage hadn’t been campaigning for more than twenty minutes in Newcastle when a man splashed him with a creamy and delicious drink. His navy suit, Macclesfield print tie, and Brexit Party badge were left dripping with banana and salted caramel milkshake, making his outfit look like an avant-garde runway piece by Maison Margiela. In a video of the episode, witnesses can be heard laughing while Farage tries to swiftly exit the scene. Farage reprimands his security team: “Complete failure. How did you not stop that?”

Paul Crowther was later identified as the milkshake thrower (which disappoints me to no end because, if his name was John, I could have written John Lobbed). According to PA reporter Tom Wilkinson, Crowther said he was very much looking forward to enjoying his Five Guys milkshake ($6.68), but thinks it went to a good cause. “It’s a right of protest against people like him. The bile and the racism he spouts out in this country is far more damaging than a bit of milkshake to his front,” Crowther said. After the attack, Crowther was arrested and held in custody. Farage says he will press charges.

Throughout history, unpopular public figures have dodged rotten eggs, tomatoes, and even cabbage, but milkshakes are the newest foodstuff in the angry protestor’s arsenal to cause embarrassment without serious injury. Burger King over the weekend even reminded Scottish people that they sell delicious milkshakes, seemingly in response to McDonald’s being asked to not sell milkshakes and ice cream in Edinburgh during a Farage rally. We obviously don’t endorse anyone throwing anything, but the recent spate of attacks made me wonder yesterday: what can you do if you get milkshaked?

I reached out to Stu Bloom, owner of Rave FabriCARE, considered by many to be one of the best dry cleaners in the United States.“Milkshake stains will depend on the material,” explains Bloom.”Milk is a protein and protein stains react differently depending on the fiber. A protein stain on silk is one of the most difficult of all stain/ fabric combinations. Linen is next, then wool. Cotton is relatively easy because it can be wet cleaned, but you still have to be careful. We have two position papers related to this topic. They address stains of almost any kind, milkshake or otherwise.” 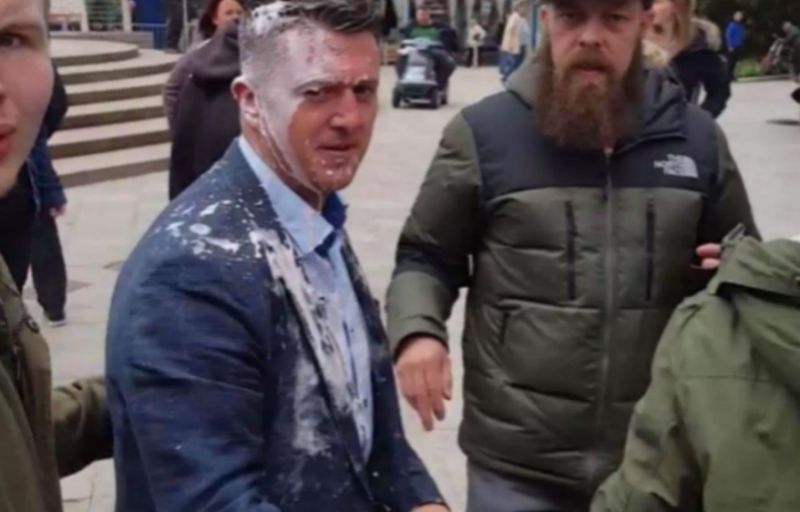 If you want to try your hand at washing a garment at home, it helps to have something that has a more straightforward construction (e.g., one layer of material, rather than multiple layers with interlinings) and is made from cotton, rather than wool. Bloom also recommends against using pre-treatment methods, such as Tide sticks and pouring liquid detergent on the stain before washing.

“You don’t know how those products will react with the dyes,” Bloom says. “Some fabrics are made with poor dyes that are top-dyed or surface-printed. These will easily fade over time, particularly if they’re in darker colors. It’s not limited to cheap garments, either. Today, we see jeans from high-end manufacturers such as Adriano Goldschmied that are easily damaged in this way. Remember the golden rule: Don’t rub, scrub, or wipe. Just blot up the excess and wash (using common sense).”

Our recommendation: if it’s a simple, cotton garment that you can stand to lose, try to clean the garment at home. Milkshakes are mostly made of water, and unlike oil stains, may come out in the wash. For slightly more expensive clothing or things made from wool, linen, or silk, use a reputable dry cleaner. For items you care about, send it to Rave FabriCARE (they take mail-ins). A few years ago, Jesse poured kefir all over himself as part of a PTO episode, and we sent his moldy, drenched suit to Rave to see what they could do. Amazingly, the garment came back looking new.