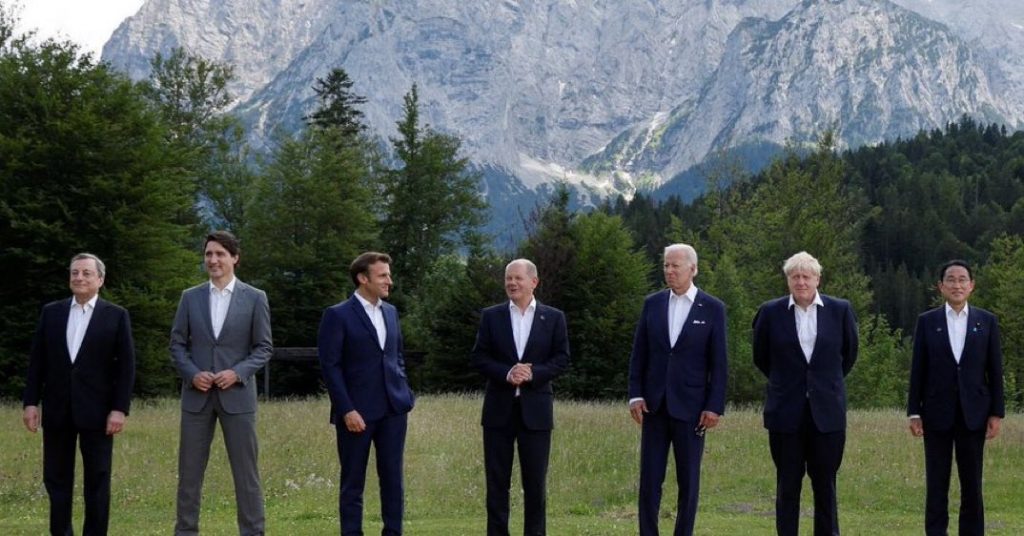 In 2015, the leaders of the largest economies—US President Barack Obama and German Chancellor Angela Merkel, among them—gathered at a small village in the Bavarian Alps for the 41st G7 summit. At some point, they came together for a group photo. Obama was sitting in the middle with his arms spread, legs crossed, and wearing a dark worsted suit and grey necktie. The other men in the photo were wearing similar outfits, varying only in the conservativeness of their silk neckwear color.

Seven years later, the 48th G7 summit is happening in the same location. And like last time, the leaders gathered for a group photo. Except now the image looks a little different. Obama has been replaced by Biden, Merkel by Scholz, Cameron by Johnson, etc. Furthermore, none of the men have neckties, despite wearing them earlier in the day for their meetings. It’s unclear what prompted them to shed their four-in-hands, but the visual of blank white shirts is striking.

It’s no secret that neckwear sales are at an all-time low. The uptick in tailored clothing and neckwear sales between 2000 and 2015 was just a brief reprieve in what has become a decades-long slide into business casual. In an effort to look professional, but still vaguely relatable, men have been slowly molting different parts of the traditional business uniform. This is not just about politicians, but also the average US office worker, who has struggled to find firmer footing in an increasingly vague dress environment. Some have kept the tailored jacket but ditched the tie. Others have kept the tie but abandoned the jacket. Many people don’t wear either of these things, working instead in flat-front chinos and dress shirts. (Aesthetically speaking, all of these are bad, and we think there are better ways to do business casual.) 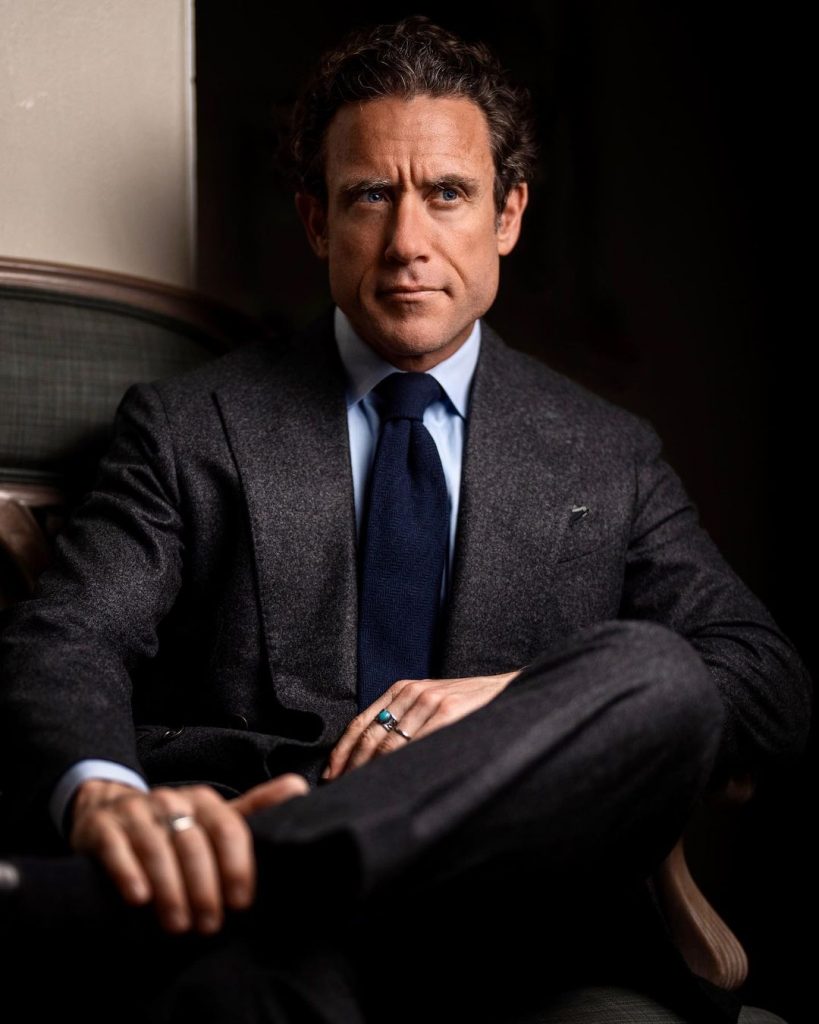 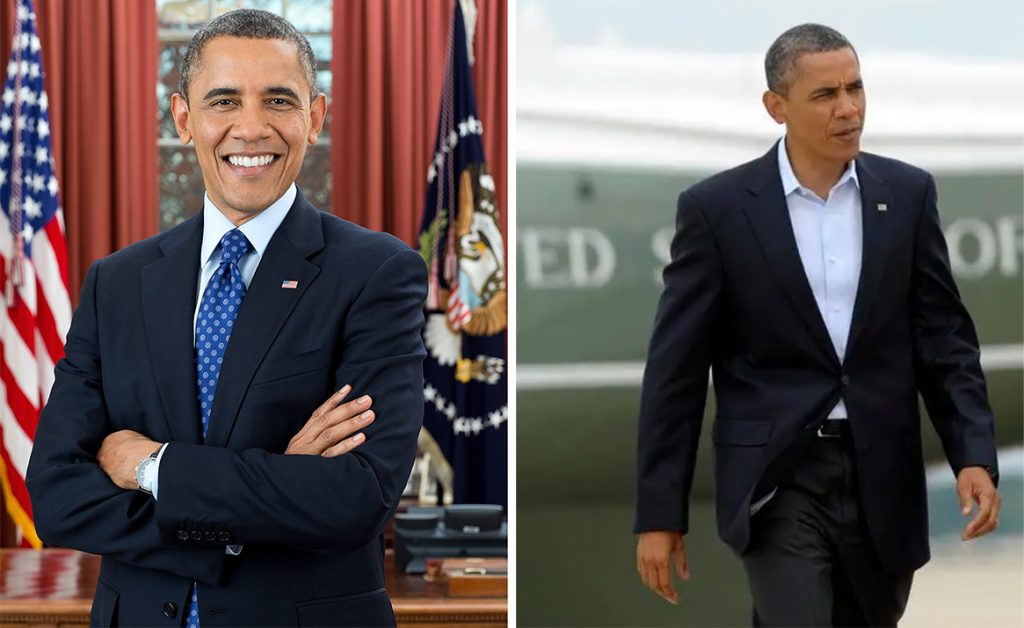 The thing is, some outfits don’t look right without a tie. A conservative suit in navy or grey, particularly when paired with a dressy spread collar shirt, cries out for something between the coat’s front edges. Without a tie, the shirt ends up looking too stark; the spread collar points are prone to slipping underneath the jacket’s lapels. The ensemble looks empty, like the night sky without stars.

Plus, ties are a great opportunity to accessorize what’s otherwise a very plain outfit. It gives color and visual interest. You can make a basic worsted suit more seasonal by changing out the neckwear: raw silk for summer, ancient madder for winter, knit ties to make things more casual, etc. We’re still big believers that almost everyone can use a black or navy grenadine. (Our advertiser Chipp sells some very affordable ones.) If you own a dark worsted suit—what we’ve called a sincere suit—you need at least one tie for the occasions where you’d wear such an outfit. This means weddings, funerals, christenings, court appearances, and other special occasions. 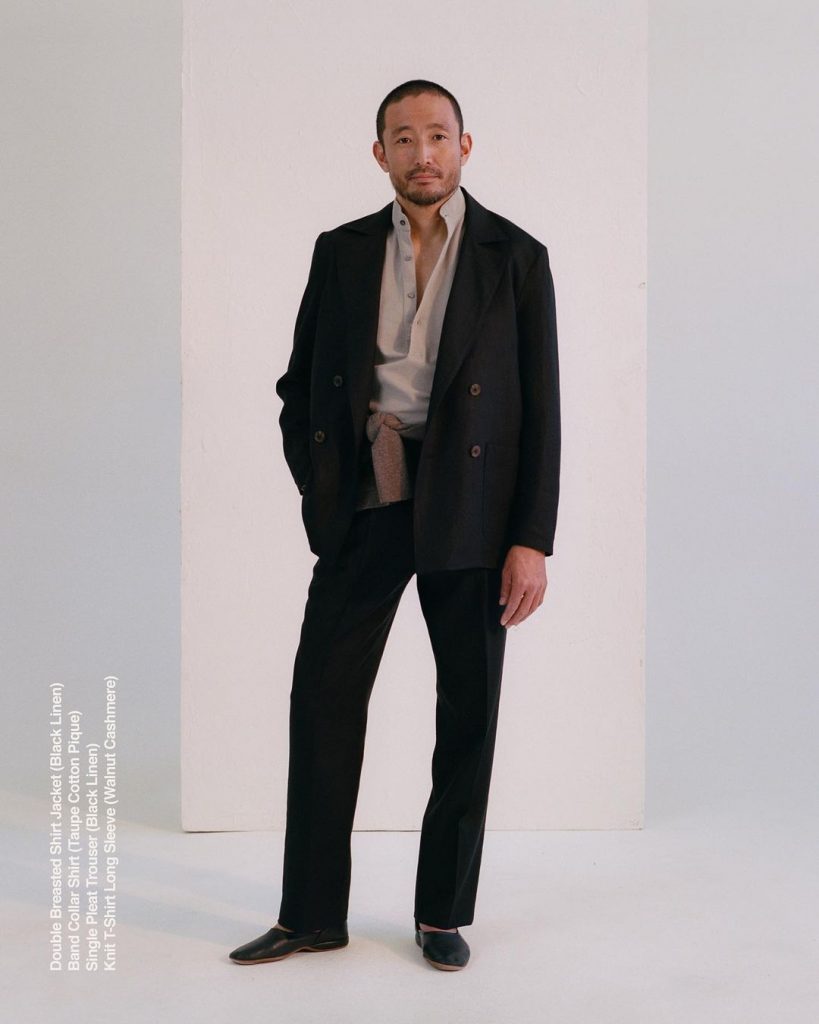 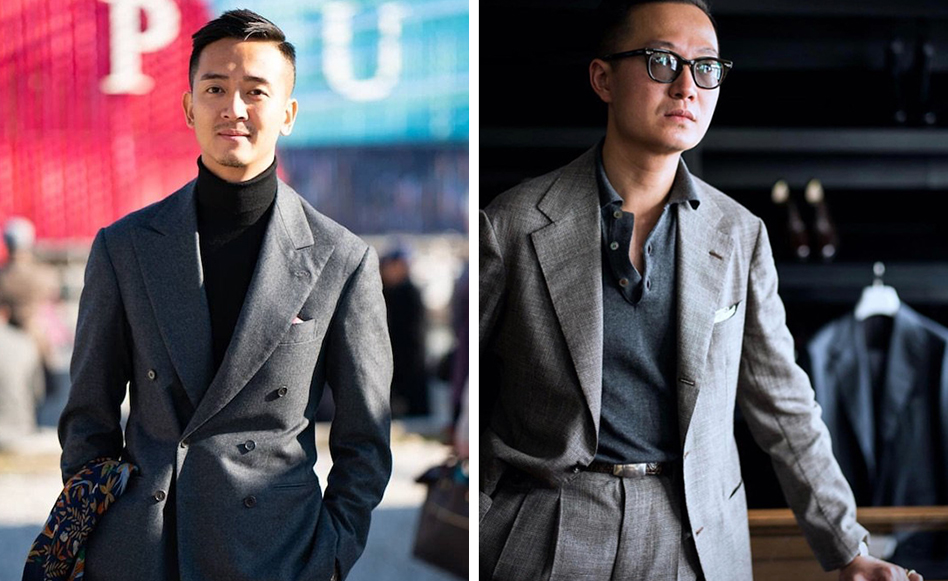 If you wear a suit without a tie, make it intentional. Don’t just drop the tie with a conservative business suit and stark white, poplin shirt made with a spread collar. Here are some ideas on how to wear a better tie-free outfit:

A more fashionably cut suit: Instead of a conservative business suit, wear a more fashionably cut suit. This isn’t just about the cloth, but the silhouette. Some suits, such as those from Camoshita and Stoffa, may still be made from a conservative worsted. However, their cut and construction signal that they’re meant for more informal environments. These suits might even look odd with traditional neckwear, so wear them open collared. The suit pictured above is a black linen suit from Stoffa, but you can imagine a similar outfit in a dark worsted. It’s all about the slouchiness of the silhouette here.

Wear a polo or turtleneck:  If you’re wearing a conservative business suit, consider dropping the white or light blue dress shirt in favor of a polo or turtleneck. This helps dress down the suit. Plus, since these things were never meant to be worn with a necktie, your top doesn’t look like it’s missing something. I particularly like the made-to-measure Tencel-cotton polos at Proper Cloth (an advertiser on this site). These fabrics have to be felt to be believed (I recommend ordering a swatch before committing to a shirt). The touch of Tencel makes the reverse side of the fabric kitten soft—a delight to wear next to the skin. I wear this dark slate color with suits in navy or olive, as well as sport coats in brown, cream, or navy. Much like black sweaters, the dark gray color here serves as a neutral background and keeps the focus on your coat, not the emptiness of your shirt. The color also looks very modern and keeps you from looking like you’re at a Hilton business lunch, which can sometimes happen with white pique cotton polos. 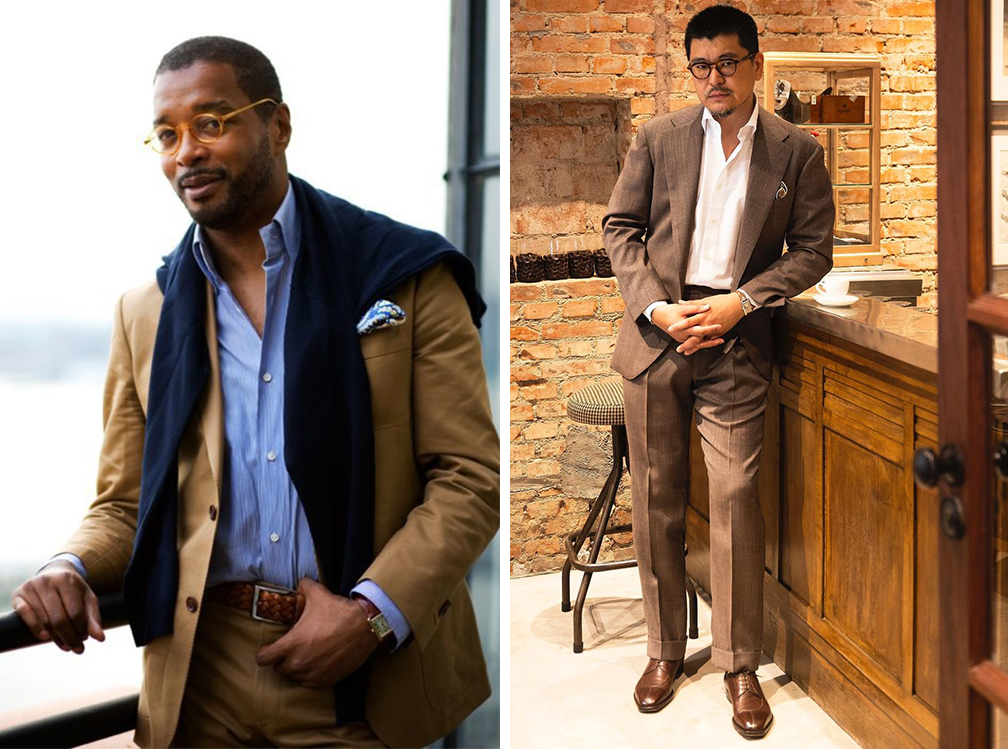 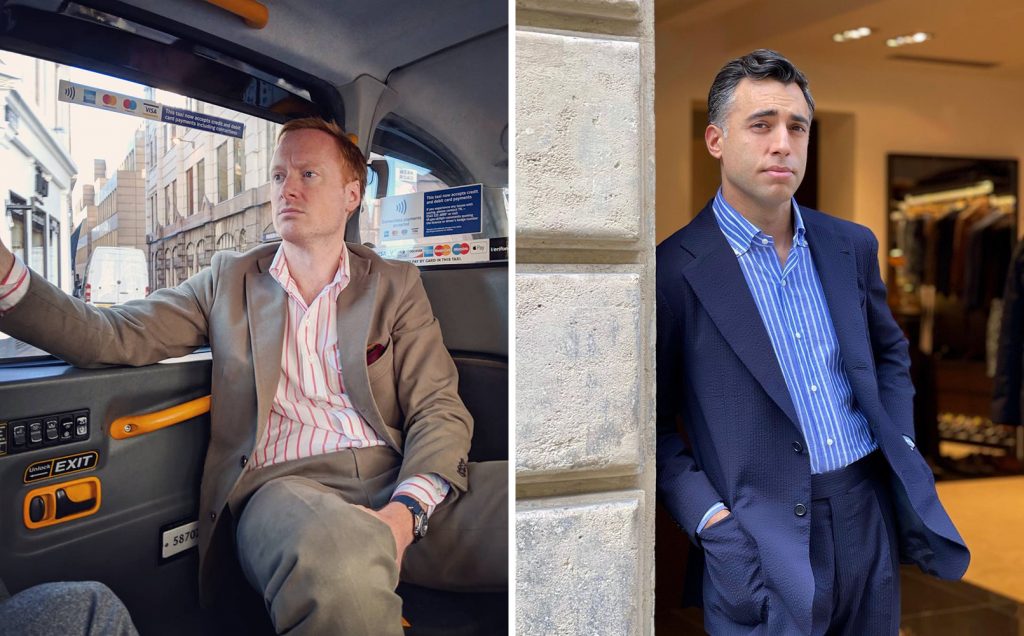 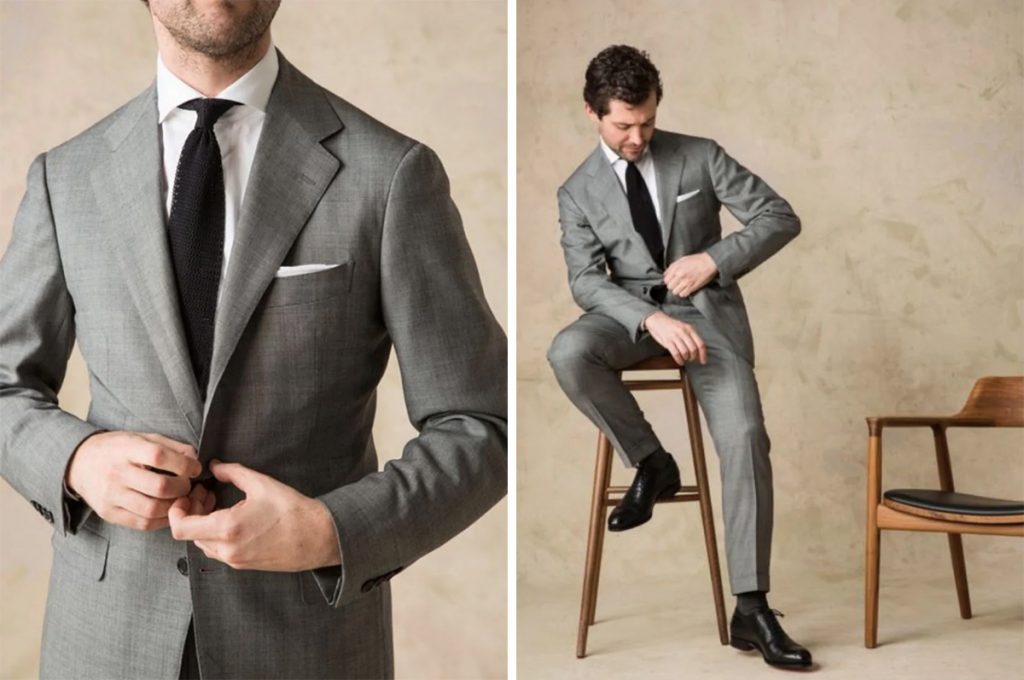 Wear a conservative, casual suit: If fashionable suits with slim or slouchy silhouettes make you uneasy, consider a conservative cut made from casual material. Even a cotton or linen suit from traditional clothiers such as J. Press or The Armoury will feel very natural with an open collar. It’s all about making things look intentional; not just losing the necktie on a traditional business uniform in a low-effort way to look casual.

Wear a patterned shirt: One of the challenges is figuring out how to add visual interest where a tie would normally occupy. So instead of a plain white or light blue shirt, try something patterned. A classic blue-and-white Bengal stripe is the easiest to wear, but you can also try other classic combinations, such as those pictured above. It also helps to wear button-down collars, so your shirt collar isn’t slipping underneath your jacket’s lapels.

A knit tie: Finally, you can always reach for a floppy knit tie. They’re the most casual expression of neckwear and can be worn with everything from dark business suits to casual suits to sport coats of any variety. Black is the most versatile color (surprisingly). Get a silk knit tie if you want something you can wear year-round, or wool if you want something that will pair exceptionally well with flannels and tweed. Square and pointed tips are both classics, but pointed tips are easier to wear so that the tie’s tip touches your belt buckle (as ties should). While this isn’t technically going open-collared, it’s a good way to ride the line between traditional business ensembles and the sad state of business casual.