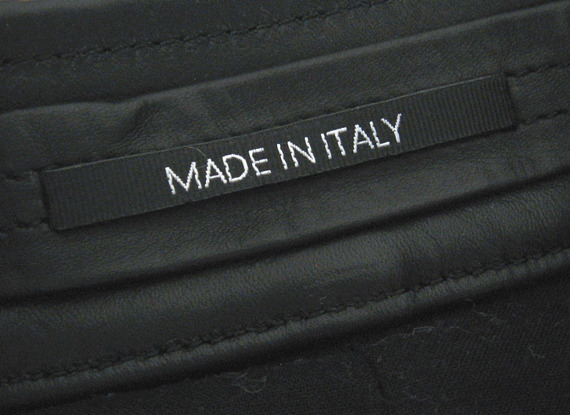 Pete posted a great excerpt yesterday from a recent New Yorker article about the relevancy of country-of-origin labels in the modern world. For clothing production these days, wool can be sourced from Australia, and then sent to Scotland to be spun into yarn, Ireland to be woven into fabric, and Italy to be “finished.” And that’s just for the fabric. The trimmings, such as felts and canvassing, can have their own global production chains, and all these “ingredients” can then be sent to one country (say, China) for most of the assembly, and then another (say, England) for the rest. The companies who do such work, by the way, can be Japanese-owned British firms with Chinese workers. In the end, does a “made in England” label really mean anything?

The article made me think of a rich area of research about the effects of such labels on consumer behavior. The most famous (or at least the most cited) study was done in 1965 by Robert Schooler. He took a sample of 200 students and had them evaluate several products, all of which were identical except in one way: they had (fictitious) country-of-origin labels. So, for example, some of the things he had students evaluate were swatches of the same beige fabric – medium weave, 80% cotton and 20% linen. Again, all identical, except one was labeled “made in Guatemala,” one “made in Mexico,” one “made in Costa Rica,” and one “made in El Salvador.” As you can probably guess, the students were biased by their own prejudices and saw differences in the fabrics that weren’t actually there. In this case, fabrics believed to be from Guatemala and Mexico were evaluated as being higher-quality than those from Costa Rica and El Salvador.

Schooler’s study launched an entire field of research, one that has been on-going for over forty years. All basically confirm his finding: that country-of-origin labels often bias people’s evaluations and are loaded with national stereotypes. There have been some refinements to the theory (mostly on issues regarding direction, strength, and generalizability of such biases), but they more or less say the same thing. Folks interested in reading more about these findings can check out this literature review by Keith Dinnie.

Do Country-of-Origin Labels Tell You About Quality?

Here’s the problem: many stereotypes have at their center a kernel of truth. That’s what makes them so socially “sticky.” It’s true that there are a ton of low-quality clothes produced in China and that many high-end ones produced in Western Europe. At the same time, I have many Chinese-made garments – such as sweaters by RRL and Phillip Lim, as well as outerwear by Nanamica – that are much nicer than many Western-European-made things. Country-of-origin tags are sometimes helpful in determining quality, but one shouldn’t read the whole story off of a label (especially when the garment is right there in front of you, and you can look at much more real and reliable dimensions of quality). Just because something was made in China doesn’t automatically mean that it’s bad (or, frankly, if it says it was made in Italy, it doesn’t mean it wasn’t made in China).

The cynic in me wants to believe that such labels are just ways retailers seek a competitive edge and manufacturers look for protection. Maybe so, maybe not, but with the kind of highly-fragmented, complex, global production chains that exist nowadays,* the New Yorker article asks a good question: do these labels even mean anything anymore?

* The New York Times had a good article many years ago about the fragmented production chain involved in the manufacturing of iPods, and it talks about which parts of the chain produce the most value (thus, are most worth trying to keep domestic). Spoiler alert: it’s not manufacturing.

(Note, this controversial post obviously doesn’t reflect the opinion of Jesse or Pete, just my own. For what it’s worth, however, it was made in America.)

Filed Under: Buy American, Country of Origin, Current Events, Keith Dinnie, Made in America, Made in China, Made in Italy, Made in USA, Nanamica, Perspectives, Phillip Lim, Robert Schooler, RRL, The New York Times, The New Yorker