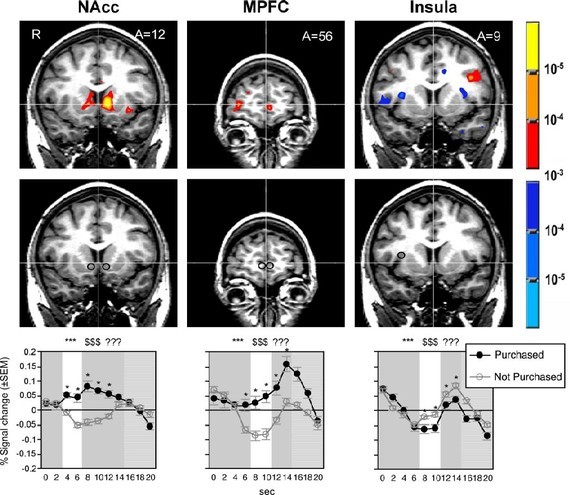 The Atlantic has an article today on the neurological pleasures of fast fashion. Not much new revealed here, except for the science behind what we already know – people like buying things and getting deals, and the culture of fast fashion has encouraged people to buy things they don’t really need. An excerpt:

The researchers then showed the subject the item’s price. The medial prefrontal cortex weighed the decision, as the insula, which processes pain, reacted to the cost. Deciding whether to buy put the brain, as the study put it, in a “hedonic competition between the immediate pleasure of acquisition and an equally immediate pain of paying.” The mindset is in line with evidence that shows happiness in shopping comes from the pursuit of goods—from the sensation of wanting something.

While pleasure kicks in just from the act of looking, there’s also pleasure in purchasing, or more specifically, in getting a bargain. The medial prefrontal cortex is the part of the brain that does what’s essentially cost-benefit analysis. “It seemed to be responsive not necessarily to price alone, or how much I like it, but that comparison of the two: how much I like it compared to what you charge me for it,” says Scott Rick, one of the study’s authors, now an assistant professor of marketing at the University of Michigan.

Fast fashion perfectly feeds this neurological process. First, the clothing is incredibly cheap, which makes it easy to buy. Second, new deliveries to stores are frequent, which means customers always have something new to look at and desire. Zara stores famously gets two new shipments of clothes each week, while H&M and Forever21 get clothes daily. These brands are notorious for knocking off high-end designers, allowing the customer to get something at least superficially similar to the original at a small fraction of the cost, and they’re priced lower than the rest of the market, making their products feel like a bargain.

The consumption isn’t by any means limited to the U.S. Women in Britain, for instance, now own four times as much clothing as they did in 1980. This glut of clothing is having effects beyond stuffing our closets. About 10.5 million tons of clothes end up in American landfills each year, and secondhand stores receive so much excess clothing that they only resell about 20 percent of it. The remainder is sent to textile recyclers, where it’s either turned into rags or fibers, or, if the quality is high enough, it’s exported and cycled through a cut throat, global, used-clothing business.