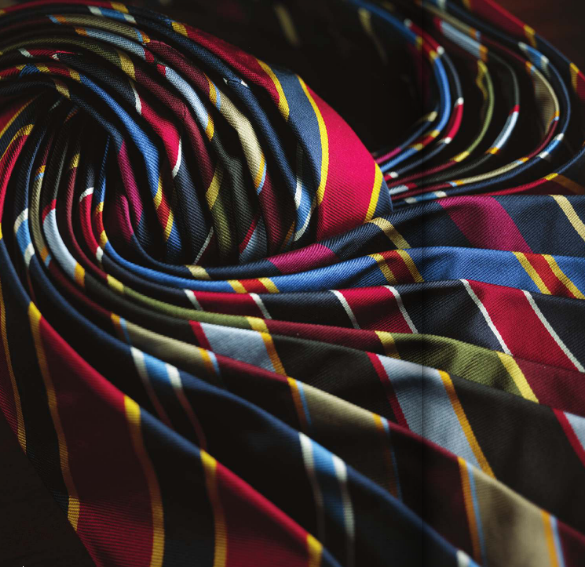 I don’t know anyone who wears ties that doesn’t have more neckwear than they need. Ties are relatively inexpensive, easier to size right, and can help satisfy that urge to buy something new. The problem with accumulating ties here and there is that you often wind up with a haphazard collection – one with dozens of pieces, but never the right thing to wear.

In my time wearing ties, I’ve found the ones that get the most use fall into two categories.

The second are striped ties, like you see above. Traditionally, Englishmen wore these ties with the stripes sloping down from left to right, while Americans went the other direction. The style originated in the early 20th century, when decommissioned British officers continued to wear their regimental colors after they returned to civilian life (hence the name “regimental striped ties”). Anglophiles in the United States imitated the practice, but flipped the direction of the stripes so they wouldn’t be accused of being parvenus.

Today, the colors and direction of the stripes don’t really matter anymore, as nobody really remembers the origin of these things. The only thing that’s important is that such ties – at least in the United States – are incredible versatile. Whereas foulards – a type of small-scale, symmetrical, non-representative pattern (usually geometric or floral in nature) – are often better paired with suits, regimental stripes can be worn with either suits or sport coats. And that’s very helpful if you, like me, wear sport coats more often than anything fancier.

Of course, there are other ties worth buying. Paisley patterned ancient madders are fantastic for fall, and a couple of checked or dotted designs are useful too. But for a solid foundation in your neckwear wardrobe, I’ve found solid-colored, textured neckties, along with regimentals, to be the best. I’d suggest getting them in various materials and colors before you expand too far elsewhere.

(Above picture taken from a Ben Silver catalog)