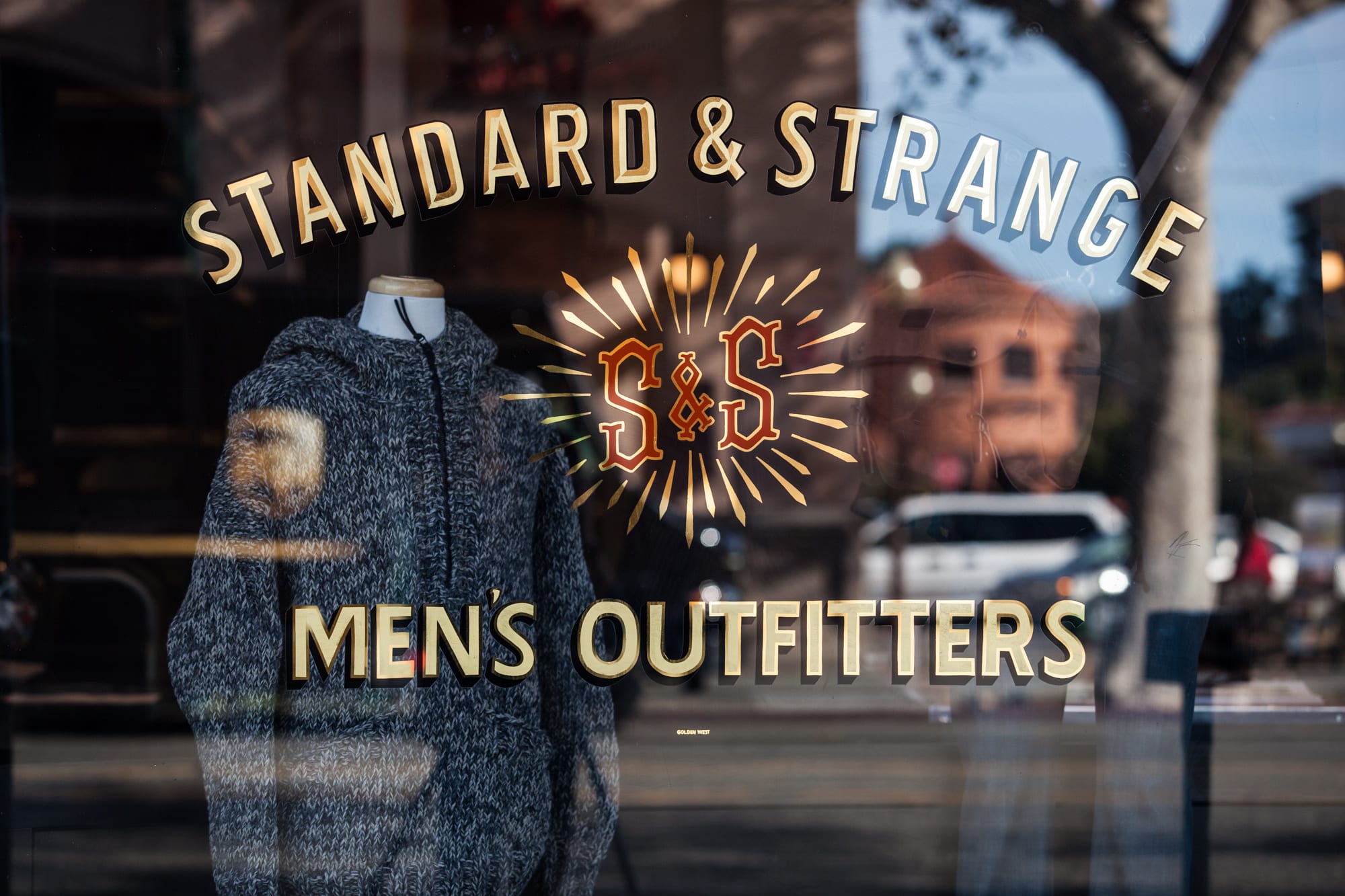 About ten years ago, I was having dinner with a friend in Temescal, a neighborhood in North Oakland bordering Berkeley. While we waited for a table, I snuck out to explore the area. Behind the pizzeria, I found a charming bocce ball court and a small, paved pathway flanked by quaint boutique businesses. Companies were selling sculptural succulents, well-thumbed hardbacks, salvaged treasures, honey from nearby hives, and sugar-dusted doughnuts filled with Mexican chocolate or pluot jam. It’s the kind of shopping village where young families and the occupationally hip intermingle, united in their use of NPR tote bags.

I also saw a menswear shop with a painted store window that read: “Standard & Strange.” Like the other thumbnail-sized businesses on this pathway, Standard & Strange was housed in a unit that used to be a municipal horse stable. In another era, Oakland used this space to “park” their horses and carriages before turning them into long-term storage units and eventually boutiques. This history explains why the area is hidden, tucked away from the main road, and accessible only through a side street (or the backdoor of a contemporary pizzeria). It was never meant to attract passerby, which is why it’s surprising that so many independent businesses have been able to thrive here.

In those early days, Standard & Strange had to sell more of the standard than strange. To make rent, they stocked the kind of basics that defined the heritage menswear movement: raw denim Tellason jeans, heavy flannel Taylor Sitch and Rogue Territory shirts, rugged Topo and Mission Workshop bags, and small USA-made accessories, such as Rite in the Rain notebooks. The store was an upgrade from the other menswear options in the area, but not that unusual during the time (or even now). 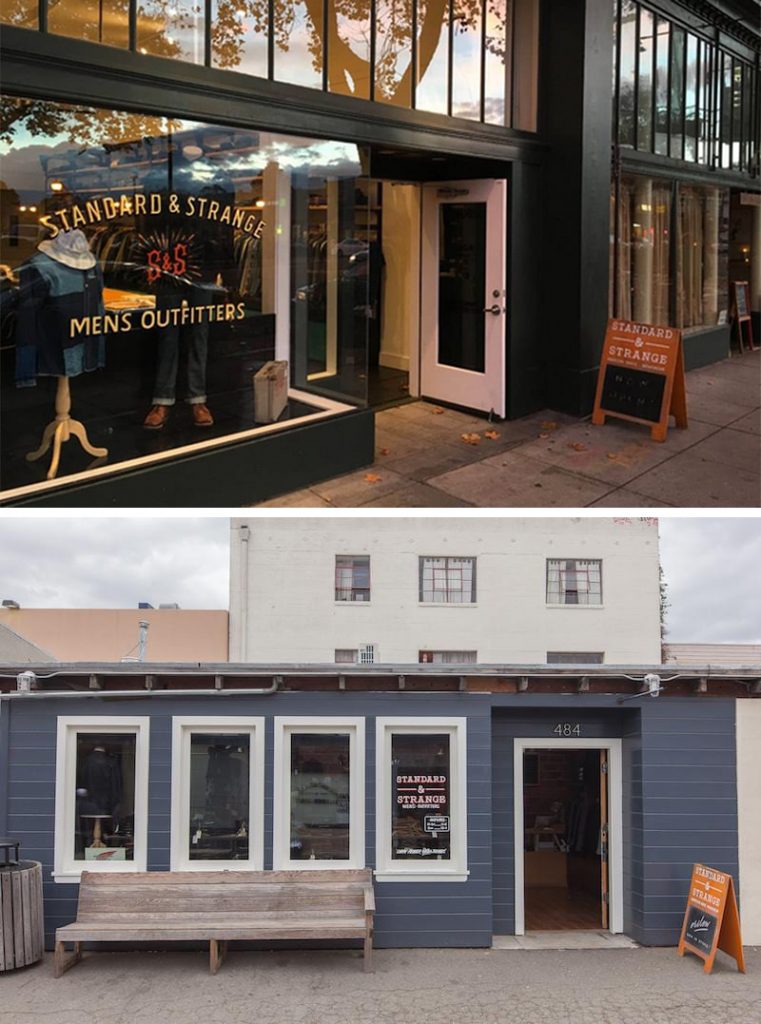 Top: the new location on Telegraph; bottom: the original location behind Pizzaiolo

Over the years, however, Standard & Strange has really evolved. They’re now headquartered around the corner from their original location. The new spot is larger and has giant windows facing two of Oakland’s main thoroughfares, 51st Street and Telegraph Avenue. You can still find the raw denim jeans, heavy flannel shirts, and work boots that characterize their beginnings (and constitute many men’s wardrobes). But it would be hard to describe anything here as “basic.” They’re among the few, sometimes only, West Coast retailers for hard-to-find labels such as Kapital, Indigofera, Ooe Yofukuten, Papa Nui, and The Real McCoys. They’re also the only US retailer I know of for Bryceland’s, the Tokyo-based shop founded by former Armoury employee Ethan Newton. For years, workwear obsessives online talked about and lusted over Clinch boots, a line of hand-inseamed engineered boots produced by Brass Tokyo. For those based in the US, few could get a pair until Standard & Strange brought them over.

“In the beginning, we couldn’t responsibly afford to both buy into the basics that kept the doors open and dive deep into directional buys,” says Standard & Strange co-founder Jeremy Smith. “We started getting more adventurous pretty early on, but we also didn’t have a large online presence to expose the full depth of our selection. We brought in Kapital and Tender very soon after opening, and played around with some more interesting options from brands such as AXS Folk Technology, Kyle Ng’s brand before starting Brain Dead.”

Last fall, while stores were still pick-up only and many were uncertain about the future of brick-and-mortar retail, Standard & Strange was quietly working on opening a new location. Located on 238 Mulberry Street in New York City, this store’s interior vaguely echos the company’s Oakland headquarters. The space is calming with its white walls, vegetable-tanned leather, blacked steel, and blonde woods. High-touch areas where sales associates are expected to spend a lot of time with customers have leather-topped tables built around cast-iron legs. The doors even have leather-wrapped handles designed to age like the store’s heritage-style goods. “The store feels spacious, welcoming, and it smells like leather,” Smith describes. They did a soft grand opening in November, celebrating the moment by selling an exclusive run of Ooe Yofukuten jeans in-store (now sold out). 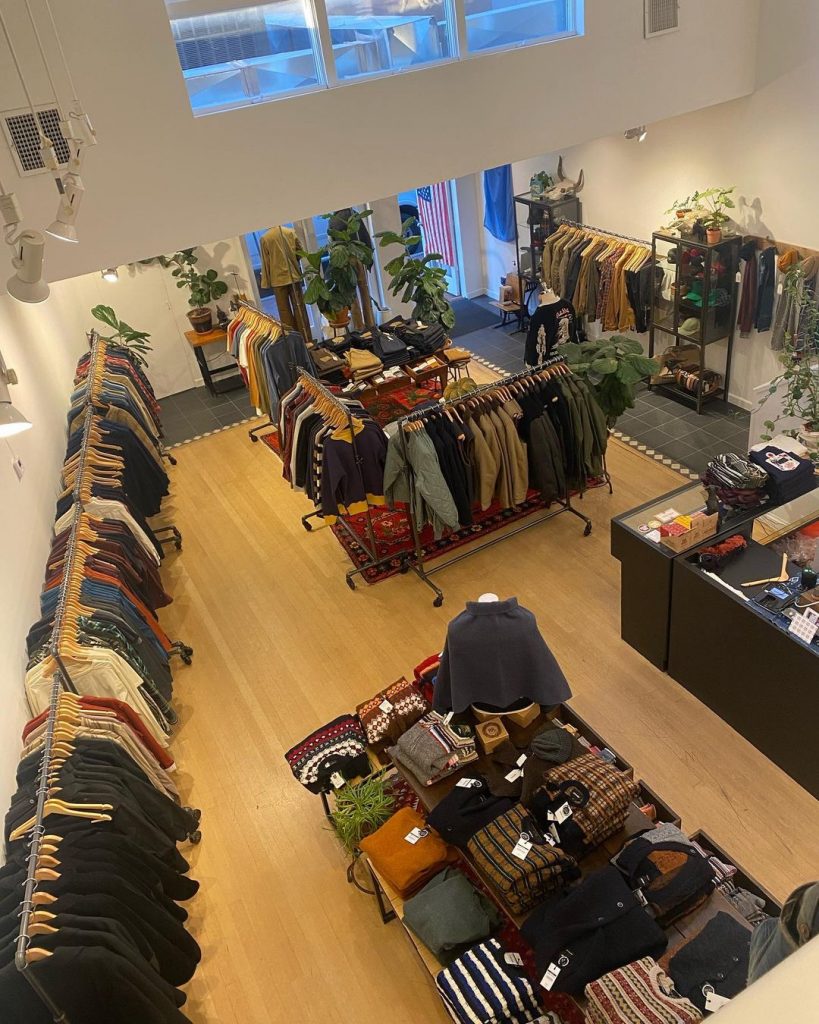 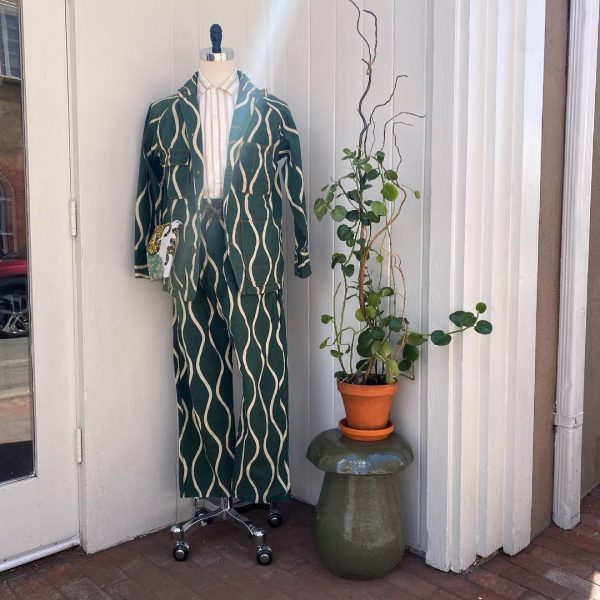 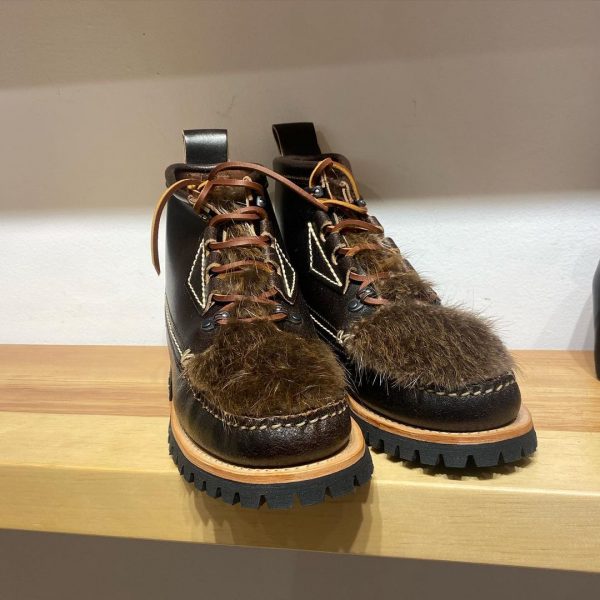 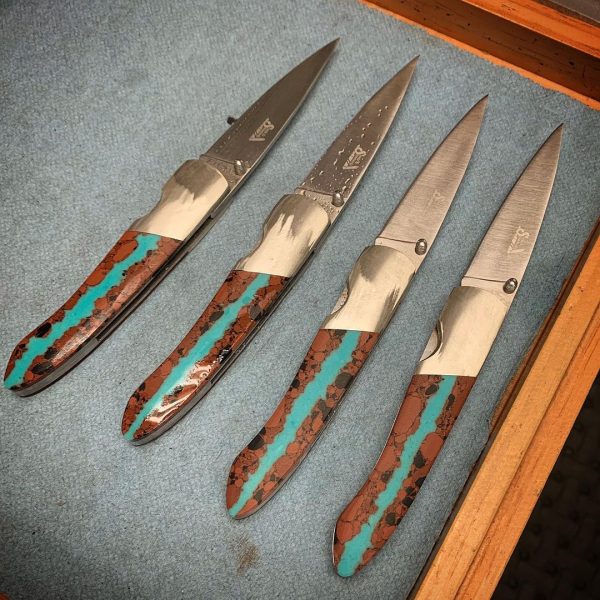 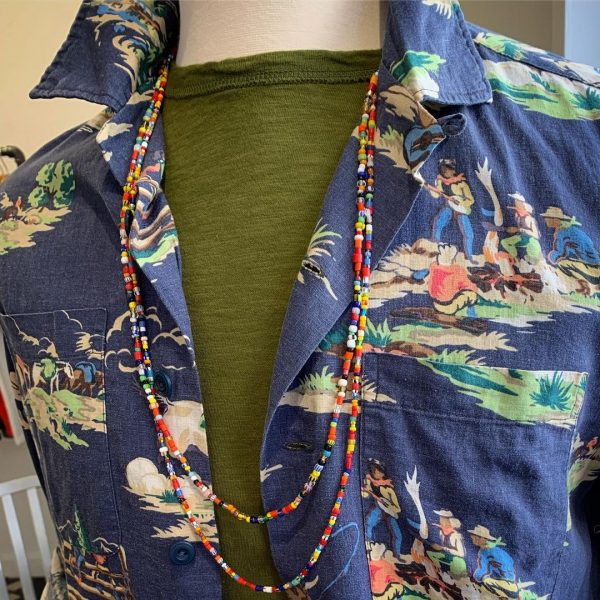 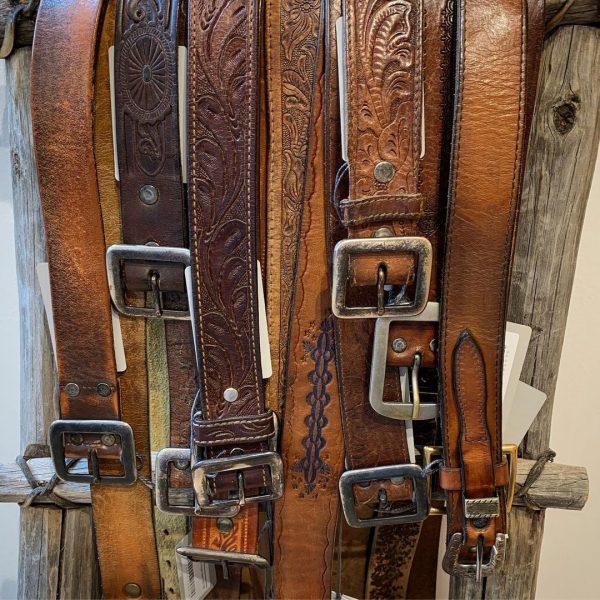 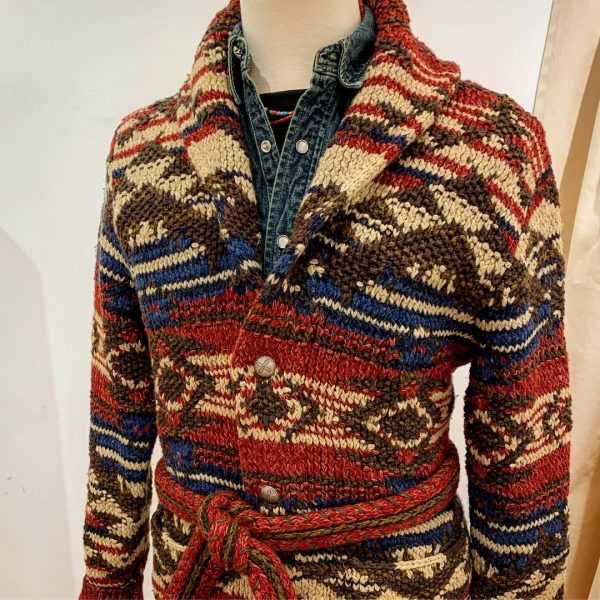 This NYC store is Standard & Strange’s third location, following a Santa Fe opening they made in 2019. “Our focus in Oakland is the rocksteady classics: boots, jeans, leather jackets, with some more exciting pieces sprinkled in, reflective of how our clients dress there. Santa Fe is where we get adventurous and weird with brands like Kapital and Bode and Clutch Golf,” says Smith. “New York will be a combination of both, but have a strong focus on having the deepest line-up in rare leather jackets and boots in the city.”

This new Mulberry store lives up to Standard & Strange’s name. “The [company’s] name comes from a book written by a woman called Jane Jacobs titled The Death and Life of Great American Cities,” says co-founder Neil Berrett, who now lives near the NYC location. “She was an urban planner who wrote a lot about how to make cities work. In her book, there’s a chapter where she talks about things that make a neighborhood work well. One of her arguments said that a neighborhood needs standard businesses, like deli, bookstore, things like that. And that they also need strange businesses, like underground art galleries, underground music venues, and many more. You need a balance between the two, and she described it as the standard and the strange.”

“When we choose the NYC location, we asked ourselves questions like ‘why do we want to be here,’ ‘what can we bring to the table,’ ‘how can we contribute to the community,'” Smith adds. “There’s this thesis among real estate brokers in NYC that some streets are ‘shopping streets’ and some are not. This idea made sense ten years ago, but now, as shopping has become experience-driven, you want to have neighbors that are excellent at different things. Our block, and the immediate walking radius, is packed with great food, excellent coffee, a nice grocery store, a cool little gym. This mix makes it a real neighborhood.” 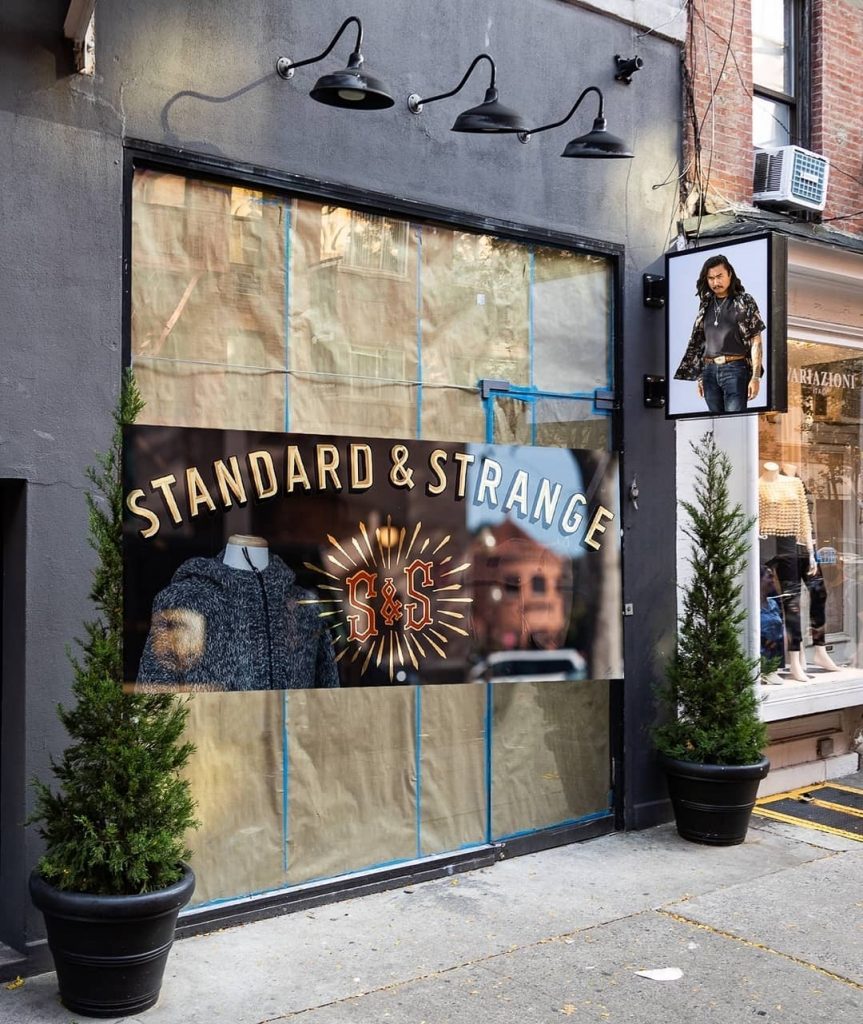 Outside the new location at 238 Mulberry Street, NYC

The new store took a while to build, as the process was hobbled by random supply chain shortages and issues related to the pandemic. To keep store employees and customers safe from COVID, they upgraded the store’s air filtration system. They also tore down a lot of the store’s previous structure and built up new walls. At a time when many are worried about the future of brick-and-mortar, which was already on shaky ground before the pandemic, Smith says that he thinks online simply can’t replace the experience of shopping in person.

“You can stuff brick-and-mortar under marketing, as it’s a great way to acquire customers at the same or lower cost than online, but that sells the entire enterprise short,” he says. “A world where B&M is an accessory to support social media is a very dystopic one to us. Spreadsheets do not account for the human connections made in the real world. Algorithms cannot replace an in-person conversation, a fit consultation, or the experience of touching fabrics and trying things on. If there’s one thing we’ve learned buying for our stores during COVID, buying sight-unseen is incredibly challenging. I have a significantly harder time buying big pieces online that will be the cornerstones of my wardrobe. If you look at the leather jackets we offer, for example, versus all of the options online, it’s tough to draw out the minute differences that add up to a significantly better product.”

Smith adds: “Predicting the future of brick-and-mortar in such wild times is a challenge, but it looks bright regardless of the ongoing unprecedented chaos we’re living through. For niche and specialty retailers, having a physical place to build community and one-on-one relationships is more important than ever. For mass-market retailers, as the cost of digital goes up, the cost of running a brick-and-mortar makes more sense in comparison. We love brick and mortar retail, we believe in it, and we’re hell-bent on having fun and making it successful.”

Readers who live in or near the Bay Area, Santa Fe, or New York City can visit Standard & Strange at one of their locations. I find that the stock online doesn’t always reflect their stock in-store, so it’s worth stopping by every now and again to see what’s in. 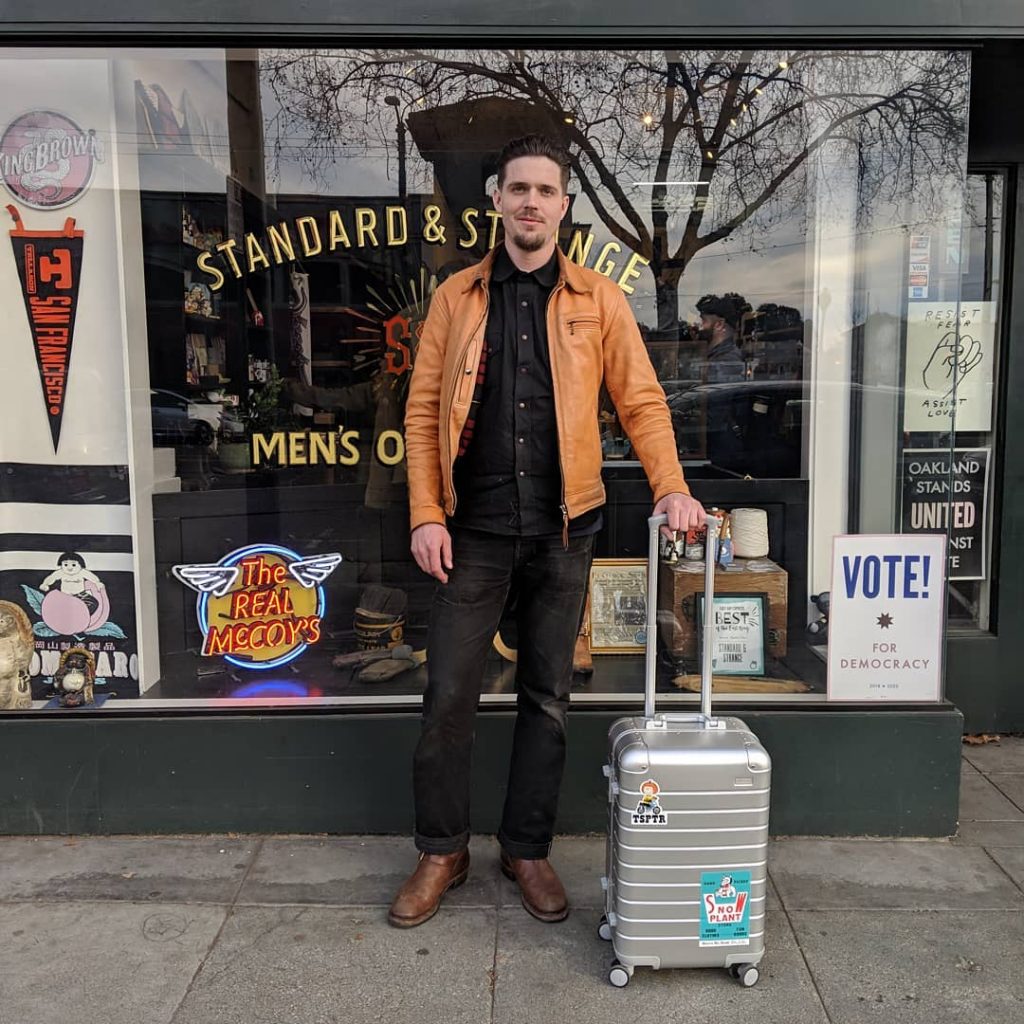 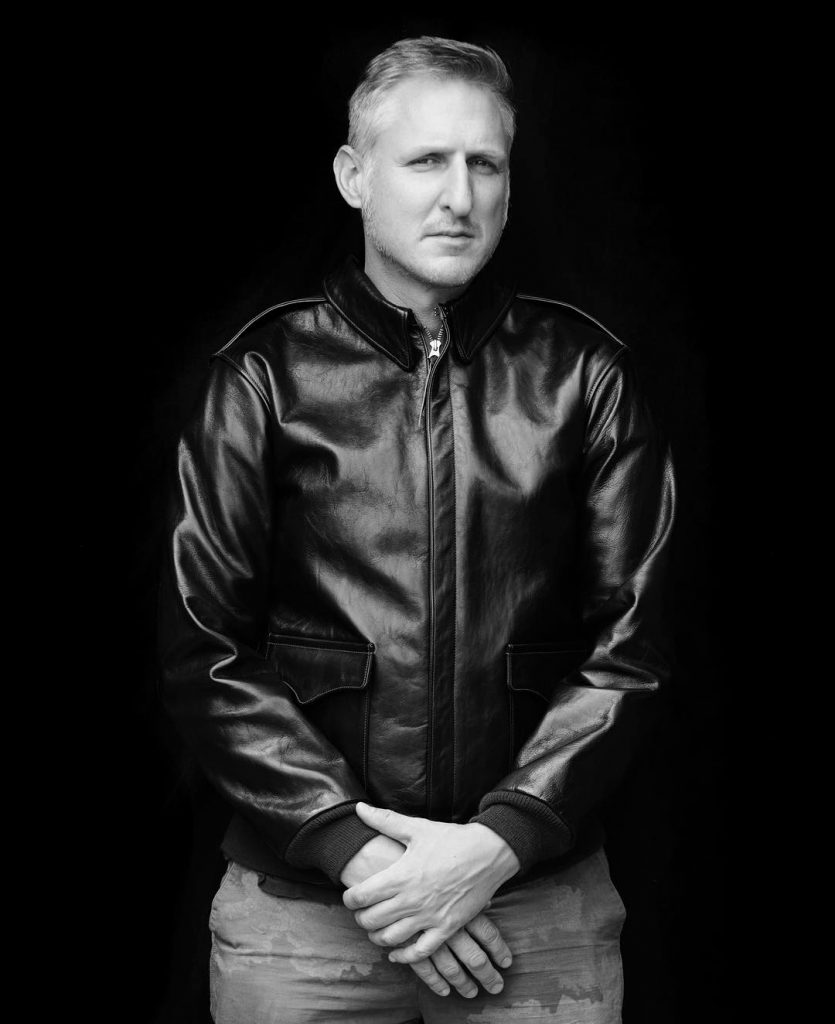 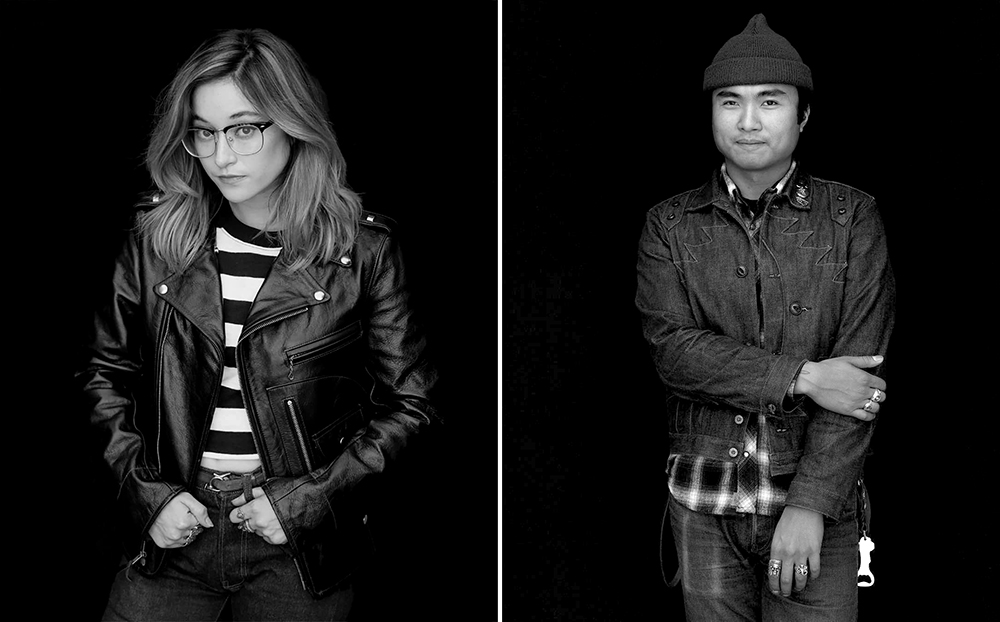 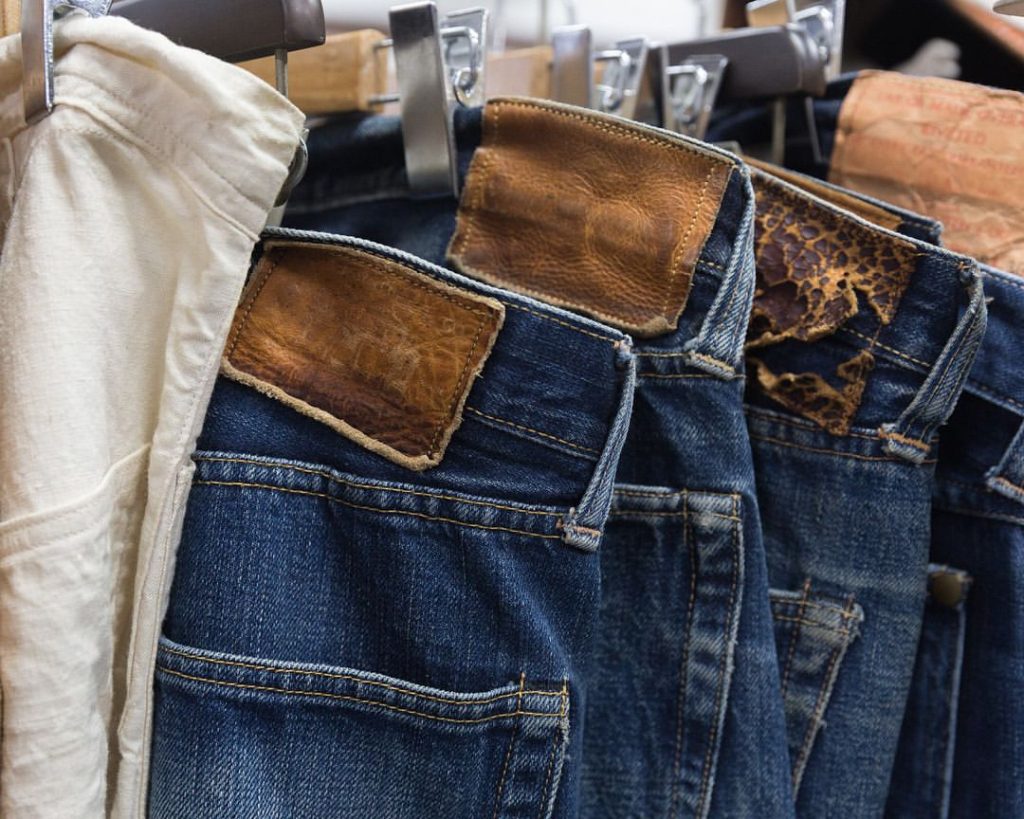 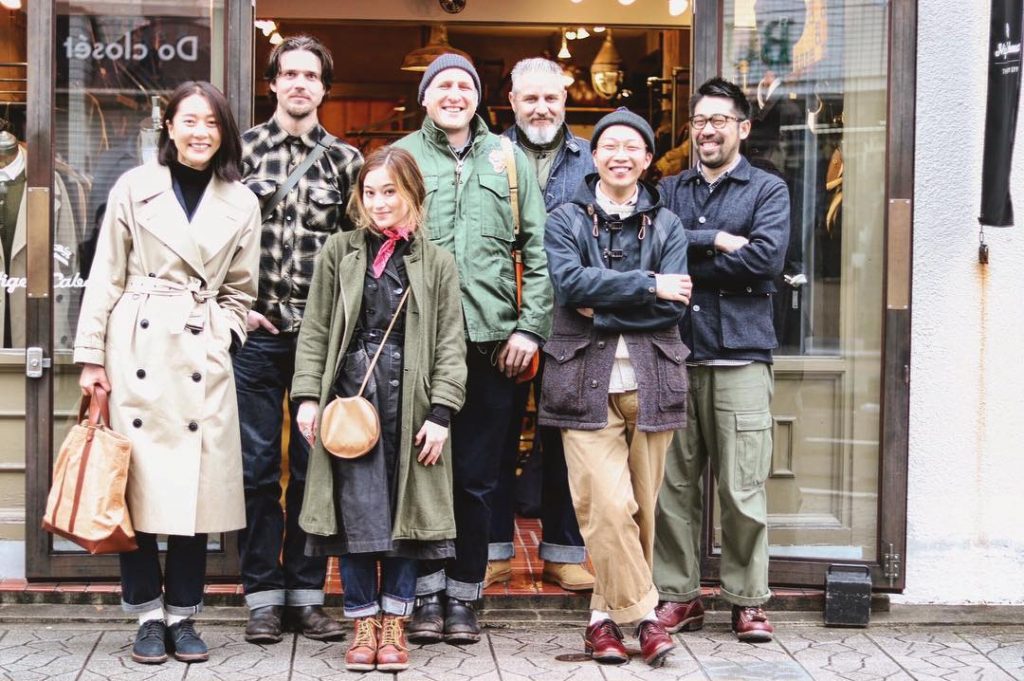 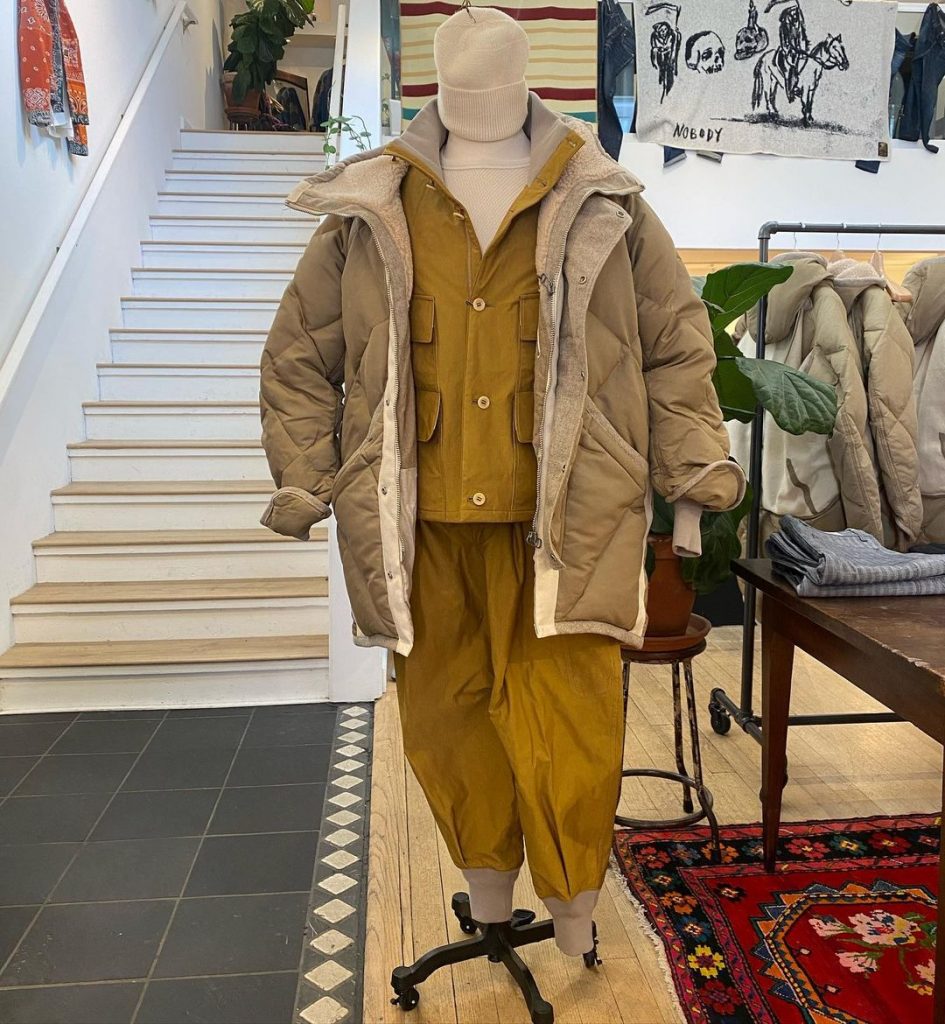 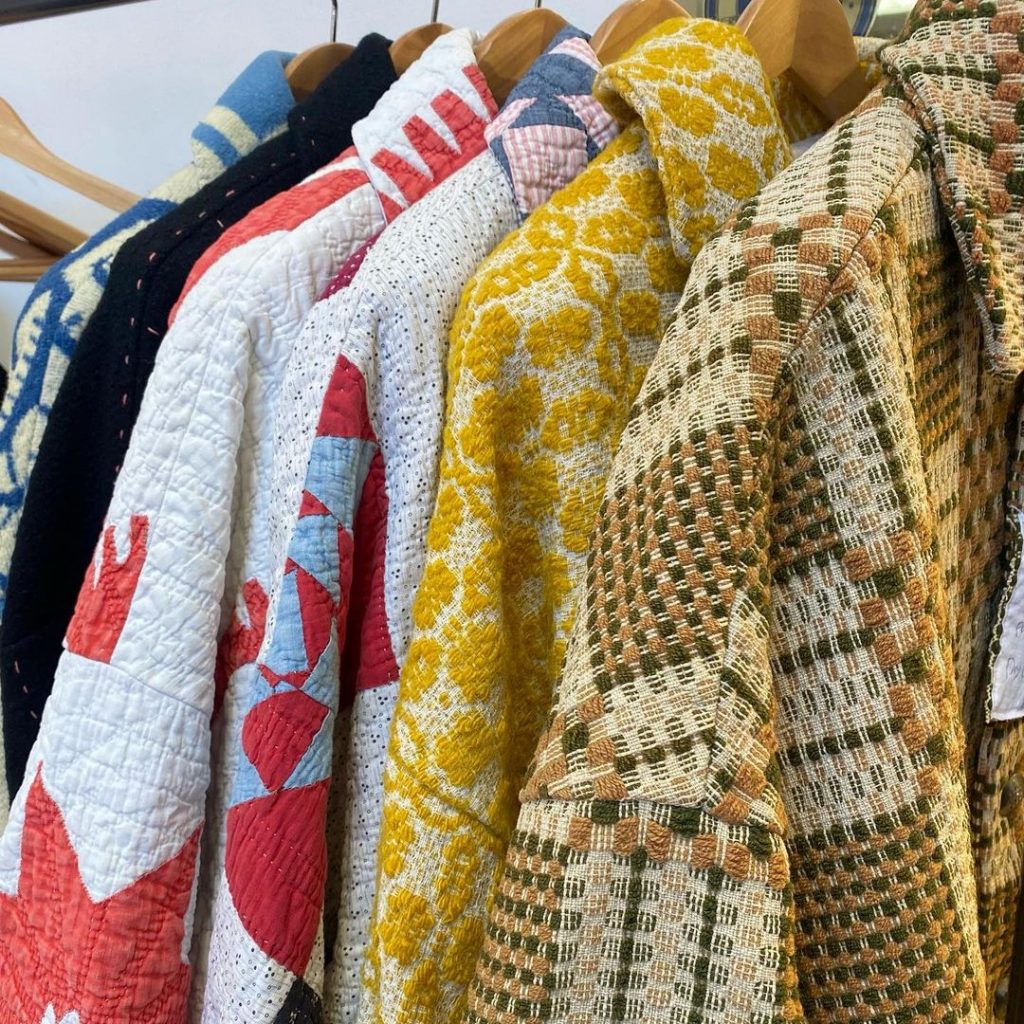 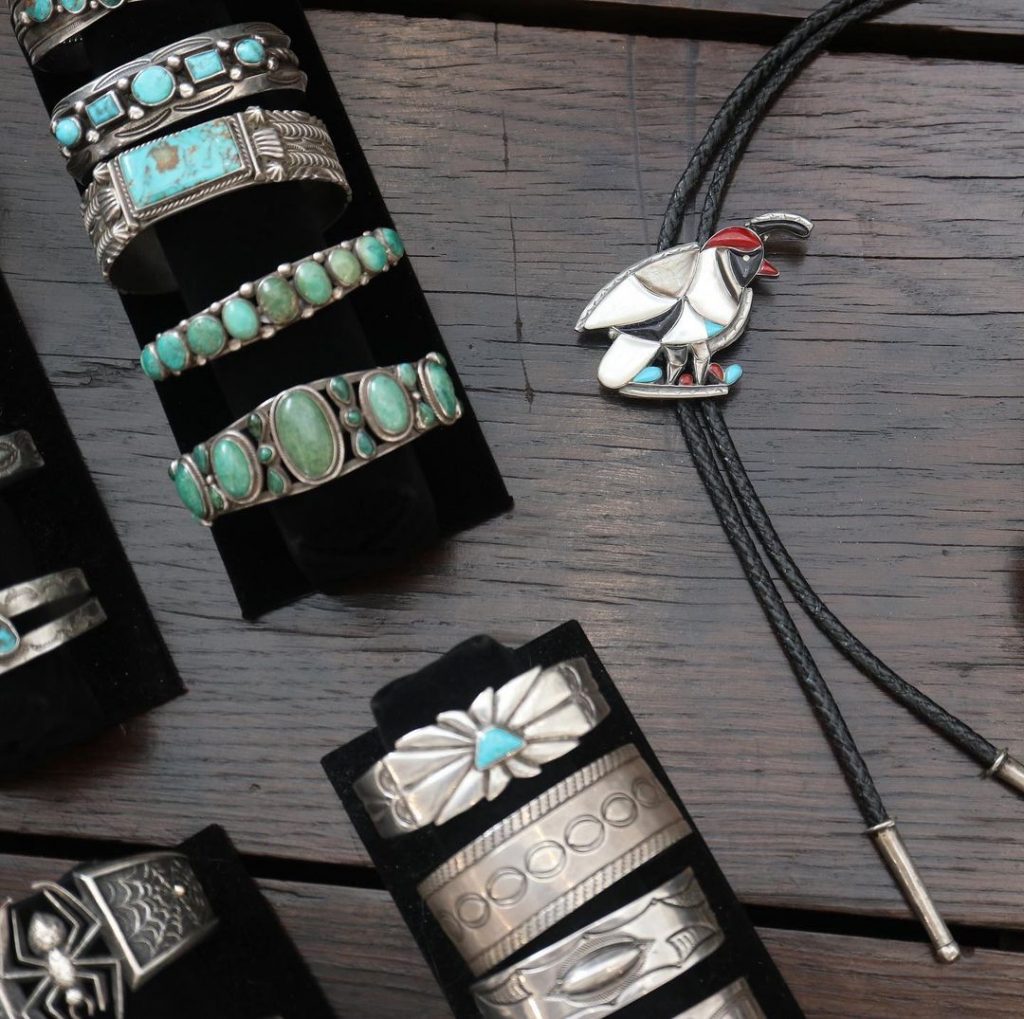 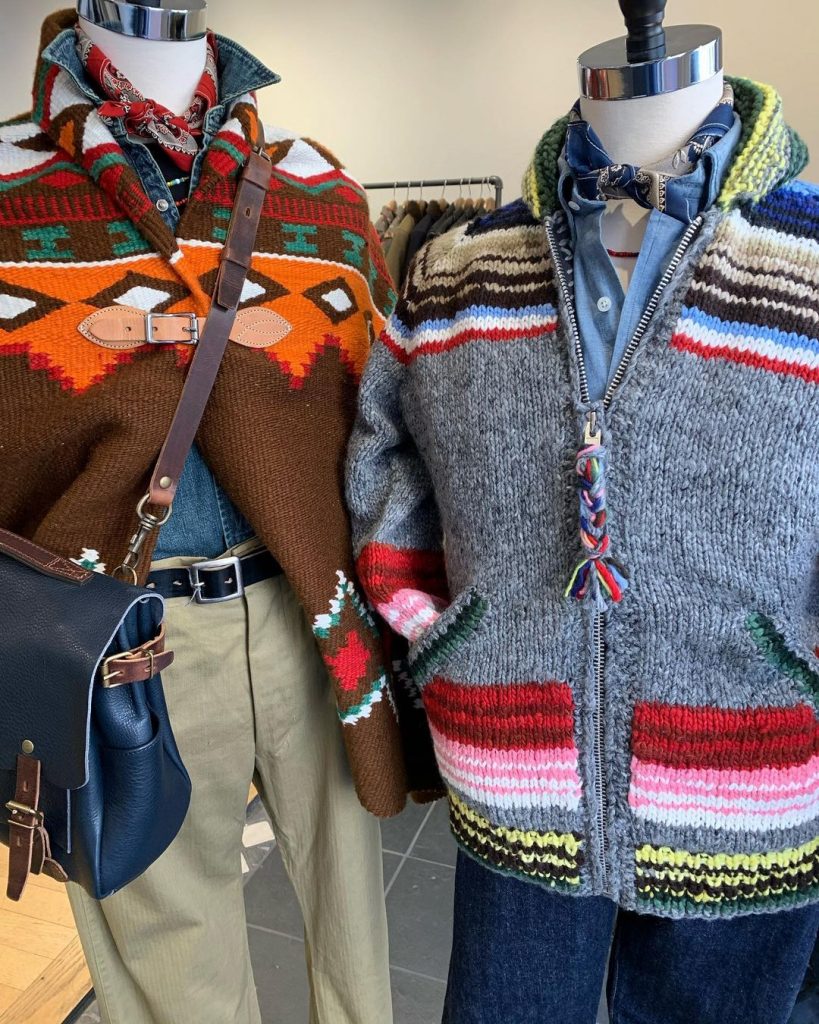 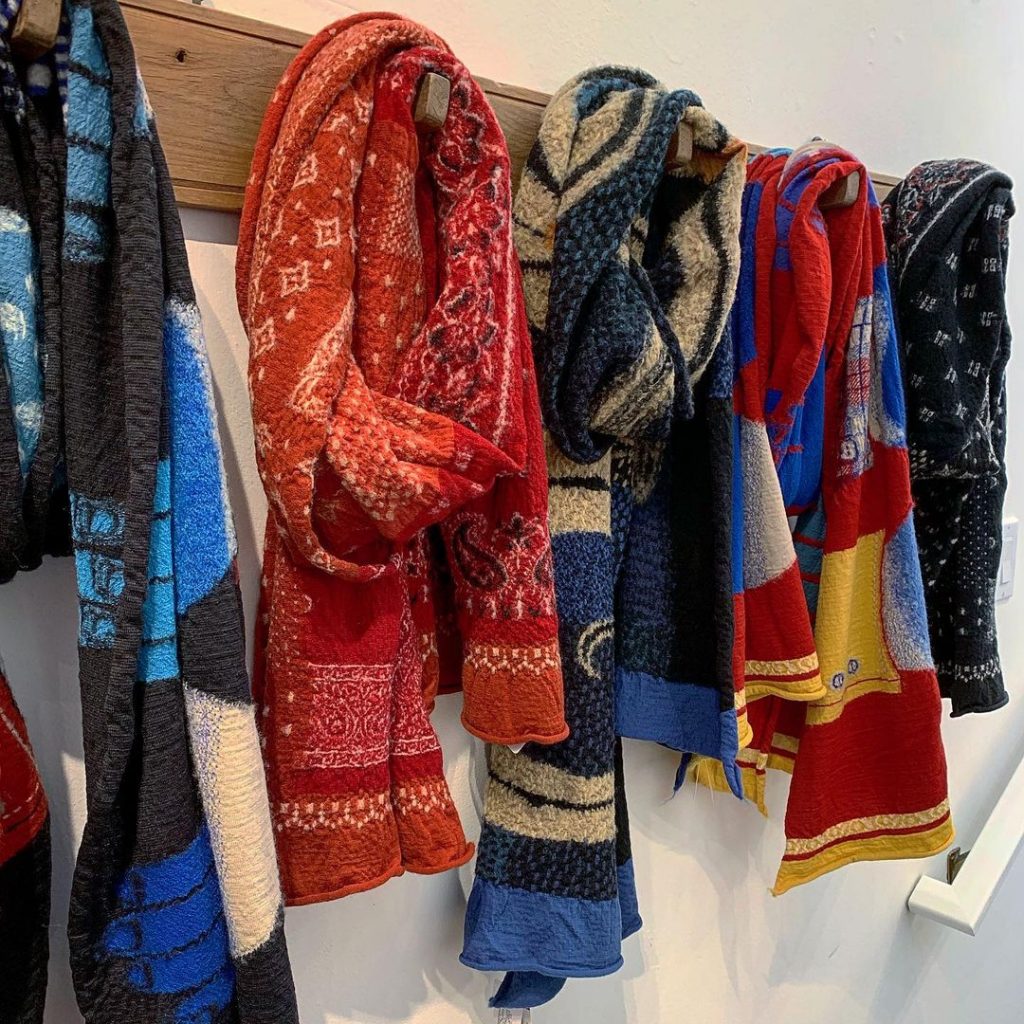 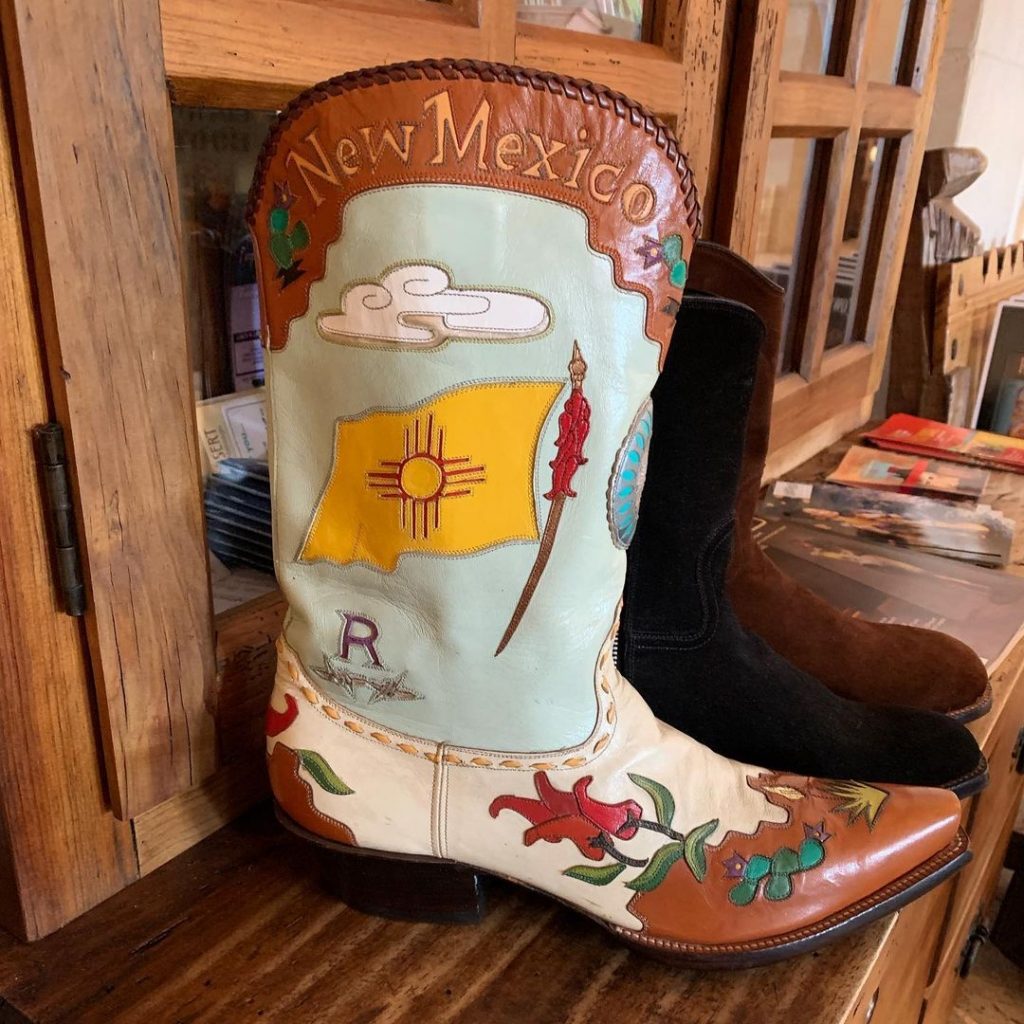 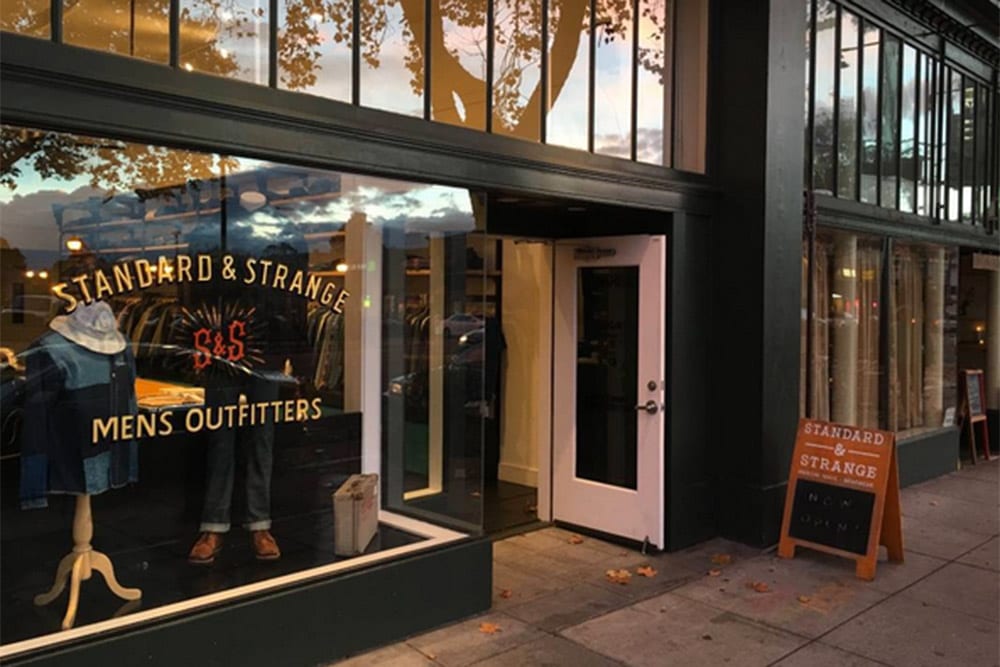