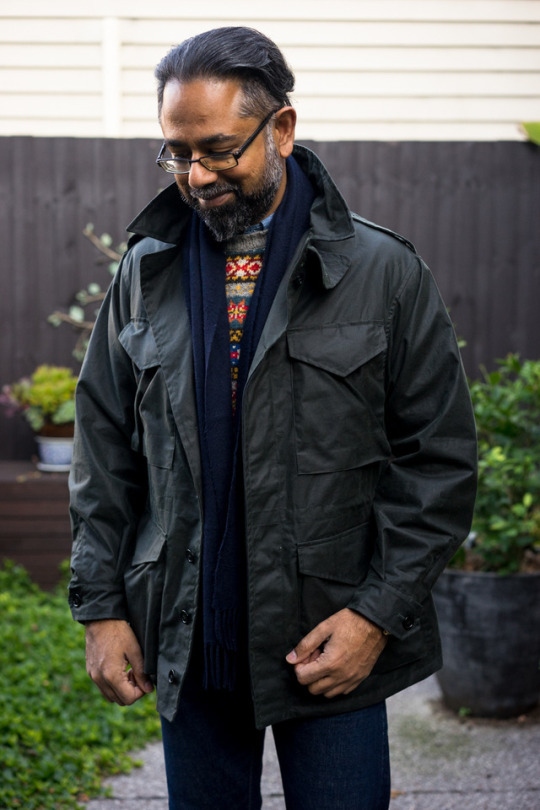 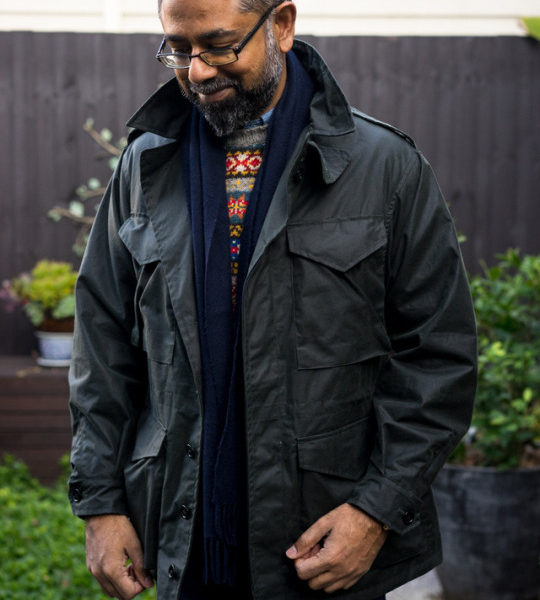 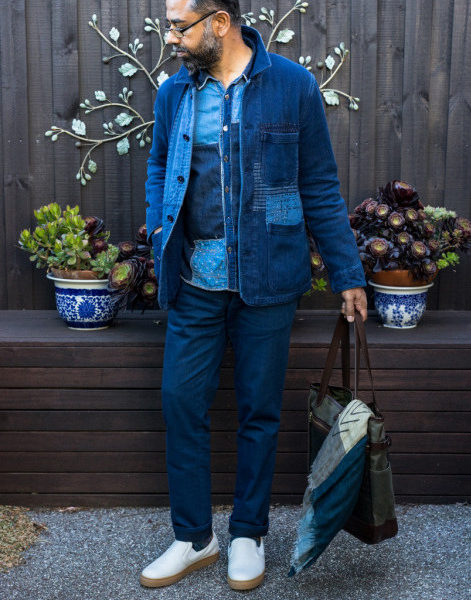 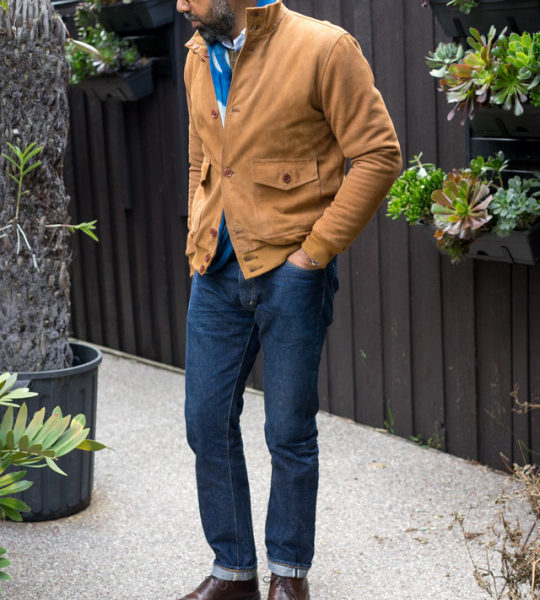 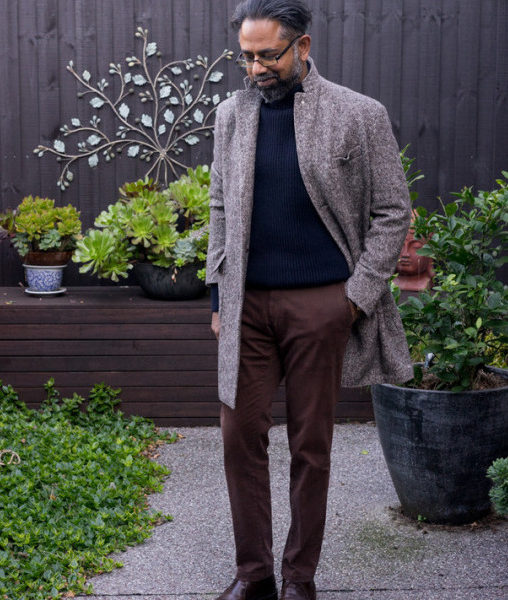 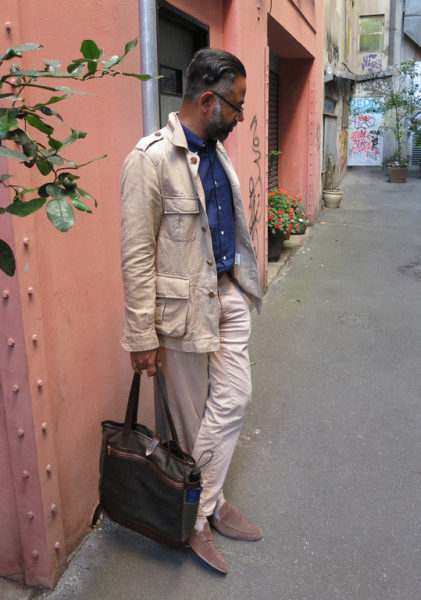 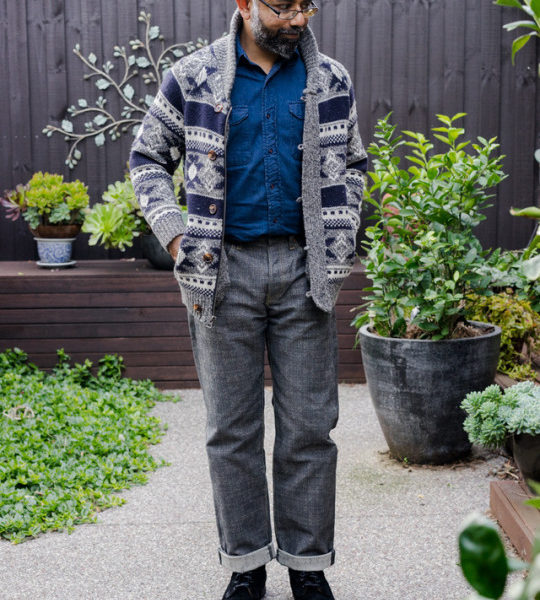 Everyone loves complaining about how men dress these days. Everything is too sloppy or ill-considered; nothing fits well; things are either too trendy or not trendy enough. All of which is true, but here’s the thing: as the suit has become less relevant, it’s increasingly hard to dress casually but well.

This isn’t true for tailored clothing because – while it’s nice to wear sport coats and suits in interesting ways – you can look perfectly good in boring clothes. No one will ever go wrong in a dark suit, white shirt, and dark tie (so long as everything fits well). This is something a lot of guys miss, so they’ll ruin an otherwise perfectly good ensemble with gimmicks and novelty accessories.

With casualwear, there’s a lot more overlap between the boring and the terrible. You won’t look bad a pair chinos and a button-up, but you won’t look great either. Swap the shirt out for a short-sleeved polo, and you have the visual representation of “yes, I’m the manager.”

So, how do you strike a balance between the interesting and wearable? In today’s world, where dress codes are so open and subjective, that’s a hard question to answer – a lot depends on your environment, lifestyle, and taste. That said, I like what Gerry in Melbourne wears. Much of what you see here are things we’ve recommended for years – field coats, raw denim jeans, leather jackets, safari jackets, Fair Isle sweaters, work boots, chukkas, etc. – but Gerry combines things in interesting ways. Some lessons I think can be drawn:

Smartly Use Textures and Patterns

Texture can be a more sophisticated way of making a statement than bright colors or loud patterns. Gerry here, for example, uses materials such as waxed cotton, napped suede, and ribbed corduroy to liven up his casualwear. And instead of your plain, boring merino v-necks, he chooses more textured pieces, such as chunky turtlenecks and prickly Shetlands (a move we’ve recommended in the past).

Similarly, you can use patterns to the same effect, but Gerry suggests pairing them with mellower pieces. “Balance is key,” says Gerry. “If you want to wear a patterned scarf or a Fair Isle sweater, consider keeping everything else muted.” For me, I usually try to wear no more than two patterns at once. That’s enough to keep things interesting, but not so many that you risk looking like a 1970s disco model.

Not everything has to be obsessively slim fit. Some of Gerry’s clothes fit a bit looser, which allows him to create more interesting silhouettes. The waxed cotton field jacket from Drake’s is a touch boxy; the Kapital Century-denim jeans a bit full. The tan corduroy suit from Engineered Garments is also lumpy – but cut intentionally so, which makes it look casual and charming.

Gerry says, “I think fuller cuts work if everything flows. For coats, don’t just go up a size or two, you need to make sure the shoulders and sleeves still fit. I’ve also grown to like looser trousers, but prefer them with similarly loose tops or jackets. If you’re wearing fuller-cut pants, it helps to have chunkier, rounded toe shoes. If the footwear is too sleek, things look imbalanced.”

Go for a Low Contrast Combination

Gerry is really good at creating low-contrast, tonal combinations – black leather jackets with charcoal jeans, or denim trucker jackets with navy wool sweaters. The key to tonal outfits is to get your contrast from something other than color (e.g. texture, pattern, or sheen). Wool, linen, and cotton all reflect light in different ways, which means even if they’re similar in color, there can be a lot of variation and visual depth.

If you feel uncomfortable with going full monochrome, try varying just one thing. Gerry uses an olive turtleneck sweater to anchor his black leather jacket with charcoal jeans, then a French blue shirt to tie together a beige safari jacket with off-white chinos. You can do something similar with contrasting outerwear. An all-gray outfit looks great sitting underneath an olive coat.

I’ve gone on record as being a fan of J. Crew, but on some level, it helps to try more interesting brands (something besides the basics you find in every mall). “I really like Engineered Garments, Blue Blue Japan, and Kapital, each of which offer quirky takes on workwear,” says Gerry. “For example, Engineered Garment’s Bedford jacket looks like a casual sport coat, but turn up the lapels and it’s a different look.”

Of course, that gets back to the original challenge: learning how to dress in a way that’s interesting, but also makes you feel socially comfortable. Gerry’s advice for guys who want to be more adventurous:

“Learn from people you admire and take baby steps. On Instagram, I get inspiration from olof1982, christiankimber, cotton_dockers, maxymylyan, cazjl, erikmannby, urbancomposition, theurbanhippieswe, independencechicago, and anatomica_tokyo. Drake’s last few autumn/ winter lookbooks have also been great. Eventually, as you get exposed to great dressers, you’ll start to develop your own taste and have more confidence in your instincts.”