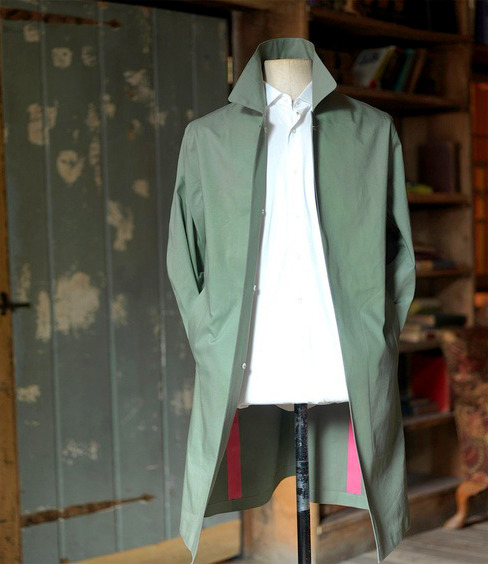 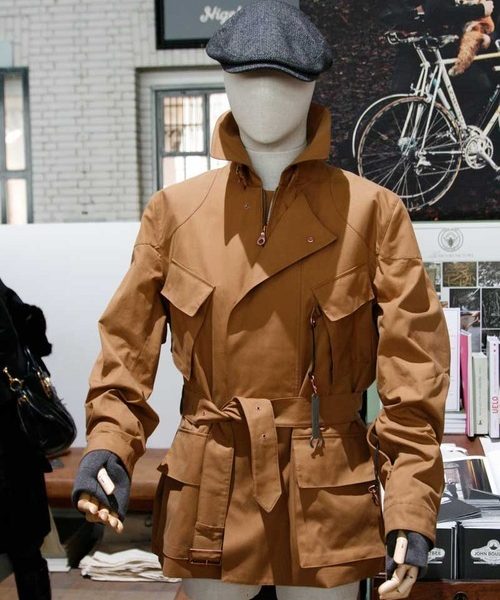 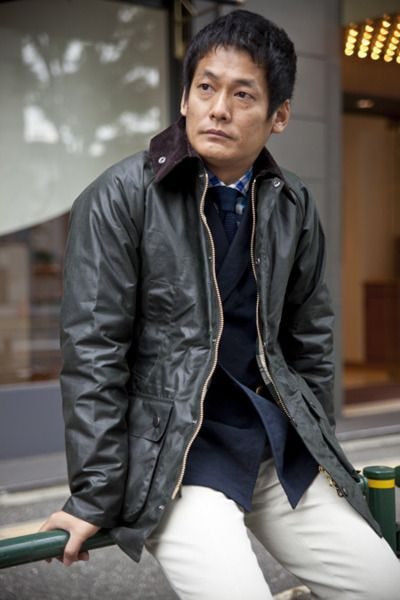 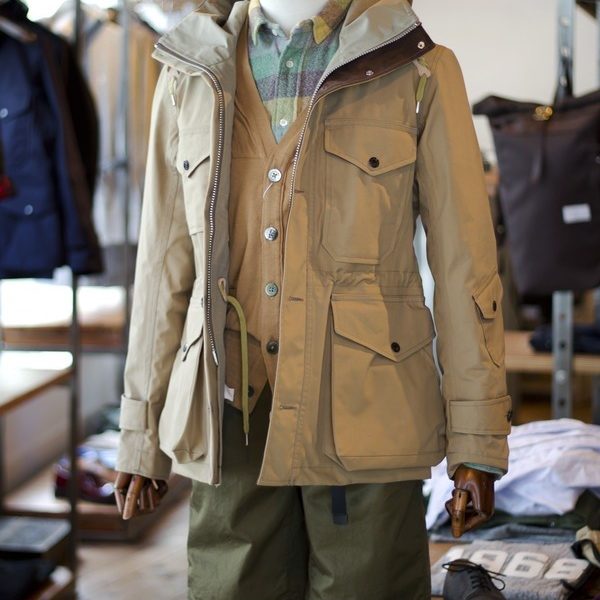 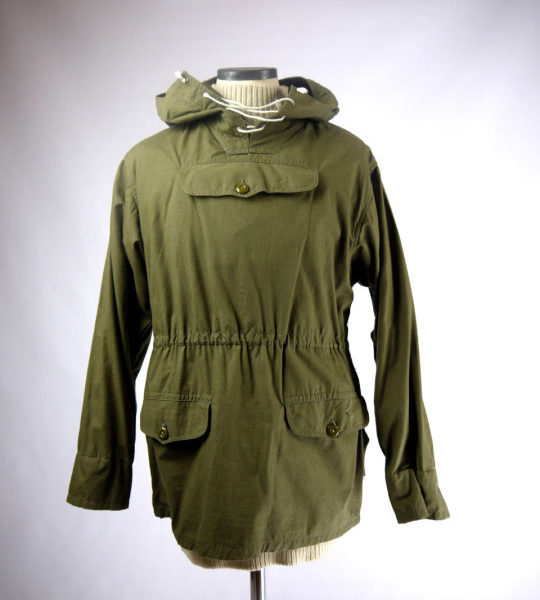 Every year starts off with a few months of bad weather. First there’s snow, then snow turns into slush, and finally the slush gives way to showers. I’ve been looking forward to wearing linen suits and leather slip-ons this season, but before any of that happens, there are still a few weeks left of rain. Which means it’s good to have a reliable raincoat this time of year.

There are two things to look for when shopping for a raincoat: the style and material. Dressier styles, such as cotton gabardine trench coats, go well over tailored clothing, although I favor things that are intended to be worn more casually or can do double duty. A quick review of some styles I’ve found helpful, along with a description of how the materials perform in spring conditions.

If you’re looking for something versatile, start with macs. The simple, single breasted design differs from trench coats in that it doesn’t have any militaristic details, such as D-rings, storm flaps, or epaulets. I also find it transitions better between tailored clothing and casualwear, whereas trench coats only feel right to me over suits and sport coats.

Mine is a bonded cotton model from Mackintosh, a British heritage company that’s known for their rain gear. Bonded cotton means that two pieces of tightly woven fabric are bonded together using a rubber adhesive. This makes the coats incredibly waterproof – especially when the garment is further taped at the seams – but it’s also not very breathable. Bonded cotton will rustle like a sail, which has a certain kind of charm, but it’ll hold hot air like one too.

I like Mackintosh’s bonded cotton coats for their unique feel (the stiffer material drapes and moves in an interesting way), but if you need something cooler wearing, you’ll want to turn elsewhere. Check the company’s poly-blend coats, American Trench, Aquascutum, and TM Lewin. They’ll wear a little more comfortable in those spring temperatures above 50 or so – especially if you’re layering.

Brooks England is mostly known for their bicycle seats, but years ago, they had a short lived clothing line in conjunction with bespoke tailor Timothy Everest. The star of the collection was something they called their Criterion jacket – a piece of cycling outerwear made with tons of unique pockets and top-end trims. Unfortunately, the line has been discontinued, save for some boring ponchos, so that Brooks can focus on PEdAL ED (that line is super cool, by the way). Every once in a while though, you can catch a Criterion jacket floating around on eBay.

I bought one before they closed the line and love using it on rainy days. It’s a shorter design, so not that great for heavy rain, but perfect for light showers. The body of the coat is made from Ventile – a densely woven, pure cotton fabric that swells up when wet, which closes up the pores and doesn’t allow any water to seep through. That means the coat will soak up water, but it’ll still keep you bone dry.

The best thing about Ventile is that it has a soft, natural feel, and it won’t rustle or make much noise when you move (supposedly, the British used it in WWII for this reason – today it’s mostly good for sneaking up on co-workers). Unlike many options on this list, it also doesn’t look like rain gear, which allows you to use it on cool, dry days. Of course, Brooks isn’t the only company that has used Ventile. You can find other options these days at companies such as American Trench, SEH Kelly, and Private White VC (the first is even having a sale).

Another great option if you value versatility. A waxed cotton Barbour can be worn with suits, sport coats, and almost any kind of casualwear. They’re also good year-round – as comfortable on spring days as they are on autumn nights.

We have a full Barbour buying guide here, but most people will find themselves interested in two main models, the Bedale and Beaufort. They have small differences, but it’s mostly about the length. The Bedale is a shorter jacket that works well with casualwear; the Beaufort is a bit longer, which allows you to layer this over sport coats. I like both, but prefer the Beaufort.

The downside of waxed cotton? Aside from some quick wipe downs, the material isn’t that easy to clean – especially when it comes to getting out gross smells. You also need to re-apply the wax every once in a while to maintain the water repellence. There are places that can help you with this, but they’re expensive.

Nanamica is a Japanese company that makes a bunch of great clothes for bad weather conditions. Their flagship outerwear is this Gore-Tex Cruiser parka, which they’ve done over the years in a ton of different colors. It has a bunch of great details – such as taped seams for extra protection – but I mostly like it for its silhouette. The high-stance collar and slightly boxy fit just looks really interesting when worn.

The coat is admittedly very expensive, partly because it’s a niche Japanese brand, but also partly because they use Gore-Tex – a branded membrane that’s typically sandwiched between two materials to help with both breathability and water resistance. Gore-Tex is nice in that it helps keep water out, but also lets heat vapors escape. However, it’s as much about marketing these days as it is about performance. There are much better performing fabrics at this point, including softshells and advanced membranes such as eVent. Plus, Gore-Tex’s breathability will always be limited by the outermost layer.

Consider Gore-Tex if you want something a bit more breathable than waxed or bonded cotton, but look elsewhere if you think you might be doing some serious aerobic activity.

A lot of the options above are on the expensive side. We’ll cover some more affordable pieces on Wednesday, when our series continues, but here’s the most affordable option of all.

For easy rain gear that won’t cost you more than a few bucks, pick up a can of Nikwax or Revivex – both popular brands for what’s known as durable water repellant sprays (or DWRs). They come in two forms. One is a wash-in solution, which you throw into your laundry machine along with the item you want to make water resistant. The other is a spray on, which allows you to be a bit more targeted (and what I prefer). Apply a few layers around high-wear areas, such as the shoulders, but keep it away from internal fleeces, where you want the material to wick moisture, rather than repel it.

I’ve used Nikwax on an old Army smock. The solution doesn’t do magic, but it gets pretty close. Since the seams aren’t taped, water can still seep through, but the body stays remarkably dry even in heavy rain. The only caveat is that the spray loses its effectiveness when the garment gets dirty, so you’ll want to only apply this to freshly washed clothing, and then re-apply every twenty to thirty wears. For about $15, you can’t do much better.