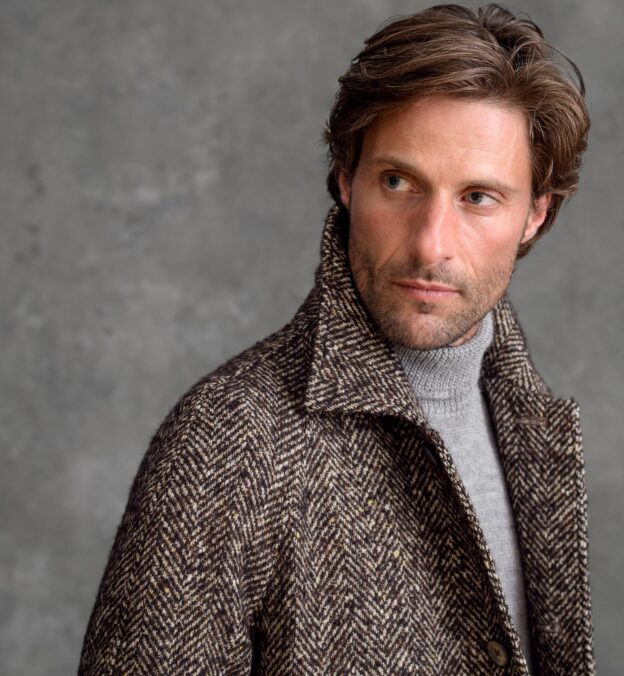 As an independent menswear site, we couldn’t be more grateful for having companies who support our work. So, twice a month, we like to give them a special shoutout. Doing so allows us to thank them for their support, as well as update our readers on our sponsors’ latest happenings.

A couple of years ago, I attended an Anderson & Sheppard trunk show in San Francisco. After thumbing through some fabric books containing sturdy British tweeds and cheerful Italian jacketings, I came across some interesting overcoatings. I hadn’t come that day to buy an overcoat, just a jacket, but the fabrics in that specific book were so beautiful, they still stick out in my memory today. Made from a spongey alpaca-wool blend, these fabrics were woven for Draper’s by Vitale Barberis Canonico. The most beautiful thing about them was the weave: chunky, oversized herringbones made with a distinctively mottled yarn.

This week, our sponsor Proper Cloth has a pre-order up for two new fall/ winter overcoats. These are made with a four-button front, raglan sleeve design, and a belted waist to give the jacket some shape when worn. They come in two materials — a navy wool-cashmere twill, and a mottled wool-poly herringbone that looks awfully like that fabric I saw at Anderson & Sheppard’s trunk show. Drake’s used the same fabric, but in a different color, for a green Balmacaan coat two years ago. While the Drake’s version retailed for about $1,500, Proper Cloth’s version is $800. Wear one over a chunky sweater, which you can pair with either tailored trousers or jeans. Proper Cloth also has some new fall/ winter shirt fabrics this season, including some Japanese chamois and country plaids designed for casual wear.

There are three things you should look for in a dress belt. The first is whether the edges have been stitched down. Some belts, such as those cut from bridle leather, are often left plain or scored. Then there are finer calfskins that are stitched down using at least two pieces of leather. Neither is better or worse, but it’s a subtle detail that will make an impact on how you look. The second is how the belt has been lined, assuming it’s lined at all. Cheaper belts are made from reconstituted leather or even paper. Higher-end belts are lined with quality leather. Finally, and perhaps most obviously, you should find belts primarily made from full-grain leather (meaning, for the parts that face the world).

Dapper Classics’ offers a range of high-quality belts made from full-grain Italian calfskin leather, a soft nubuck liner, and a metal roller buckle with a nickel finish. Produced in Pheonix, Arizona, these belts measure 1.5″ wide and come in three colors — brown, cognac, and black — to match nearly any shoe. Normally, they cost $95, which is already well below what other companies charge for American-made belts. But until tomorrow, you can knock 25% off with the checkout code BELT. That brings them down to just $71.25. 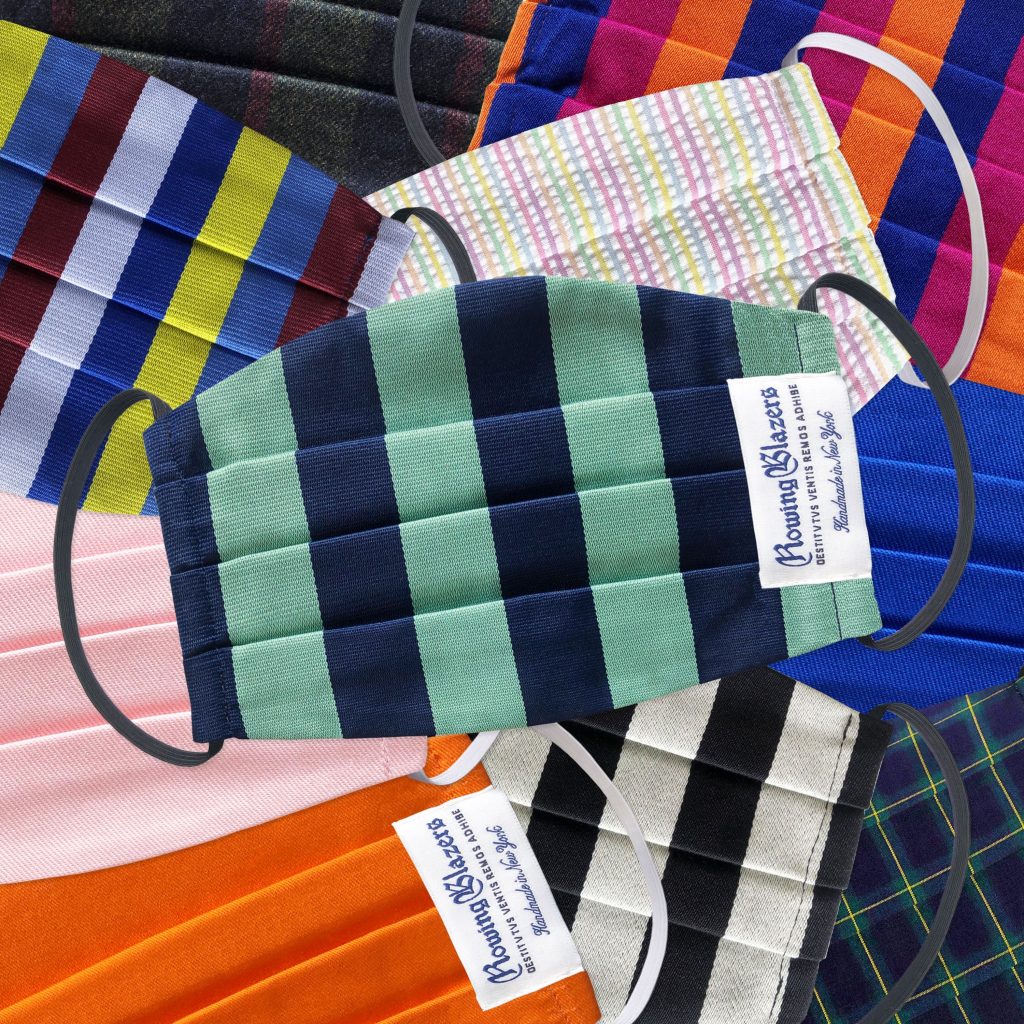 The Center for Disease Control and Prevention has found that a simple cloth mask can dramatically reduce the spread of the coronavirus, both in terms of transmitting the virus and exposing yourself to it. To be sure, no one likes wearing a mask — they’re uncomfortable and often don’t look very good — but they’re also a way to keep people (and yourself) safe. Our sponsor Rowing Blazers has improved them a bit by making colorful ones using leftover scraps of blazer, suiting, and shirt fabrics. Produced in New York City’s famous Garment District, they can add a bit of cheerful color to an outfit. These are also reusable, unlike the single-use masks that will likely wind up in our landfills. Just gently dip them into soapy water after each use.

Rowing Blazers has undertaken other efforts to upcycle scraps of unused fabric in the past — using small pieces of “wastage” that would typically be thrown away after a production run to produce its American-made “End-of-the-Day” rugby shirt program. “I’ve always been a big advocate of using the leftover scraps of fabric from anything we make,” says Rowing Blazers founder Jack Carlson. “As someone who came into this industry from a completely different world (sport and academia), I was horrified to see how much waste the industry produces. So as soon as we had the green light to start making masks, I knew exactly what we were going to do.” 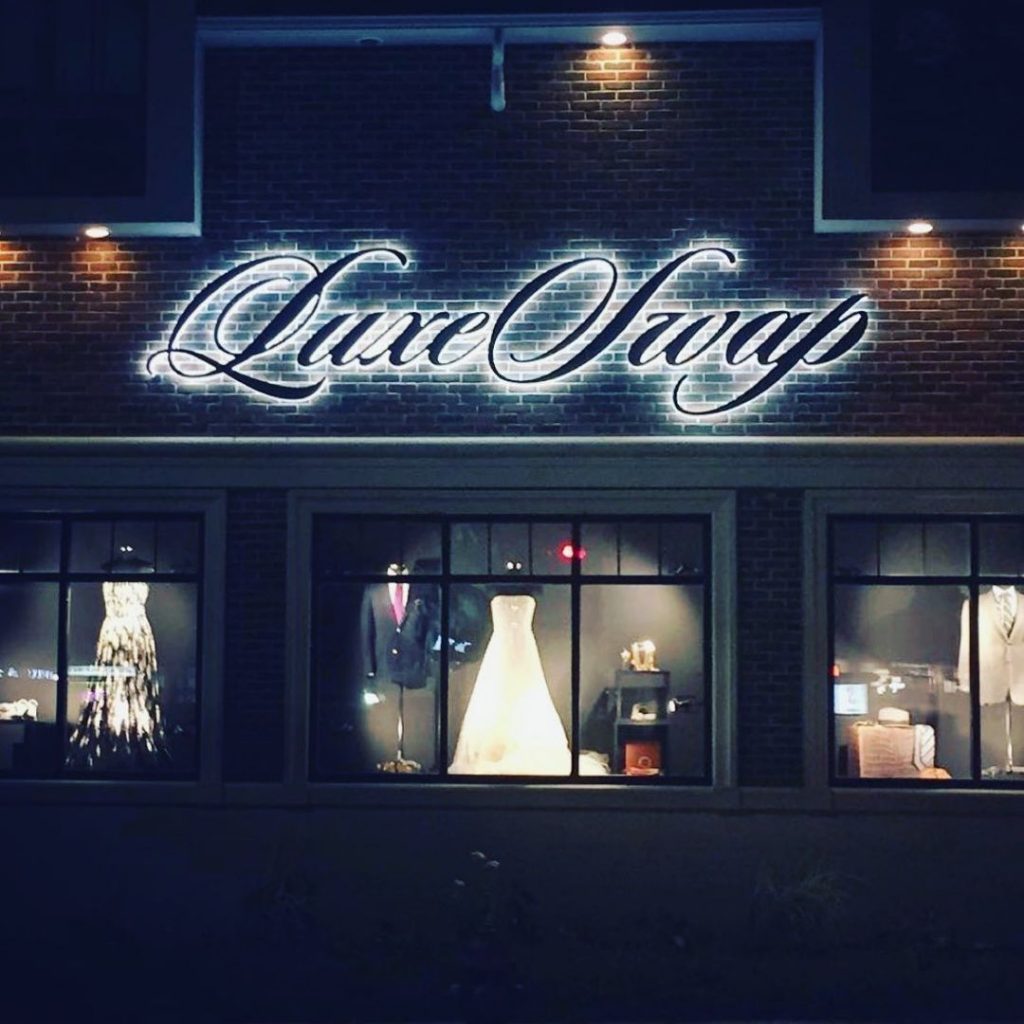 Black Friday is upon us, but before you go shopping at a retailer, keep in mind that LuxeSwap is doing their famous after-Thanksgiving blowout. Every year after Thanksgiving, they list the best of the best online through a series of 10-day eBay auctions. These are things that they’ve been saving for a while just for this occasion. Since these auctions start at just $9.99, and the final price will be whatever it is when the gavel strikes, you can get much better details on new and second-hand clothes than you can at any retailer. Prices are often well below even end-of-season markdowns.

Here’s a tip before you start. After Thanksgiving, the list of auctions will likely be huge. If you want to help narrow in on things you’re specifically interested in, use eBay’s filters on the lefthand side of their site. You can use them to home-in on just ties, outerwear, or shoes, and then narrow them some more by using the brand filters further down on the site. In this way, you can quickly find things that you’re interested in.