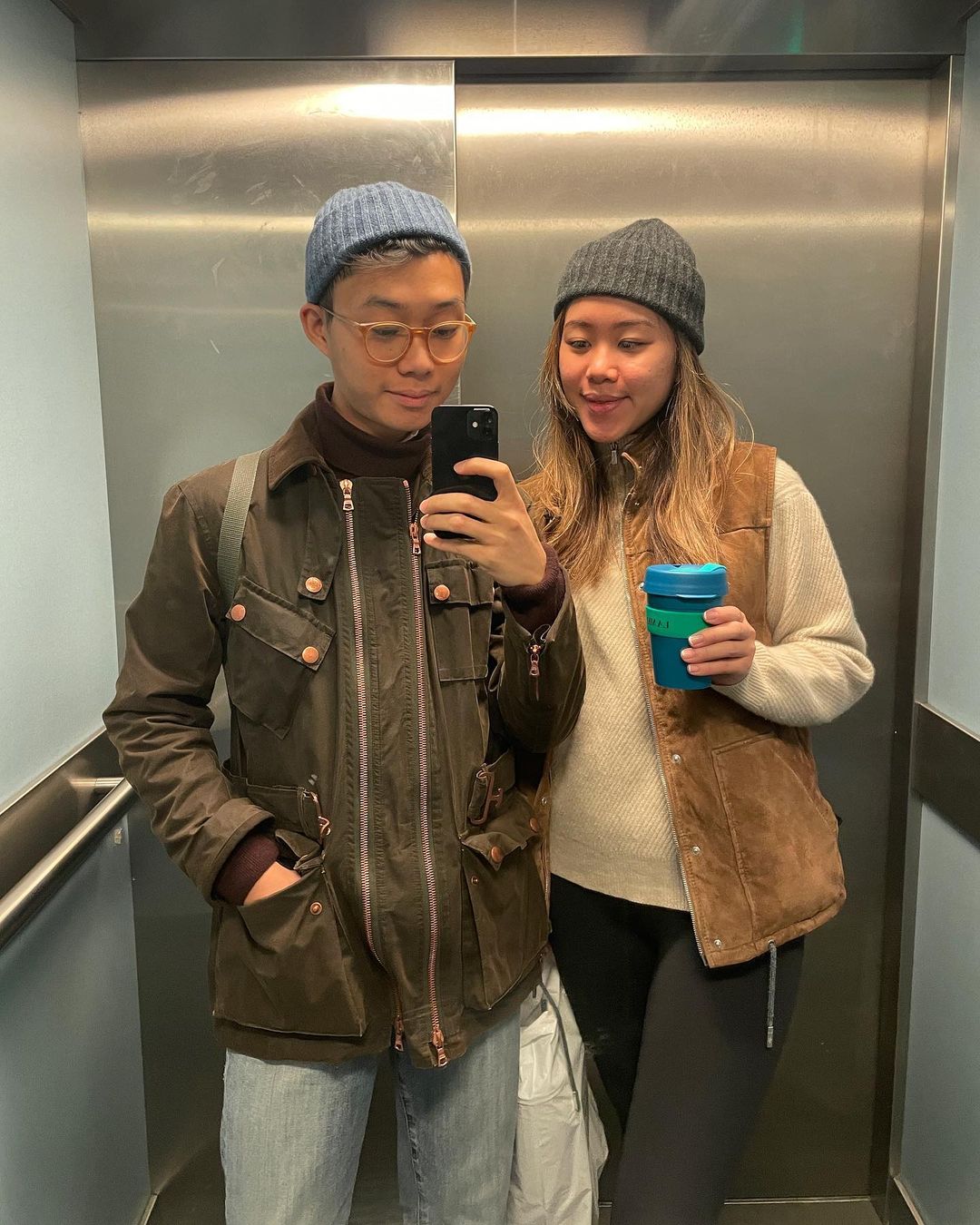 Some people love to match their clothes with their partners’ — others detest the idea, finding the effect twee, or even creepy. While I cherish sharing life’s pleasures with my spouse, dressing like twins isn’t one of them. Outside of Halloween costumes, I’ve always felt there’s something off about those couples who dress in identical Rick Owens shrouds or painted Bodie ensembles. The impression is that they’ve melded not just their wardrobes but their very psyches.

The problem is that during the pandemic, those of us with live-in partners have all spent so much time together that, naturally, our tastes have begun to merge. For autumn, my wife bought herself some Paraboot loafers that I’d been coveting for years. When I saw her prancing around the apartment in her new, thick-soled stompers, I was overcome with jealousy. On her feet, they looked like little black hooves, so elegant in their ugliness, a perfect complement to her loose black trousers and denim duster. I hated to admit it, but they looked better on her!

With this realization, I had to accept the fact that as long as my wife was wearing her pair, I’d be forgoing mine. The alternative would be to each have our own set, and then coordinate who was wearing them when. Perhaps Google Calendar could work for this shared custody arrangement, but I sensed that was a bridge too far. I decided I’d be magnanimous and wish her well on her new purchase. I even waterproofed them for her.

This experience got me wondering about other clothes-loving couples, and how they navigate sharing their favorite things (or not). I wanted to know whether they embrace the idea of “matching” or avoid it, as I do. So I reached out to two well-dressed couples — each with their take on the subject. 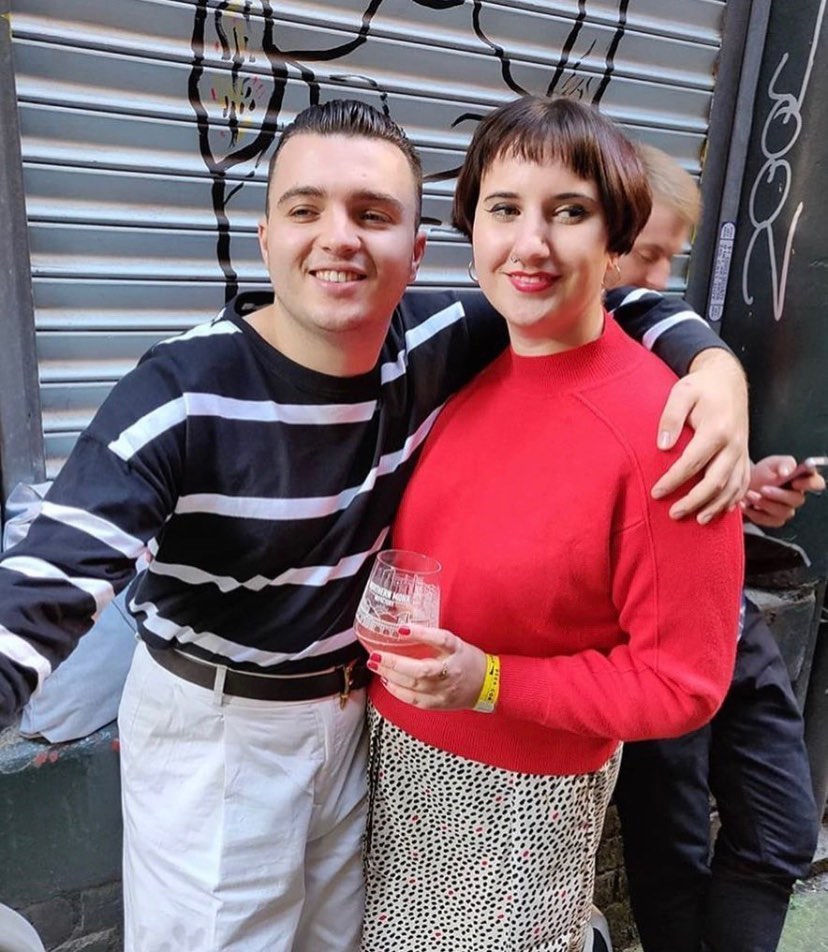 The first couple I spoke with was Will and Rachel, both in their twenties and living together in Yorkshire. Because Will is a nurse, his work uniform involves scrubs, but outside the hospital, he favors clothes with wild prints or unusual details from gorp-core brands like Patagonia, Gramicci, and Mont-bell. Rachel is a civil servant who tends toward practicality in her wardrobe. Lately, however, they’ve both gotten into “rambling,” so their new favorite clothing shop is Go Outdoors, the British equivalent of REI.

Of the two, Will is the more style-conscious and an especially keen thrifter. When the couple first met, “The way he dressed was definitely one of the things that pulled me in!” said Rachel. At the time (about ten years ago), Will was sporting a sharp, 1960s mod style. “He wasn’t afraid to look different, and I was attracted to that.”

In the early years of their relationship, Rachel says she tended to mirror Will’s look with ‘60s short straight skirts, tights, and turtlenecks — but these days, she’s steering away from flashy or overly tight pieces. “I value my comfort and being able to mix and match my clothes.” Rachel borrows from Will’s closest on occasion, but there are a few pieces she won’t touch, either because they’re too unique to Will (like his vintage Budweiser bucket hat) or because the item “is not my thing whatsoever.” 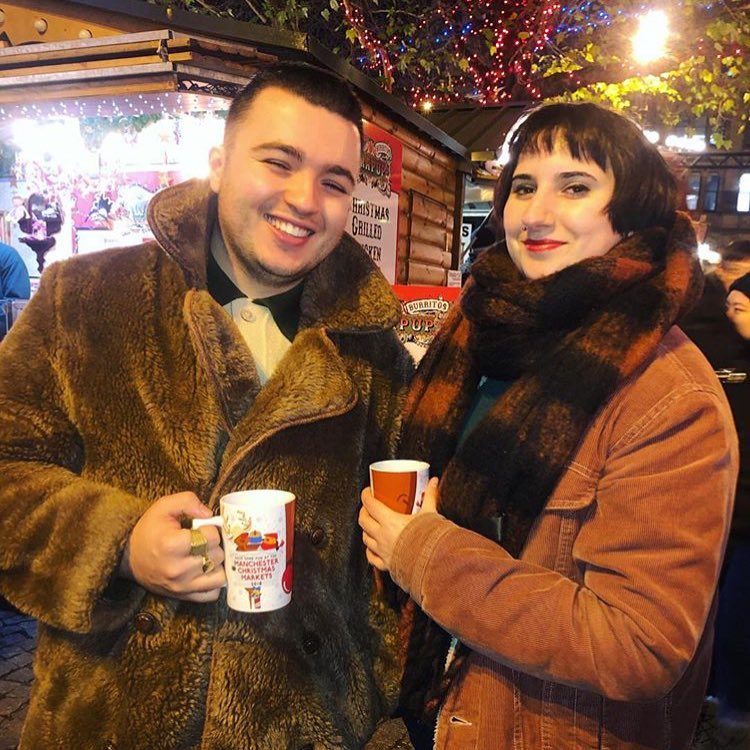 “I can never hide my dislike for it, but fortunately, Will never minds!” she says. “I’m thinking of a particular salmon jacket.”

When it comes to matching, Will grudgingly admits that “coordination happens from time to time when we leave the house.” The problem, he explained, was that they both like similar palettes (greens, blues) and similar gender-neutral styles (Breton stripes, three-quarter fleeces). “It does sometimes drive me nuts, so I’ll deffo change!”

Though she can find Will’s choices a bit odd, she’s glad he’s been willing to share his passion for jawnz with her, as it’s changed the way she thinks about clothes. “Until I met Will, I didn’t know much about fashion at all.” 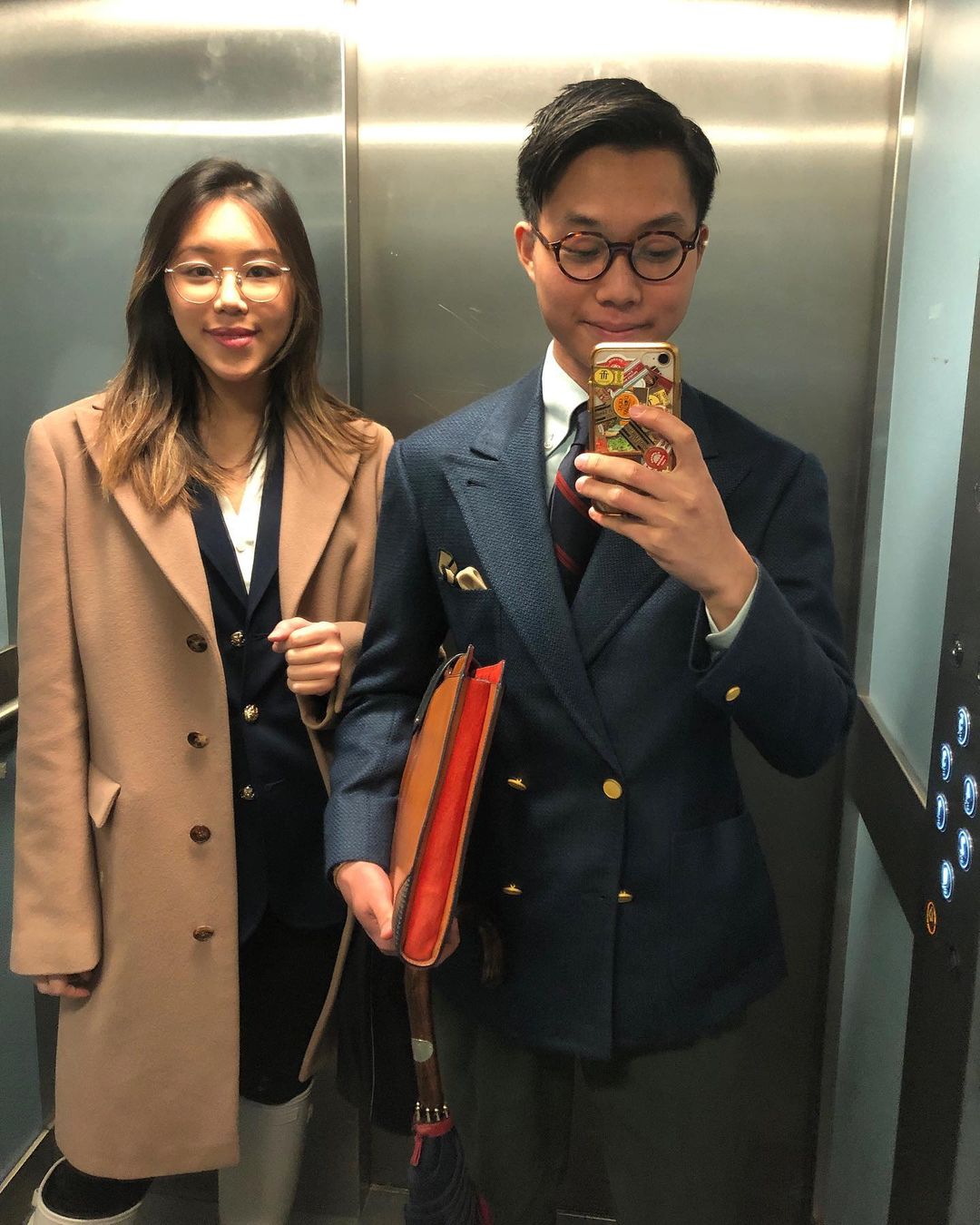 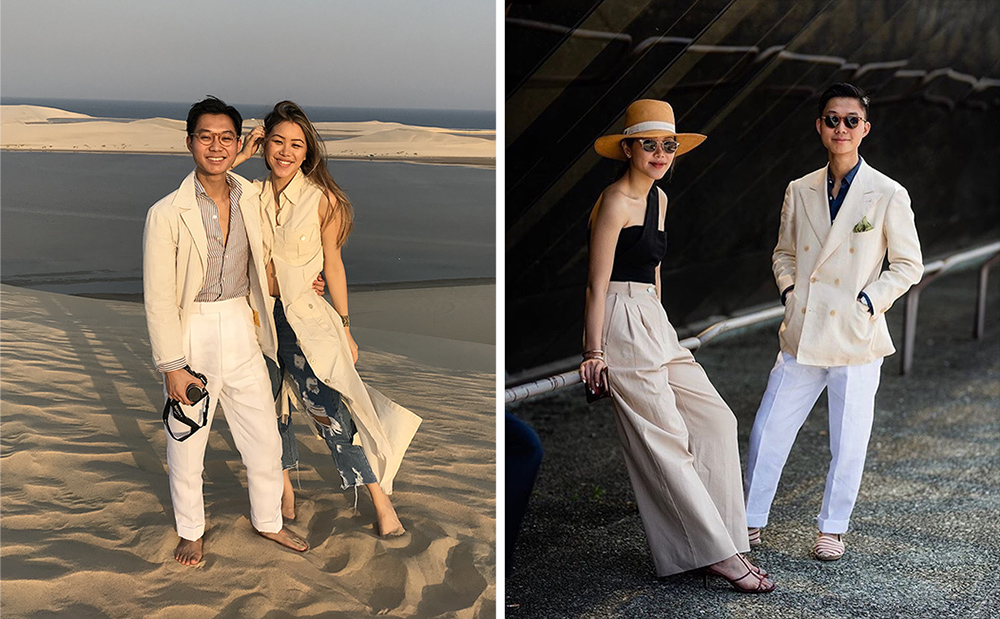 My next stop was a conversation with Buzz and Vanessa — both of whom work in fashion and beauty. Buzz is the founder of bespoke tailoring firm The Anthology, and Vanessa does digital marketing for Jo Malone. I wondered whether a more style-conscious couple would have more boundaries or fewer, but was surprised to find many of the same dynamics that Rachel and Will negotiate.

Since I’m living outside London these days, I decided to meet up with the pair in person for some udon noodles. Buzz was wearing a fuzzy, rust-colored sport coat, white flannels, and a turtleneck with an oxford shirt collar poking out, while Vanessa was dressed in wide flowing trousers, a black asymmetrical top, and had a large coat draped around her shoulders.

Vanessa describes Buzz as “classic as it gets” while Buzz says his girlfriend is “feminine and sophisticated.” During the pandemic, when wearing a suit went from quirky to oddball, Vanessa has enjoyed “seeing Buzz relax his dressing style [and] introduce more casual clothing into his wardrobe.” Unstructured shirt jackets, knit shirts, even drawstring trousers have all made their way into his rotation (and are now on offer from The Anthology). 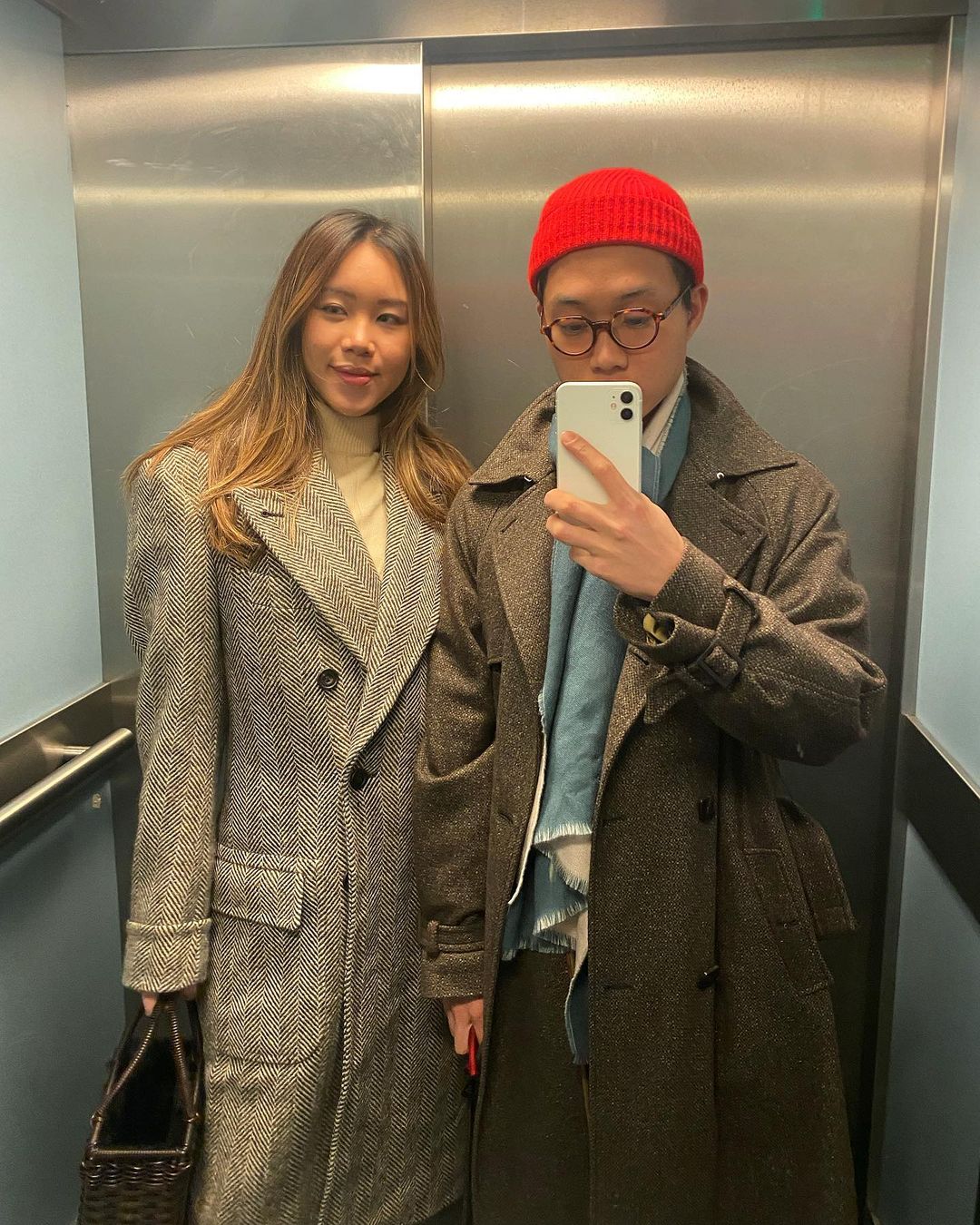 When it comes to matching outfits, Buzz believes it’s ok to both wear neutrals or blacks, but you shouldn’t show up to the function in the same shade of something loud, like Kelly green or bright red. The trick for achieving coordinated but not matchy looks, he says, is to focus on “a complementary color tone” rather than “couple-twinning t-shirts or monogrammed scarves.”

For this couple, sharing is almost too easy, as they wear the same size shoes and are close in height and weight. Vanessa likes to try one of Buzz’s double-breasted jackets for what Buzz calls “a powerful ‘boss lady’ look,” while occasionally, Buzz will try out Vanessa’s oversized coat “when it works.” The truth, however, is that Vanessa gets a lot more out of Buzz’s closet than he does hers.

“He has yet to wear any of my dresses, whereas I’ve pretty much raided his closet,” she told me. There was, however, one caveat. “I do have to follow one rule — no spilling anything!”

Filed Under: Buzz and Vanessa, Coordination, Couple Dressing, The Anthology, Will and Rachel