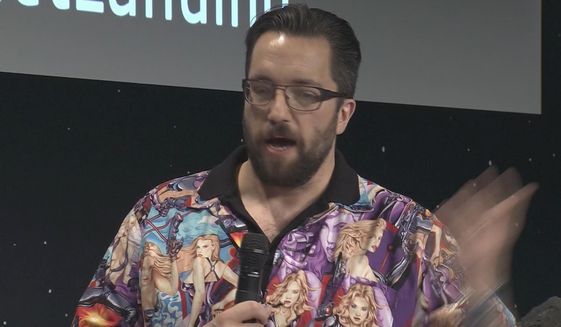 Earlier this week, we posted about this guy, a British scientist named Matt Taylor. Why? Well, it’s probably pretty obvious. The picture above is Taylor answering press questions at Philae landing event, and he (for some reason) chose to honor what’s probably the high point of his career by wearing a bowling shirt covered in scantily-clad women.

Why’s that a problem? Well, there are basic sartorial reasons, the kind of thing we might write about on our blog if it were targeted at guys who land spacecraft on comets. Like it’s a horribly ugly shirt, and it’s completely unsuited for such a momentous occasion. The real reason, though, is that engineering is a field that’s historically been hostile to women, and to wear a sexy ladies-themed shirt on so public a day as that one sends exactly the wrong message. A message that crosses from distasteful into nasty.

But this is a post about what he did right.

He said: “I made a big mistake and I offended many people, and I’m very sorry about this.” And he even cried, which there’s no reason to believe was a show.

That’s a really decent thing to do.

I’m reminded of my friend Jay Smooth’s video How To Tell Someone They Sound Racist. When you’re accused of bias, it’s easy to assume your humanity is under indictment, and not your actions. The kneejerk reply is to say, “I didn’t do something sexist, because I’m not a sexist.” In other words: to have done something wrong, you have to have been malicious. Not just have had malicious intent, but to be fundamentally evil. And since none of us think we’re evil, we can’t have done something wrong.

Much harder is to say, “I don’t believe in sexism, and for that reason, I apologize for my mistake.” To recognize an error and to accept responsibility for behaving differently in the future is a brave thing to do. That’s what Taylor did, sincerely, and I tip my cap to him.

Here’s the thing: when you have the upper hand in society, it’s easy to leave your decisions unexamined. It’s easy to assume something is neutral that’s actually hurtful to others. If Taylor were one of two or three men on a team with fifteen women, those circumstances would have made him to think about what effect wearing that shirt would have. Odds are, though, that the numbers were reversed, that there were many more men than women. That circumstance never asked him to examine his assumptions. And that any woman who was bothered by it figured it was easier to just not say anything.

We write this over and over at Put This On: your clothes communicate. They talk to the world before you open your mouth. Think about what they say.

And if you make a mistake? Cop to it, and apologize. Like Matt Taylor did. That’s being a grown-up.