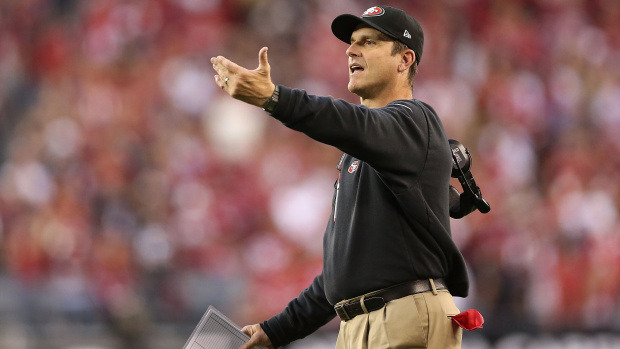 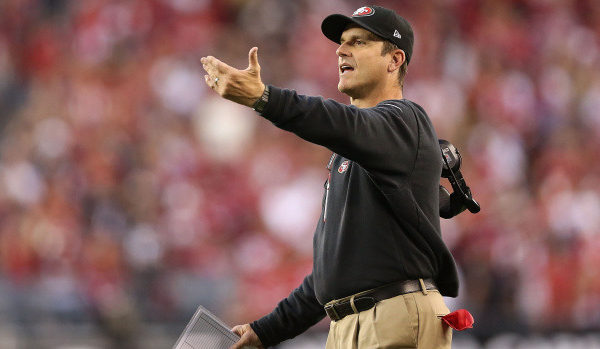 I’m from San Francisco, and I’ve really enjoyed following the 49ers remarkable run this year. Unlike most teams, you can have almost as much fun watching Jim Harbaugh, the Niners’ head coach, as the action on the field. A former player himself, he leaps and runs and screams and yells. He even switched a few weeks ago from street shoes to cleats, so he could get better purchase as he sprinted down the sideline, following the action. All of this, if you’re a fan of the 49ers, is delightful.

But if you’re a fan of menswear, there’s something less delightful: his pleated khakis. Harbaugh tends to layer his tops – a polo and a long sleeve shirt and a sweatshirt and whatever else he can grab. Underneath are khakis so spectacularly anti-style, they seem like something a Vice Magazine’s “Dos & Dont’s” segment would give a “Do” to just to get a rise out of people.

Of course, NFL coaches have to follow strict clothing guidelines. When the 49ers last coach, Mike Nolan, wanted to wear a suit to honor his father (also an NFL coach – back when they wore suits), he was fined by the league for violating dress code, which required only Reebok clothing. He eventually managed an accommodation with the league, and wore Joseph Abboud.

But back to Harbaugh: it turns out, according to a radio interview with his wife, that not only does the former QB wear pleated khakis, he wears eight dollar pleated khakis from Wal-Mart. And he’s so committed to them that after she threw some away, he found a Wal-Mart (not easy in San Francisco) and bought more.

Harbaugh says everything will stay the same while the Niners continue their playoff run, but he might consider a change in the offseason. Jim – if you need a consultant, we’re available.