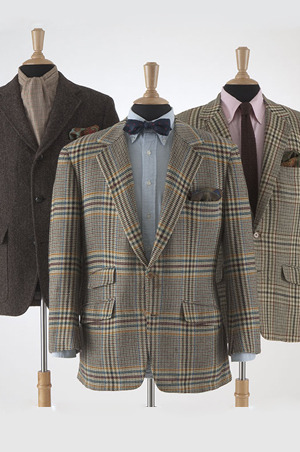 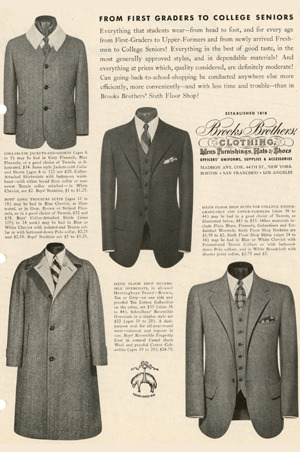 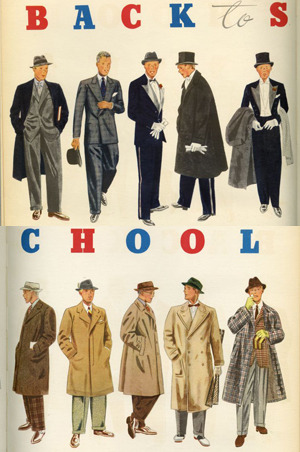 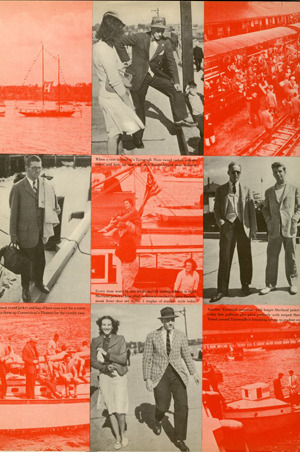 There’s a lovely new book called Ivy Style based on the Ivy Style exhibition at the Fashion Institute of Technology. I’ve been reading it, and besides the glorious illustrations and vintage advertisements featured throughout, one of the things that struck me was G. Bruce Boyer’s description of a college wardrobe in the Ivy era. What’s remarkable about it is that with some very modest tweaks (white bucks aren’t exactly standard issue these days), it could fly for most young men even today, fifty years later.

Six shirts, three white and three blue, and two or three pair of khakis would do the job. In cooler weather, a Shetland crewneck sweater in any color was added. A pair of brown penny loafers and white tennis sneakers (possibly a pair of white or tan buckskin oxfords) constituted the acceptable range of footwear. For outerwear, a cotton gabardine balmacaan raincoat (always tan), and a stout duffel coat (in tan or navy) were all that were needed, although many men also had a cotton gab golf jacket, also in tan… everyone had a tweed sports jacket (Harris or Shetland) and/or a navy single-breasted blazer for semi-dress, and a gray flannel suit for dress. Summer semi-formality was assured with a seersucker or tan poplin suit, some had madras sports jackets, for the more formal occasions a dark gray or navy tropical worsted suit. A half-dozen ties (regimentals, foulards or dots), and the necessary compliment of underwear, socks, pajamas and handkerchiefs filled out the basics.