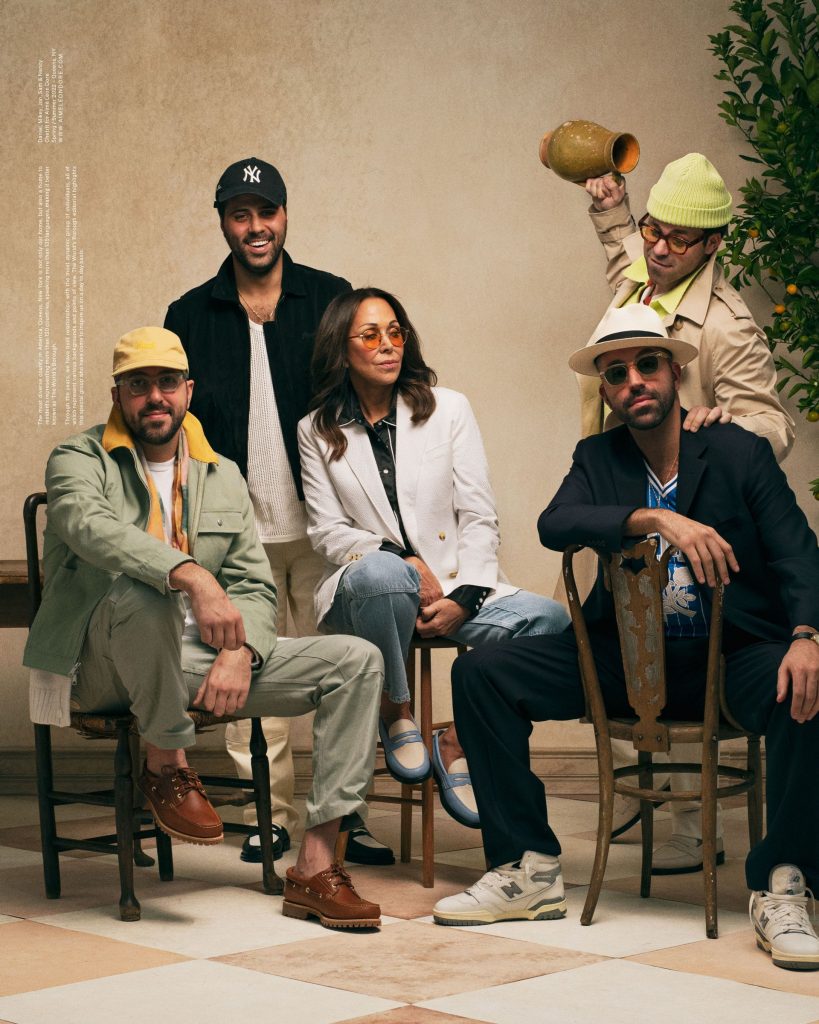 In the last few years, Aime Leon Dore has become one of menswear’s most influential labels. Nearly all brands use some era as a lodestar, but Aime Leon Dore is notable for using a particular time and place in the world: 1994 New York City. Queens-raised Teddy Santis, who founded the label some years ago, deftly uses online imagery and clothes to tell a story about this special period in street culture. On Instagram, Aime Leon Dore posts photos of NYC pizza parlors and 90s-era Micheal Jordan, placing those photos next to images of their fleeces, tracksuits, and sneakers. For a time, Aime Leon Dore had a link on their website for “additional info,” which led straight to the iTunes page for Nas’ Illmatic. It was their way of saying, “this is all you need to know about our brand.” 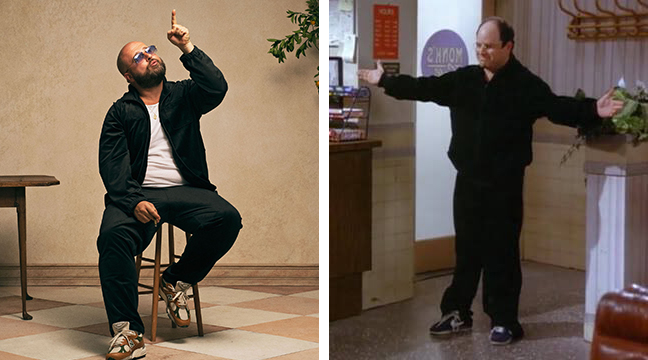 But is Aime Leon Dore, in fact, a tribute to 1994 New York City? I thought so too, for a while, until they released their new spring/ summer lookbook yesterday. Many of the shots look oddly familiar, such as how they dressed Big Body Bes in a black velour tracksuit. “Hm,” I thought. “That looks like something George Costanza would wear.” 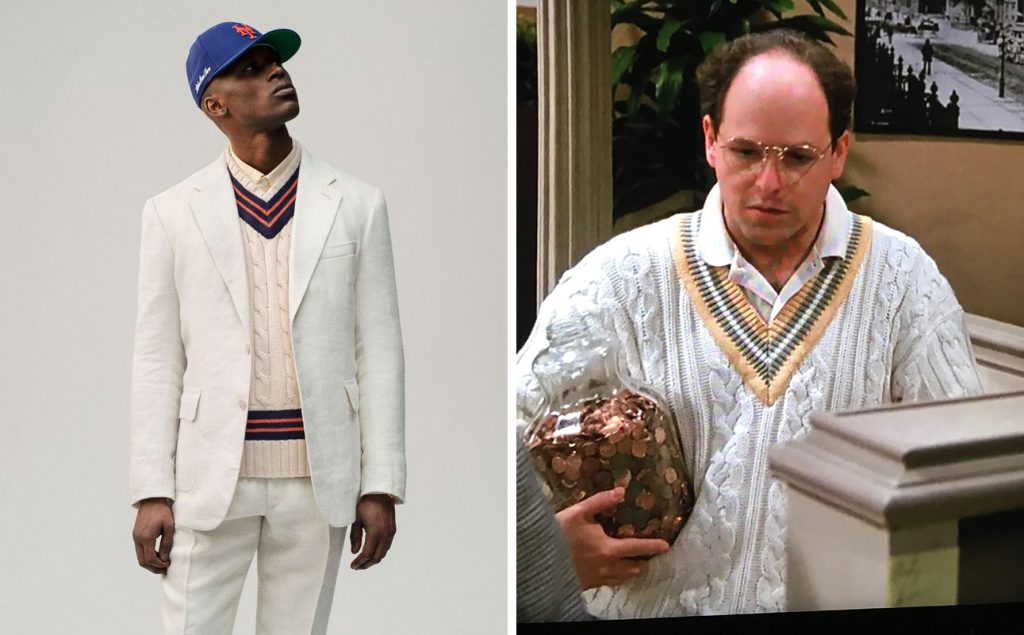 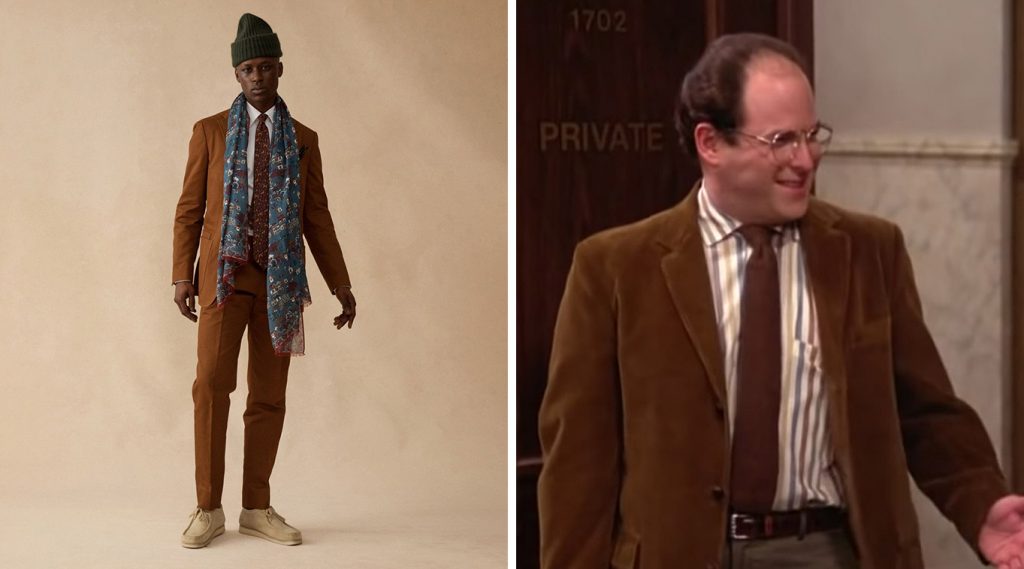 A quick search will reveal some striking similarities. George’s cabled tennis sweater and beige trenchcoat appear in Aime Leon Dore’s catalogs. The chestnut brown corduroy suit, which George wore when he tried to return to his office and pretend he didn’t just quit his job, also shows up as an Aime Leon Dore x Drake’s collaboration. Curiously, Aime Leon Dore styles the model just like George — the chestnut brown color is just right, and the jacket is paired with a burgundy tie. 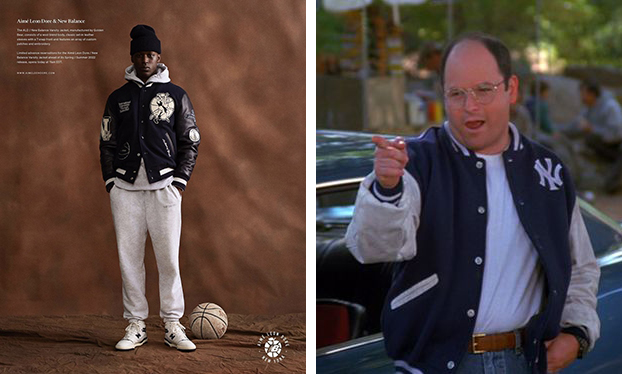 Some might say those classics are bound to appear in any menswear catalog. But how about this? Are ALD’s baseball jerseys and jackets a tribute to 1994 New York City? Or one of George’s only jobs and the time he tried to be a “bad boy?” 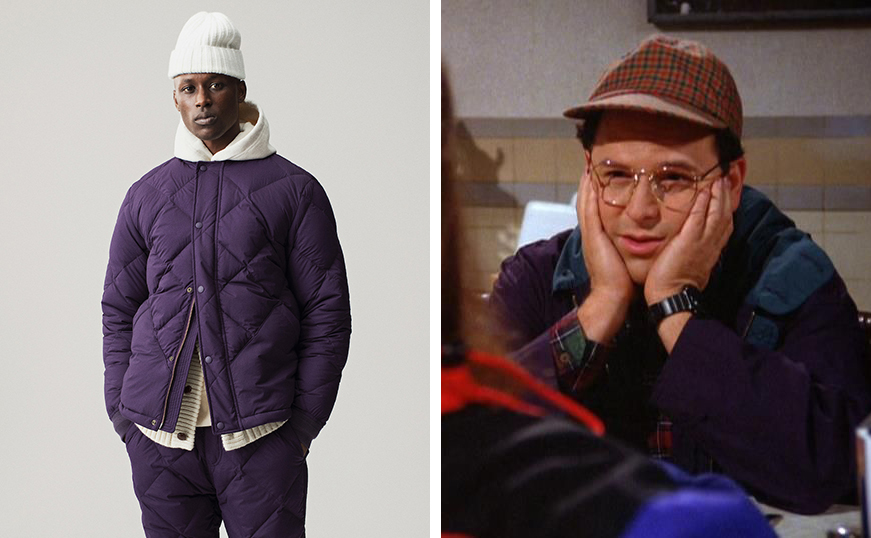 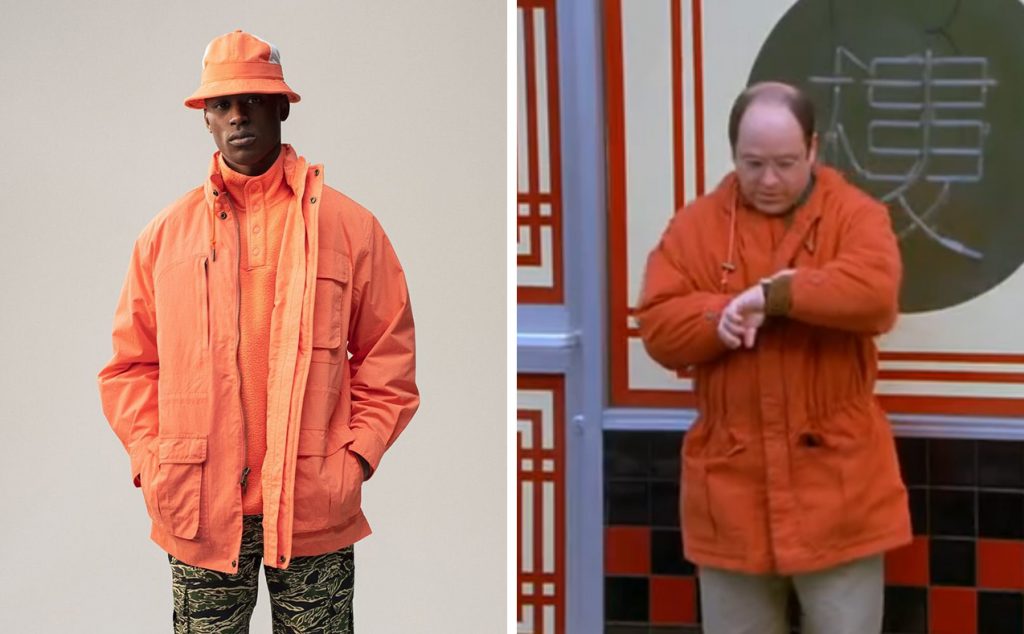 What about these striking similarities? Are they mere coincidences or proof that George Costanza is Teddy Santis’ secret muse? I find it curious. 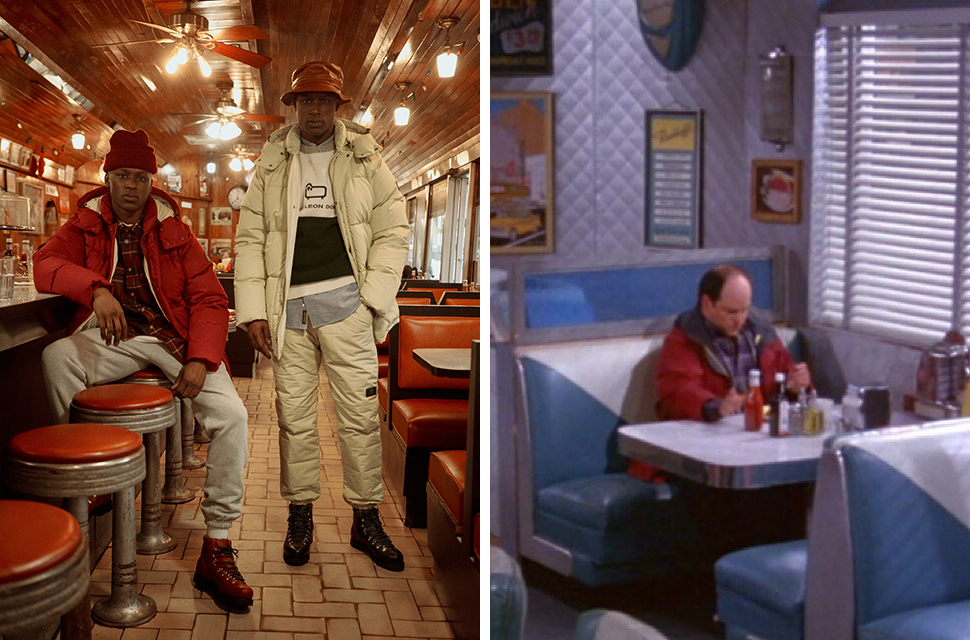 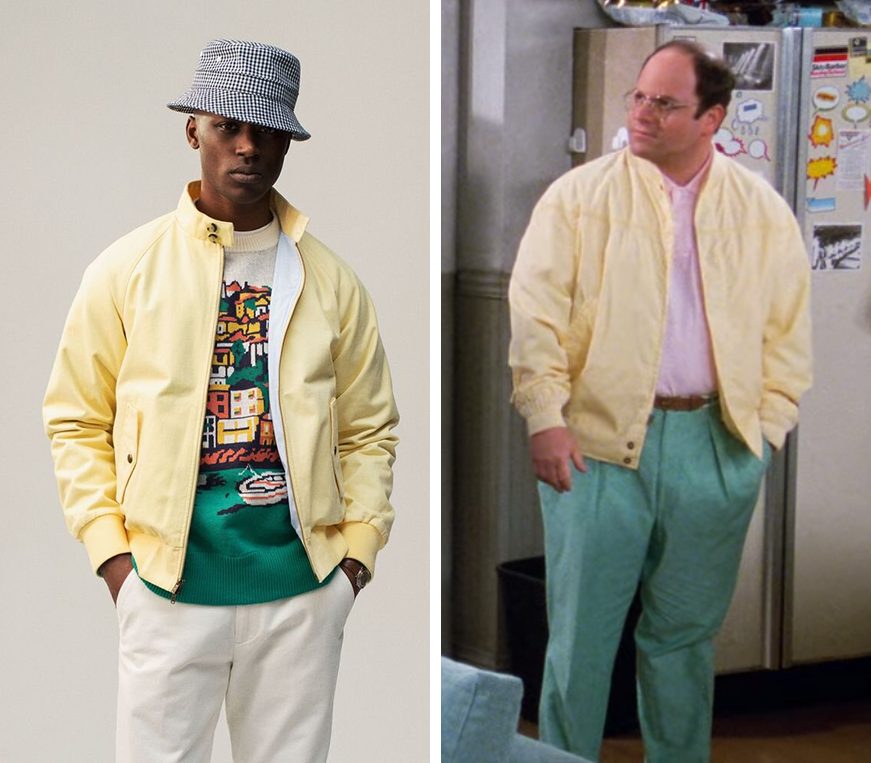 Lightweight lemon-yellow spring jackets appear on both the ALD model and George. And while George’s mustard cardigan is worn with a striped scarf, the ALD cardigan is striped. However, and interestingly, ALD’s stylists had the model also wear a scarf. A coincidence or a clue? 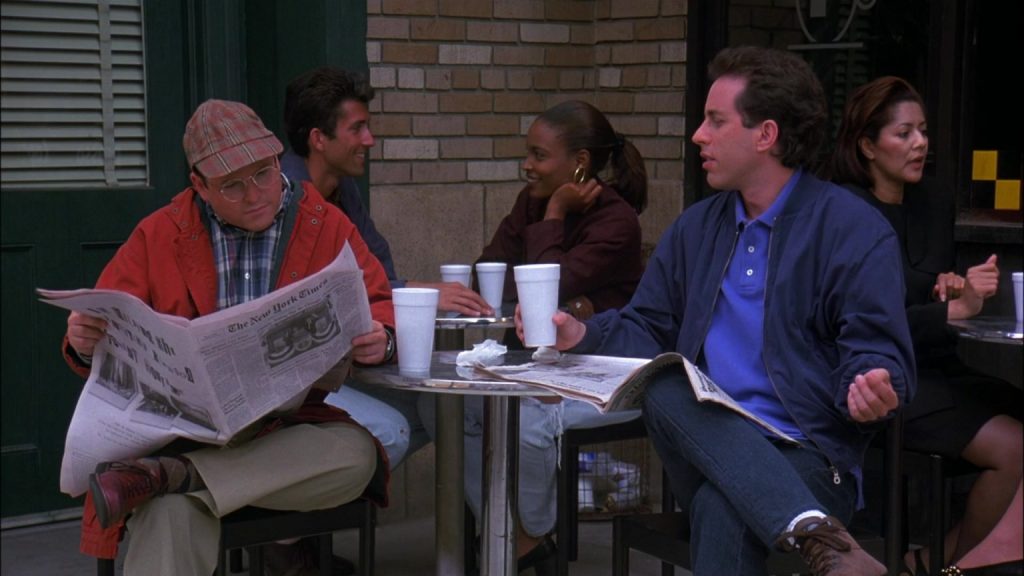 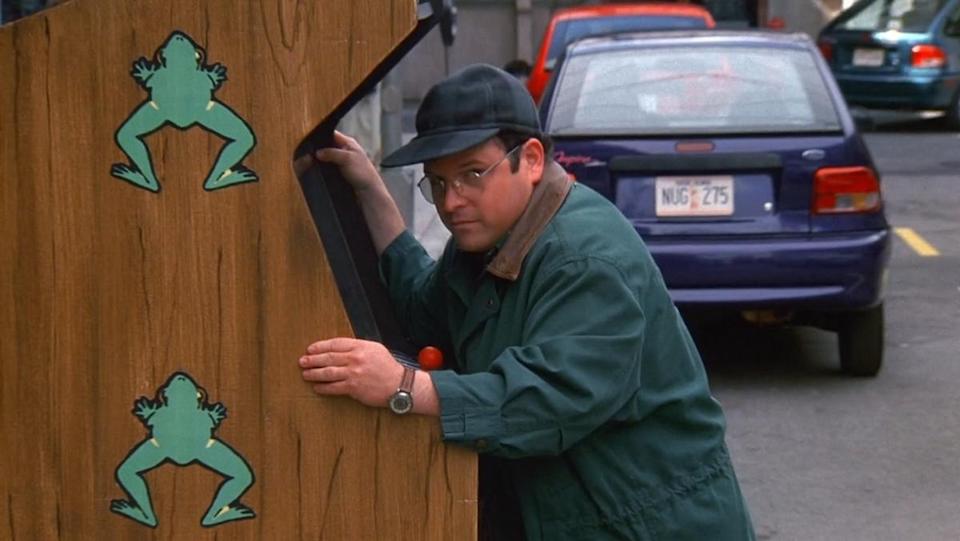 George’s two outfits above also feel very Aime Leon Dore with their low-crown baseball caps and practical outerwear in just-right colors. I have to say, he also looks very stylish.

So, is Aime Leon Dore inspired by 1994 New York City street culture? Or is it some bizarre, twisted, multi-year tribute to Teddy Santis’ favorite television character, George Costanza? Does ALD stand for Aime Leon Dore or Apparel by Larry David? At press time, an email to ALD asking these very questions went unanswered (how interesting). I will leave it to you to decide. 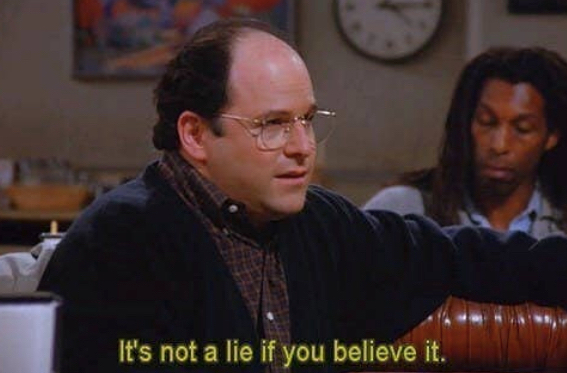