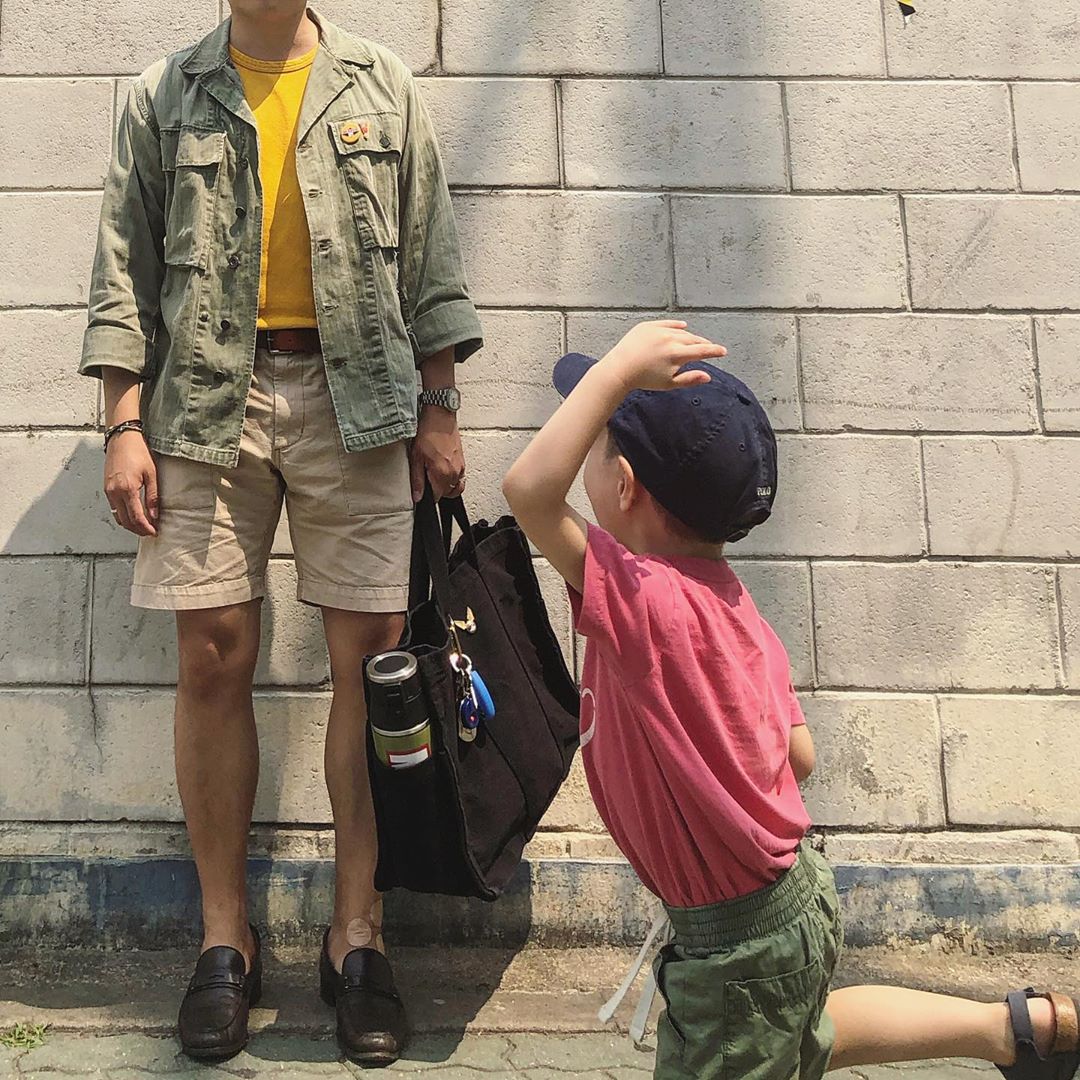 Few items in men’s wardrobes have proven to be as controversial as shorts. They’re the most significant dividing line between those who care about their appearance and those who privilege comfort. A couple of years ago, there was a bruhaha over whether men should be allowed to wear shorts to work. If women are allowed to bare their legs, so goes the logic, why should men have to suffer in trousers? Then there was the Great Cargo Short War of 2016, where people debated whether cargo shorts have any place outside of a Soundgarden concert (the debate recently resurfaced in conservative circles). Larry David sounded off on men traveling in shorts in an episode of Curb Your Enthusiasm. The short debates have been raging for over a hundred years. In interwar Britain, a flock of odd ducks banded together under the Men’s Dress Reform Party. Among their many strange, style-related issues, they demanded that men be allowed to wear shorts for physical and moral hygiene reasons.

To be sure, there are good reasons to never wear shorts. They can be too suggestive of Boy Scout and private schoolboy uniforms, as well as an age before childrenswear became shrunken-down versions of their adult counterparts. They also show off your legs, and few men have good-looking legs. But most of all, few people know how to wear them well. What do you wear with shorts? How long should they be? Can they be patterned?

For direction, we turned to Sam in South Korea, the head of the Seoul-based menswear boutique THE RESQ & Co. and one of the best short wearers we know. Sam wears shorts three seasons out of the year. During the colder months, he pairs them with parkas, Champion sweats, and neo-retro styled outdoor gear. In the summer, Sam switches those things out for lightweight military-styled jungle jackets, overshirts, chambray shirts, button-downs, and graphic tees. His outfits reference the heydays of American style, particularly Rugged Ivy, and look a whole lot better than the cargo-shorts-with-polo ensembles that give this style a bad name. 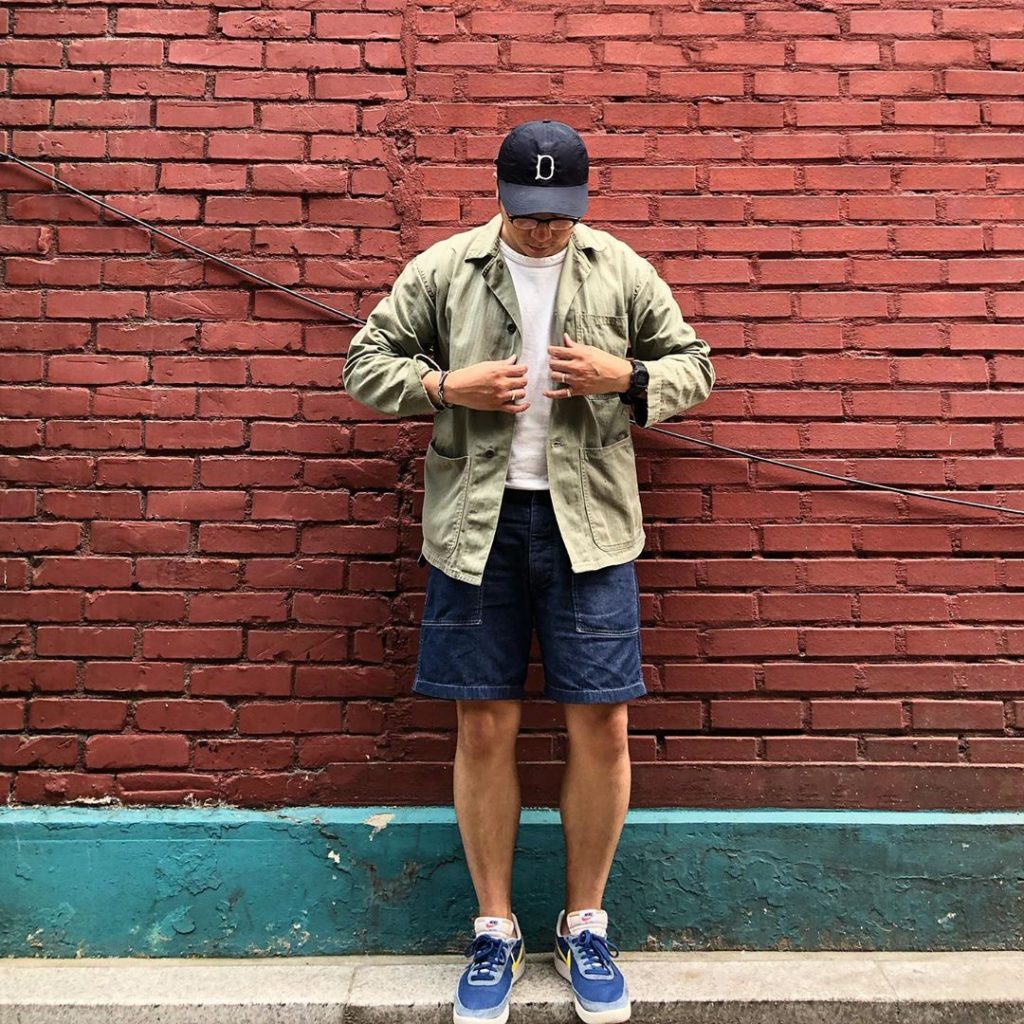 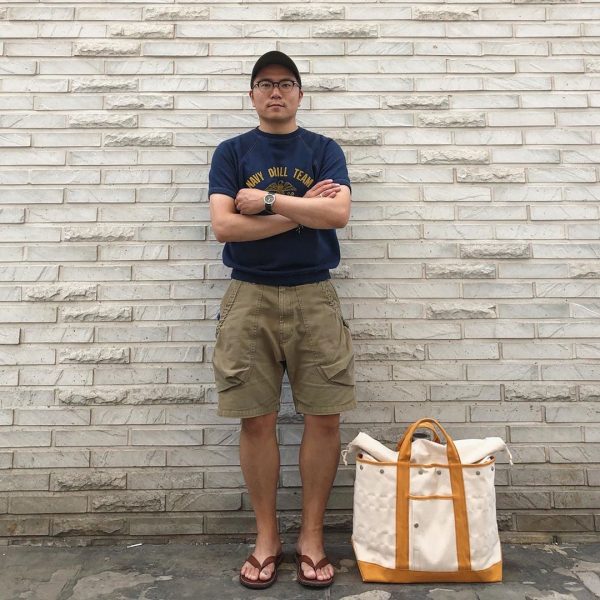 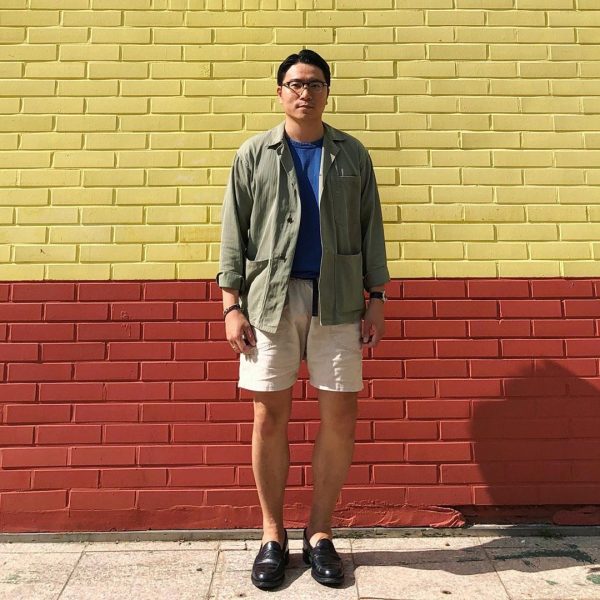 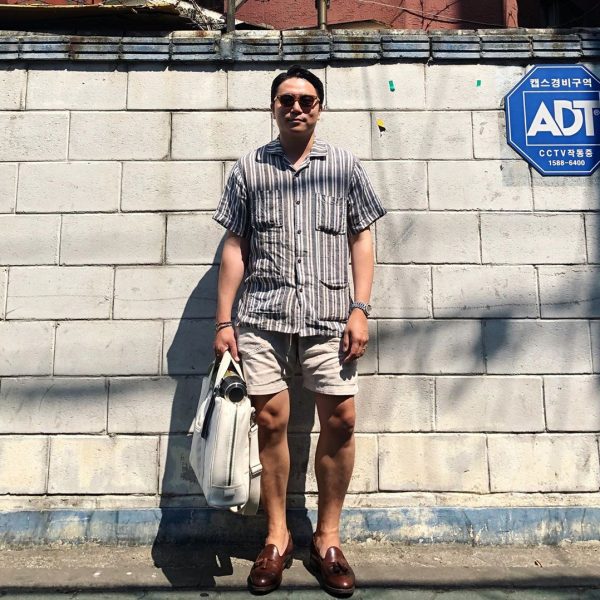 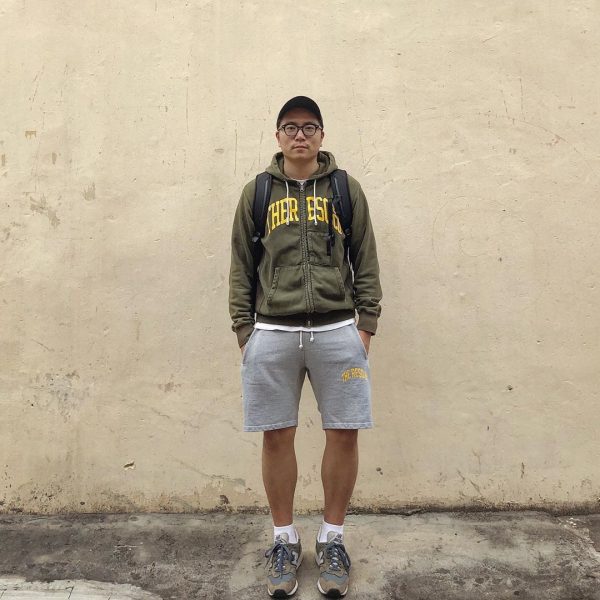 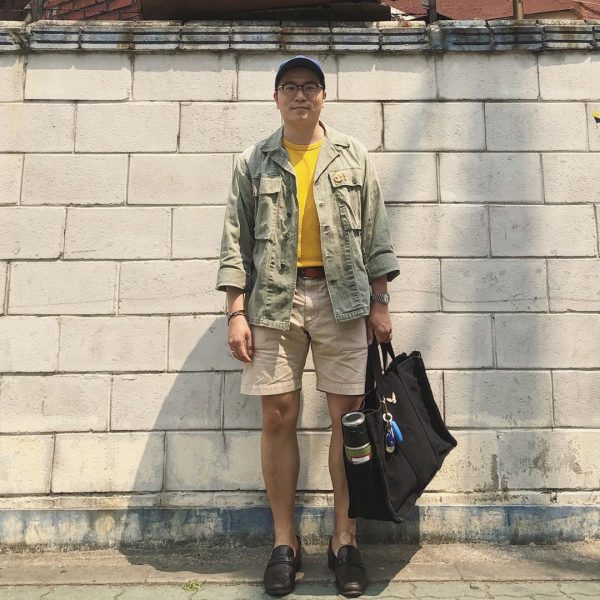 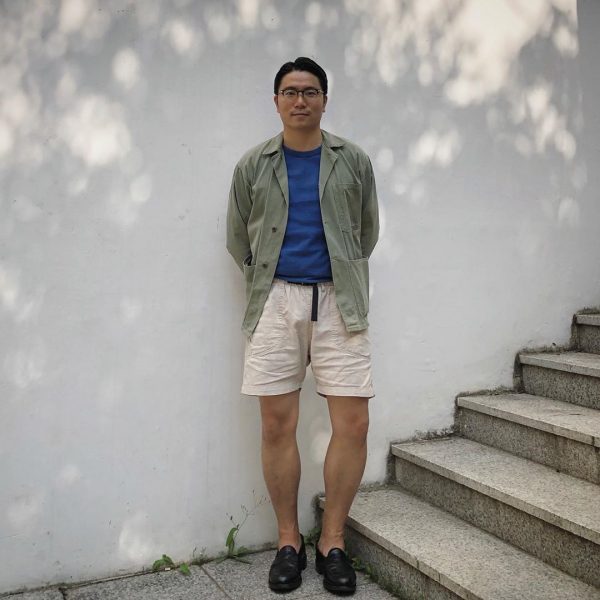 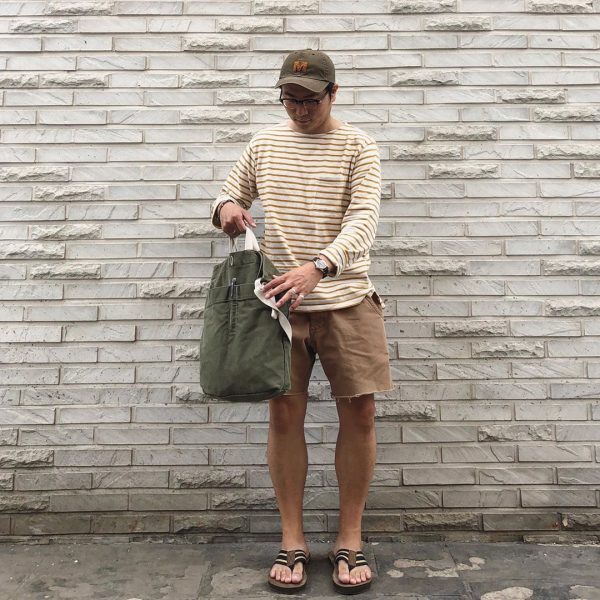 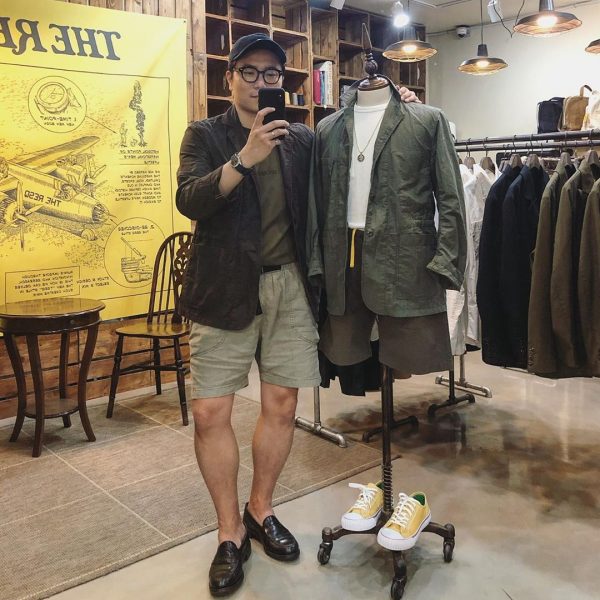 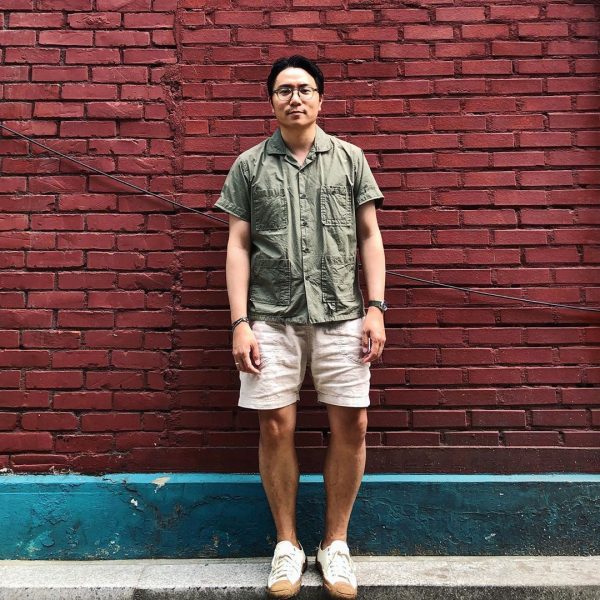 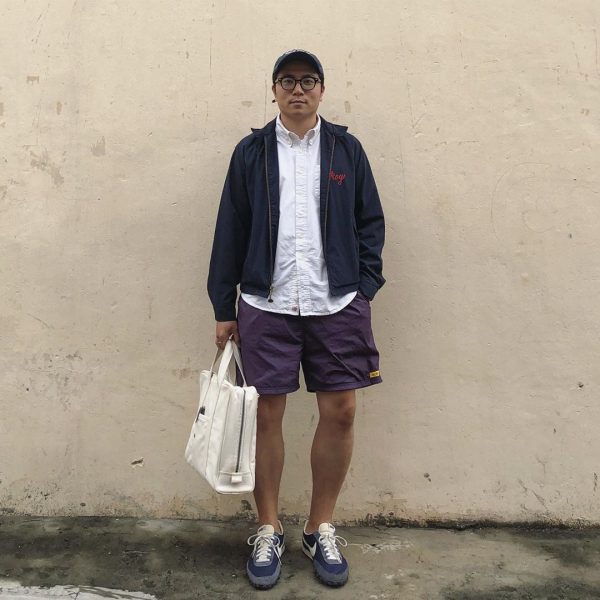 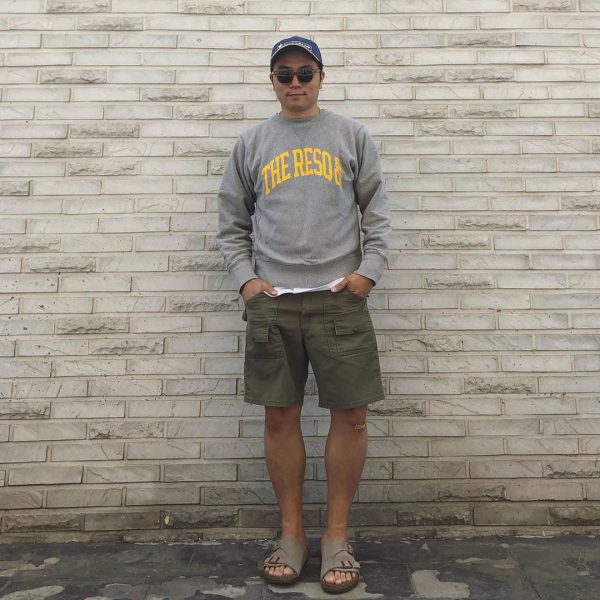 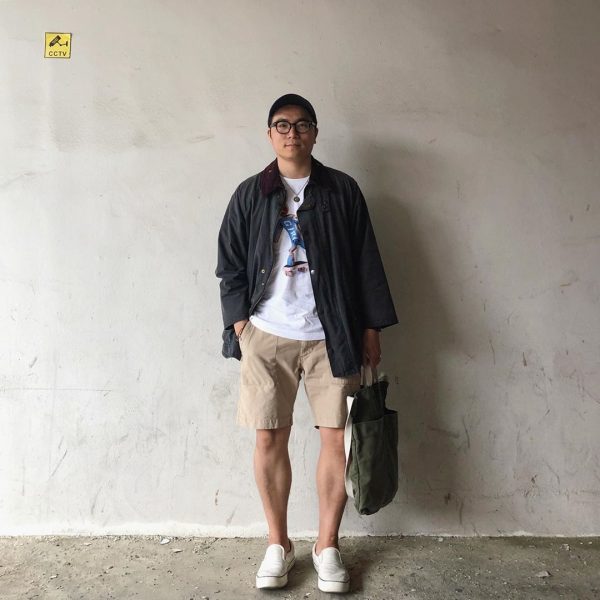 Tips for How To Wear Shorts

The Right Cut: There’s nothing wrong with a shorter cut — thigh-length shorts are popular right now — but if you’re getting your first pair, consider something middle-of-the-road. Most of Sam’s shorts fall a little above the knee, which keeps them from looking too fratty or daring. And while he has a couple of baggy shorts, most of them are slim-straight and keep good proportions with his body. “It is important to choose shorts that complement the thickness of your legs,” he recommends.

Color and Pattern: Much like the cut, there’s nothing wrong with something adventurous in terms of color and pattern. But if you’re after something you can easily throw on in the morning, treat these like chinos. “Khaki, olive, and navy are pretty easy colors to wear,” says Sam. “Solid colors are also easier to coordinate with shirts and shoes.”

Details: “I like to wear shorts without a belt,” says Sam. “And I like the design to be functional, so I look for smartly designed pockets and sometimes pleats.” When it comes to the very controversial cargo short, Sam says it depends. “I prefer basic shorts, but sometimes I’ll wear cargos. Cargo shorts often have to be a little longer, ending around the knee so that they can accommodate for the large pocket. Generally, it’s easier to wear plain-colored, khaki shorts in a more basic style.”

Styling: Sam says he generally wears shorts with oxford button-downs and chambrays. Then, if the weather allows, he’ll layer with a lightweight jacket, such as a jungle jacket or military overshirt. In a few of the outfits above, you can also see him wearing shorts with t-shirts. Graphic t-shirts have gotten a bad rap, not undeserved, but Sam’s choices are tasteful. If he goes with a plain colored tee, he says he likes to play more with textures (a waffle knit t-shirt can do this for you).  And for shoes, he generally sticks with classic sneakers, loafers (tasseled and penny), and flip-flops. “I like matching colors through a bag or watch strap,” he adds. 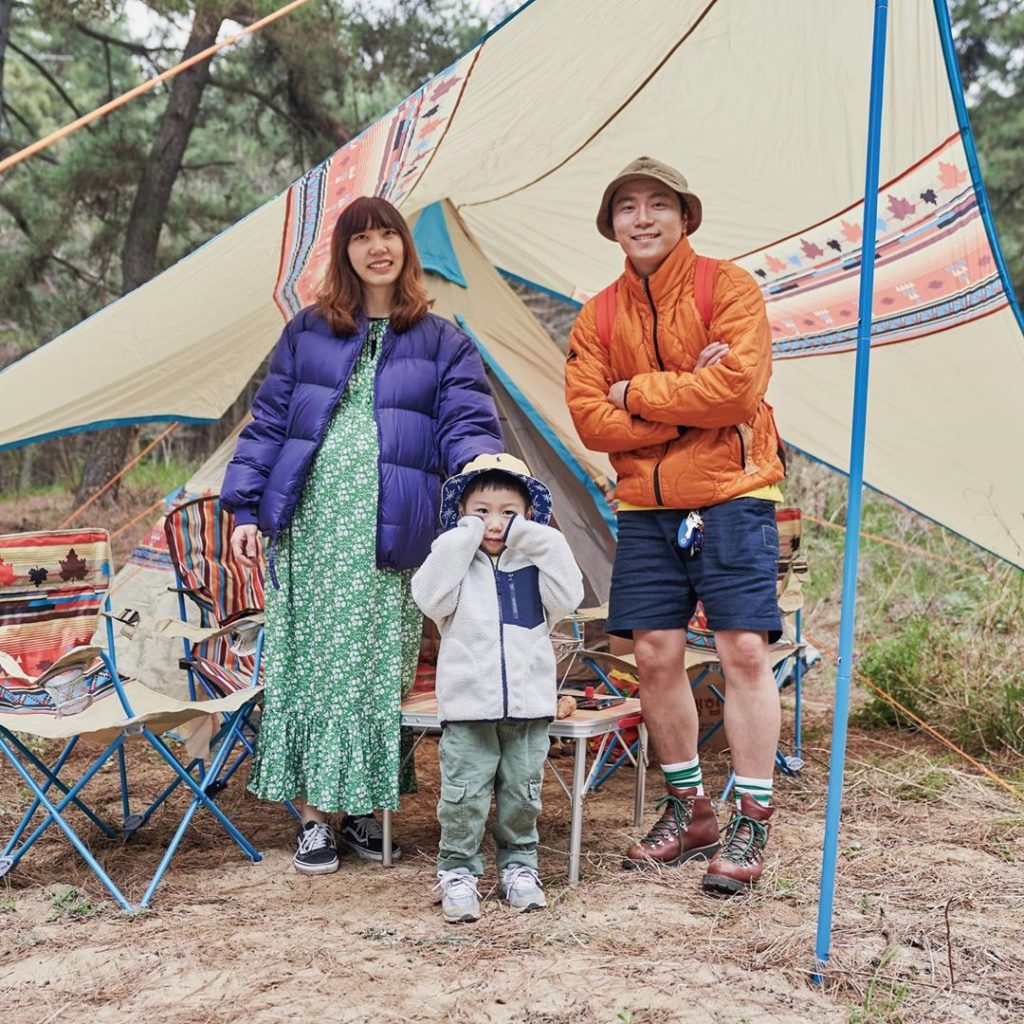 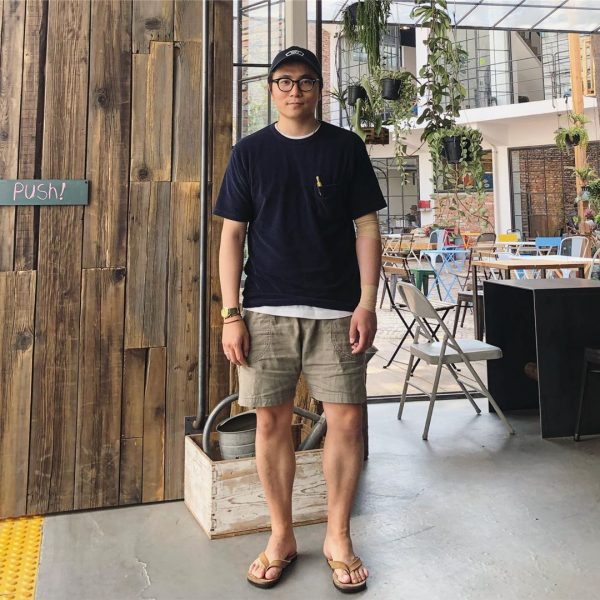 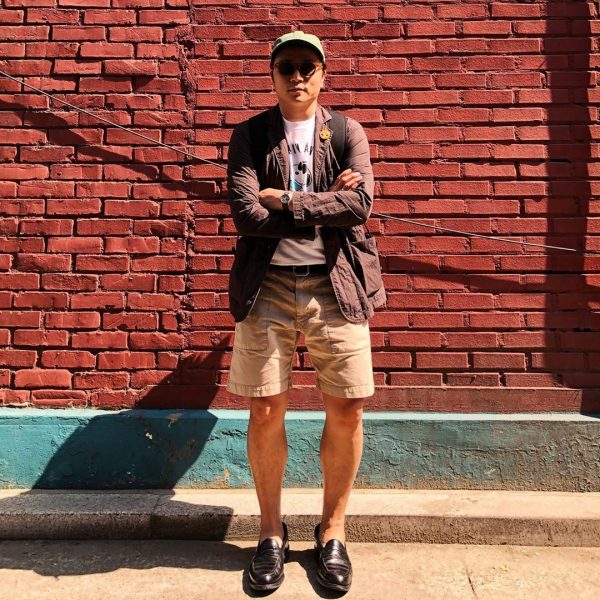 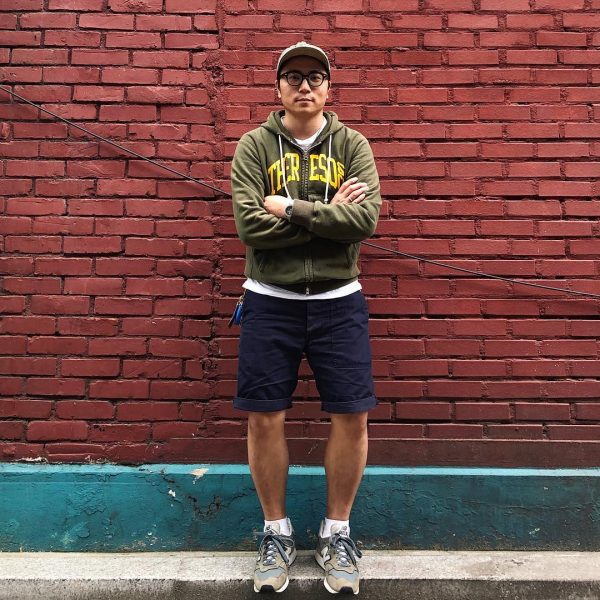 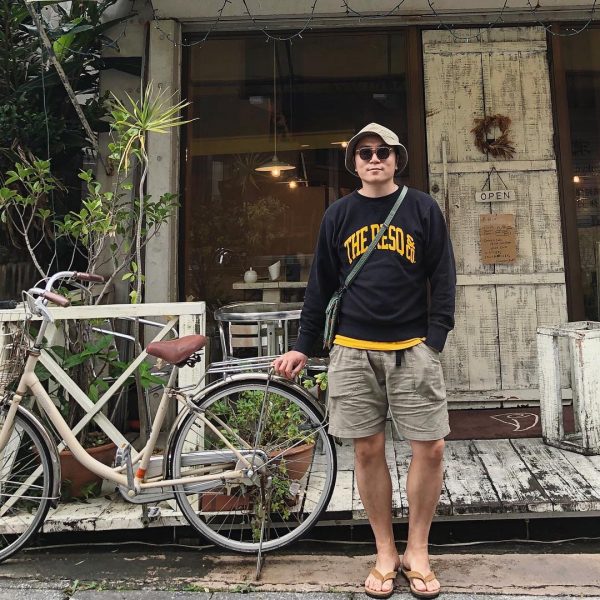 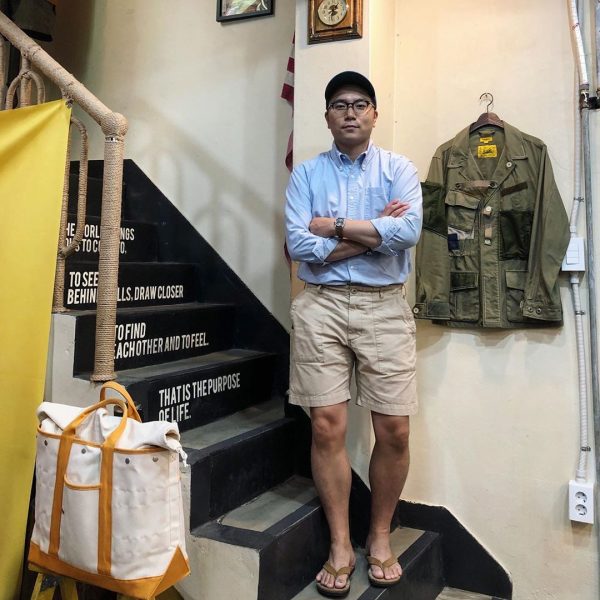 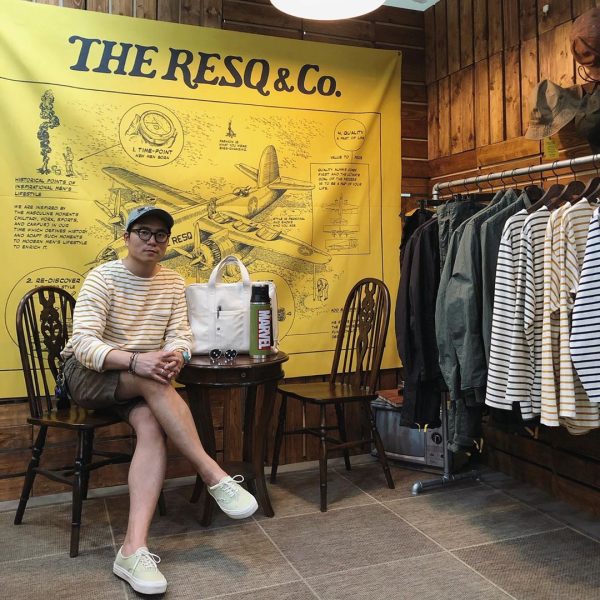 Stay Within an Aesthetic: It takes a bit of familiarity with fashion to do this successfully. You’ll probably need to know a bit about the history of the item or how things are generally combined in specific niches. But the general idea is not to pluck random things from your closet and throw them together in a way you assume looks good. Find a well-defined aesthetic — workwear, Rugged Ivy, contemporary classic, etc. — and work towards that.

Sam mixes and matches the sort of things that have made American style famous. There’s the military surplus gear GIs continued to wear after the Second World War, when they returned home from their stations abroad. There are also campus classics, such as retro running sneakers, oxford button-downs, and collegiate sweatshirts, which comprise the dressed downs styles of the Ivy era.

The best way to wear shorts is to stay within a well-defined aesthetic. When you’re just starting out, however, it can be challenging to learn this visual language. Find inspiration where you can – films, music scenes, historical archives, and fashion lookbooks are natural starting places — and try to create a message with your clothes. We have a two-part series on different casualwear styles.

Favorite Brands: Being the owner of a menswear boutique, Sam naturally favors his own line of shorts, which are available online. If you don’t read Korean, THE RESQ’s website can be a little hard to navigate. However, you can reach out to Sam directly through email (his contact information is at the bottom of the site). Sam says he also likes to wear military and sportswear styled shorts from both vintage and contemporary brands. “RRL, Engineered Garments, and Champion have great vintage-inspired details,” he says.

Thanks to Sam for taking the time to answer our questions! For more of Sam, you can follow him on Instagram. 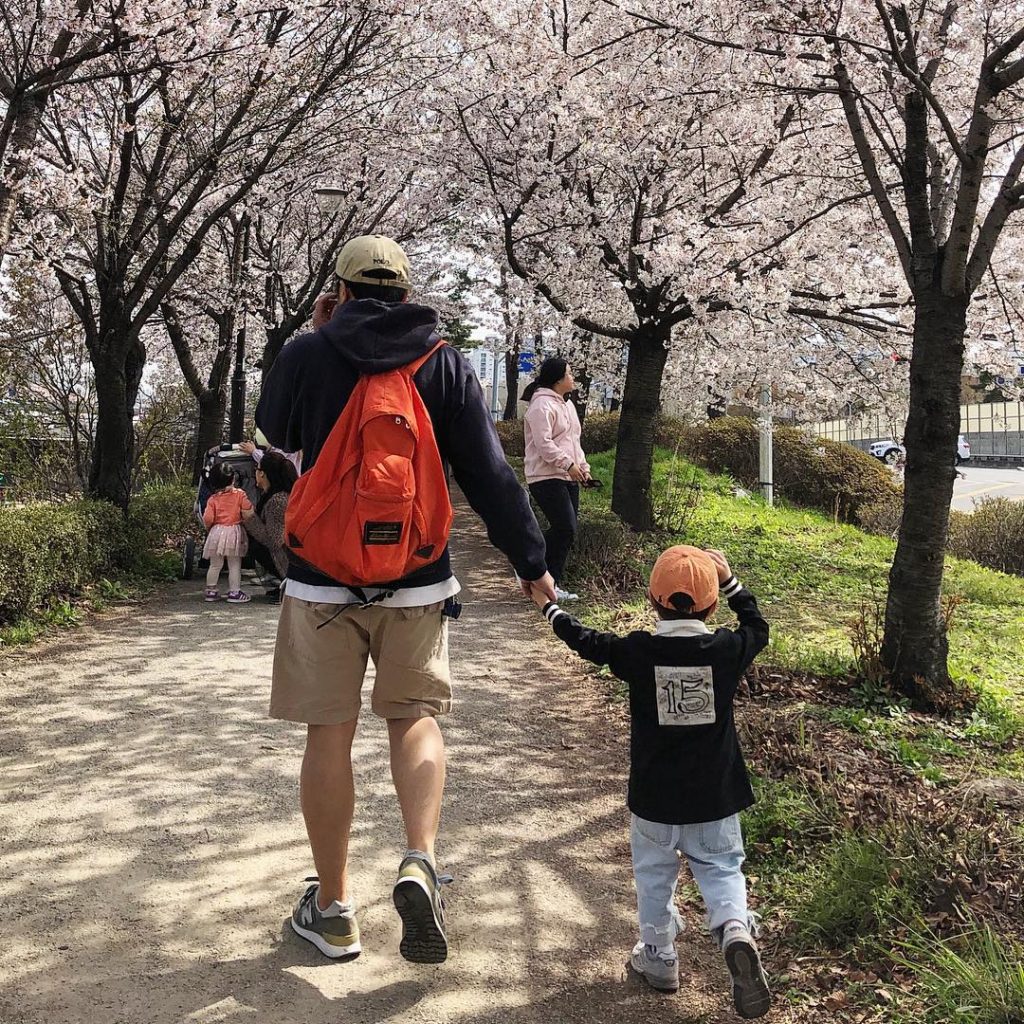