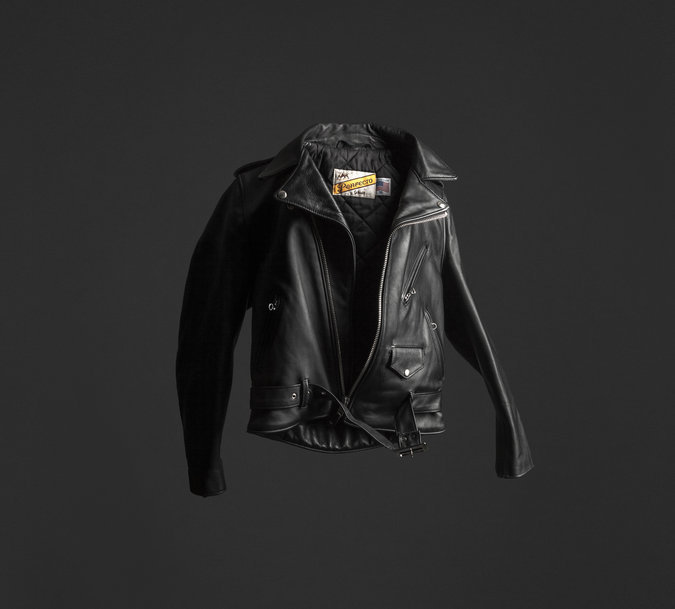 Troy Patterson has an interesting article in the New York Times today on the history of the leather jacket. Specifically black leather motorcycle jackets and their role as signifying rebellion in everything from rock and roll to gay culture. An excerpt:

Just as actual 1930s gangsters aped the style of characters played by the actor George Raft, real-life delinquents turned to black leather. You didn’t need a motorcycle to be in a ‘‘motorcycle gang,’’ according to the moral-­panicky logic of the day. What is more, you didn’t even need a gang to enjoy the aura of a gangster, a fact attested by the many teenage rebels whose acquisition of a motorcycle jacket constituted the full extent of their rebellion. But for pseudogangs — that is, for rock bands and teen cliques devoted to them — the motorcycle jacket is an international uniform impervious to obsolescence. It is a garb for all tribes: goths in Kenya; rockabillies in Japan; you in your youth, wherever you wasted it.

Its signal plays on many frequencies, expanding its meanings when garbled. Writing about the Ramones, the critic Tom Carson once sketched the dynamics of the masquerade: ‘‘Their leather jackets and strung-out, streetwise pose weren’t so much an imitation of Brando in ‘The Wild One’ as a very self-­conscious parody — they knew how phony it was for them to take on those tough-guy trappings, and that incongruousness was exactly what made the pose so funny and true.’’ The Ramones’ imitators did not necessarily get this, and instead, reading the self-­parody as an uncomplicated statement of force, copied that. Or consider the curious intersection of gay leather and heavy metal. ‘‘The Wild One’’ was also a lodestar for sexual outlaws — for the homoerotic illustrator Tom of Finland, for instance, and lesbians who identified as ‘‘dykes on bikes.’’ Two decades before coming out of the closet, Rob Halford, the leader of the band Judas Priest, cultivated a stage presence that depended on the queer aesthetics of the leather daddy to entertain a furiously heteronormative audience of headbangers. Masculinity is pliant material.