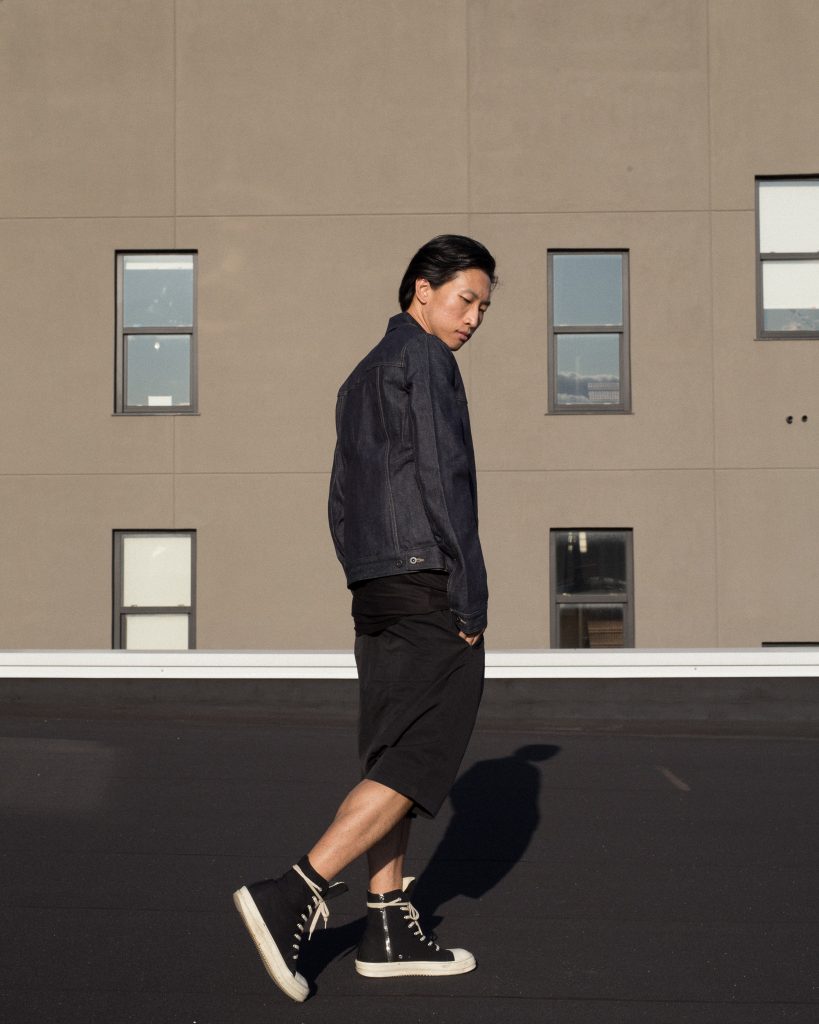 Kiya Babzani is mostly hushed about who patronizes Self Edge, the small denim empire he co-founded with his wife Demitra nearly 15 years ago. But in a 2014 interview with Caught in the Crossfire, he mentioned one of the most unlikely of customers. One day, he got an order for some Flat Head and Iron Heart flannels. The credit card failed to go through due to a billing mismatch, however, and he suspected maybe this order was fraud. So he looked at the customer’s delivery information — Owenscorp in Paris — and reached out. “Oh, it’s for Rick,” the buyer explained. “Sorry if the credit card didn’t go through. He wants these things sent to his studio.”

Rick, of course, refers to Rick Owens, who’s reverently known to his fans as the Lord of Darkness. For the last 25 years, Rick Owens has been one of the most revolutionary names in fashion. His clothes don’t so much fit the body as they drape, twist, and sculpt around the wearer’s figure. Even if they don’t fit into your wardrobe (which they probably don’t if you read Put This On), it would be difficult not to appreciate their technical craft. On pattern making alone, Rick Owens’ collections exceed what you’d find on Savile Row.

Owens doesn’t seem like the kind of person who would shop at Self Edge. His style is much darker and more gothic, while Self Edge is known for their Japanese denim, rockabilly shirts, and repro workwear. But apparently, he loves the stuff. A year after ordering his kitten-soft brushed flannels, his assistant called Kiya again to order another. “The Iron Heart flannel has been lost, the red buffalo check,” she mentioned. “Can you send a replacement?” Kiya didn’t have another at the time but was told to send the same model in blue.

The assistant said they would just dye it, which, if you know anything about clothing, is impossible. Solid-colored garments can be dip-dyed as whole pieces, but patterns are woven from pre-dyed yarns. To recolor a pattern, you’d have to take the entire garment apart at the yarn level. “At the time, I was thinking, ‘I’m not arguing with Rick Owens,'” said Kiya. “Maybe he has this crazy-ass way of dyeing.” 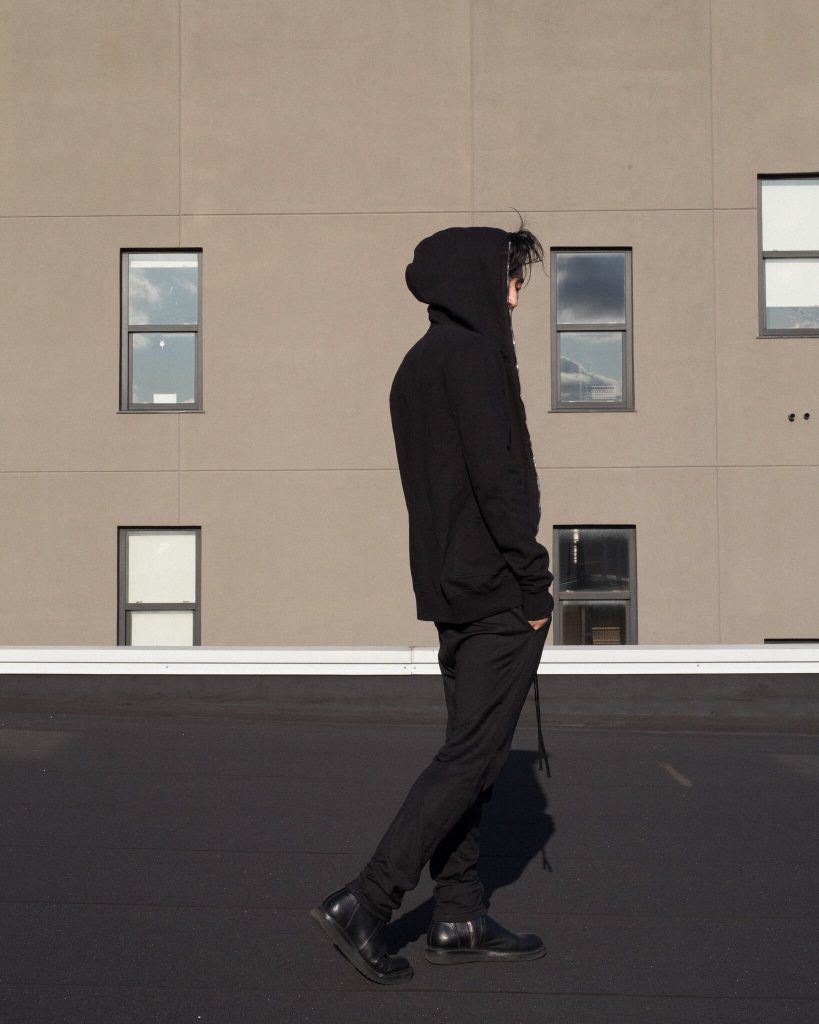 Above: Sidney Lo in the DRKSHDW hoodie and made-in-Japan jeans

Nearly ten years later, Self Edge and Rick Owens would cross paths again. When I sat down with Kiya last year at Linea Coffee — a small espresso bar near his San Francisco flagship — he mentioned that he and Demitra were going to spend the summer in Athens, Greece. “We’re going to hang out there for a bit and then attend Paris Fashion Week,” he said. “I got invited to Rick Owens’ show.”

As an industry, men’s clothing used to be much more Balkanized. Pitti Uomo was for tailoring, Bread & Butter was for workwear, and Paris Fashion Week — along with its ilk in New York City, Milan, and London — was for big-name fashion brands. But as consumers have started to diversify their wardrobes, companies have followed. Visvim and Gosha Rubchinskiy have shown at Pitti. Streetwear names such as Supreme and Virgil Abloh commonly collaborate with mainstream luxury brands. And, as of yesterday, you can find Rick Owens’ DRKSHDW Made-in-Japan line at Self Edge.

The collection has been a little more than a year in the making. When Kiya and Demitra flew out to Paris, they attended their first Rick Owens show and got to meet some people at Owenscorp. The company wanted to know what the couple thought a DRKSHDW capsule collection might look like it if was carried at Self Edge. “A few years ago, a friend of mine, Dylan Mayes, started working for Rick Owens and does all their denim development,” says Kiya. “He told me they were working on a denim capsule collection.”

“At that point, I didn’t think we’d be carrying anything from Rick Owens — because why would we — but over a year, I got to see fabric swatches and samples,” he continued. “The conversation really started at Paris Fashion Week. So much of what they were looking at was up our alley — made-in-Japan production, selvedge denim, small run batches, etc. So we talked about what the line might look like if it was carried at Self Edge. The samples were tweaked a few times, and the final products looked great, so we brought them into our stores.”

It’s strange to think you can now find DRKSHDW hanging alongside names such as 3sixteen, Iron Heart, and Buzz Rickson, but Kiya says so much of what Rick produces already crosses over into workwear. “If you look at the magnum shirts, the CPO style shirts, the MA-1 styled jackets — a lot of what they produce is similar to what we sell. It’s just that they push the fabrics and silhouettes so much.” Indeed, Rick is famously known for his unique use of paneling and darting. 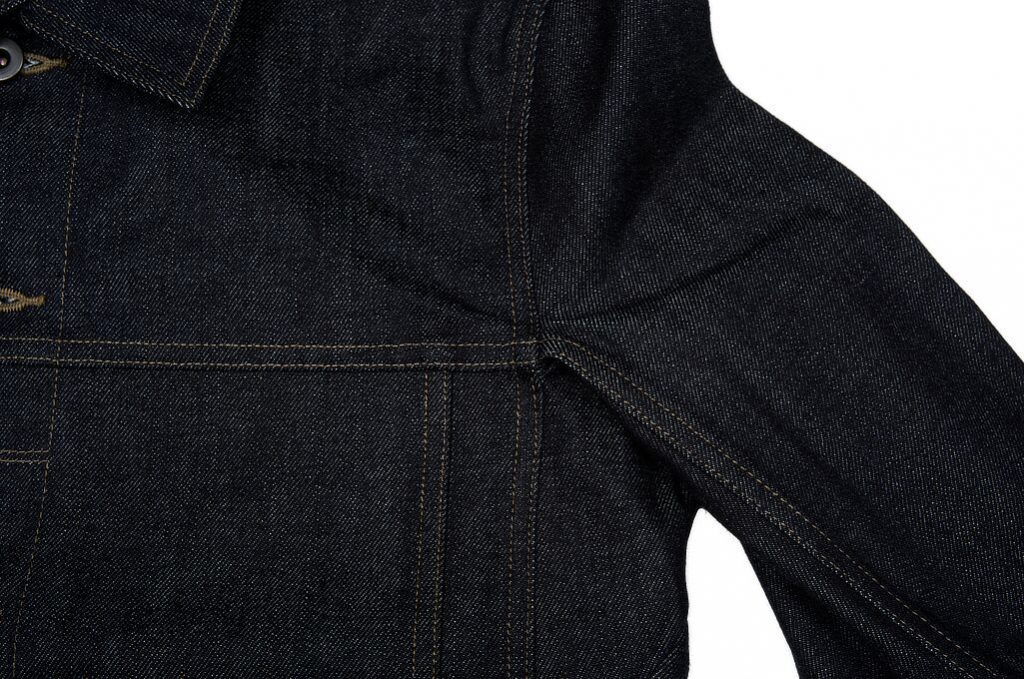 Above: Details on the jacket’s side panel and darted jeans

In this collection, the denim trucker jackets — a hybrid of Type I and II — have hidden hand pockets along the side seams, slightly elongated arms (a Rick Owens signature), and a side panel that flows continually into the back half of the sleeve. The panel is part function, part aesthetic. It adds shape to the garment while also creating an interesting line that goes up the back half of the body.

The jeans — made from 13.75oz, sanforized, Japanese selvedge denim — have been tweaked from Rick’s Detroit cut, a staple in his collections. They’re a slim-tapered cut with a medium rise, and available in a grey-cast indigo-dyed blue, as well as waxed black. Along the inner thigh, the fabric has been folded down and sewn — a technique known as darting — which helps take out some of the fullness around the lap. As the jeans wear down, you can expect some unique fading in this area. Along with these jeans and jackets, Self Edge is also carrying Rick Owens’ DRKSHDW “Gimp” hoodie.

This collection marks the first time Rick Owens has produced a part of his collection outside of his own factories in Italy. Every garment was made from start to finish in Japan, including the denim’s weaving, but Rick imported his own thread. “Rick is very particular about the constructional thread. It’s a brownish-grey color Rick developed years ago called DARK DUST,” says Kiya. “It sounds weird not to have a goldenrod colored thread in blue jeans, but it actually looks very natural.”

“When people first heard about this collection, I think they were expecting some extreme things,” says Kiya. “A lot of what gets press attention pushes the boundaries, but the majority of his collections are very wearable.” The DRKSHDW denim capsule collection has only been at Self Edge for a week — online as of yesterday — but it’s already brought in an interesting mix of customers. Diehard Rick Owens fans, who may have never owned something made outside of Rick’s Italian factories, are coming in to browse the collection. At the same time, Self Edge’s regular customers are getting a chance at handling their first Rick Owens product. It’s the kind of shoulder-to-shoulder rubbing that would have been unthinkable ten years ago but has become more common as these community boundaries break down. 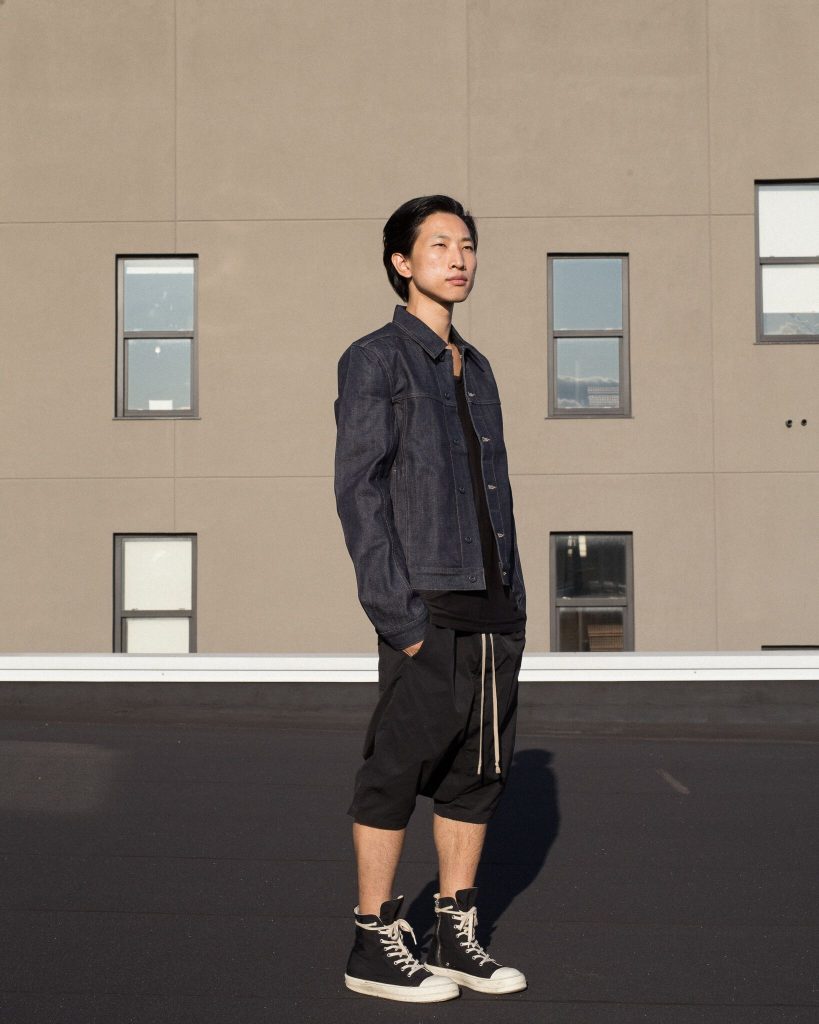 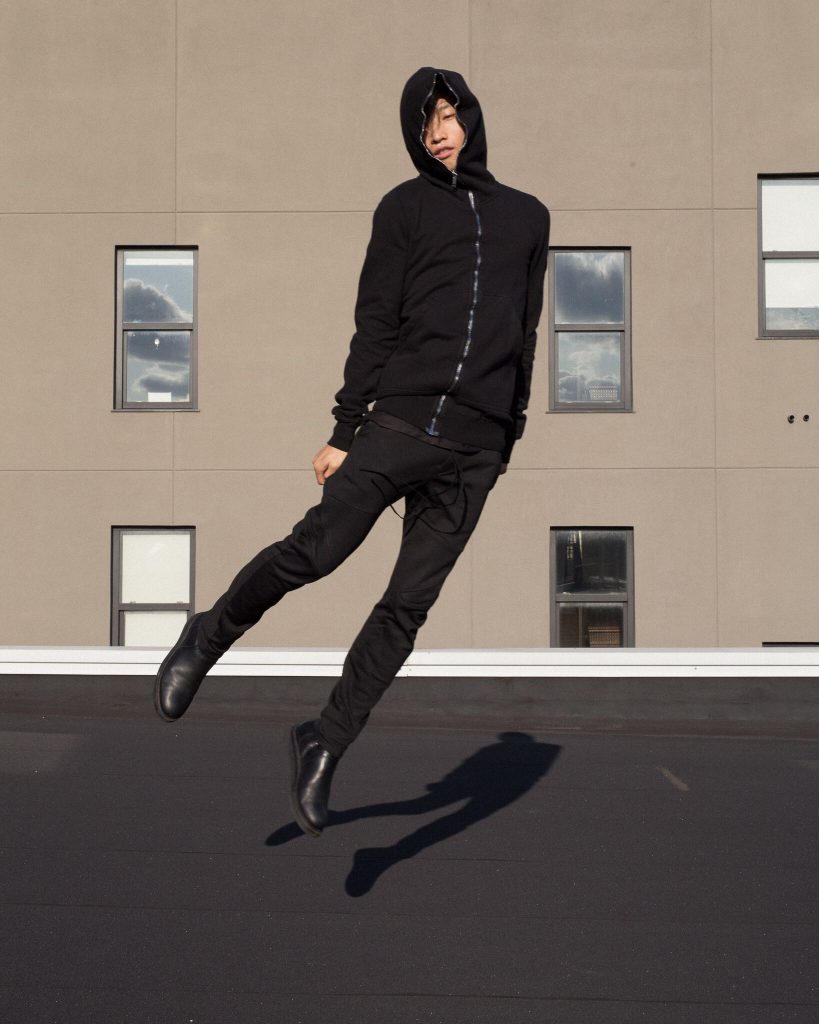 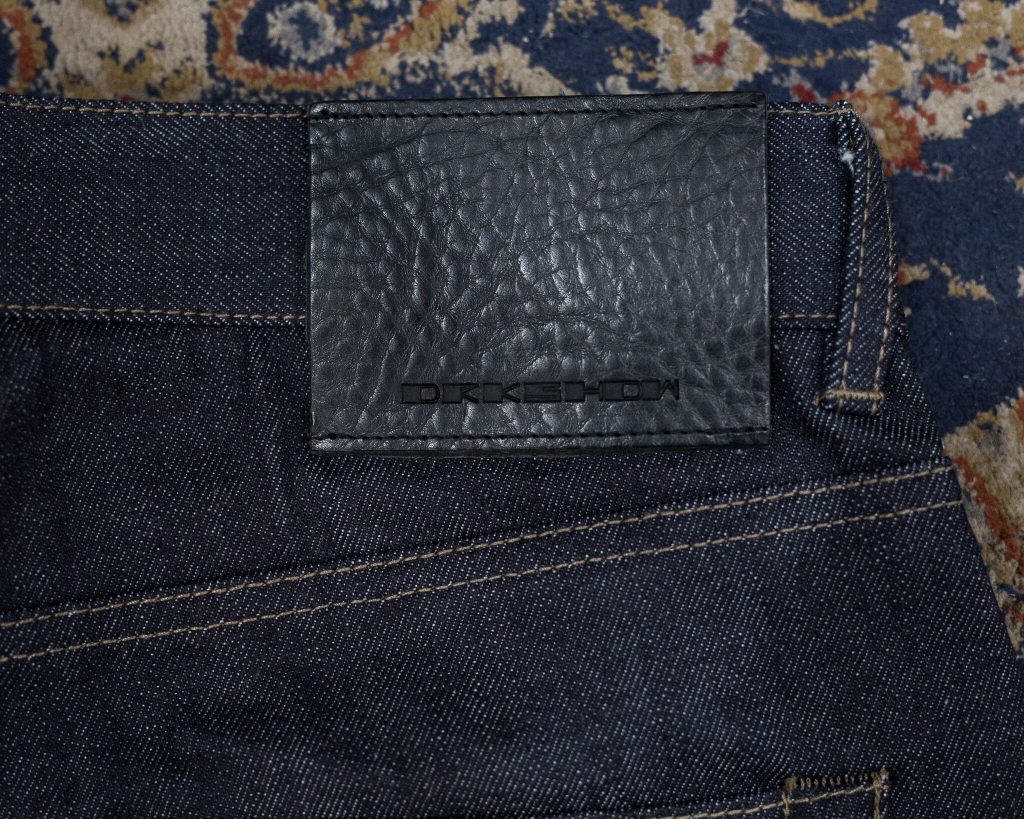 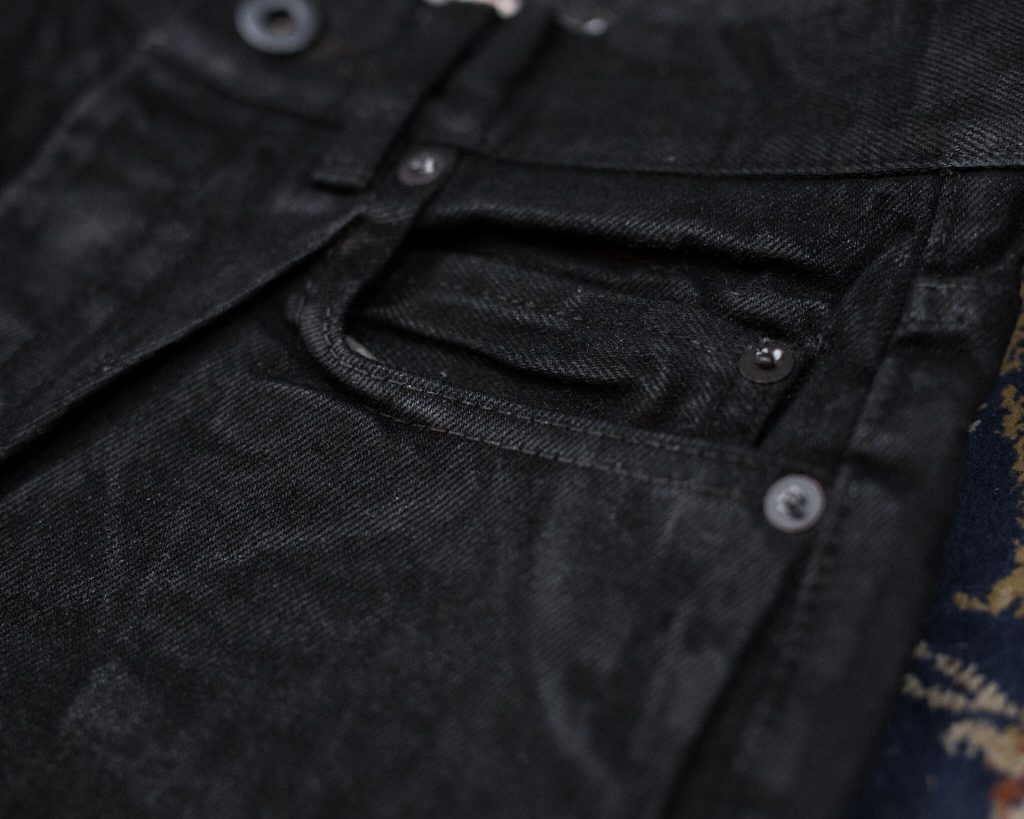 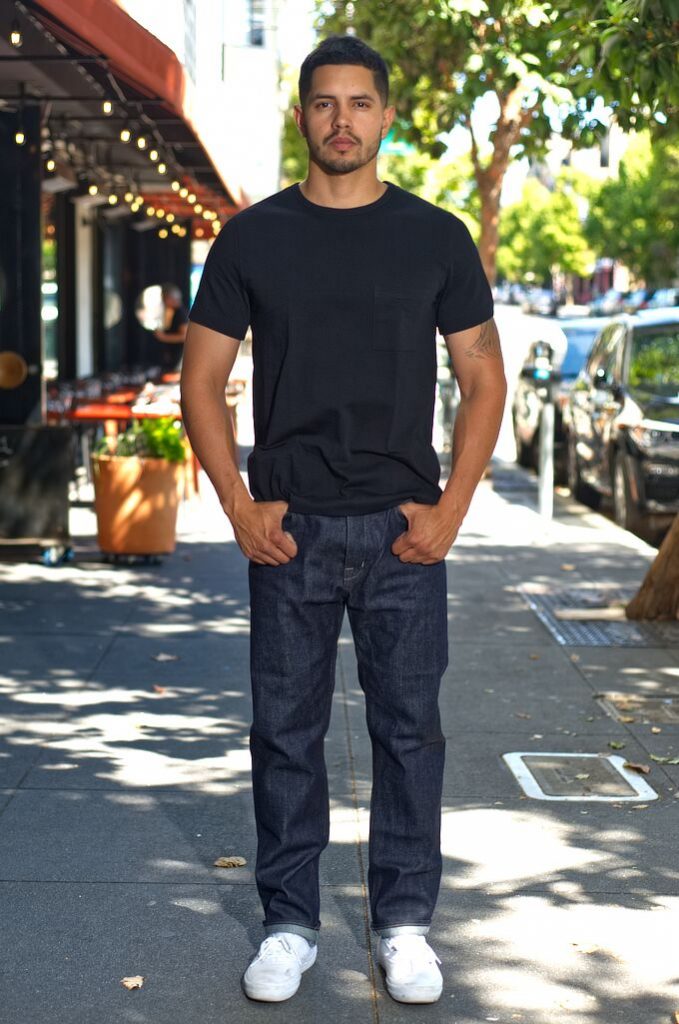 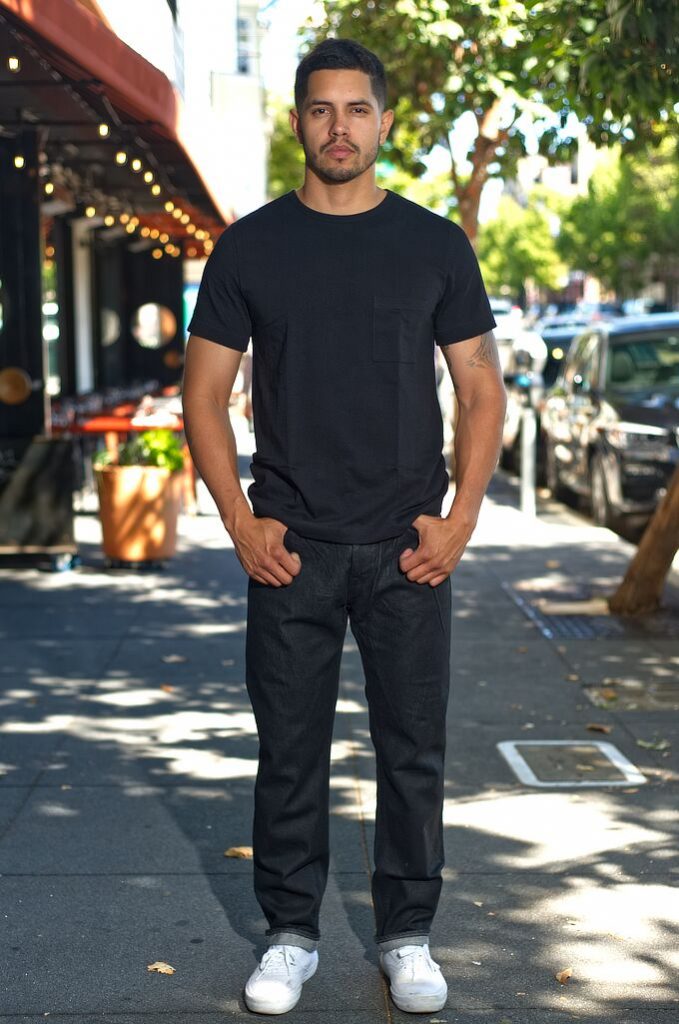 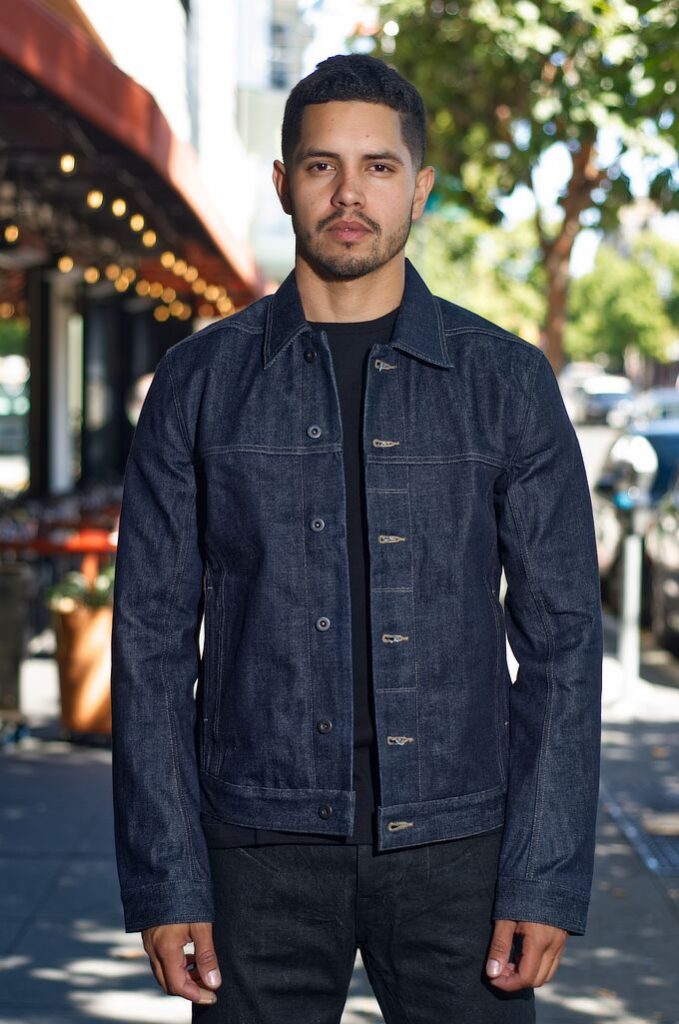 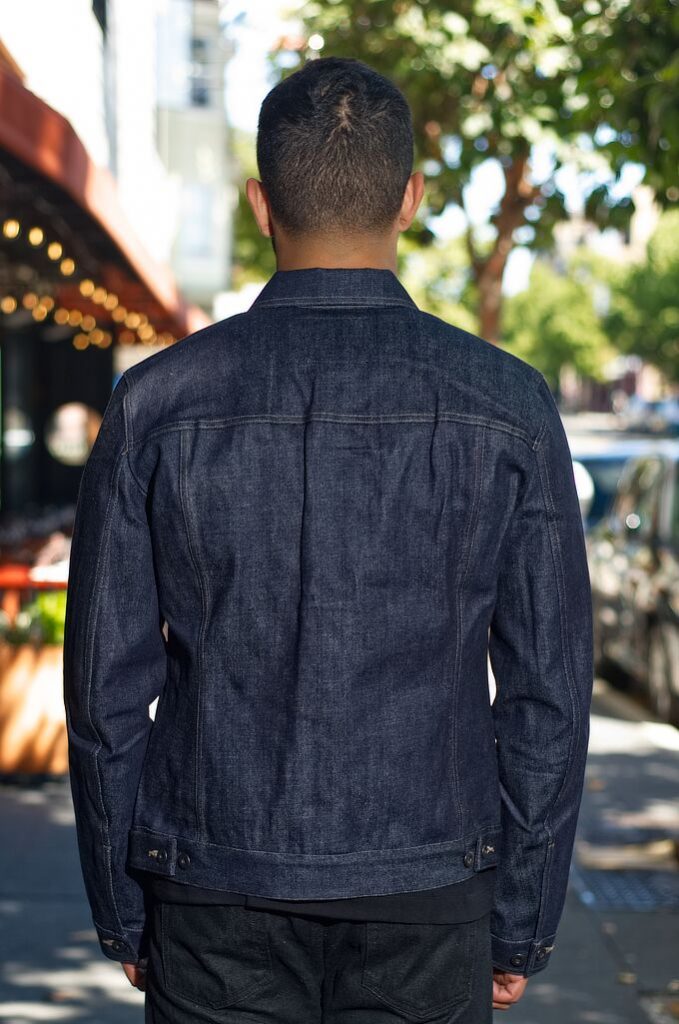