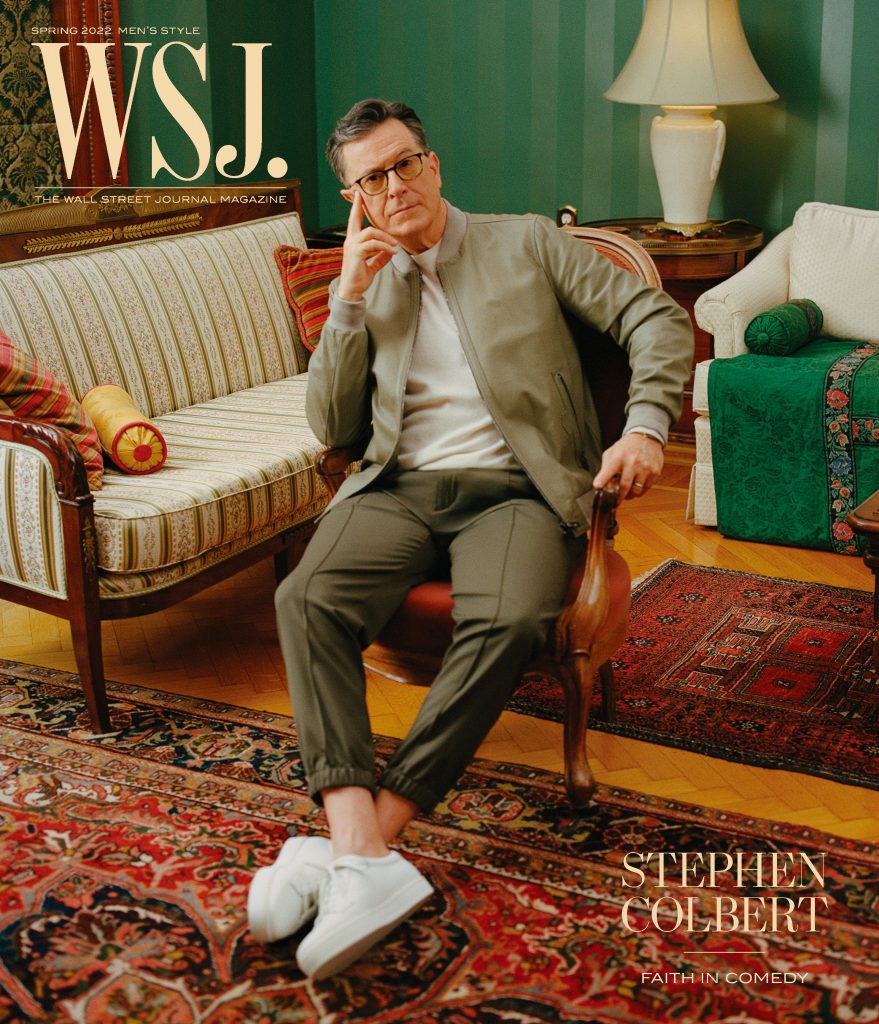 There are a million guides nowadays on how to dress for your body type or occasion. The longer I write about men’s style, the more I think people should dress for a vibe.

The term “vibe” has become such a cliche in culture writing (e.g., vibe shift), but it captures some of the things I’ve tried to communicate over the years. And why I think Stephen Colbert, who usually is well dressed, looks bad on the latest cover of Wall Street Journal Magazine.

Dressing for a vibe means being sensitive to the emotional and social message you’re sending out. We’ve long stressed the importance of thinking about clothes as language. When guys start to pay attention to how they dress, many think about it in terms of artistic expression. They hear that blue pairs well with white, or green doesn’t look good next to purple. Hence all the color charts online about how to create pleasing combinations.

But a good outfit is more like social language. To create a good outfit, you have to be sensitive to various cultural signals. At the most basic level, this means thinking about how to dress for an environment or occasion. On a higher level, it means being interested in culture and thinking about how various social groups have dressed in the past and present. You don’t have to go into full cosplay (unless you want to), but knowing about 1960s Ivy Style, ’70s sleaze, ’80s Armani, rebellious punks, ’90s minimalism, and so forth can help you think about how to create sensible, coherent outfits that are culturally legible. Think about style as writing a sentence, not throwing paint on a canvas.

The other part, and not often discussed on menswear blogs, is how grooming connects to your outfits. Some hairstyles fit better with certain outfits than others. If you wear eyewear, specific styles may also help finish a look.

In the photo above, nothing makes sense. Colbert is in an opulent room with Persian rugs, 19th-century furniture upholstered in jacquard fabrics, and a rich tapestry in the background. He’s an older man with square eyewear frames and an even squarer hairstyle. And the stylist dressed him like a 2015 menswear influencer — a sleek bomber jacket, luxurious joggers, and the minimalist pièce de résistance, all-white sneakers. There’s clashing everywhere: his outfit, the room, his hairstyle, and the eyewear. Even if the clothes technically fit him, they don’t fit his vibe. 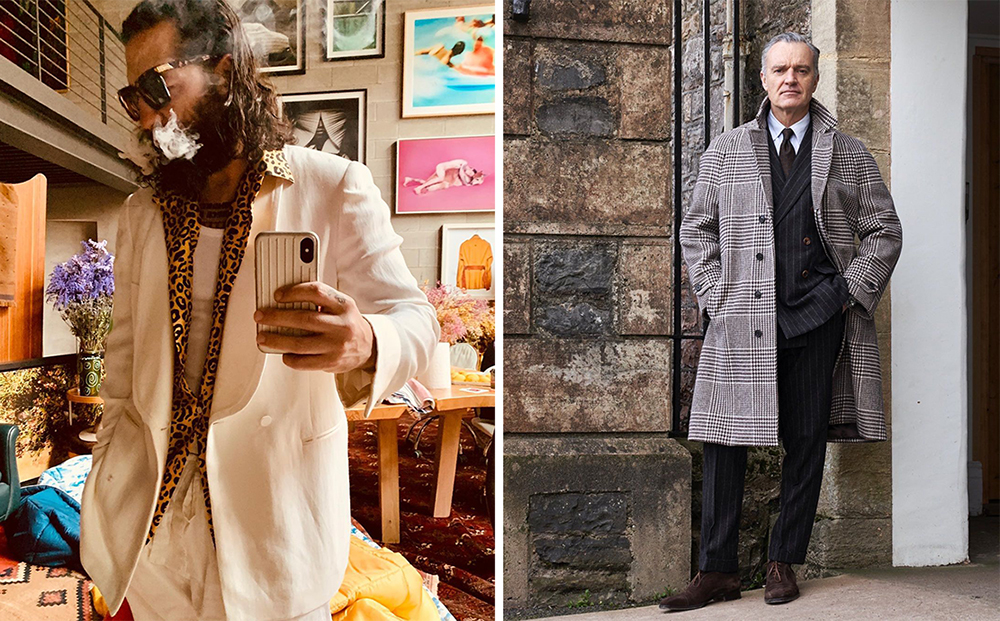 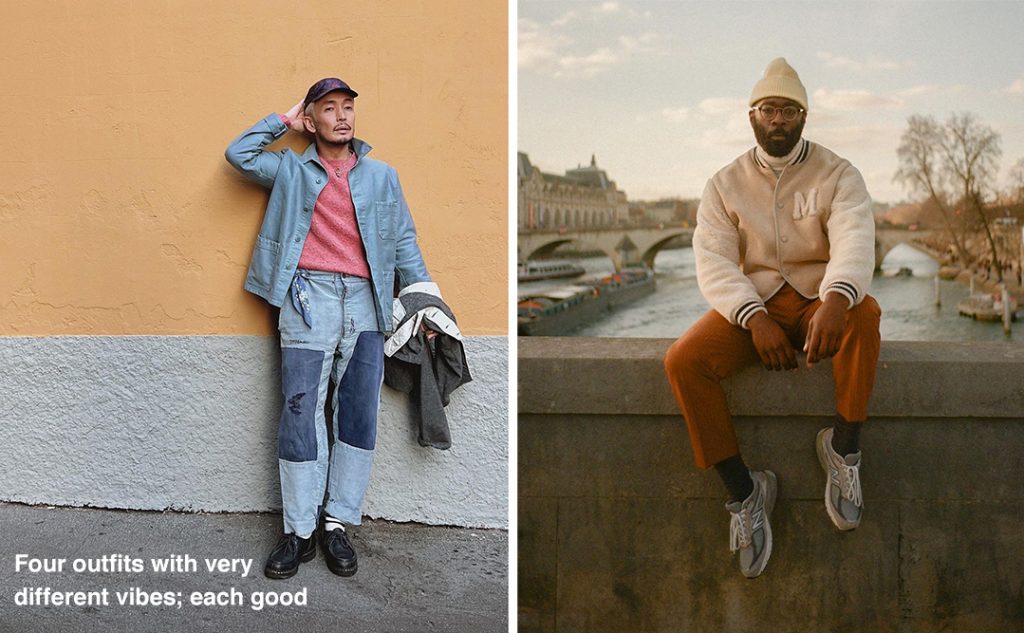 Every once in a while, a fashion publication will miss the mark like this, I assume because different departments are handling different things. You have a team of people who manage the editorial (the interview subject is often a celebrity), the advertising department that secures the clothes (because you have to advertise clothes), and then the stylist who puts the outfit together. Along with that, you have a photographer who sets up the shoot.

This is why so many celebrity shoots come out looking awkward. True, many are beautiful people, so they get away with it. But they still look like mannequins modeling clothes given to them. Nothing is coherent — there is no vibe.

For Colbert’s outfit to work, it would help if he was put in a stone grey minimalist room and if the hair and make-up people gave him a different hairstyle, possibly also glasses. The other problem is that we already know Colbert’s personality — a dry-humored comic who parodies buttoned-up conservative commentators. His hair, glasses, and dark worsted suits on his show perfectly convey that vibe. This minimalist jogger outfit does not.

Everyone has a natural kind of vibe. Your vibe is your personality, how you move, speak, and interact with the world. It’s your natural disposition. Finding your style is partly about connecting your clothes to this vibe. A few months ago, I interviewed Marco Martinez and Mitchell Moss, who have dramatically different personalities. Marco is a dancer who loves riding his motorcycle and attending warehouse parties in Los Angeles. Mitchell lives a quiet life just outside of Nashville, where he raises a family and works for a church organization. Both guys dress well for their vibe — Marco wears Kapital, Bode, and Engineered Garments; Mitchell wears soft-shouldered sport coats and Italian-Americana menswear. Even when you speak to these guys over the phone, their vibe is inescapable.

Dressing for a vibe doesn’t mean you have to dress according to stereotypes. You might be a quiet, shy person who loves wearing rock ‘n roll styled double-riders and black jeans. The dissonance between your clothes and personality can be its own kind of style (sometimes this works, sometimes it does not). Or you might just like wearing things because you want to feel a certain way. Rugged clothes such as workwear can make you feel emotionally protected from the world. And so, you’re dressing for yourself, rather than others. You can also dress according to different vibes depending on how you feel for the day.

Thinking about vibes can help you pull an outfit together. It connects you to the social and emotional language of clothing, and gets you away from the rigid rules that put everyone in a cookie-cutter uniform. Lots of guys dress perfectly according to the rules — sometimes mimicking 1950s Italian tycoons or 1960s Ivy students — but the outfits still never look quite “them.” This is the disconnect between a person’s outfit and their vibe. Rule-bound dressers are often good at wearing classic tailored clothing, but get lost in casualwear, which is very vibe-driven.

Here’s an easy way to think about this: imagine yourself as an actor or actress. Given your disposition and physical features, what kind of roles would you get casted in? How would the costume department dress you for that role? How would the hair department do your hair? Costume designers are highly sensitive to how clothes can communicate something about a character before that person opens their mouth. Dress for that role — or a vibe.

Filed Under: Dressing for a Vibe, Stephen Colbert, The Wall Street Journal