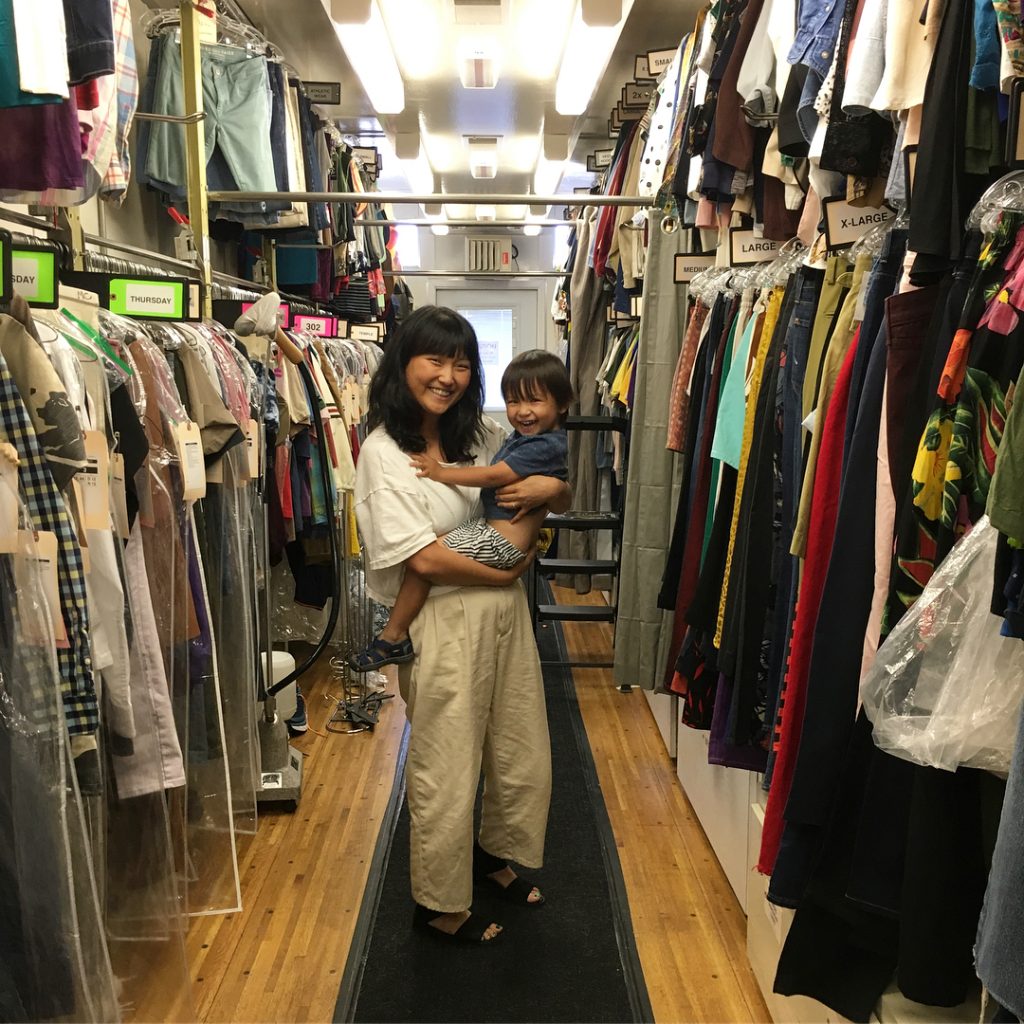 Most people need years to build a good wardrobe. Keri Langerman does it in a matter of hours. On a Friday night, Langerman, a costume designer based in New York City, got a call from her director about a project she’s working on. An actor was just cast for the leading male role and was scheduled to fly out to see her the following morning. Langerman needed to pull his entire film wardrobe together, less than 24 hours after confirming his identity, and she didn’t have any of his sizing information.

“You’d think you’d be giving this kind of information, but it’s not always provided for these sorts of projects,” she laughs. “When that happens, I look up photos of the person online and try to guess their size. Then I buy things that are a little bigger, with the expectation I’ll need to tailor them down later. It’s like trying to hit a bullseye — you’re more likely to hit your target if you shoot a million arrows. That way, when the moment comes, you can pull out fourteen cinematic outfits.”

Langerman has been working as a costume designer for over a decade. She’s dressed leading Hollywood men such as Robert Redford, Jude Law, and Jeff Goldblum. She’s worked on the costume teams for Moonrise Kingdom, Inside Amy Schumer, and most recently, Vox Lux. Each project comes with its own challenges, like having to dress an invisible body, but her process always starts the same way. She reads a script for emotional language and keys in on the mood, and then tries to reflect those tones through her costume choices. As she puts it, it’s about making the characters memorable for an audience. “There’s a lot of mood boarding,” she explains of the process. “We’ll research photos, both historical and contemporary, and try to express a character’s mood through their clothes. Sometimes it’s about staying true to a historical era, but sometimes it’s also just about expressing an idea.”

Langerman’s last film project, Vox Lux, is about a character named Celeste (played by Natalie Portman) who survives a high school shooting in Staten Island, where the shooter leaves a sickening and macabre arrangement of the dead and wounded. Celeste writes a eulogistic song with her sister (Stacy Martin), which becomes a national sensation, catapulting her into fame and, later, transforming her into a rockstar. The film alludes to real-world tragedies, such as the Columbine High School massacre and 9/11 terrorist attacks. And as Celeste grows into her role as a celebrity, she’s increasingly portrayed as impulsive, unstable, fragile, angry, and trapped at the emotional age when she first became famous. The film is dark and swirling — and the costumes underscore those emotions. 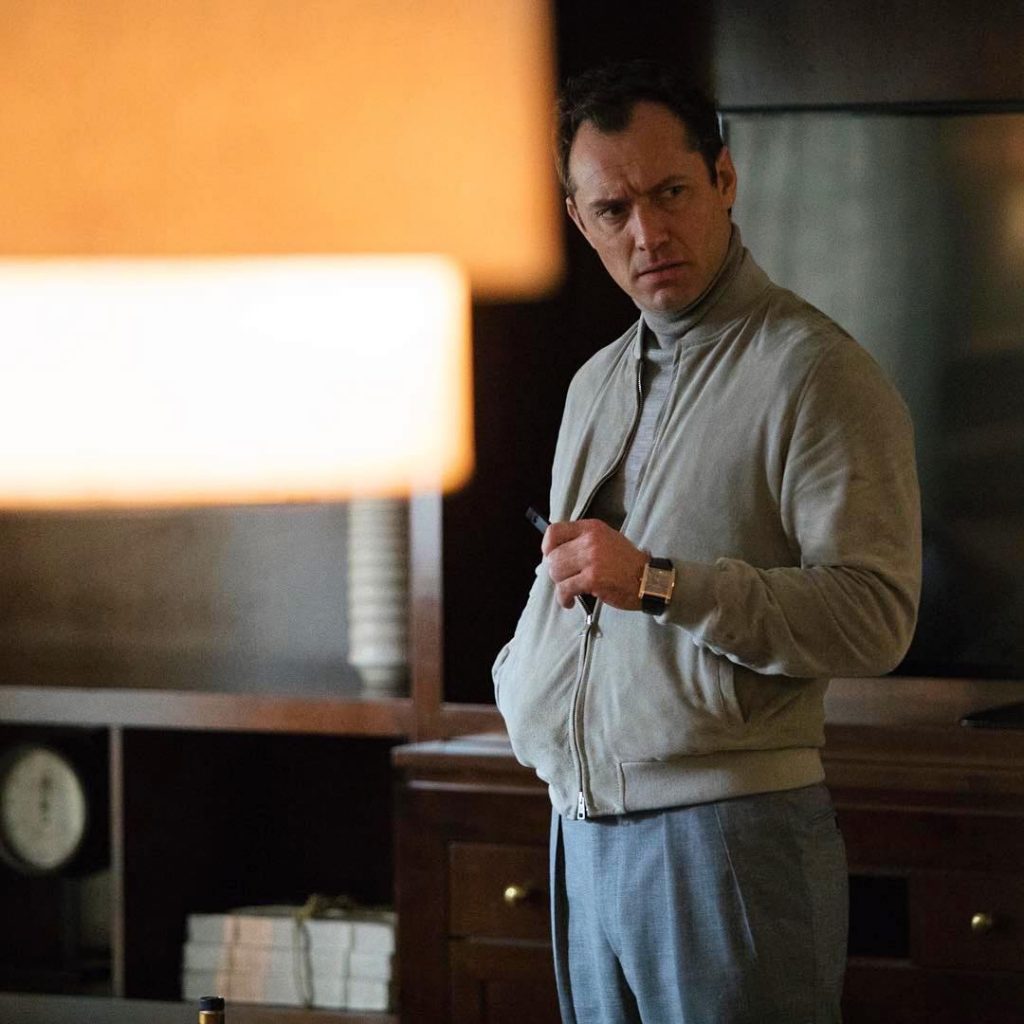 “The film is divided into two acts, and while the acts are rooted in a certain time period, the director and I wanted the clothes to be more about the film’s mood,” says Langerman. “So we were careful to choose outfits that felt relevant to the period, but weren’t necessarily a statement about the period. We wanted simple, classic silhouettes, but lots of darker, moodier colors.”

For the first act, Jude Law, who plays Celeste’s hovering manager, wears five-pocket jeans and Members Only style jackets — a racing style that’s distinguished by its narrow collar band, epaulets, and knitted trims. The style was popular in the 1980s among music fans and club goers. “For the first act, a lot of Jude’s clothes came from eBay, Etsy, and consignment stores,” says Langerman. “We wanted a Members Only style, but not an actual Members Only jacket. Basically, something that someone back then may have worn if they couldn’t afford the actual brand. Then we pulled that same silhouette through to the second act, where he’s wearing a Valstarino jacket and Eidos trousers. We wanted to keep the silhouette the same to remind the audience that he was still the same character — his career just advanced, so he had a bit more money and dressed up a little more. It was a conscious decision to not completely change his wardrobe, but to just change the color and quality of his clothing.” (Notably, Law’s monochromatic style, pictured above, was inspired by Cary Grant’s famous gray flannel suits).

I ask Langerman if there are things she keeps coming back to when dressing male characters — tried and true items that seem to look good on everyone. Aside from dark jeans, she struggles to find a theme. “I think almost anyone can look good in a Valstarino,” she says. “I’m currently working with Lakeith Stanfield and I would love to see him in a Valstarino, but I don’t want to repeat the same outfits. I want to stay true to the character and the script. Sometimes you think ‘oh, this brand works and I love this shoe,’ but you want each character to be special.”

Langerman pulls a surprising amount, however, from in-the-know menswear brands. Jude Law, as mentioned, was dressed in a Valstarino and pair of double-pleated Eidos trousers (the second of which were specially made for the film by the Isaia factory). Jason Segal wore a double-breasted, shawl collar cardigan from Inis Meain for his role in The Discovery (“I was looking for sweaters that were rich in color and texture; pieces that were cozy, breathable, and easy to wear. I considered putting him in a sports coat but when I found this cardigan I knew it made more sense for his character,” she wrote on Instagram). And Langerman put Robert Redford in Epaulet’s trousers. “We wanted a custom order, but it was a four-week turnaround and we only had one week,” she says. “But I knew it had to be those pants — they had the perfect rise and cut throughout the leg, and the fabric was just great, so we had our tailor do the alterations on-site.”

How does a costume designer know about these obscure brands? Langerman says she follows StyleForum and certain online boutiques, such as No Man Walks Alone. The forums give her an important consumer perspective, so she knows people’s experiences with clothes and doesn’t see things through rose-tinted lookbook glasses. “A lot of this is about finding people who know more than me and have great taste,” she admits. “Then mix it all together for a character. When I’m dressing a man for a film, I also like to dig a little deeper to reach that style enthusiast who may be in the audience. But it’s a constant process and I’m always searching. Sometimes I fall asleep scrolling through my phone.” 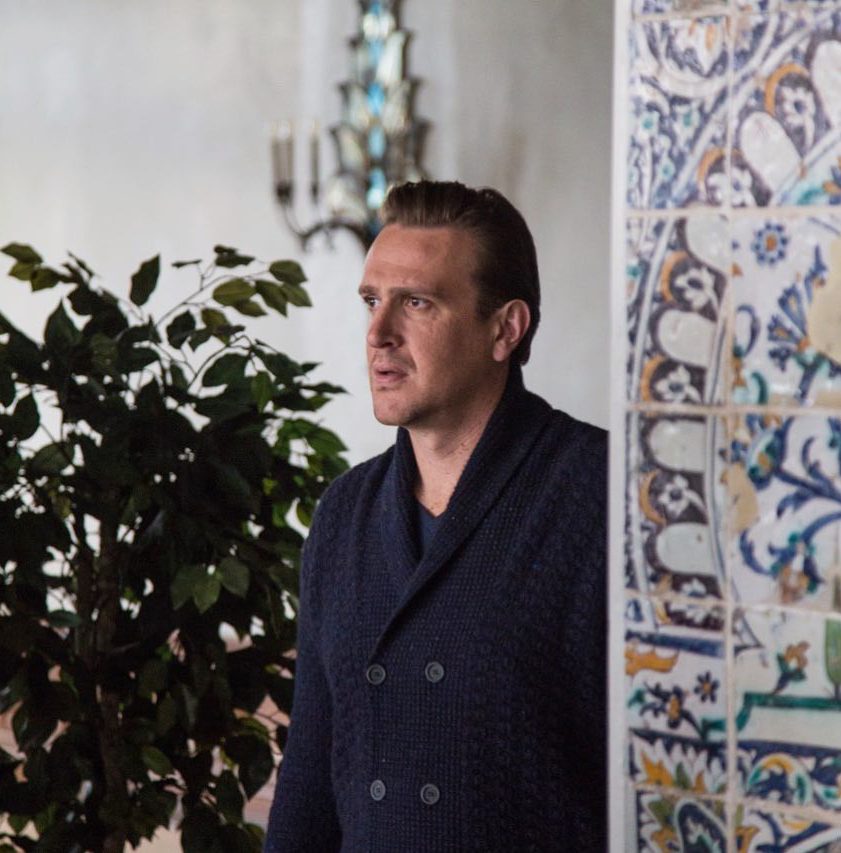 How to Dress Yourself as a Character

As a costume designer, Langerman knows how to communicate a character’s story and personality through their clothes. That skill isn’t limited to just dressing actors for films and TV shows, however, it can be pulled through into everyday life. We ask Langerman how she feels about certain style-related topics.

“It helps to think about your body type when dressing, but I also think it depends on what you’re dressing for. Dressing for your body type can mean one thing for the office, but another thing for weddings or weekends. In the US, there are certain rules for how you can look what we consider to be traditionally ‘better,’ whether that means looking slimmer, taller, or more ‘masculine.’ There are certainly options out there that will check all those boxes, but some of the most stylish men also don’t wear traditional silhouettes at all. Those are more avant-garde aesthetics, but they may reflect the person better.

It’s the same with skin tone. Generally, you want a bit of contrast between your clothing and skin tone. That will make you look what’s traditionally considered to be ‘good.’ However, I love a good monochromatic look. I love wearing a t-shirt in a similar color as my skin tone, which most will say ‘wash me out.’ But that might be closer to how I want to present myself for a day — it shows how I’m feeling and who I am. I think the rules are good if you want a traditional look, but you can’t pin it to just rules.”

Developing a Personal Sense of Style

“I think the key is to focus more on how clothing makes you feel, rather than just how it makes you look. Wear clothes that you feel represent a certain side of you. As human beings, we have so many different sides, so you can wear a beautifully tailored suit to work, but also hemp pants on the weekend if that’s who you want to be. I can tell immediately when something works on someone at a fitting — their mood and posture change, there’s a hop in their step. Sometimes I think people get too hung up on, ‘oh I can’t wear green’ or ‘that’s not my style.’ But the more forgiving you can be about how you look, the more you’ll allow yourself to experiment with different brands and silhouettes, which in turn will allow your wardrobe to feel more personal to you. I find that’s when people are happiest with their wardrobe. 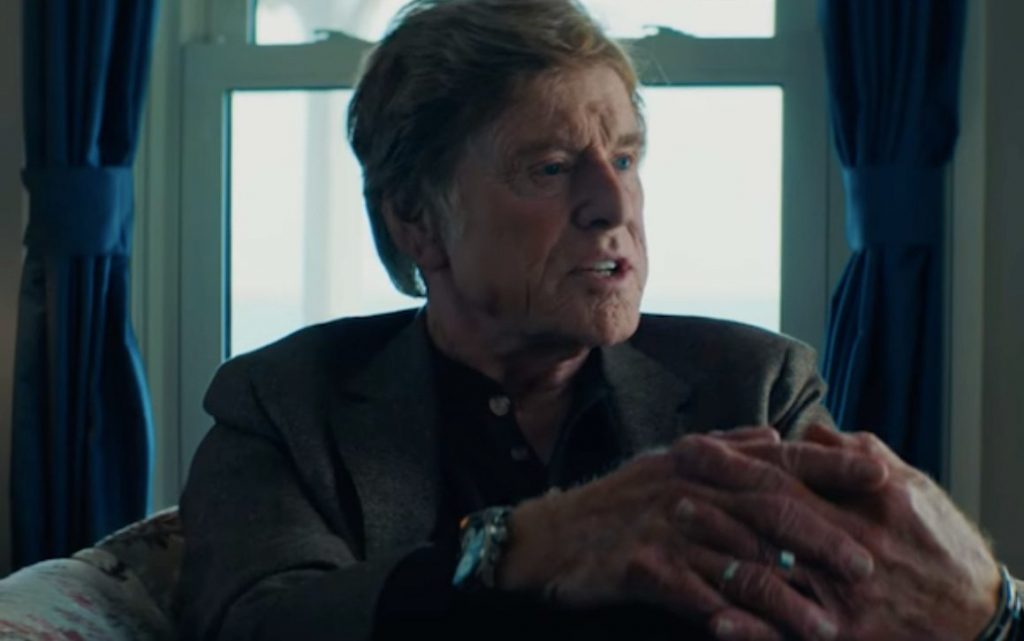 You also have to give things a chance. Whether you’re an actor or not, I think it’s difficult to change your silhouette and not feel like you’re ‘wearing a costume.’ Sometimes it takes a while to acclimate to a fuller jacket or a slimmer pair of jeans. At fittings, I’ll sometimes tell an actor to take a walk around the room before making a decision on something. You have to give something a chance to settle in. Just know that you almost always have to get things tailored. Tailoring is not expensive, you can go to your local dry cleaner.”

“You have to carve time into your life and put effort into it. Sometimes we have unrealistic expectations that just because something looks a certain way on a model, that’s how it’s going to look on us. Part of this is about processing someone’s body and personality through clothes, and there’s no one size fits all. Dedicate some time to going out and trying on different clothes, or ordering things online and be ready to return them. Even for actors, just because something works on a model doesn’t mean it works for someone on-screen. Until you try something on, everything is hypothetical.

It can help to pay attention to blogs, Pinterest, Instagram, etc. For me, it’s about finding new images and paying attention to how people are wearing things. Save photos you find to be inspirational. When you see how people are breaking the rules, you realize there’s no wrong way to do it.”

Dressing as a Character

“I think it helps to first break your wardrobe out for the various parts of your life. You can have your work wardrobe, weekend wardrobe, formal wardrobe, etc. If your wardrobe isn’t connected to a certain part of your life, you’re never going to wear it. Here in New York, our overcoats are like our cars in the winter time, so you know you need a good overcoat. This also helps you figure out what kind of personas you want to project for different settings.

Next, think about what kind of adjectives you would want someone to use when describing you. Would it be fashionable, avant-garde, or traditional? Then, when you look at a new piece of clothing, do those adjectives come to mind? If they don’t, are there ways you can wear it to help communicate those ideas? This can seem so basic, but when you’re out shopping for clothes, it can be easy to get led astray with all the options that simply ‘look good’ that you forget how to communicate those messages. Think about how you would want to be dressed if you were a leading man in a film.”