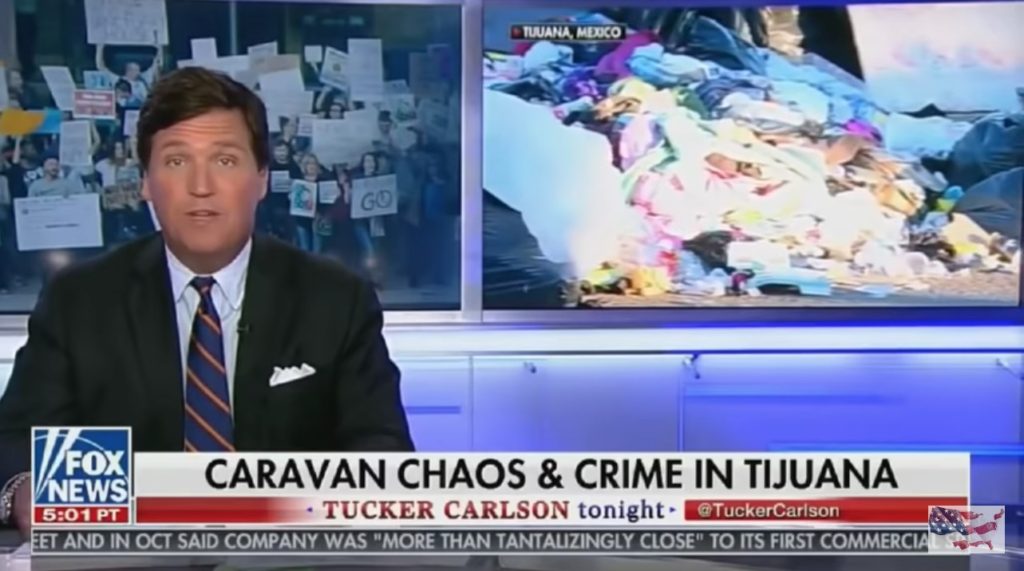 Tucker Carlson, whose name very much sounds like a belt brand, ran a segment last week on immigration. He opened his show by reassuring viewers that he likes immigrants. “Nice people, no one doubts that,” he said last Thursday, echoing President Trump’s comment about how he assumes some Mexicans crossing the border are good people. It’s how he ended that sentiment that has sent many advertisers scrambling. On they issue of immigration, Carlson said:

As an economic matter this is insane. It’s indefensible, so no one even tries to defend it. Instead our leaders demand that you shut up and accept this. We have a moral obligation to admit the world’s poor, they tell us, even if it makes our country poorer and dirtier and more divided.

The idea of the dirty immigrant has a long history in American politics. It’s a characterization that has been casted against almost every unwelcomed newly arrived group to the United States, including the Italians, Irish, and Chinese. It’s dangerous and dehumanizing, and carries such obviously racial overtones, it feels like a bit from this Key & Peele sketch. And Carlson’s usage of it hasn’t gone unnoticed. After the segment concluded, Fox News aired an ad for Pacific Life. The very next day, the insurance provider announced they’re suspending their relations with Carlson’s show until they can re-evaluate their next move.

A message from Pacific Life: pic.twitter.com/bDq9hzia53

Among consumers, this is playing out exactly as anyone would expect. Those upset by Carlson’s characterization are pushing for the remaining sponsors to pull out. Otherwise, they threaten, they’ll boycott. Those who support Carlson, on other hand, are threatening to boycott those who do pull out, and they’re calling on people to purchase things from Carlson’s remaining sponsors as a matter of patriotic duty. So far, a total of seventeen advertisers have fled, including IHOP, Land Rover, Bowflex, Sodastream, and Smile Direct Club.

One of the companies caught in this crossfire is Tommy John, a relatively new but popular brand of premium underwear. Among the many comments on Twitter, there are those who say they won’t buy Tommy John again until they pull their ads from Carlson’s show. Others lament the liberal bullies who, they say, are attacking free speech again.

To be sure, it hasn’t just been liberals who have boycotted. In September of last year, some conservaives burned their NFL jerseys and season tickets to protest players who kneel during the national anthem. This guy cut up his socks when Nike came out with an ad featuring Colin Kaepernick. Some called for a Levi’s boycott when the company donated to anti-gun-violence causes.

So far, Tommy John hasn’t made any public statements about the issue (we reached out to them for comment, but haven’t heard back). But this latest round of consumer boycotts represents the most intimate level of how clothes have been politicized in the last two years. Politics has touched almost every corner of the menswear market, from industry titans such as New Balance, Levi’s, and Nike, to smaller boutique names such as 3sixteen, Robert Geller, and Noah.

I surveyed members of Blamo’s Slack channel to see how they felt about the politicization of menswear, Tommy John’s advertising on Tucker Carlson’s show, and the current calls for a Tommy John boycott. One person, who asked to be anonymous, said he doesn’t think calls for a boycott are wrong, but personally doesn’t consider a brand’s political associations or behavior when making purchases. “I mostly think about quality and whether the factory workers were treated well,” he said. “I also question whether some companies are taking political positions because they’re being authentic or if they’re just trying to capitalize off a movement.”

Chris Dolan, who works in the tech industry, notes that we often buy things for their emotional appeal. If a brand is casted as being against your values, it’s hard to separate politics from the rest of the brand’s positioning. “People have an emotional connection to brands,” he says. “Ads are, by design, meant to communicate a message. When Nike choose Kaep to be the face of their ad campaign, they were obviously going to strike a chord with people who connect Kaep to everything either right or wrong about this country. As much as I try to stay away from petty reactions, like burning stuff I’ve already paid for, I’m also a sucker for a good brand story.”

Tommy John is unique in that the brand hasn’t taken any overt political positions, unlike Nike (with Colin Kaepernick), Levi’s (with gun violence), and New Balance (with trade policy). Instead the brand is being hit with guilt-by-association. Notably, the underwear company advertises on both liberal and conservative media outlets, such as the politically progressive podcast show Pod Save America.

“It does make me wonder, in an increasingly polarized world, if a brand can effectively appeal across that divide,” says John Reuter, who works in politics. “I think it’s interesting that Tommy John is trying to directly appeal on two very different partisan channels, particularly when Pod Save America ads tend to lean into a pretty direct values connection to their listeners. At the same time, there aren’t as many big tent advertising opportunities anymore. Personally, I hate to admit that this probably does make me less likely to buy Tommy John’s, although mostly because it diminishes one reason I might try a new brand: a belief in shared values.”

It’s an open question whether calls to boycott are sustainable. The ones around Nike, for example, fizzled shortly after. It’s also unclear where consumers will want to draw the line — are politics about a brand’s overt positioning, a top executive’s statements, or the company’s associations. Ultimately, any brand’s politics is going to be a lot more nuanced and complicated than what’s revealed in a single ad campaign (many brands, for example, donate to both sides of the political aisle in order to wield greater influencer over business-related policies). What gets politicized is often a political issue in and of itself.