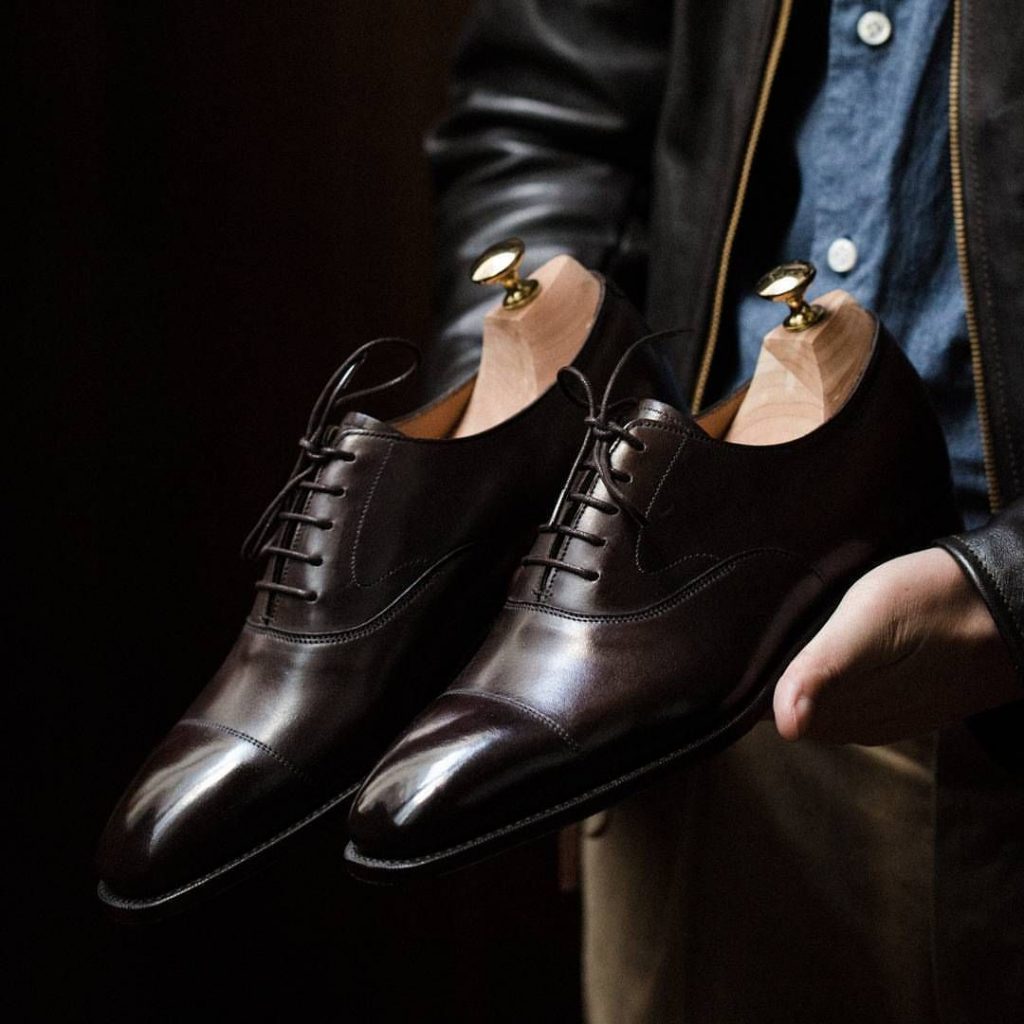 The Armoury doesn’t hold seasonal sales, but every retailer has to figure out what to do with unsold inventory. Once in a blue moon, they hold warehouse sales in Hong Kong and New York City, where you’ll find old season stock in odd sizes. They also occasionally offload things at their sister site, Drop 93. At the moment, you can find factory seconds of their house-line footwear there for just $307.

Mark Cho at The Armoury showed me some samples of his shoes a few years ago when he was just developing the collection. The design process started with an old wooden last Mark found in an archive. The original last was an almond toe, and he wanted something more shapely. So he gave the woodblock to bespoke shoemaker Yohei Fukuda. Fukuda, who’s known for his chiseled lasts, chipped away and sanded down the weathered last to get something more angular.

Mark tells me the last was inspired by mid-century racecars. The idea was to get a low-slung silhouette with sweeping lines blowing back to the shoes’ quarters. To compensate for the shallower profile, however, Fukuda needed to add volume somewhere. So he widened the ball of the foot to ensure comfort. And in doing so, he also made the shoes look like they were cutting in a bit closer to the shoe’s waist — that part of the shoe that sits between the ball and heel. Typically, this sort of shape is only possible in bespoke (ready to wear lines can’t do this because they need some wiggle room to fit a broader range of customers). You don’t get the same exact shape in The Armoury’s ready-to-wear line, but by playing with proportions, their shoes look a bit more shapely than things you might see elsewhere.

The shoes themselves are made in Northampton, England, home to some of the best footwear producers in the world. They’re Goodyear welted, made from full-grain leathers, and feature oak-bark tanned soles. They also have closed channel stitching. On a typical pair of Goodyear welted shoes, you can see the stitching that connects the sole to the welt. It sits in an exposed channel, which is sort of like a trench, that’s cut into the leather. But on a closed channel sole, the bottom is covered up with a thin piece of leather. The detail provides a tangible benefit in that it protects the stitching from dirt and water, but it’s mostly about aesthetics. Closed channel soles look cleaner and tidier. They also ultimately show a higher level of craft. 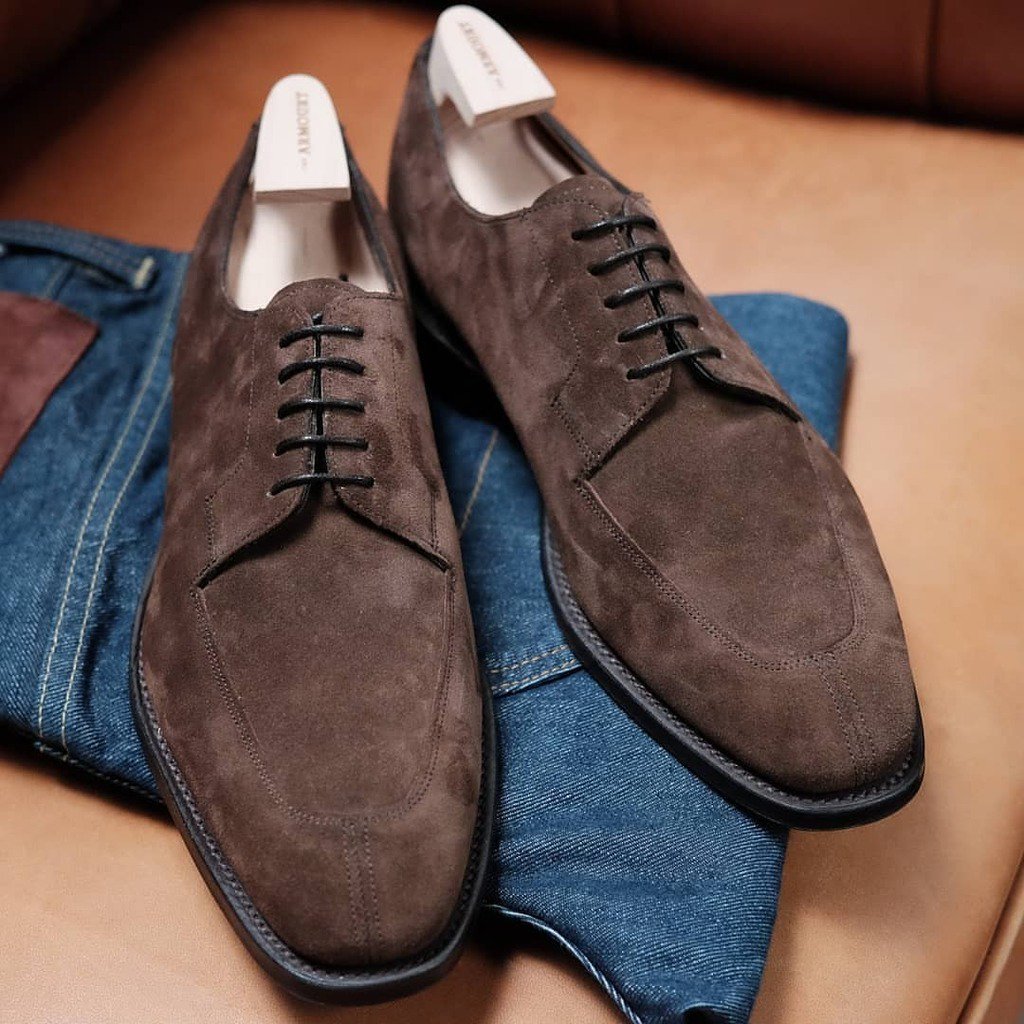 So, how do these compare to entry-level shoes? Well, for one, the closed channel stitching places them a bit closer to mid-tier lines such as Carmina and Crockett & Jones. I also think, as a whole, The Armoury’s shoes look better than your average pair of Allen Edmonds. They have a handsome, low slung profile and look sleek while remaining tasteful (too many sleek shoes look like pizza slices). The company also chooses easy-to-wear leathers in neutral colors such as mid- to dark-browns. Allen Edmonds’ leathers can run a bit warm in terms of color, which makes them difficult to pair with cool colored ensembles relying on blue and gray. Higher-end shoes, especially those from Continental Europe, can at times look a bit garish with painted patinas. The Armoury’s shoes are well-made and tastefully designed.

I also like that the last was designed by Yohei Fukuda, one of the more well-respected bespoke shoemakers in the world. Fukuda got his start in this trade in England, where he studied shoemaking at the Tresham Institute before moving on to work in the bespoke departments at G.J. Cleverley and Edward Green. He’s known for his soft chiseled lasts, which supposedly take after early 20th-century, high-society shoemaker Nikolaus Tuczek (something G.J. Cleverley likes to say, although the facts remain uncertain since Tuzcek also made plenty of almond toes). Plus, The Armoury is a great shop, and Mark Cho has an excellent eye for design. I particularly like the company’s Jubilee suede split-toes. They feature a machine-sewn apron, which is not uncommon at this price point. But The Armoury’s version looks so much better than other machine-sewn varieties. They’re an excellent value at $495 — even better at $307.

These are factory seconds, however, which means they didn’t meet the factory’s quality control standards. These will have some small imperfection somewhere, such as a tiny scuff on the uppers. But the defects are about cosmetics and shouldn’t affect the shoes’ durability or performance (first-grade shoes can be found at The Armoury). As for sizing, I’ve only tried The Armoury’s Hajime last, which they use for their lace-ups (the loafers are made on the new Jiro last). I find the Hajime to run true-to-size. The Armoury’s shoes are listed in UK sizing, which means you should size down one from your US size.

Filed Under: Drop 93, It's On Sale, The Armoury