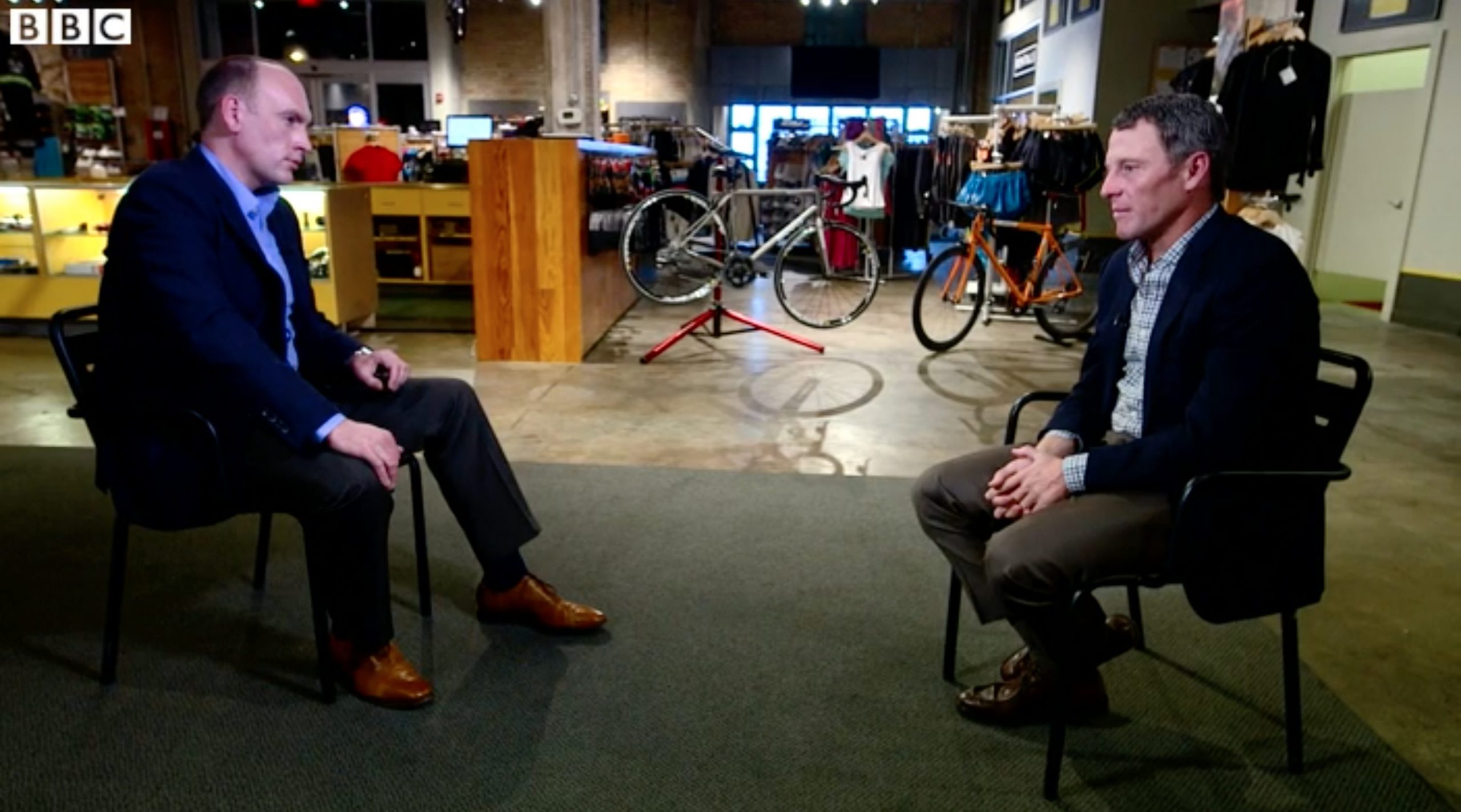 In 2015, Dan Roan sat down with Lance Armstrong for a BBC interview, which took place in Armstrong’s bike shop in Austin, Texas. This was Armstrong’s first televised interview since he admitted to Oprah Winfrey that he had been using performance-enhancing drugs. On this day, Roan showed up for the interview wearing a navy sport coat, light blue shirt, dark grey trousers, and tan oxfords. Armstrong wore a similar outfit, but instead of tan shoes, he wore dark brown.

The photo above shows one of the common pitfalls when wearing tan shoes. Roan’s outfit has two focal points competing for attention — his face and his shoes. His tan shoes shine out like a beacon from under his dark trousers. They’re a distraction and drag your eye downwards. On the other hand, Armstrong’s outfit is much more harmonious, such that no single item stands out. As a result, Armstrong’s clothes support him and keep your eyes centered on his face.

We’ve written about this issue in the past. Since many men nowadays buy their shoes online, it’s easy to get distracted by bright and shiny objects. Tan shoes stand out in a sea of black and dark brown options. Plus, it’s often said that well-dressed Italian men love wearing tan shoes with dark worsted suits (and who wouldn’t want to dress more Italian?). Although, I find that you’re much more likely to see this combination in the United States. Older Italian men — who are really the ones worth emulating — are much more likely to be found in conservatively styled footwear. 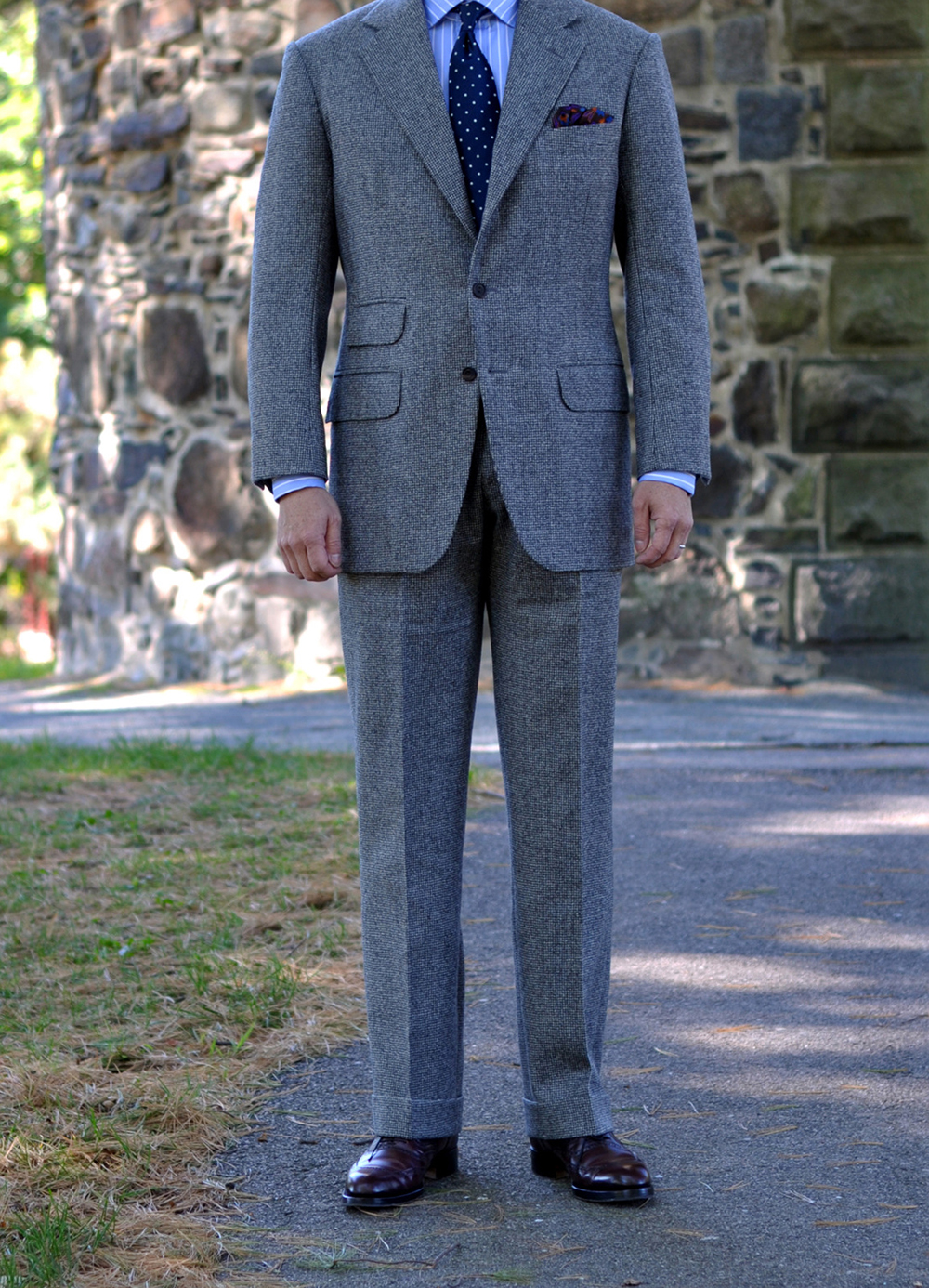 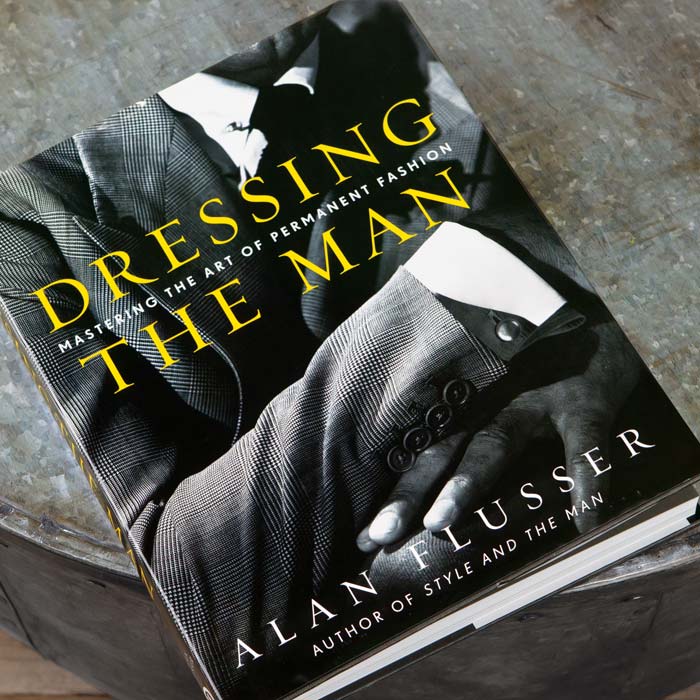 To wear tan shoes well, you have to keep two things in mind. First, remember that every part of your outfit should work together, such that no single item stands out on its own. You want to create harmonious outfits, not look like you haphazardly rolled through a pile of “cool stuff.” Secondly, remember that the focus of a tailored outfit is usually the v-shaped area that sits just beneath a man’s chin (in Alan Flusser’s books, he describes this as being the cynosure — a word I had to look up). This area is formed by your jacket’s opening, your shirt, and if you’re wearing one, your tie.

In his book Dressing the Man, Flusser writes: “The triangular sector formed below the chin by the ‘V’ opening of a buttoned suit jacket constitutes the cynosure of a man’s tailored costume. First of all, it is directly under man’s most animated feature, his face. Second, this triangular encasement is accented by contrasts between the darker jacket and lighter shirt, silken tie and dulled or matte shirting, etc. Again, keeping in mind that the face is the destination where one’s dress should be escorting the attention of the beholder, think of the face as a picture and what surrounds it as the frame.”

This is a long and complicated way of saying that your clothes should support you. When someone sees you, their eyes should be drawn upwards toward your face, not distracted by an unusual item or detail in your clothing. 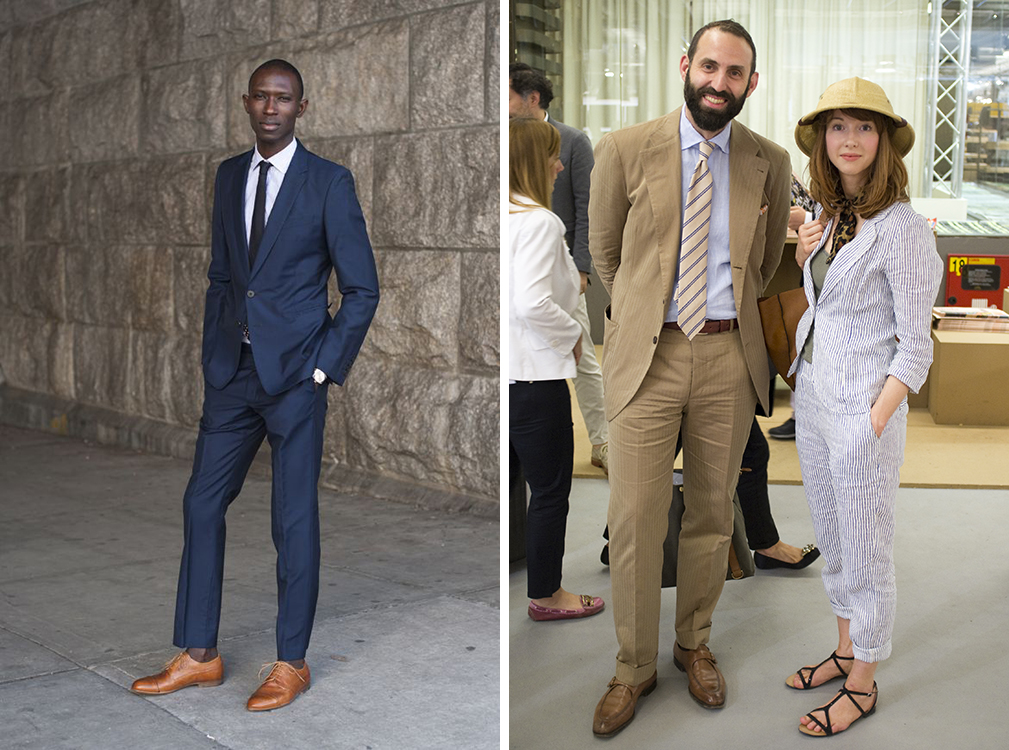 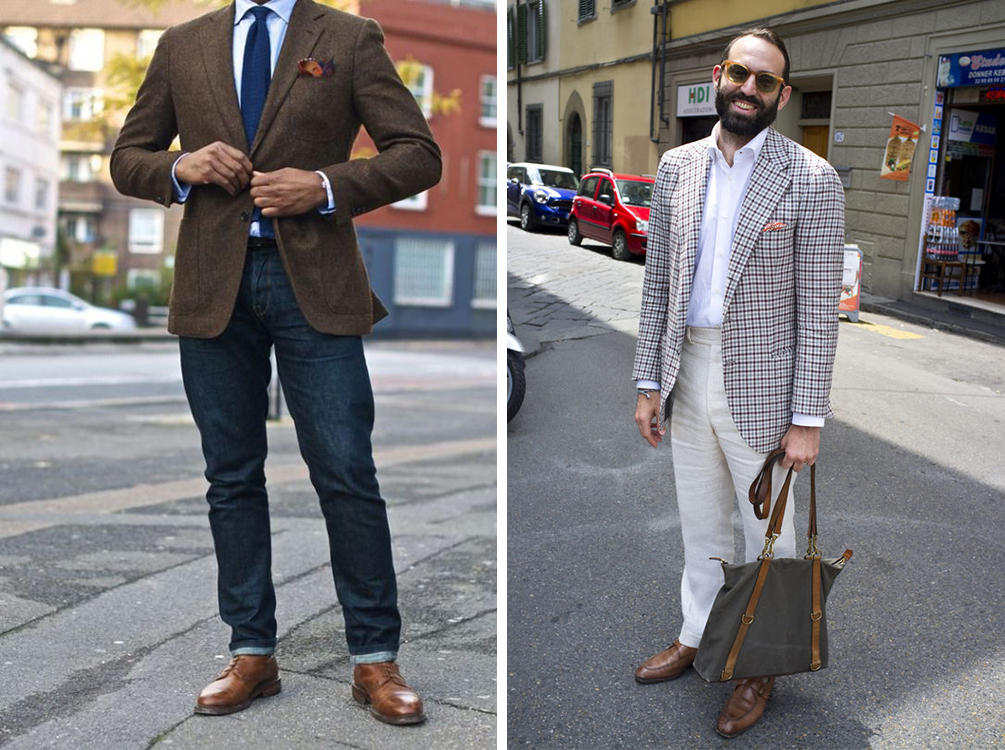 So how do you wear tan shoes well? Instead of wearing them with a dark-colored suit (such as the gentleman on the left), consider pairing them with a lighter-colored suit (such as the man on the right). If you wear tan shoes with a tan or pearl grey suit, it will be similar to wearing a dark brown or mid-grey suit with mid-brown shoes — just lightened up a few shades.

You can also do this with sport coats. If you pair tan shoes with a dark jacket and dark-colored pants (again, like the person on the left), the shoes end up screaming out for attention. Conversely, if you pair them with lighter trousers and a lighter coat (like the man on the right), everything looks a bit more harmonious. This works even if the trousers are still dark. By wearing a lighter-colored jacket, you help balance out the shoes.

In this way, your tan shoes don’t end up being a focal point. They simply work with the rest of your ensemble. It’s about creating a cohesive, sensible, and harmonious outfit — the opposite of choosing shoes that look cool, and then sticking them into an outfit. Online, you’ll often find guides about how to pair shoes with certain trousers, but in reality, you should consider the totality of what you’re wearing and what the combination communicates. It’s not just about how your shoes work with your trousers — it’s about how they work with everything. 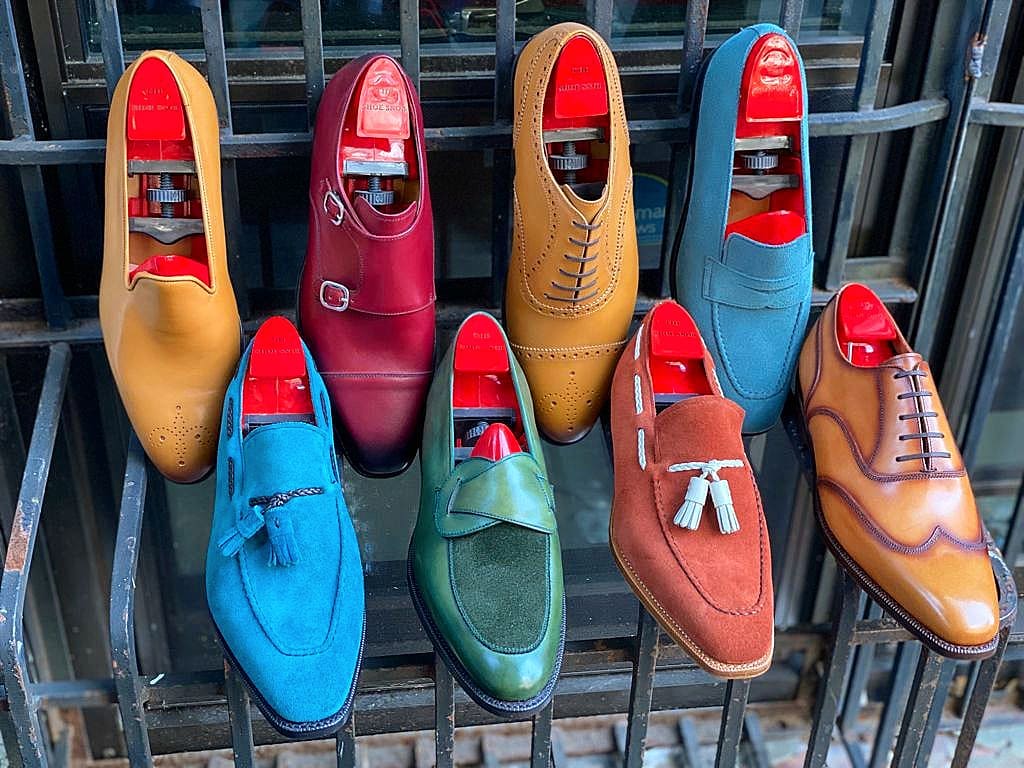 I should end here with three things. First, this isn’t just about color theory; it’s also about social language. Theoretically, a pair of dark blue suede shoes would blend effortlessly into a pair of navy worsted trousers. These two can be so close in shade and color that the shoes would almost look like an extension of the pants. But the shoes would stand out for another reason — they’re unusual. When you wear mid-brown shoes with a navy suit, the shoes visually disappear because they’re conventional.

This brings me to a second and related point. The growth of online “shoe culture” — supported by forums, blogs, and Instagram accounts — and the spread of online made-to-order programs have made it possible for guys to order stranger and stranger shoes. These are often traditional dress shoe styles, such as loafers, oxfords, and derbies, but made in unusual colors (e.g., green, red, or blue), materials (e.g., hatchgrain paired with suede), or details (e.g., Norwegian welts on loafers). These shoes sell based on their supposed craftsmanship and how good they look on Instagram (where they will fetch you “likes”). But they’re hard, if not impossible, to wear for the same reasons stated above: they catch the viewer’s attention and drag the eye downward. Watch out for these wailing sirens. If something catches your eye online because it’s flashy, it’s probably hard to wear in real life. Shoes aren’t supposed to be the center of attention in your outfit — they’re supposed to play a supporting role.

Finally, the above only applies to classic, tailored outfits. You may find the other aesthetics, such as streetwear and Westernwear, follow different types of norms. This idea of keeping the eye centered on the shirt, jacket, and tie is only really relevant with classic tailoring. For instance, I find that tan boots work wonderfully in Westernwear — perhaps better than dark brown or black, depending on the ensemble. As a color, tan sits well with faded blue jeans and communicates a tradition that evolved separately from classic tailoring. This idea of keeping your shoes subtle isn’t universal, but it’s a very good one to follow if you wish to wear tailored clothing in a more classic way.